Thomas Heatherwick tends to defy categorisation as a designer, as do his works. His UK Pavilion for this year’s Shanghai Expo, the truly remarkable Seed Cathedral (see Best New Public Building), melds art and architecture. His ‘Spun’ chair — originally created in copper and steel for Haunch of Venison using a metal spinning process that’s traditionally applied to drum-making, and then ‘respun’ in a rippled, moulded plastic version for Magis — looks more like an art installation than a chair. And his ‘Extrusions’ collection of aluminium benches, using aeronautical technology, is pure sculpture. Heatherwick Studio ‘exists to make extraordinary projects happen’.
“In the studio for the last 16 ½ years we’ve been trying to develop rather than a style, a system for thinking and developing new ideas. It’s less about singular moments of inspiration and me leaping out of a bath and sketching something–rather, I rely on a team of people where we work together and have a way that we focus our thought on a design issue or problem.”

The studio Heatherwick studio was commissioned to design a pedestrian bridge to span an inlet of the Grand Union Canal at Paddington Basin, London, and provide an access route for workers and residents.
Crucially, the bridge needed to open to allow access for the boat moored in the inlet.
The aim was to make the movement the extraordinary aspect of the bridge. A common approach to designing opening bridges is to have a single rigid element that fractures and lifts out of the way.
Rolling Bridge opens by slowly and smoothly curling until it transforms from a conventional, straight bridge, into a circular sculpture which sits on the bank of the canal.
The structure opens using a series of hydraulic rams integrated into the balustrade.
As it curls, each of its eight segments simultaneously lifts, causing it to roll until the two ends touch and form a circle. The bridge can be stopped at any point along its journey.

Heatherwick Studio was invited to draw up a masterplan for the entrances and approaches to Guy’s and St Thomas’ Hospital.
Drip-fed funding over recent decades has mitigated against the strategic development of the site, resulting in a hospital environment that at times feels fragmented and unwelcoming.
The new plan creates a more coherent system of vehicle and pedestrian access in and around the hospital.
The studio also addressed the hospital’s boiler house – a building adjacent to the entrance, identified by hospital staff as an eyesore.
By creating a new facade for the building, the boiler house becomes both a signpost for the hospital main entrance and a focal point for the site – visible fom pedestrian and vehicle approach routes, making the site as a whole more coherent and easier to navigate.
Much of the scheme consists of functional, pragmatic moves, which create space for a focal point, in this instance provided by Boiler Suit – a bespoke tiled cladding system wrapping around the boiler house.
Boiler Suit is fabricated from high grade stainless steel frames, with braid woven through as the “warp”. The 108 tiles are geometrically identical, with 17 variants required to accommodate specific junctions.
The tiles are a secondary façade system that is demountable and allows the machinery to vent through, whilst framed reveals shade the large windows on the south façade to reduce solar gain. 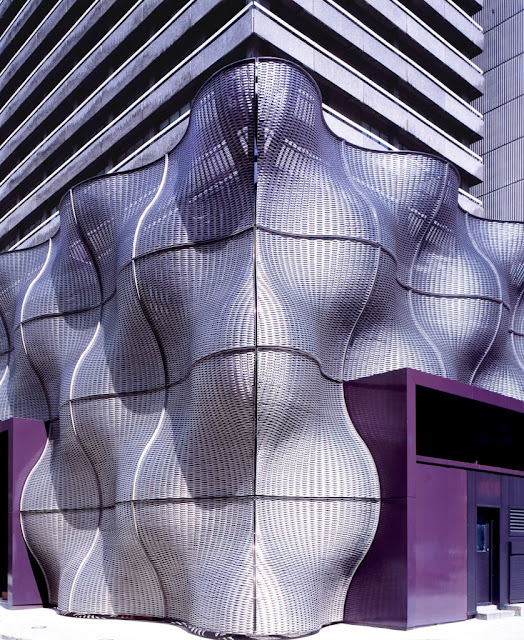 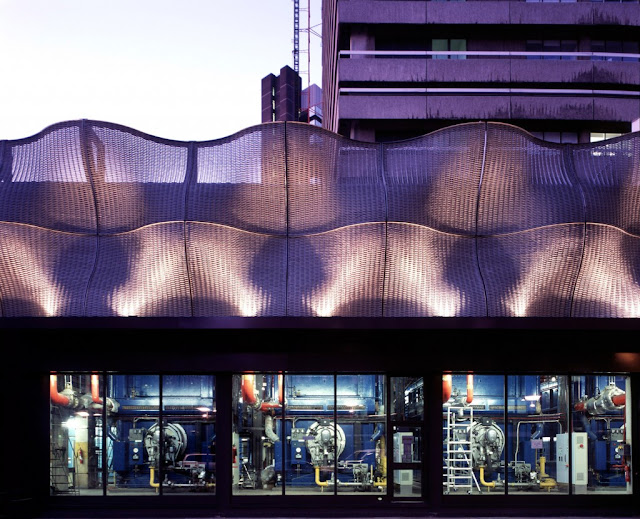 Heatherwick Studio was commissioned to design a café building to replace a seafront kiosk in Littlehampton on England’s south coast.
With the post-war rise in cheap package holidays having deprived the English seaside town of investment and downgraded many of them to cheap clichés, the studio’s client saw an opportunity to change this.
Mother and daughter team Jane Wood and Sophie Murray, both residents of Littlehampton, were keen to do something different that might begin to re-establish the importance of the English seaside town.
The studio saw the challenge as responding to the constraints of the narrow site by producing a long, thin building without flat, two-dimensional façades.
The envelope is sliced diagonally into strips which wrap up and over the building, creating a layered protective shell, open to the seafront.
The elevation looking onto the sea is fully glazed, protected at night by roller shutters concealed within the building’s geometry, the 30 centimetre width of the ribbons being the dimension of a shutter mechanism.
In contrast to the conventional white-washed seaside aesthetic, the building is raw and weathered, with the structural steel shell protected by a coating that permits rust-like patination to develop without affecting structural performance.
A kiosk and cafeteria by day and a restaurant in the evening, the East Beach Cafe seats sixty. 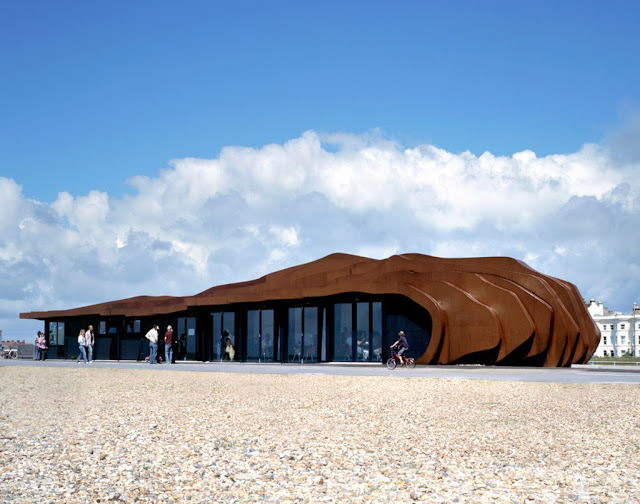 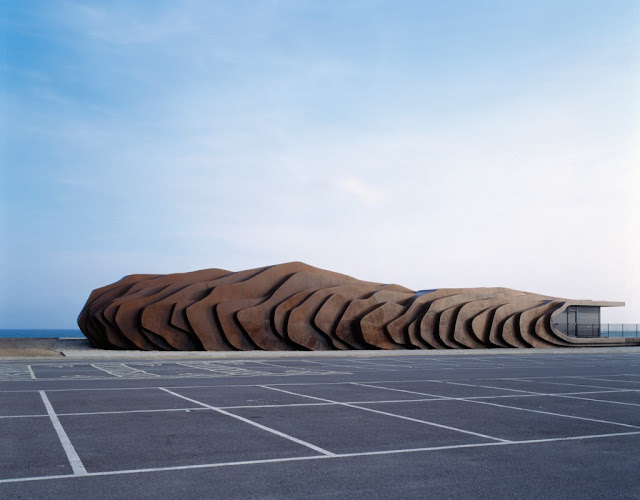 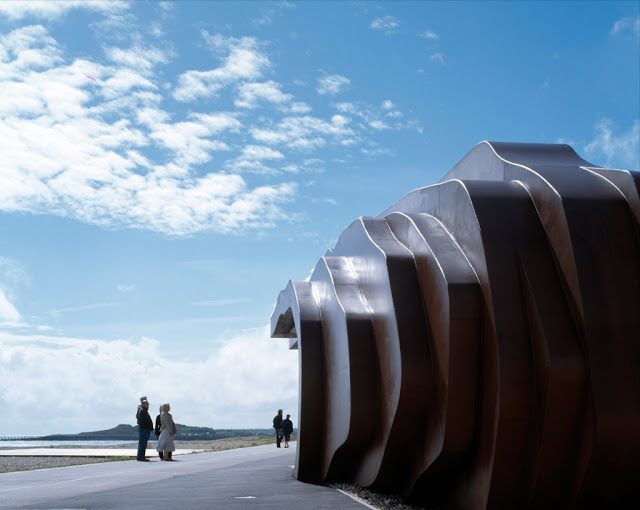 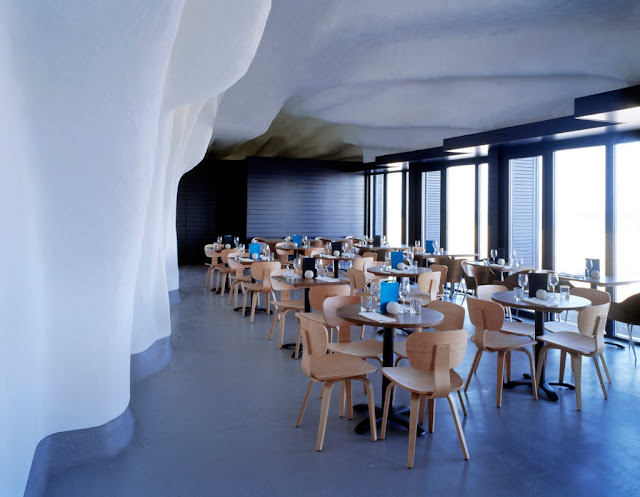 The studio’s design has three main aims: the first is to be a pavilion whose architecture is a direct manifestation of the content it exhibits; the second is to provide significant public open space in which visitors can relax; the third is to find a simple idea that is strong enough to stand out amidst the busy-ness of the hundreds of competing pavilions.
These aims are captured in two interlinked and experiential elements based around the subject of nature and cities – the Seed Cathedral, and a multi-layered landscape treatment of the 6,000sqm site.
The Seed Cathedral is a platform to show the work of the Royal Botanical Gardens at Kew and their Millennium Seedbank.
In the circulation zone under the landscape that surrounds the Seed Cathedral a series of installations explore in more detail the particularity of nature and UK cities.
The Seed Cathedral is a 20-metre high building, constructed from 60,000 transparent 7.5-metre long optical strands, each of which has embedded within its tip a seed.
The interior is silent and illuminated only by the daylight that has filtered past each seed through each optical hair. 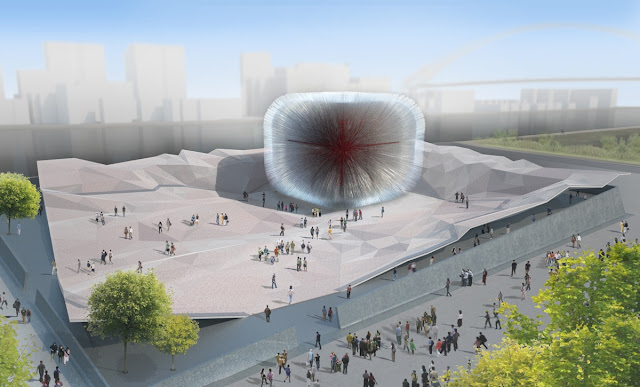 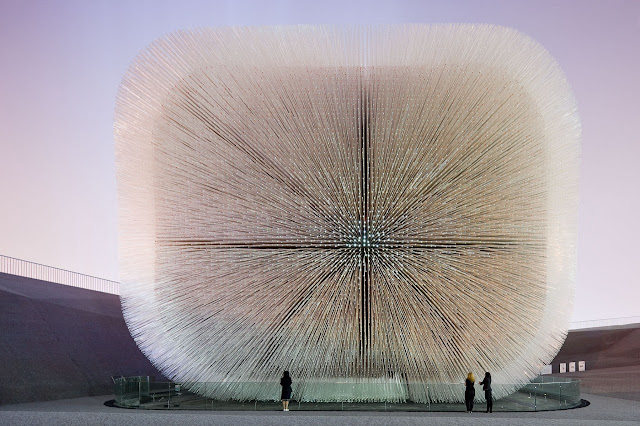 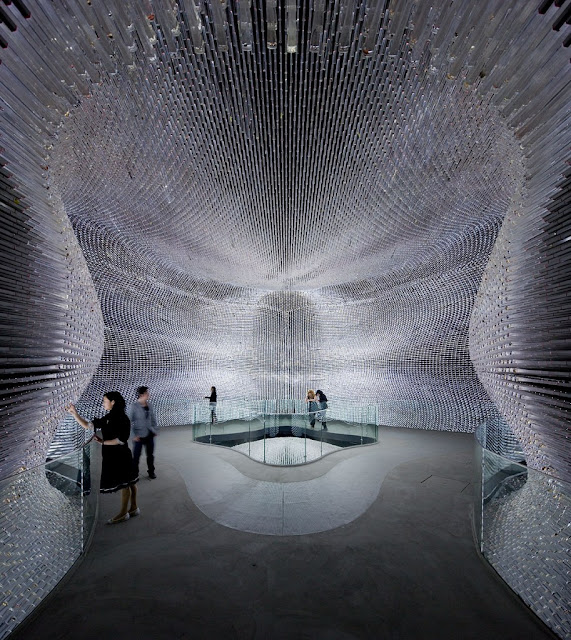 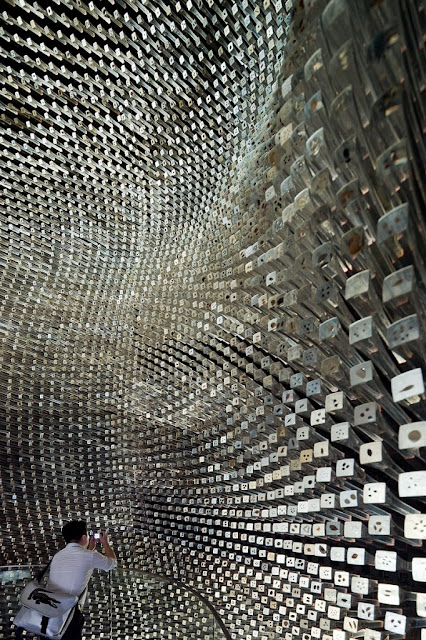 produced for London gallery Haunch of Venison, shaped like a spinning top, the chair is made of spun steel and copper.
You can easily change the direction you are facing by rotating the chair on its axis. The chair looks unstable but it’s actually is as stable as a normal chair.
The design is very simple and can be used in both indoor and outdoor. 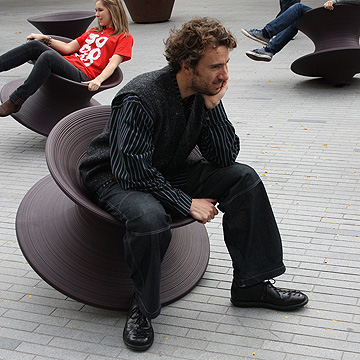 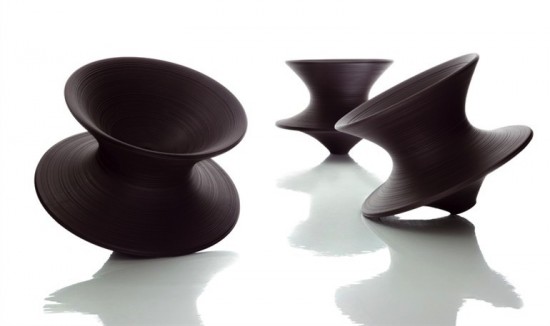