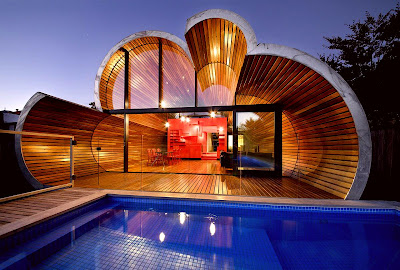 A shortlist is emerging in the 2012 Melbourne Design Awards, with a number of dazzling architectural and interior design projects set to compete for prizes.
Presented by design 100, the awards are open to any designer, design company, commissioner of design or student who is active in the Melbourne market.
Entrants include the Cloud House designed by McBride Charles Ryan (pictured). It is an addition and renovation to a double-fronted Edwardian-era home, the original structure retained with minimal modification, while a cloud-shaped extrusion as a dramatic extension to the living space, added at the rear of the property. 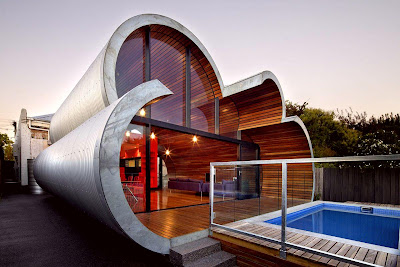 Picture info:
This is awesome house in Melbourne, Australia. This house was built by McBride Charles Ryan. The Cloud House is an addition and renovation to a double-fronted Edwardian house in Fitzroy North. For nearly a century, this house had several additions and changes. McBride Charles Ryan’s work for the house is designed in three parts. This allows a sequence of distinct and unexpected episodes, with glimpses preview controls mating surfaces and experiences as you move through your home.
The new living Moreover, facing due south while the north controlled the sun into the living room and provide effective cross ventilation. The form of the “cloud” is consistent with the setback rules, but that is obviously of them. Extrusion creates a dramatic decor language where the walls together seamlessly with floors and ceilings. The craftsmanship is remarkable throughout, it has a sense of care typically associated with the work of a Cooper or Wheelwright. While the geometry is playful, is extrusion essentially a modern barrel vault. It is our hope that this cloud has a “silver lining”.