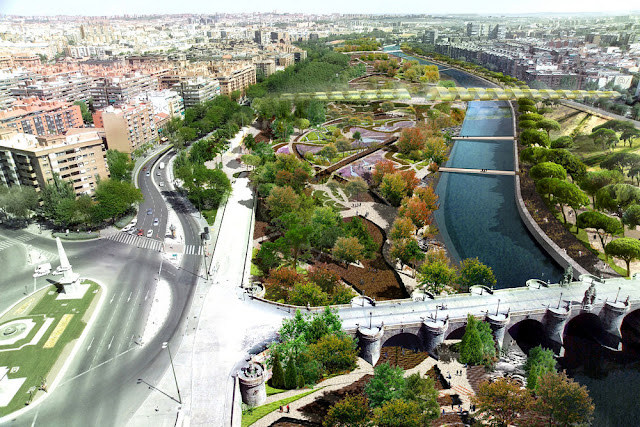 “The burying underground of the highway that ran along the edges of the Manzanares river provided the opportunity to open up a new urban territory to the inhabitants of Madrid: the Manzanares Park. 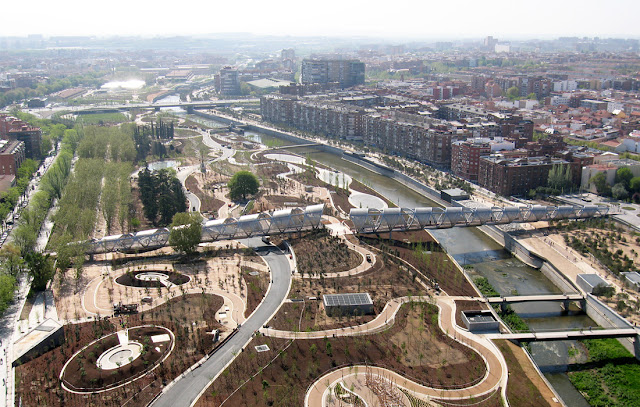 A series of bridges over the river will allow passage from one side of the park to the other. Designed to link the neighborhoods on the right and left banks of the river, the Arganzuela Footbridge is the longest of all the built bridges. 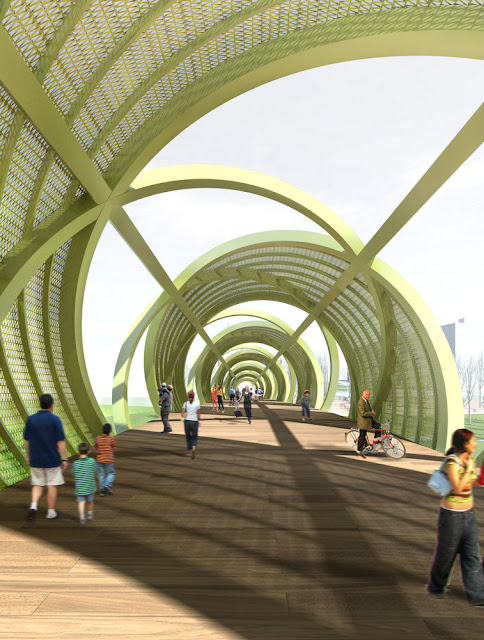 The bridge is for both pedestrians and cyclists. The footbridge enables people to cross from one side of the park to the other while also providing direct access to the park below. 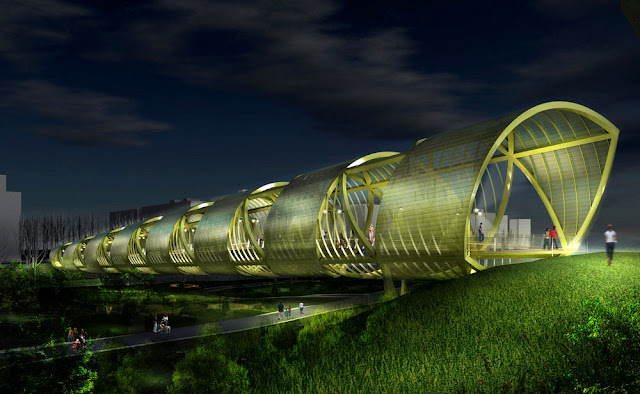 Cone like in structure, the bridge has two interlocking metal spirals, wrapped by a metallic ribbon. Spaced wooden slats make up the floor of the bridge, allowing the rays of the sun to penetrate through to the park below.

The cones’ geographic location creates a belvedere over the park and the surrounding city as well as an exceptional location from which it will be possible to admire the famous Toledo Bridge. Shaded during the day, the promenade becomes luminous at night.” D. Perrault

Forming a major element in the new urban strategy for the city named “Madrid Rio”, the Arganzuela Footbridge is already called “the jewel of the Rio” by the residents. 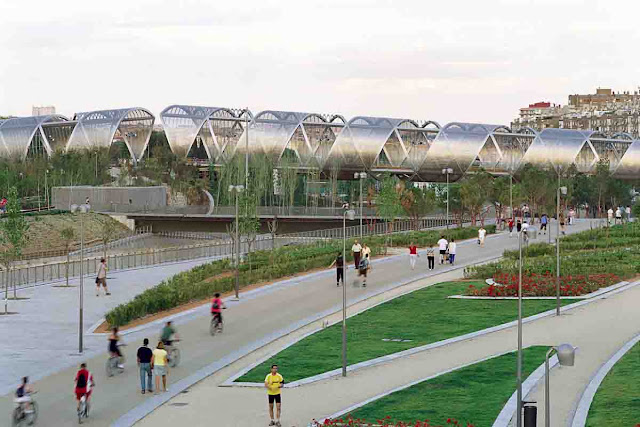 Over 270 meters long, the Arganzuela footbridge is located between the historic Toledo bridge and the Praga bridge which leads to the cultural centre of the capital. It links the Arganzuela and Carabanchel neighborhoods. 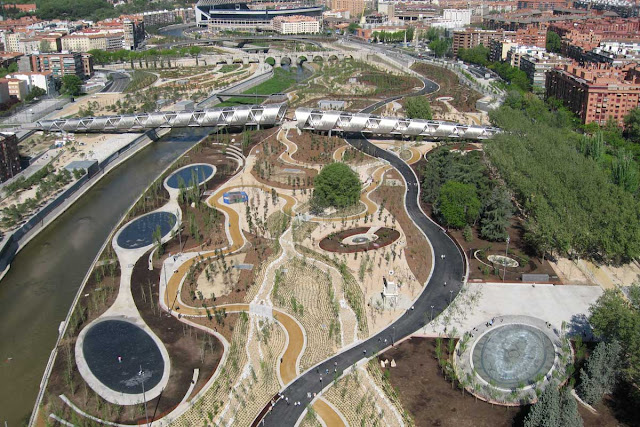 The Arganzuela Parc, which hides some of the buried highway’s technical infrastructures, has an irregular topography. 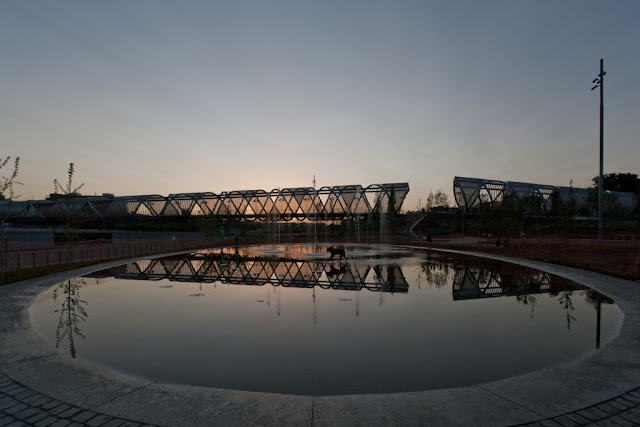 Playing with that topography, the two cones join above the curve of a hill, and are offset to create a new entrance point to the park. 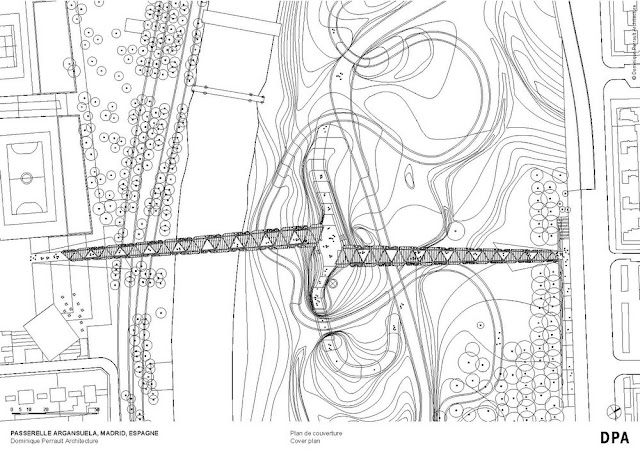 This positioning creates a platform over the park and the surrounding city, and an exceptional vantage point from which to admire the famous Toledo Bridge. 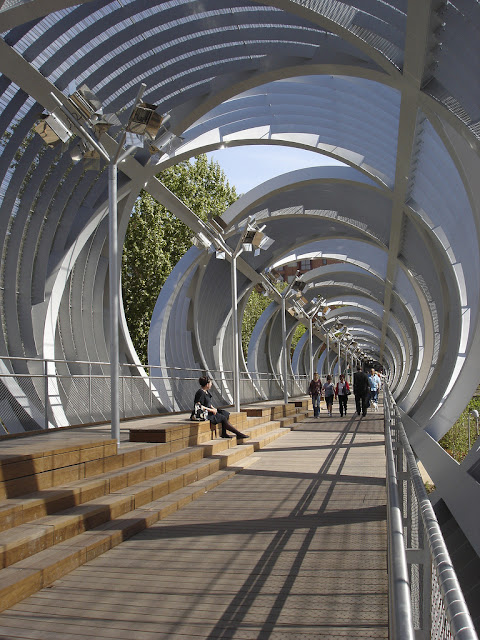 Each cone rests upon two pillars laid at each end, giving the impression that the footbridge is floating in the air. Made in steel, the self supporting main structure has two interlocking metal spirals that cross diagonally. 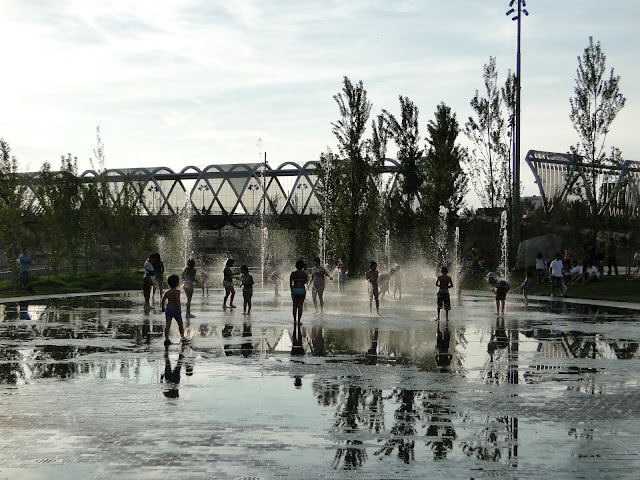 A silver ribbon, made of metallic mesh, wraps this structure and protects the users from the sun and the bad weather. “Sewn” like a spiral, this ribbon creates a rhythmic and dynamic line to the Arganzuela Park. 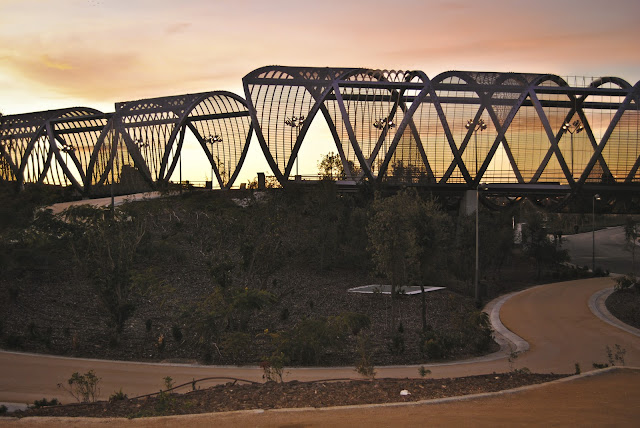