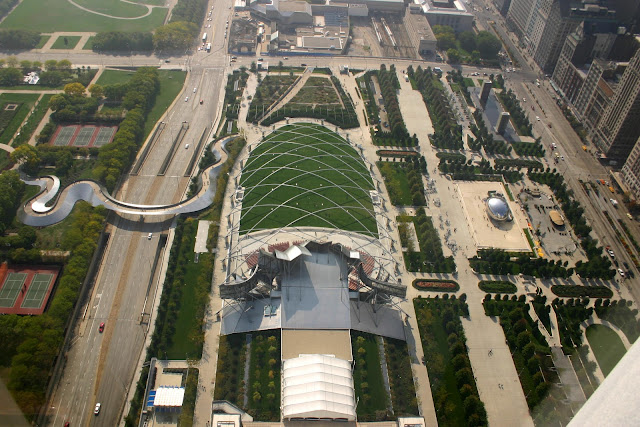 Millennium Park is perhaps the largest intensive green roof project in the world! This 24.5 acre public park was dedicated July 16, 2004, as a crowning civic achievement in the City of Chicago (and Mayor Richard Daley’s) 15-year quest to “green” an industrial metropolis and develop cultural arts. 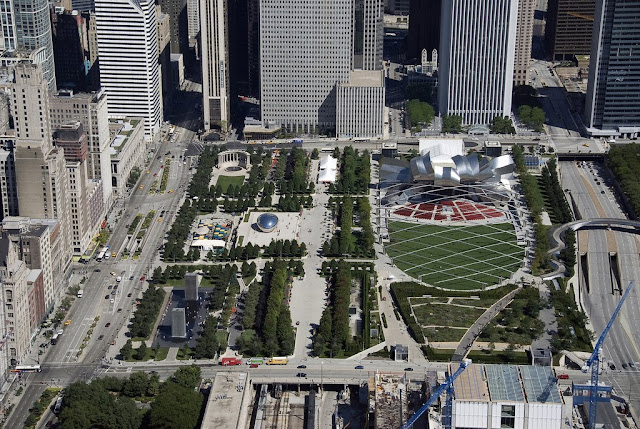 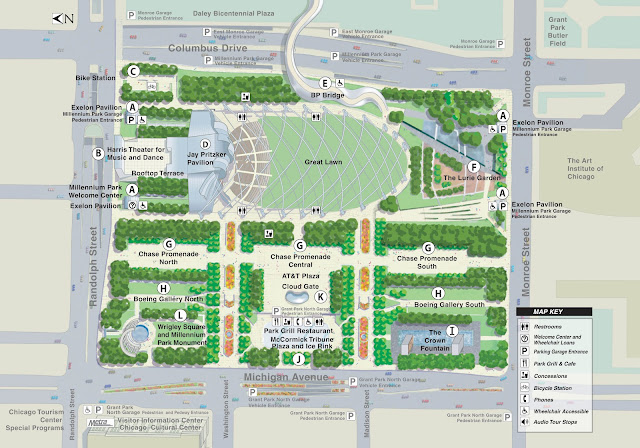 What was once gravel and pavement is now artwork and green space with over 900 trees, shrubs, groundcovers, perennials, annuals and growing medium which absorbs and polishes storm water, cleans the air, reduces the urban heat island and provides multiple social, cultural and economic benefits. 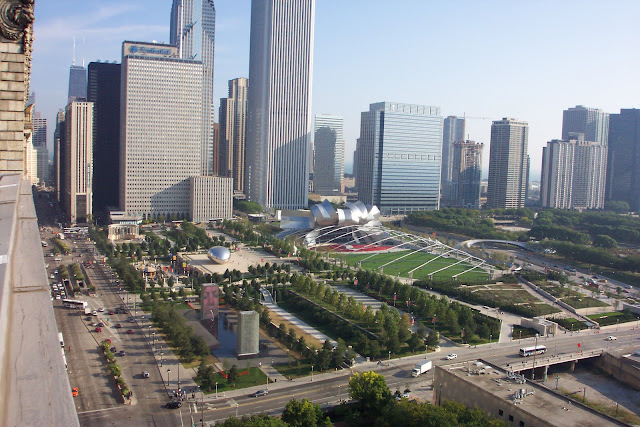 City agencies and a private donor group, Millennium Park, Inc., partnered to champion and direct this vision, as well as raise the $480 million project cost. 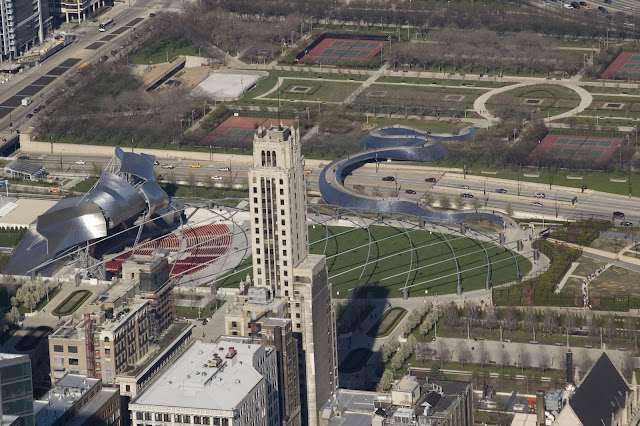 The overall project objective was to create a free cultural venue for Chicagoans and tourists with a focus on providing a new state-of-the-art outdoor music facility. 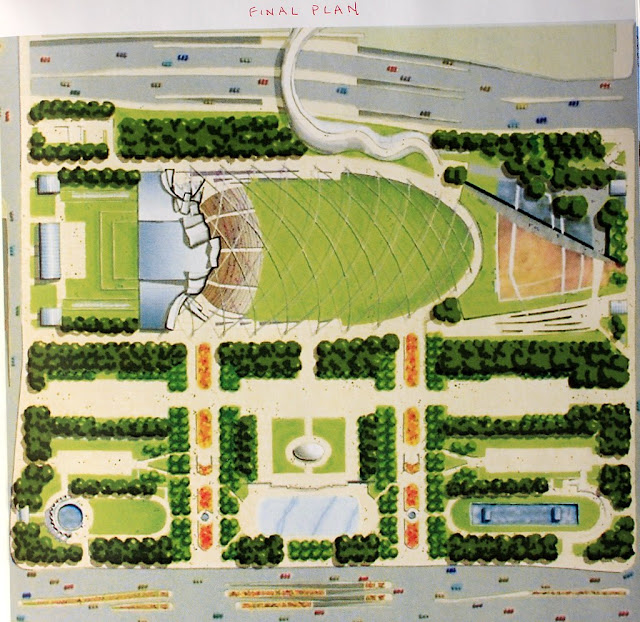 The secondary goal was to remove (or cover) the unsightly train terminal, railway lines, and 800 space surface parking lot, which occupied this prominent location within Chicago’s front yard. 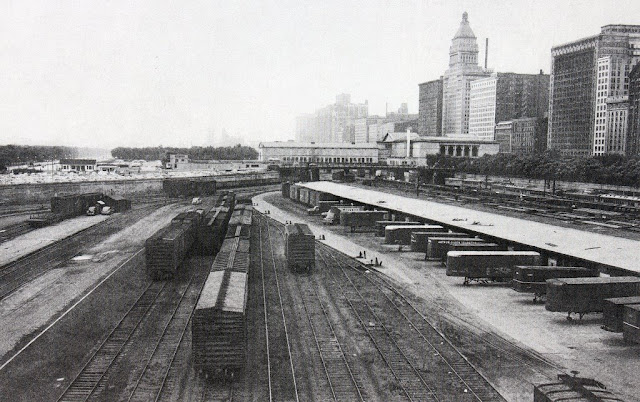 Transformation of the underutilized rail yard and deteriorated underground parking facility into Millennium Park was guided by City agencies, the Donor group, artists, landscape architects, architects, engineers, construction managers, and contractors, requiring six years between 1998 and 2004 for design and construction. The design of the new park has transformed the physical and economic vitality of this foremost City location. While matching the patterns of the historic Michigan Avenue frontage, the park comfortably integrates cutting-edge technology and art into a multilevel contemporary usable public space.
The park holds not one, but many now renowned works of architecture, fountains, sculpture, and botanic garden spaces, as well as grand performance facilities, restaurants, and a skating rink. 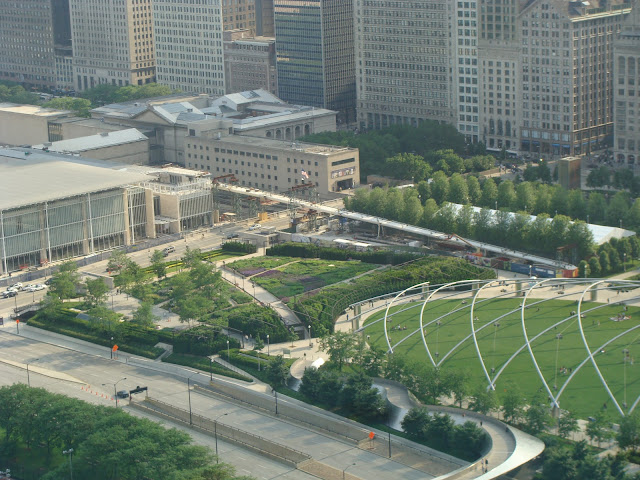 The green roof covers two new subterranean parking garages with 4,000 spaces, a multi-modal transit center including a bridge over the existing railroad lines and station, and a 1,525-seat indoor performance theater. 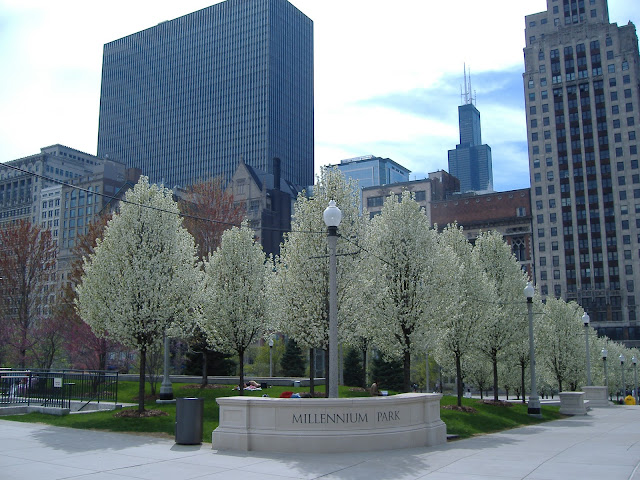 The layout of the park connects pedestrian circulation from the city blocks of Michigan Avenue, along two walkways lined with formal double rows of pear trees blooming white in the spring. 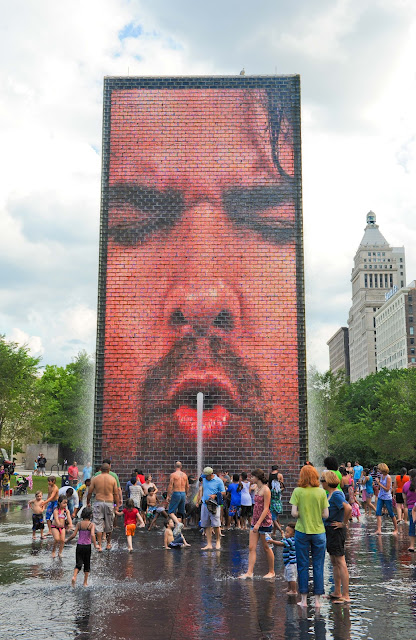 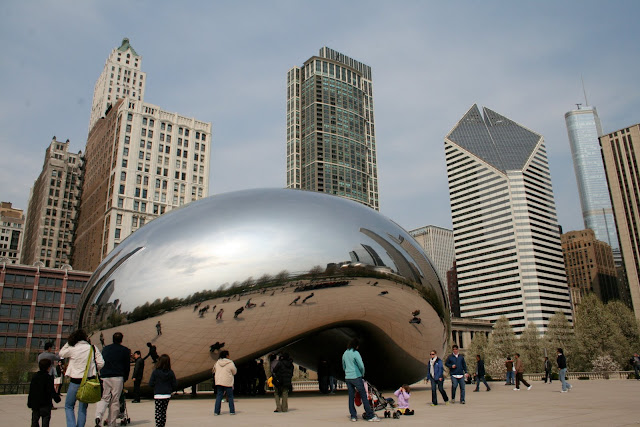 In the center of the Park, on top of the restaurant roof sits the “Cloud Gate” by Indian-born British artist Anish Kapoor silver bean sculpture, reflecting the lakefront, city, sky, and all visitors in between. 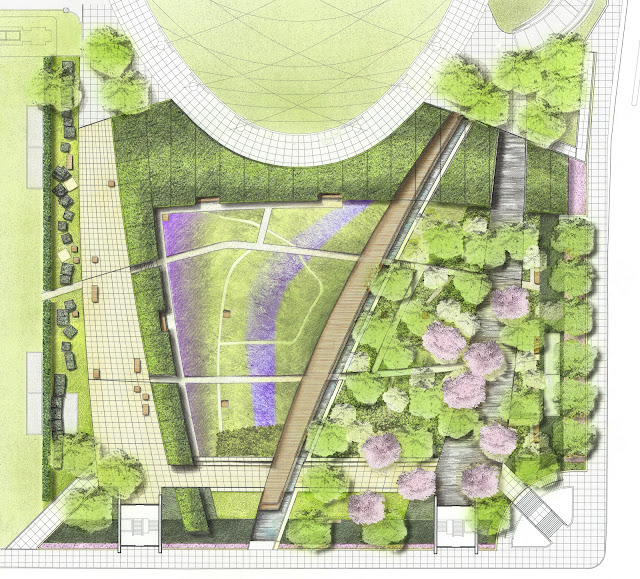 The Lurie Garden, Designed by Kathryn Gustafson, Piet Oudolf, and Robert Israel, is a 3-acre botanic garden featuring a grand “shoulder hedge” of mixed arborvitae, beech, and carpinus trees. The hedge creates a visual separation from the active public areas of the park, and shelters the contemporary garden of 26,000 perennial plants of 140 varieties which depict a vignette of the pre-settlement Midwest landscape with blended sweeps of blooming flowering plants and grasses. 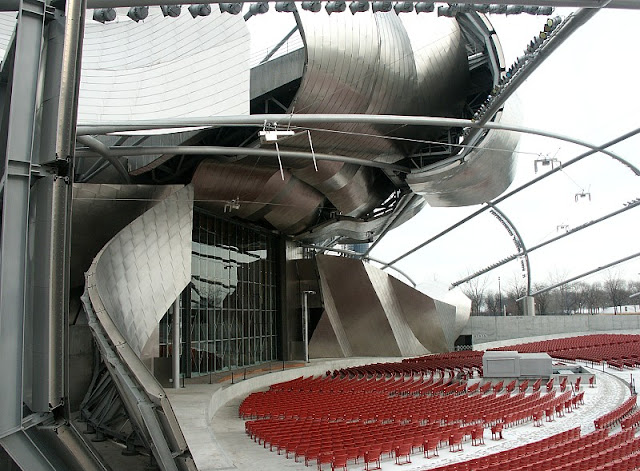 The centerpiece of the park is the Pritzker Pavilion, and BP Pedestrian Bridge, both designed by architect Frank Gehry, constructed of enormous sculptural plates of curvilinear stainless steel. The 4000 seat Pavilion is home to the Grant Park Music Festival, which provides free performances throughout the summer. 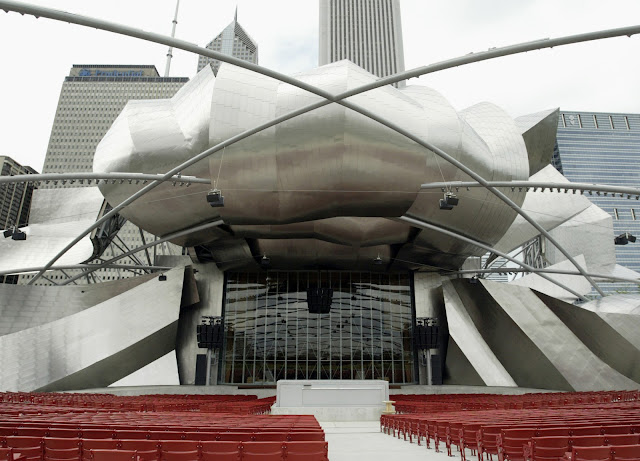 The Pavilion is backdrop to the 7,000 seats Great Lawn; a 95,000 square foot reinforced natural turf lawn, spanned by a grand steel trellis, which holds lighting, and a state of the art sound system. 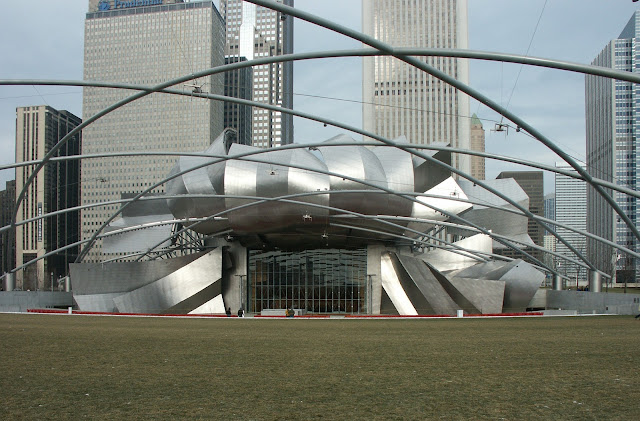 Designed for extreme traffic use and recovery through use of emerging turf technology, the Great Lawn includes a layered high performance drainage system. 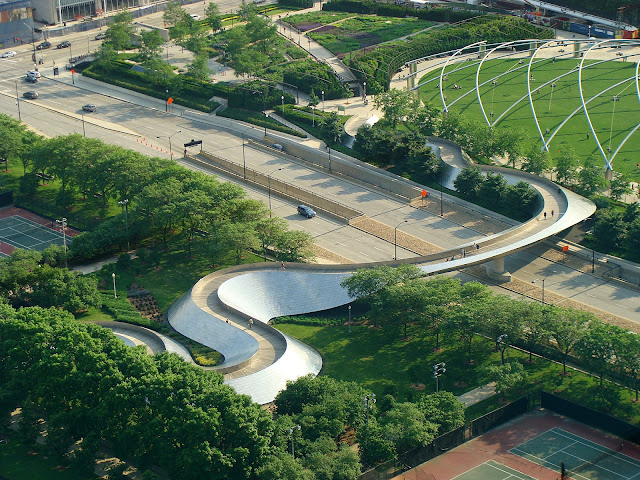 Because the structural deck was designed to support four-feet of growing medium, the park design is not limited by of the pattern of the structural columns below. 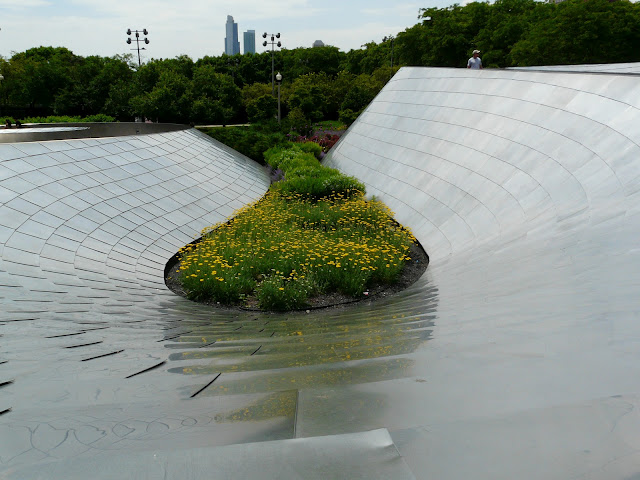 Growing medium for most park areas is a natural, locally available sandy loam or a blended soil based on a local sandy loam mix. The end result is varying profiles of growing medium with sand drainage throughout the project ranging from 8 inches to 4-foot depth. 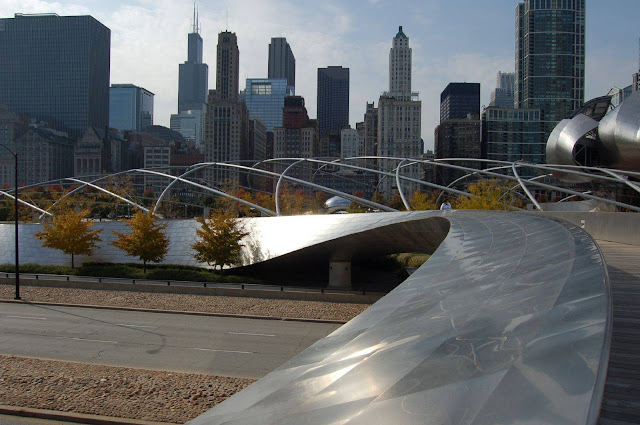 The entire 24.5 acre deck was waterproofed with a hot-applied rubberized membrane system. Styrofoam fill was used to create landforms, which did not exceed the designed load capacity. 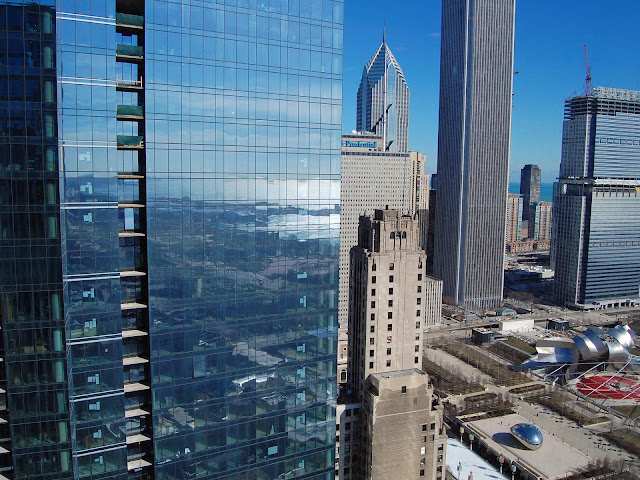 Below the green roof, the subterranean parking areas provide direct pedestrian connections to the theatre and restaurants. Two reinforced concrete cast-in-place garages support most of the roof deck, while a combination of steel structure and pre-cast concrete structural tees span the railroad tracks. 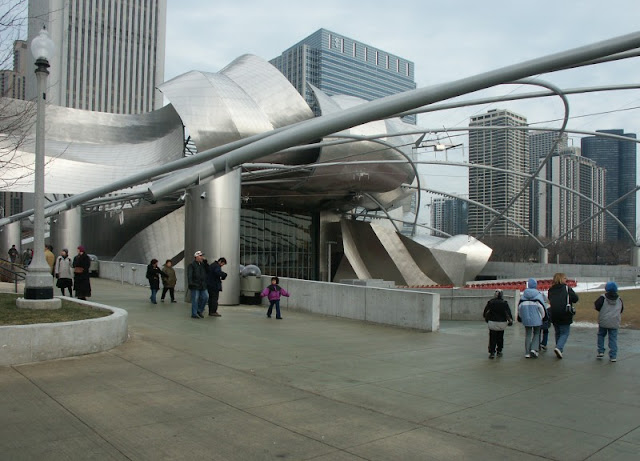 Economic stimulation of area real estate includes seven adjacent condominium developments, which directly attribute their success to the construction of the park. A projected 3 to 4 million additional Park tourism visits to the City for 2005 translates into a major financial benefit for the City. 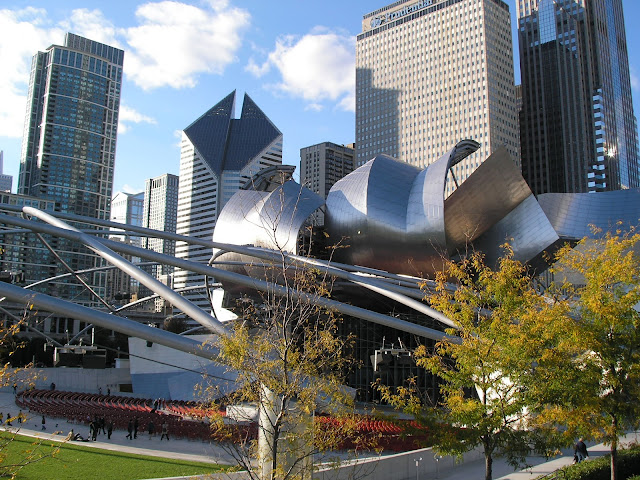 This project is proof that an innovative public-private funded partnership can spearhead a major public works construction project and achieve a product that serves as public open space, as well as provides an unprecedented center for world-class art, music, architecture and landscape architecture. 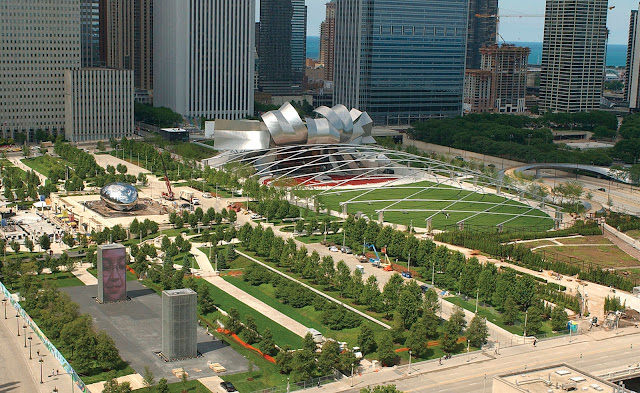