“Film is an illusion created by the scenic coordination of light, space, and movement, which becomes real through projection. In architec­ture, the interplay between these parameters defines the intensity and effectiveness of the individual spatial perception significantly. They are understood to be integrative components of spatial enactment, their effect being projected through sequences of human motion and unfolded in multilayered ways. 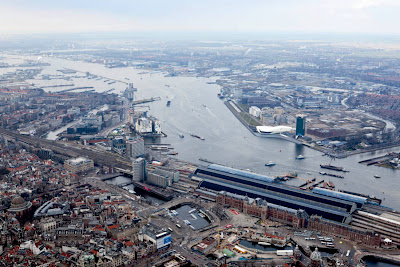 Both the Eye Film Institute’s concept and urban implementation are based on an overlay of two creative disciplines which have at their core reality and fiction, illusion and real experience. The building concept becomes the story board, the architecture the scenography. By delivering a dynamic interplay, the building’s assigned role oscillates between acting as the urban scenery’s protagonist and as a dramaturgical element placed in front of a heterogeneous landscape setting. 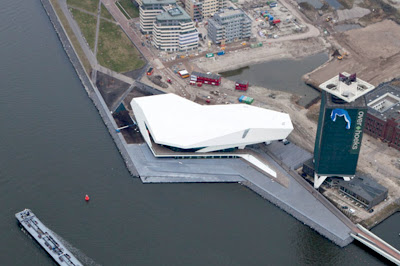 On the interface between land and water, between historic centre and modern development area, the building adopts many faces from each viewpoint, thus finding itself in a constant dialogue with its surroundings. Its radiance overcomes the city’s natural divide and historic lifeline, the IJ river, and is defined by its interaction with the surroundings, its positioning, and geometry. 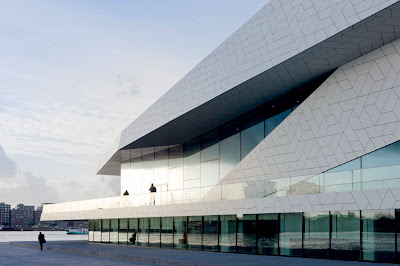 The area’s distinctive communicative effect goes beyond the confines of the building, thus transforming the visit to the Film Institute into a sustained encounter between urban reality and cinematographic fiction. As a multi finctional meeting point, the building’s architectural formulation complies in multiple ways with the responsibility held by a cultural institution of the highest functionality and sustainability. 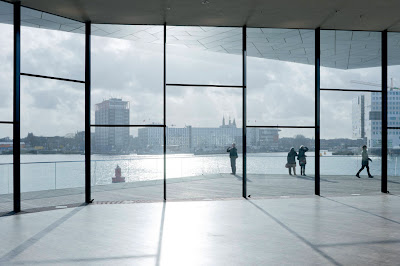 Situated in the privileged riverside area in the heart of Amsterdam, the Film Institute represents the visual landmark of the new Amstrdam Noord quarter. This development area extends over to the former Shell Terrain on the opposite side of the river to the Centraal Station, Amsterdam’s train station. As the international oil company’s former research centre, this area which is situated close to the city centre and along the the busy urban water vein held a sensitive function. 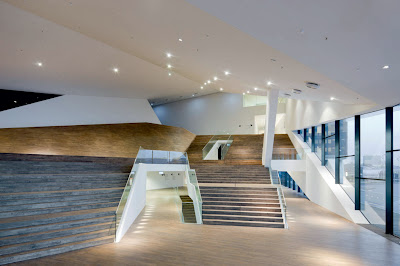 It used to be an isolated wasteland, hermeti­cally secured and not accessible to the public. Since the transfer of Shell to its new headquarters in the north, this stretch of land has developed into a vital expansion area. Apart­ments, office buildings, and a func­tionally disposed infrastructure are supposed to act as a bridge towards the lively quarter on the south bank. 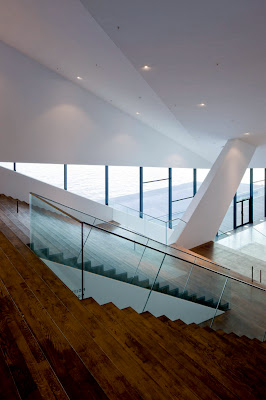 The Overhoeks Tower is the only architectural relic that reminds of the area’s former use. This distinc­tive landmark has been integrated into the Film Institute’s conceptual design idea through formal refer­encing. Flanked by the attractive river promenade pertaining to the Overhoekspark on the northern IJ shore, the new building absorbs the existing usability qualities into its general architectural concept. 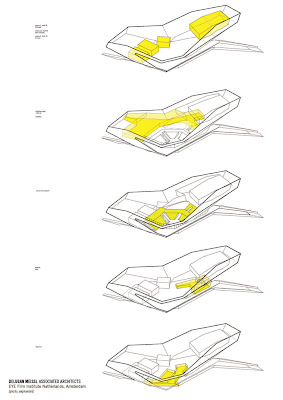 The riverbank’s landscape and the varied movement on the river IJ charac­terise the the building’s city-facing side turning into essential design factors. The new building generates several urban and interior situations which through their communica­tive orientation contribute to the urban and social surplus value.