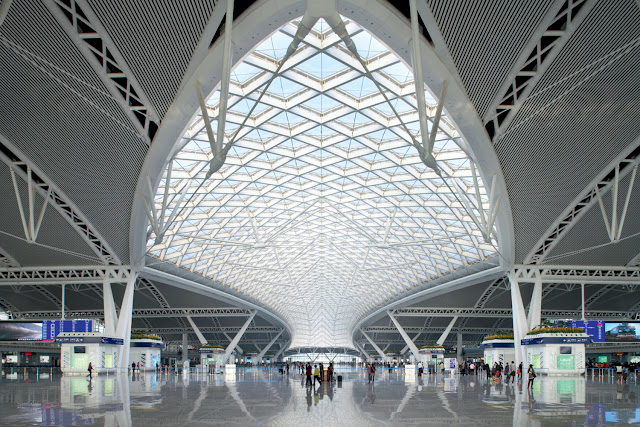 “Located at the heart of the Pearl River Delta region, Guangzhou South Railway Station lies in between the cities of Guangzhou and Foshan. A comprehensive transport hub that serves a catchment area of more than 300 million people. The largest new station in Asia, it consists of 28 elevated island platforms and three underground metro lines, arranged over six floors. 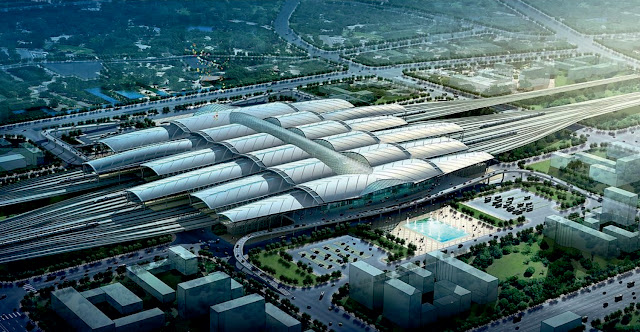 A mix of intercity, express and metro trains, with allowances for future expansion, and interchange to public and private transport systems. Designed to accommodate an anticipated daily passenger flow of over 300,000 by 2030, a clearly defined station layout was adopted. Inspired by contemporary airport design, a horizontal separation segregates arrivals and departures to expedite passenger flow.” Description of n TFP Farrells. 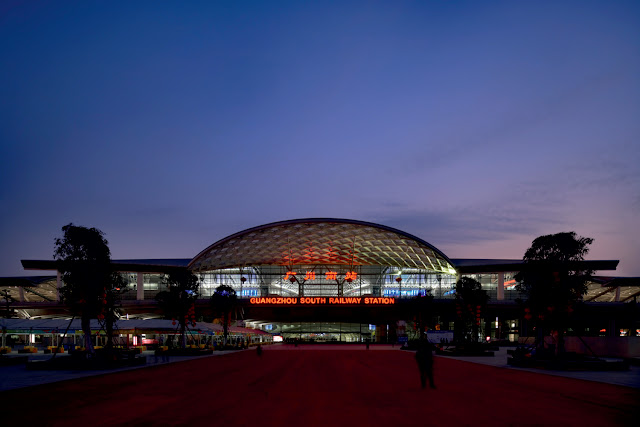 The existing railway stations in Guangzhou are overloaded and unable to meet the growing demands of the city. To increase the passenger handling capacity, the decision to replace an older railway station was made by the provincial government of Guangdong in 2004. Subsequently, the construction of the new railway station commenced in March 2007. 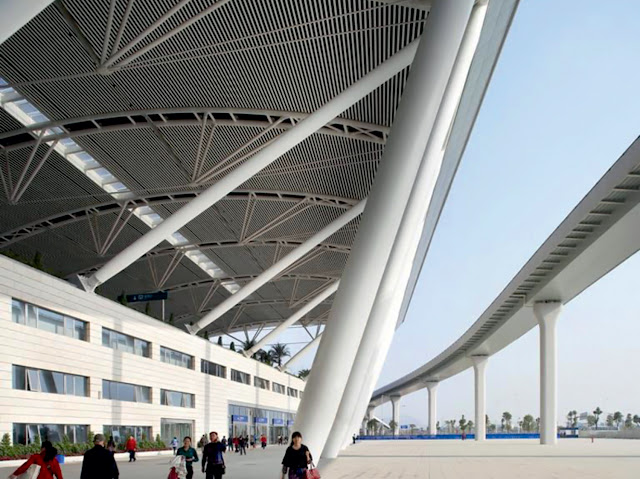 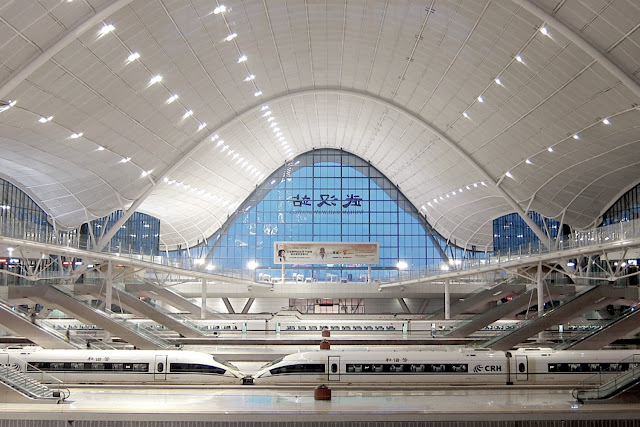 Around 78,900t of steel has been used to construct the station. The railway station features three underground metro lines and a concourse at the basement level.

The station features three stories with a mezzanine floor for food and beverage outlets, and two for metro, car parks and services. Atrium spaces on both ends of the station are situated at the main drop-off entrances. The atriums connect the elevated departure concourse platforms and waiting hall with the ground-level arrivals hall. 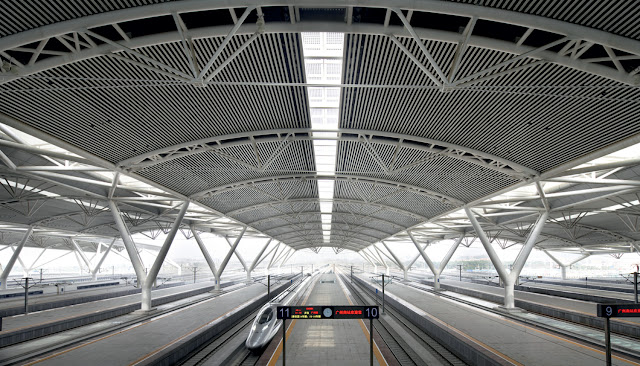 Train arrivals are at ground level and connected to other transport modes such as the underground metro. Train departures are from an elevated concourse. The 28 elevated viaduct platforms for high-speed trains are located between the departure concourse level and the arrival level. 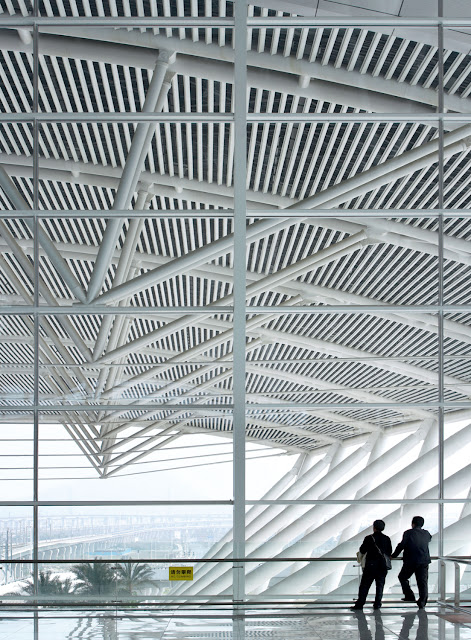 The design of the railway station is inspired by traditional Guangdong-style architecture. The roof is in the form of banana leaves and includes longitudinal skylights to allow maximum daylight into the station. It provides partial enclosure to the open-sided platforms to allow fresh air to circulate in the station. Both ends of the roof are curved to shield the railway station from wind and to reduce uplift during passage of trains. 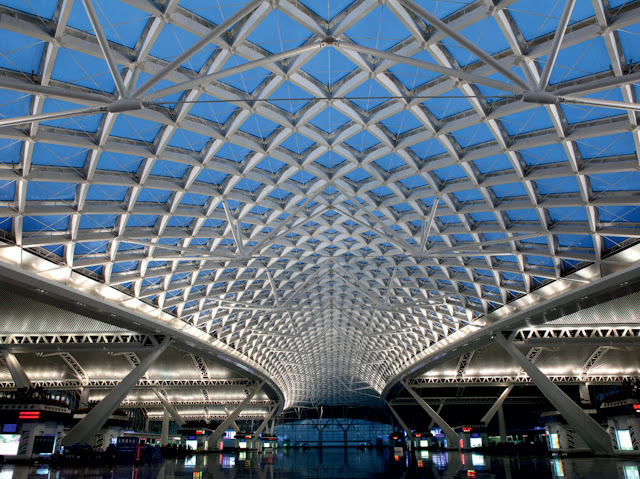 A central spine cuts across the roof to connect the east and west ends of the railway station. With a span of 68m, enabling waiting rooms on the upper level to be built without columns, the central spine widens at the entrances and is narrow at the centre with a canopy placed on either end. The shape of the central spine is in sync with the circulation route of the station below and doubles as a route finder. 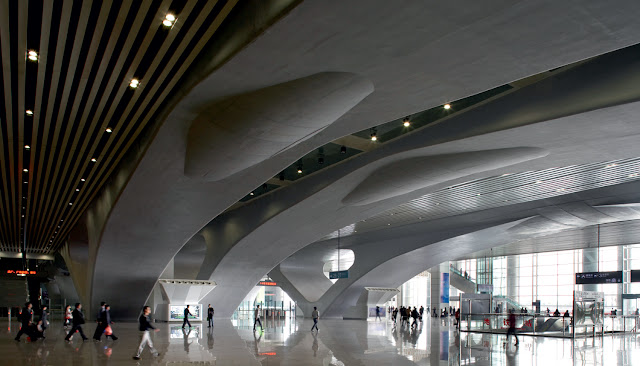 TFP Farrells incorporated several environmental friendly features in the railway station. The design of the station allows natural ventilation and reduces the need for air conditioning and artificial lighting. Photovoltaic cells are equipped in the station to produce solar energy. TFP’s design has allowances for the future expansion of the station to increase its passenger-handling capacity.