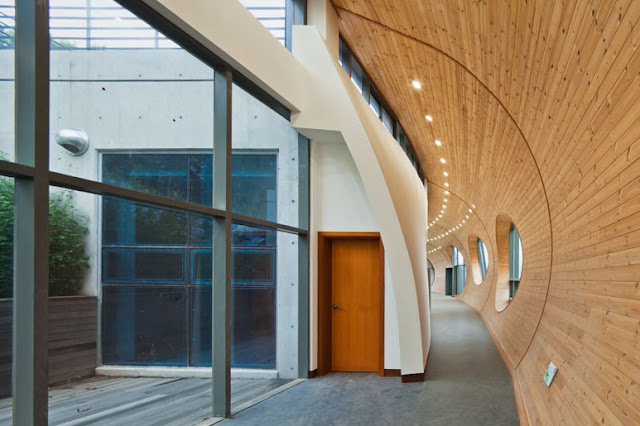 “This project considers the central park in which the building is located as a significant contextual reference. The large park is sitting in the middle of a huge size of apartment complexes 2 hours far from Seoul metropolitan area. 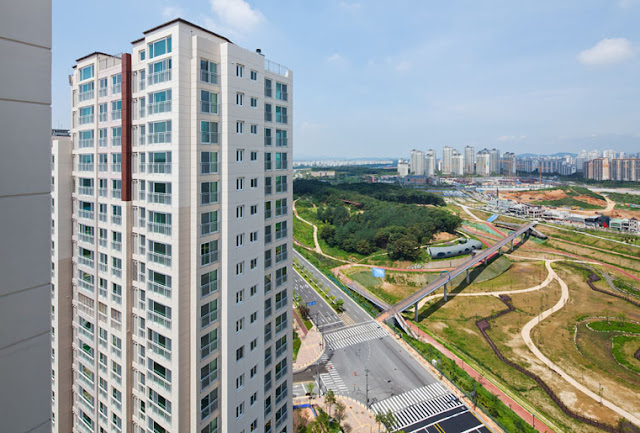 This type of development is very typical in Korea to build a suburban satellite city. This unique type of construction—building and selling ten thousands of housing units at the same time, is almost like creating a new city in a second. 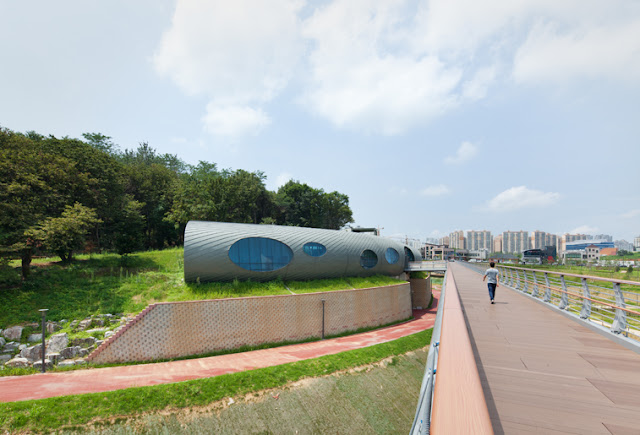 Although this type of development contains some of potential bad effects in the future, the landscape is more positively designed than the apartment complexes to preserve the natural wetland which is left as the original entity in the park. 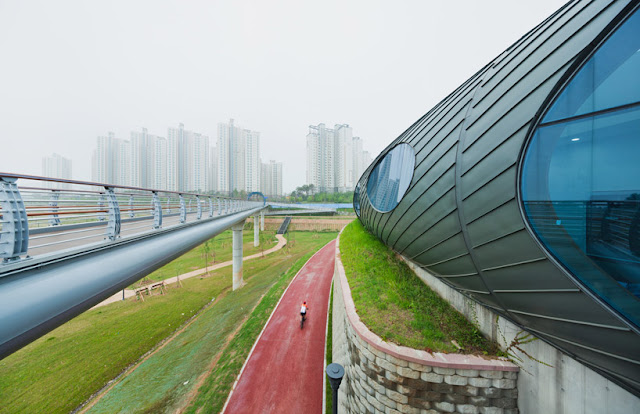 The design focus is on the conflict created between the pedestrian bridge and the original topographical relationship. It was like an inevitable assignment to precisely fabricate the connection from the bridge to an “almost occasionally given” site for the building. 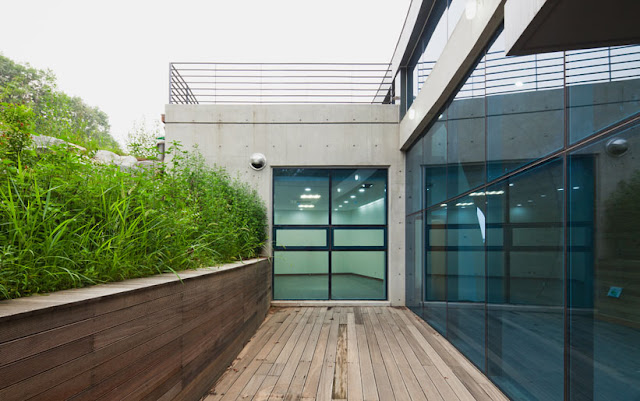 It is another type of contextual matter within the “tabula rasa” situation. Through visualizing this conflict, the dissonant relationship paradoxically becomes a clue for positioning the building. This pavilion functions mainly for the exhibition and the administrative office as a park facility. 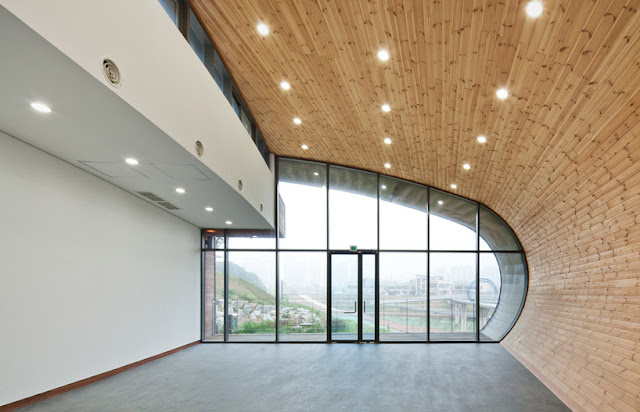 Considering the pedestrian accesses and the functional use, the radii of the arcs which are casted on different levels formalize the hidden tension of two contrast entities—the linear pedestrian bridge and the natural topography. 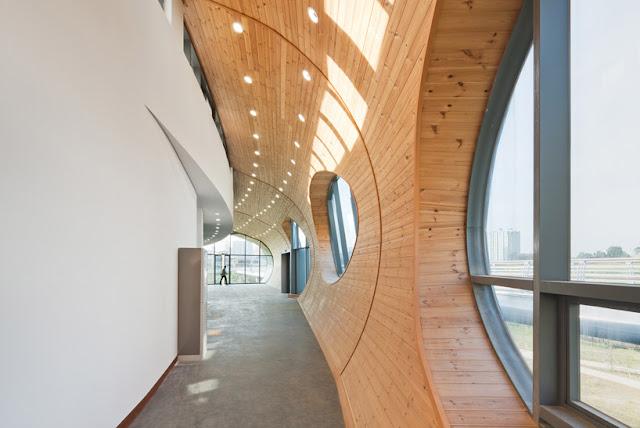 From the tensional relationship, the front façade wall visualizes a physical “barrier” containing the functional occupancy. Having gradually changing widths based on the functional needs—exhibition space to office corridor, the hallway along with the front curved wall is continuous until the westward office which is blocked in sake of separate privacy. 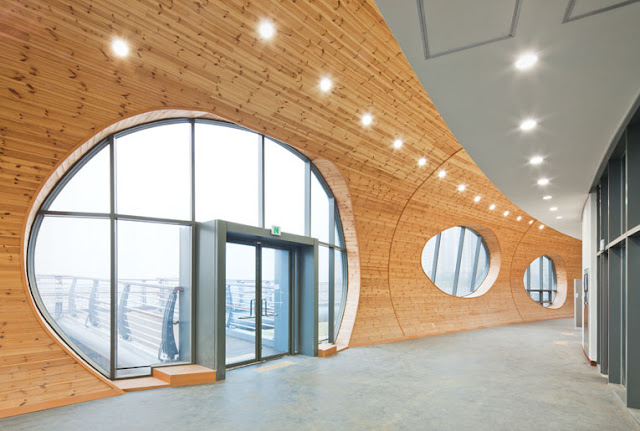 The inner layer behind the hallway has a series of rooms, a staircase, restrooms and a sunken garden. Using the different access levels between the front and backside entries, the curved wall controls the degree of visual continuity toward the opened park view. 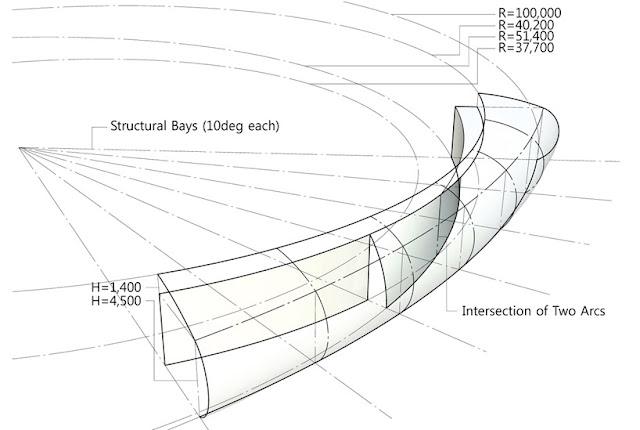 Visitors on the roof can look down to the hallway and the park through the clearstory. On the contrary to the pedestrian bridge giving an open wide view to the park, they rather actively relate the inner side of the building on the roof.

The windows on the curved wall are carved out from the cylindrical intersections to have a series of segmental flat surfaces. Since the large sizes of front concave windows are northward, the clearstory supplies natural light during the entire daytime.” Descriprion of Urban Playground.
Location: Central Park in Paju Eunjung New Town, Korea
Architect: UrbanPlayground
Project Team: Urban Playground, Yagatoo Architects
Photo: Kyungsub Shin