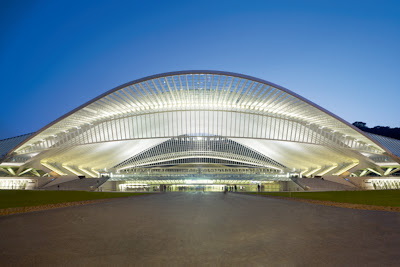 The city of Liège is now a major node in the European high-speed rail network, which links England, France, Belgium, and Germany. When the city’s existing station had to be replaced, as unsuitable for the demands of high-speed rail travel, Euro Liège TGV issued a request for proposals from European architects. 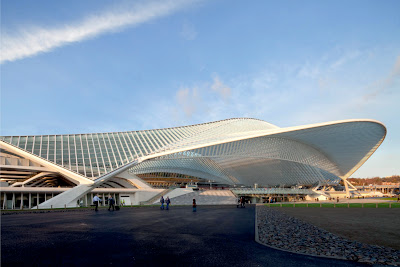 Santiago Calatrava received the commission to design the new Liège-Guillemins station, largely because of his vast experience in the field, in projects such as the Lyon-Satolas air-rail link and the Oriente station in Lisbon. Calatrava conceived the station as a link between two distinct areas of the city of Liège, which previously had been separated by the railroad tracks. 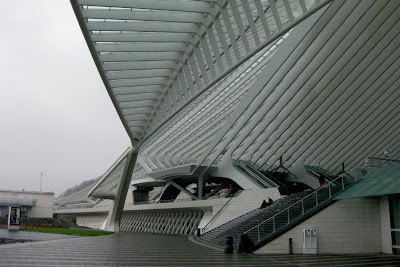 On the north side of the site is a rundown urban area, laid out in a typical 19th century scheme. On the south side, on the slopes of the Cointe Hill, is a less dense, landscaped residential area. Calatrava’s design bridges these two areas with a 200 m (656 ft) passenger terminal, built symmetrically about a northwest-southeast axis. 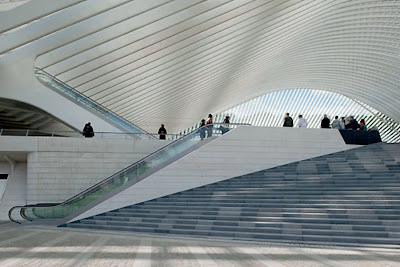 The arched roof of the terminal building extends over the five platforms for another 145 m (476 ft). The station is three levels high on the urban (north) side, stacking an access footbridge and a level of rail platforms. At the level of the Place de la Gare (under the platform), a strip of commercial units helps to reinforce the streetscape.
These units include the Passenger Hall on the main axis, with the ticketing area on the left and a bar-restaurant on the right. On the hill (south) side are five levels: three levels of parking, a vehicular access deck linked with the access footbridge, and a raised pedestrian walkway. 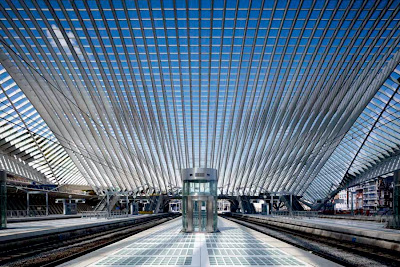 Transparency is achieved by means of the monumental vault, constructed of glass and steel, which allows for a sense of interpenetration between the station and the city. The pedestrian bridges and a walkway under the tracks allow for fluid communication between the two sides of the station. 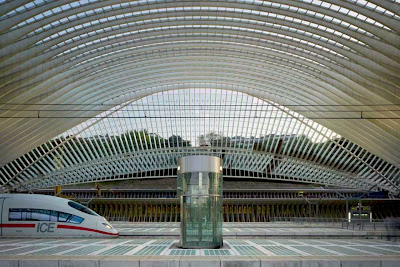 Particular attention is paid to the architectural detailing of these transitional spaces.The project has no facade in the traditional sense, since the interaction between interior and exterior is seamless. The monumental roof becomes, in effect, the project’s facade. To an observer on the hill, the roof reveals something of the inner organization of the station. 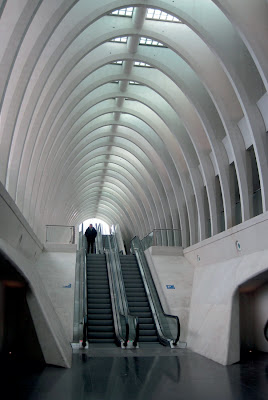 To an observer within the station, the structural arches of the roof frame the views to the outside. From any vantage point, the sensation of transparency prevails. Because the metal frame of the station must be put in place without disrupting train service, a technique normally employed in bridge construction is being used. 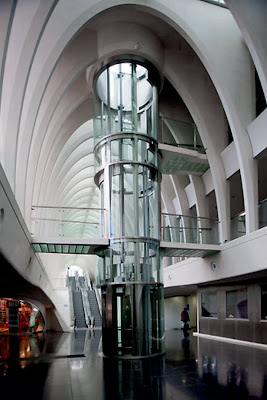 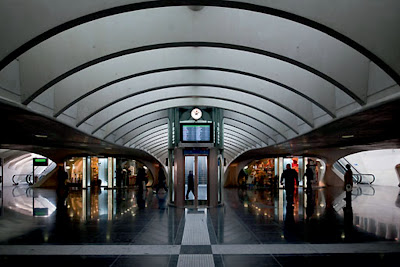 “The glazed roof (tinted slightly to provide protection from the harshest rays) means that no additional artificial lighting is required during the day to the naturally ventilated space below. This ecological sensitivity is reflected in the choice of local materials, the specification of recycled or recyclable materials and ordering the replanting of the sections of the hills touched by the project. All thought through with a conscious notion to reduce the Carbon footprint of the project.” Text of Santiago Calatrava
Location: Liège, Belgium
Architect: Santiago Calatrava
Client: SNCB Holding, Infrabel and Euro Liège TGV
Start of Construction: 1996
Opening: September 18, 2009
Function: Train Station
Construction Area: 49.000 m2 (including roads)
Total Area of Glass Roof:33. 000 m2