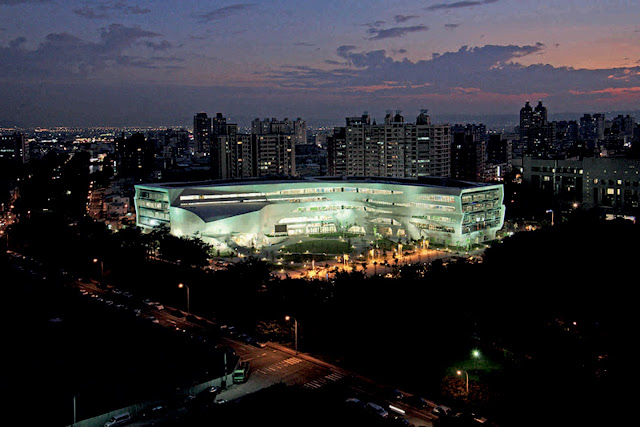 “Originally envisioned as merely a replacement for the conventional Taichung Library, the project brief eventually called for the creation of a digital library which upon completion will be known as the National Library of Public Information. The final project will aim to transcend its municipal role and become a national resource for the accessing, sharing, learning, storing and publishing of digital information. 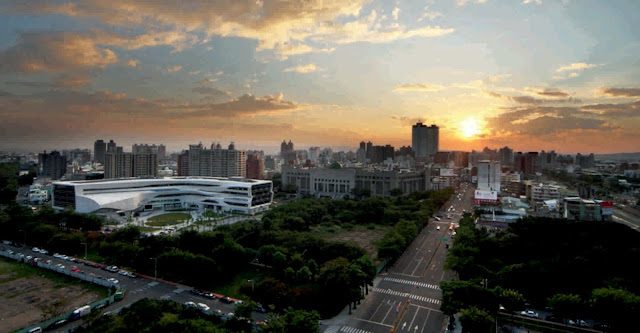 Site Context
Situated between dense development areas and the urban greenbelt, the layout of the site and the building is designed to mediate the transition with its main entrance fronting the green belt, easily accessible circulation paths, the grand steps connecting the plaza and a central court embraced by the ‘L’ shaped building. Furthermore, the shifting strip windows both literally and figuratively reflect the bustling flow of traffic around the site. 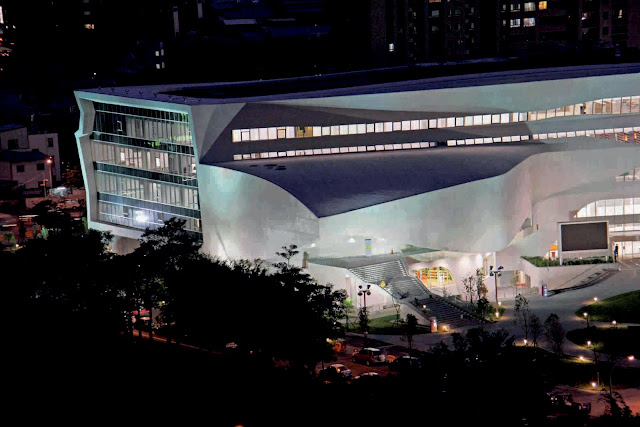 Design Concept
The genesis of the design is the decision to directly confront the challenges and opportunities presented by the dynamic nature of digital media. Inspirations for the massing concept include the Mobius strip and Klein bottle, both of which explore solid and void, form and formless. The resulting fluid building shape, while can only be produced with the latest digital tools, is not an exercise in form. Rather it is the manifestation of interconnecting program elements and ever-changing spatial movement. 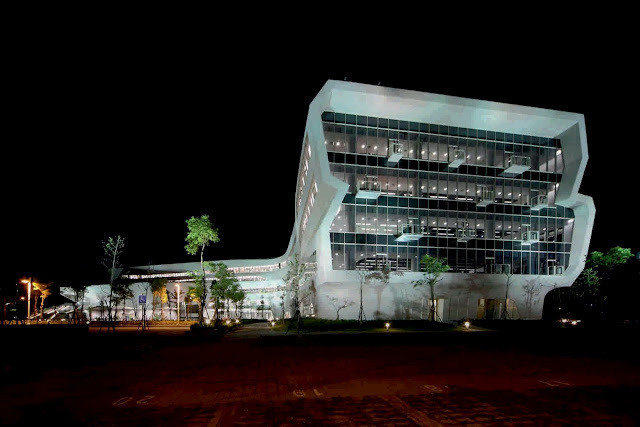 Furthermore, the project seeks to acknowledge the urban history of Taichung, which developed from the excavation of the irrigation waterways since its first settlement in the 18th century. The architecture manifestation is the “horizontal flow” of folding skin and shifting strip windows that evoke ripples through the changing light and shadows.? The water analogy is further reinforced by the use of round mosaics that are reminiscent of river pebbles. The same concept is carried through into the interior where light ribbons in the ceiling serve as circulation guides. Data and electrical conduits are integrated with the ribbons that traverse the various floors and areas, matching function to form. 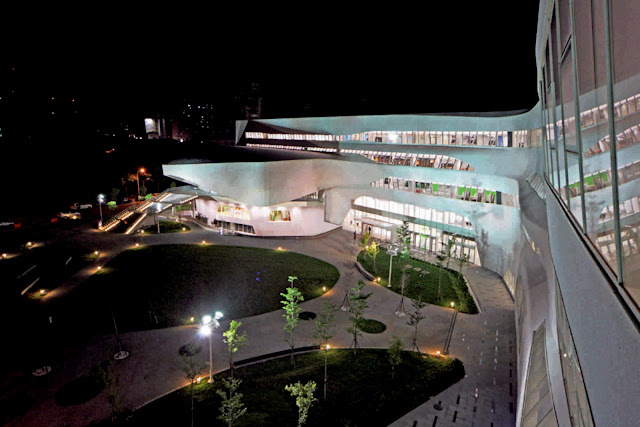 Reading Areas
The strip windows of various heights and inclination bring in daylight differently, thereby creating various reading environments for the discerning users. Such areas include wide expanses fitted with lounge chairs and reading tables, a bar table that overlooks the atrium, a semi-outdoor story area, and a series of round skylights that allow glimpses of the shifting sky. 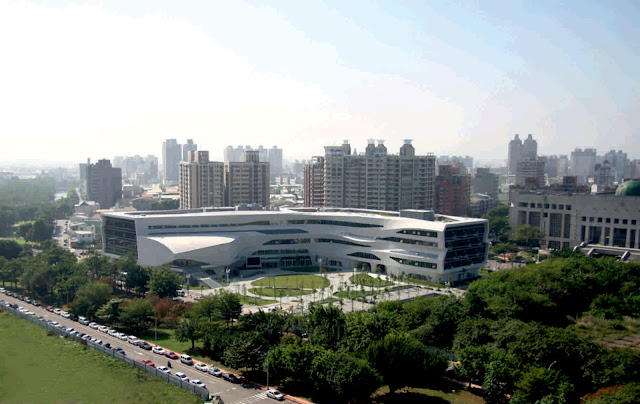 Interior Design
In the interior, each floor’s spatial arrangement, color and furniture design takes its cue from the corresponding outside view – event, trunk, crown, the city skyline, and cloud. The result is clear differentiation of the various program areas while the building’s abundant glazing fosters an outside-in effect.
1F Digital Lobby: Designed as a space to feature the flow of information, the use of orange-red color symbolizes the energy of the crowd with the information desk as the focus.
The children learning area employs a forest and animal theme with colorful elements such as bookshelves that recall hedges to create a spatial experience.
2F Multimedia: Vertical wood arches and light pillar echo the tree trunks outside the windows
3F Periodicals: The tree crowns are transformed into bookshelves and furniture for reading, creating an atmosphere of being in the treetop.
4F Science and Technology: Taking its cue from the urban skyline, the bookshelves are staggered in height and feature brightly painted, lighting integrated display frames that evoke city lights through windows.
5F Humanities: The cloud-like curved white furniture echoes the blue sky above and is enhanced by the natural light filtered through the round skylights. 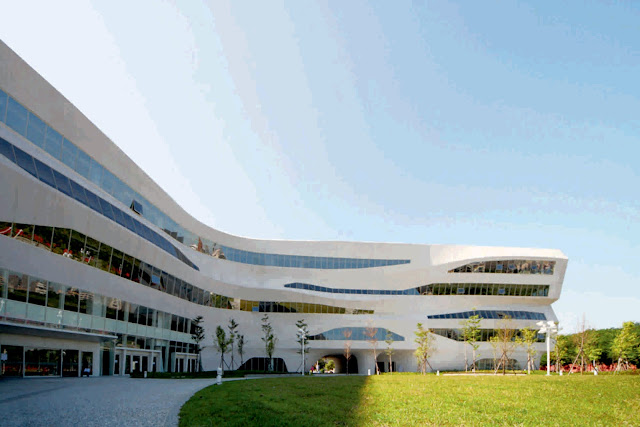 Materials & Methods of Construction
The building’s free-formed skin with its curved planes and organic tree trunk-shaped columns tested the limits of design and construction in Taiwan. Starting with the structural slanted columns and slab edges, then a series of zigzagging curtain wall sub-frames that approximates the final undulating surface, the skin’s design was conceived from the inside-out. Finally, a composite wall system with integrated EPS insulation that molds to the folding surfaces, which are then cladded with pearl-white round mosaic tiles of eight different sizes enabling the skin to achieve a monocoque appearance.? Throughout the process, advanced 3D design software and several on-site mock-ups were utilized. 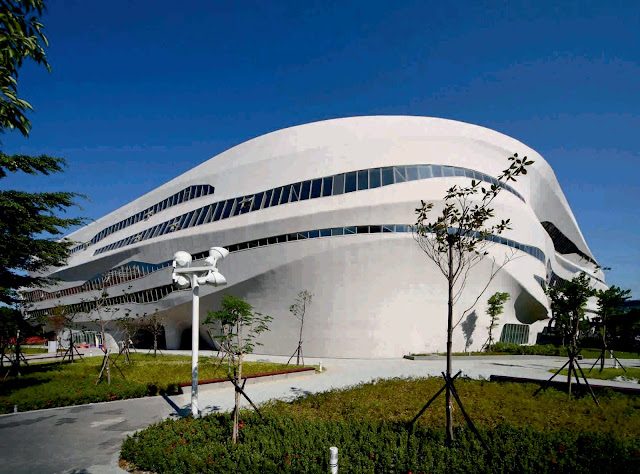 Sustainability
Specific examples of sustainable features include the curved exterior light-weight composite wall system with integrated insulation. The skylight and inclining windows in the reading area introduce natural light into the reading area effectively. The underground public reading room and the recessed volumes of the ground floor facilitate natural air convection.
The landscape of the park includes a multitude of native Taiwan plants that together with the roof-garden create a micro-climate to relieve the heat island effect in the city. Lastly, an integrated rainwater recycling system is employed to reduce water consumption. 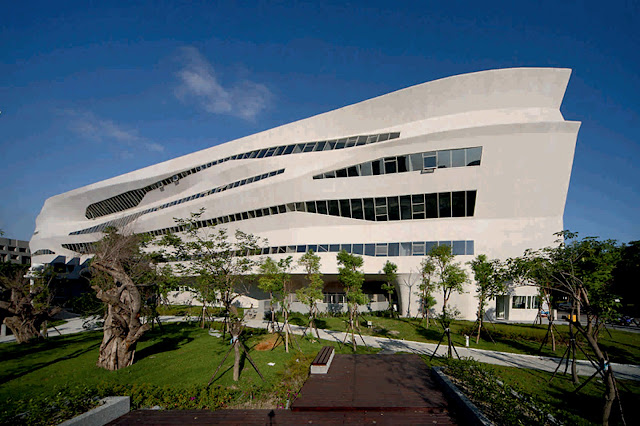 Conclusion
Founded on the balance between cultural, technical and contextual uniqueness, the design of the National Library of Public Information has established a new model for future civic projects in Taiwan.” Description of Jj Pan. 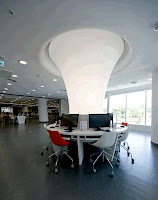