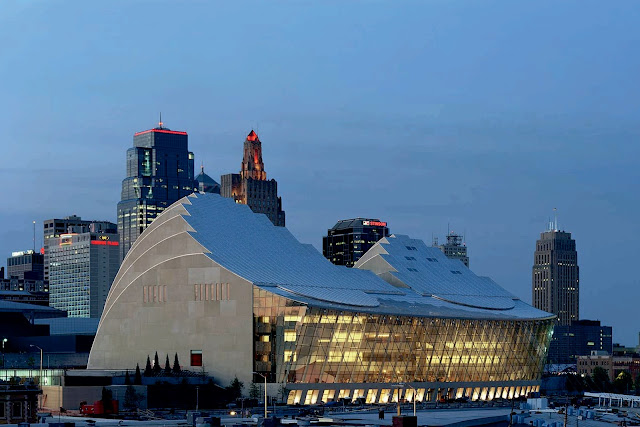 “What began as a sketch on a napkin has become an architectural icon and home for the performing arts in Kansas City. the building’s most distinctive features are the Muriel McBrien Kauffman Theatre, Helzberg Hall, Brandmeyer Great Hall, its acoustical design and accessibility. Each space contains dramatic eye- and ear- catching design that combines sophisticated aesthetics, acoustics and technology with the intimacy of a smaller space and the comforts of home.” Description of Kauffman Center. 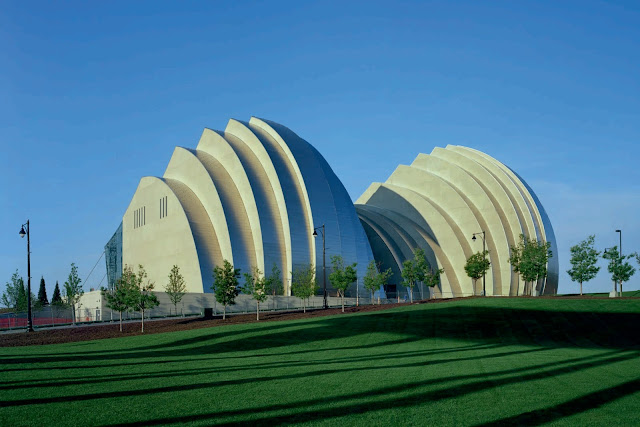 Set on five acres of green surroundings, The Kauffman Center for the Performing Arts has a 180º view of the horizon. This, and the decision to construct two dedicated halls for symphony, ballet, opera and theatre, provided the inspiration for the design. To the north, one sees the drama of the downtown skyline with its grid of streets framing the property and the Kansas City Convention Center. 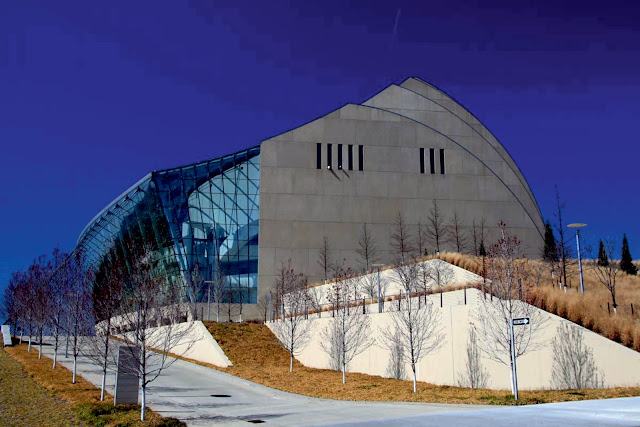 “I am a believer that the site of a project always holds the secret for its design concept,” said Moshe Safdie. “Walking around, I was compelled by the dramatic view to the south. Thus, I placed the two performance halls to face south, integrated and connected by a single great lobby—an expansive glazed porch contained by a glass tent-like structure. “ 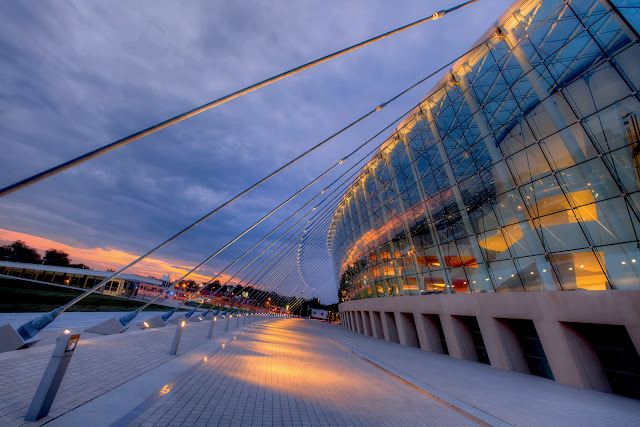 Each hall reads as a distinct volume; metaphorically evoking a musical instrument and visible through the glass shell. As the natural light changes, so does the building’s transparency, reflecting the structure’s surroundings and, at the same time, hinting at its interior. At night, the entire building becomes inverted, displaying all of its interior activities to the community outside. 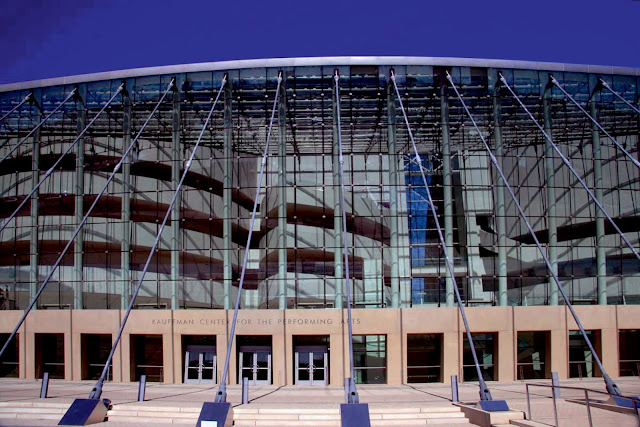 The halls are served by a series of access balconies fronting on the great hall, forming two conical stacked rings of white plaster. The thousands of people mingling before and after performances and intermissions are theatrically visible to one another. Thus, the great hall with its surrounding balconies is a counterpoint to the theatres within; the theatre of the public realm, where the celebrating public are visible to the southern sweep of the city. 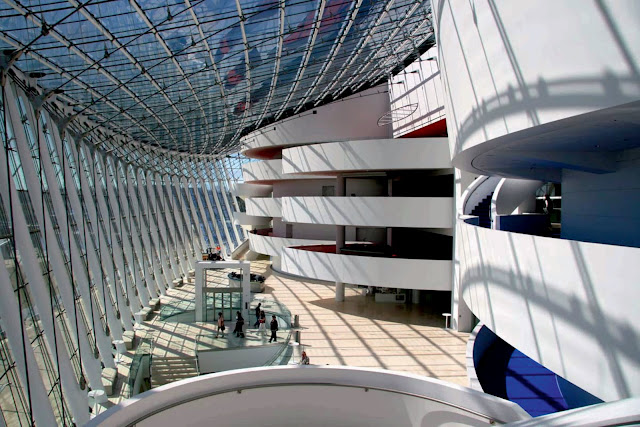 If the site generates the design of a complex as a whole, then the acoustic strategy is the generator of the design of Helzberg Hall. Working with Yasuhisa Toyota of Nagata Acoustics, a volumetric and geometric concept for the hall evolved. From the outset, Safadi Architects wanted a hall that was intimate and in which the public is engaged with the musicians in a feeling of embrace. 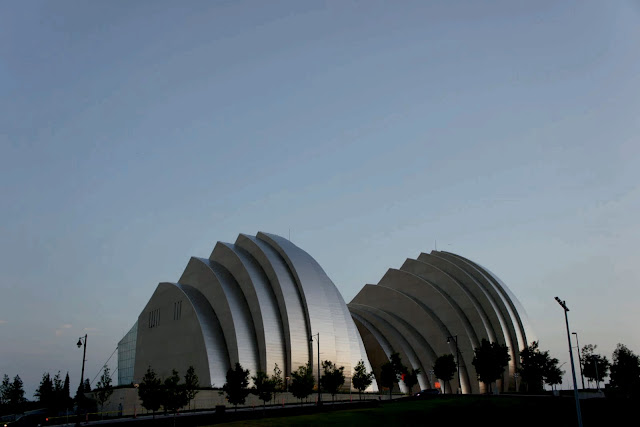 Rather than the traditional frontal relationship of stage and audience, the designers surrounded the music makers with the public. With the 1,600-seat count, which makes great intimacy possible, the architect’s strove to have each and every person experience the music without a balcony or ceiling above them. 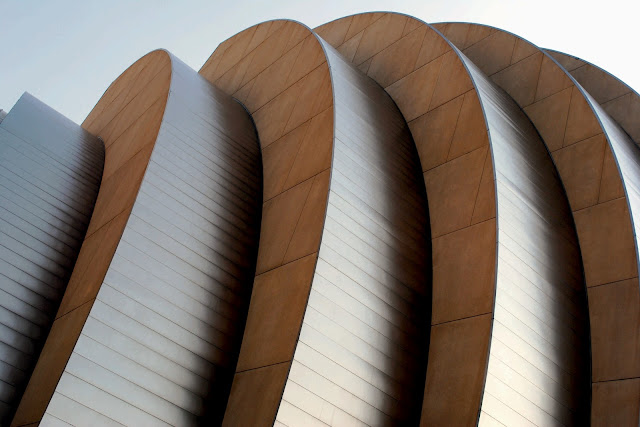 “We also wanted the spatial experience within the hall to evoke the exterior design of the building,” said Moshe Safdie. “Thus, the fanning geometry of the northern façade is echoed within the interior, supporting the sculptural arrangement of the organ within it; as it reaches towards the ceiling it branches apart, forming skylights that allow the daylight and sun to penetrate and reflect upon the organ.” 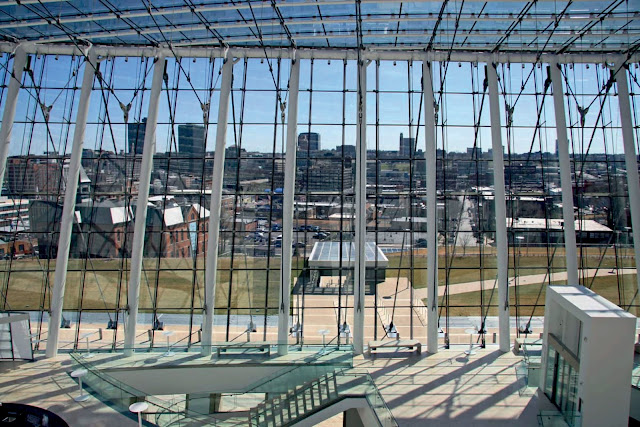 In counterpoint to the warm intimacy of Helzberg Hall, the Muriel Kauffman Theater is festive and exuberant. The three balconies envelop the hall in a horseshoe-like enclosure. Each balcony is broken down into a series of steps cascading from the centre rear balcony to the individual boxes on either side of the stage. The stepping enhances sightlines and provides for a sense of intimacy and connection with the action on the stage. The balcony balustrades are a contemporary reinterpretation of the gilded, glittering, candle-lit balconies of 18th and 19th century theatres. 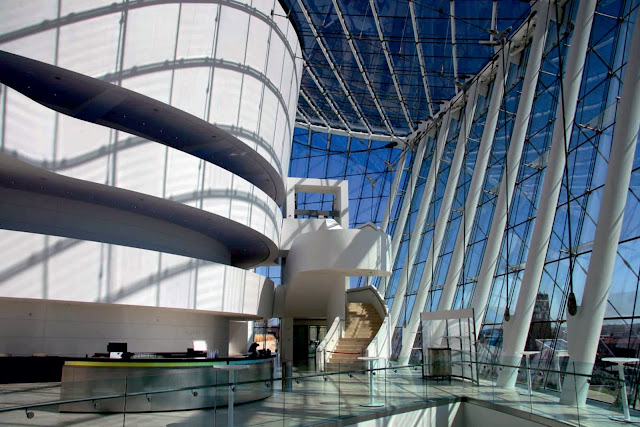 The lights reflect through the glass-like enclosure to form an ever-changing chandelier-like surface. The hall’s acoustic enclosure is composed of undulating walls, shaped like vertical stacked barrels and designed by Toyota for optimal sound reflection. To integrate these shapes into the whole, a series of slats provide a screen-like enclosure. A series of murals, conceived and designed by the students of the Kansas City Art Institute, are painted and illuminated directly on the acoustical structures. The overall effect is of a dynamic mural, rich in reds, greens, blues and yellows, fused into the geometry of the room.