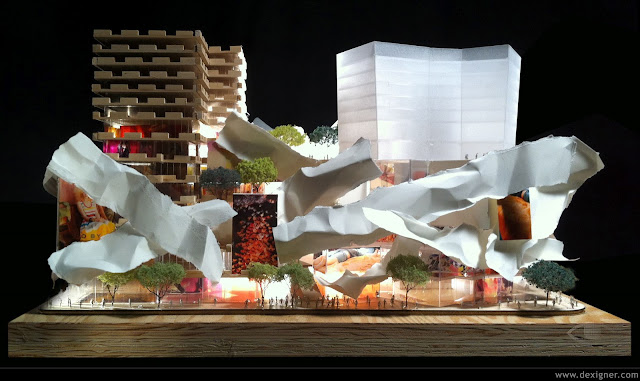 David Mirvish, founder of Mirvish Productions, and world-renowned architect Frank Gehry today unveiled the conceptual design for a mixed-use project that will transform Toronto’s downtown arts and entertainment district and advance the area’s future as a thriving cultural centre. The multi-year, multi-phase project is the largest and most significant urban commission to date for the Toronto-born architect, bringing new cultural, residential and retail spaces to a site immediately next to the Royal Alexandra Theatre and creating a new visual identity for the city’s premier arts district.
The Mirvish/Gehry project is the vision of David Mirvish, who through his family’s support of the arts has helped make the city a major international centre for performing arts and has transformed the downtown King Street Entertainment District. Bordered by many of Toronto’s leading cultural institutions including the Royal Alexandra Theatre and Roy Thomson Hall to the east, the Toronto International Film Festival Bell Lightbox to the west, and the John Street Cultural Corridor to the west culminating at the Art Gallery of Ontario to the north, the project will have at its centre the new Mirvish Collection museum and a new facility for OCAD University. 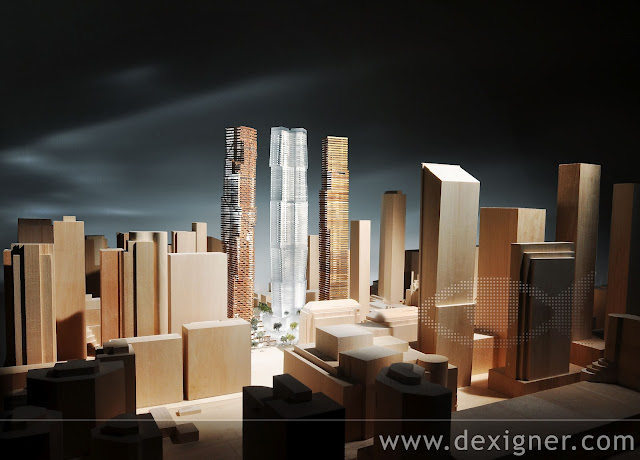 Frank Gehry, whose other major Canadian project is the redesigned Art Gallery of Ontario (2008), grew up in the King Street West neighbourhood, and his design relates directly to the scale, materials and feeling of the area. “We see an opportunity to join our history with Frank Gehry’s history and continue our ongoing commitment to the neighbourhood,” commented David Mirvish. “This area was transformed 50 years ago after my father purchased the Royal Alexandra Theatre, and this project will continue the theatre’s future and transform the neighbourhood again for the next 50 years. I am proud that we can continue this legacy that my father began.”
“It is very special for me to be able to work in Toronto where I was born and to engage the neighbourhoods where I grew up,” added Gehry. “It’s especially interesting that this project involves the arts. That is always meaningful to me. With this project, I wanted to create buildings that were good neighbours to the surrounding buildings and that respected the rich and diverse history of the area. I also wanted to make nice places for the people who live in and visit the buildings. David has an exciting vision, and I am thrilled to be a part of it.”
The Mirvish/Gehry design will create a new profile for the arts and entertainment district at the streetscape and in the skyline, add significantly to the John Street Cultural Corridor, and provide new and enhanced public spaces. The site includes the north side of King Street West and the south side of Pearl Street, occupying the entire block between John Street and Ed Mirvish Way and a portion of the block between Ed Mirvish Way and the Royal Alexandra Theatre, and consists of six properties owned by the Mirvish family. The Canada Walk of Fame, located along King West and Simcoe Streets, will be preserved and maintained. The project’s development, management and construction will be led by Peter Kofman of Projectcore Inc. in conjunction with David Mirvish. 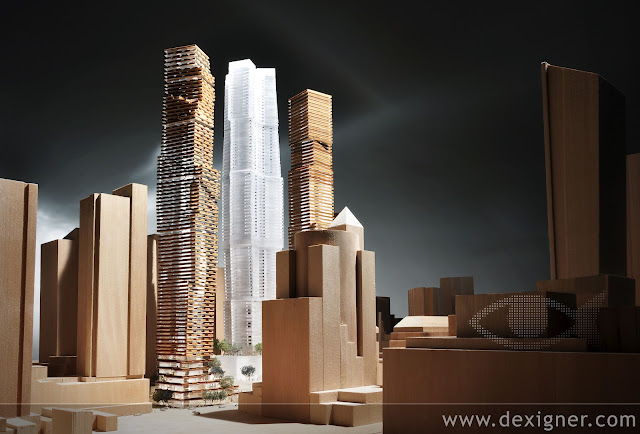 The conceptual design, which will continue to evolve, consists of two six-story stepped podiums, which relate in scale and articulation to the neighbouring buildings, topped by three iconic residential towers, ranging in size from 80 to 85 storeys. Each tower has a complementary but distinctive design, which fits with the history and texture of the surrounding neighbourhood. The trio of towers works together to form a dynamic still life on the skyline. The west block of the plan, oriented to King Street West, features a stepped podium with the Mirvish Collection in the atrium and planted terraces that create a green silhouette overlooking King Street and Metro Square. The east block of the plan includes the preservation of the Royal Alexandra Theatre and another stepped podium housing the OCAD University facility that fronts onto King Street West.
The new 60,000-square-foot Mirvish Collection will be a destination for viewing contemporary abstract art from the exemplary collection of Audrey and David Mirvish. The collection was built over 50 years, beginning when David Mirvish ran a globally recognized art gallery in Toronto from 1963-1978. The Mirvish Collection comprises works by leading artists including Jack Bush, Anthony Caro, Helen Frankenthaler, Morris Louis, Robert Motherwell, Kenneth Noland, Jules Olitski, Larry Poons, David Smith and Frank Stella. The nonprofit Mirvish Collection, which will be free and open to the public, will present curated artist-focused exhibitions that leverage the depth of the Mirvish holdings and will be available to other institutions. It will also host traveling exhibitions. 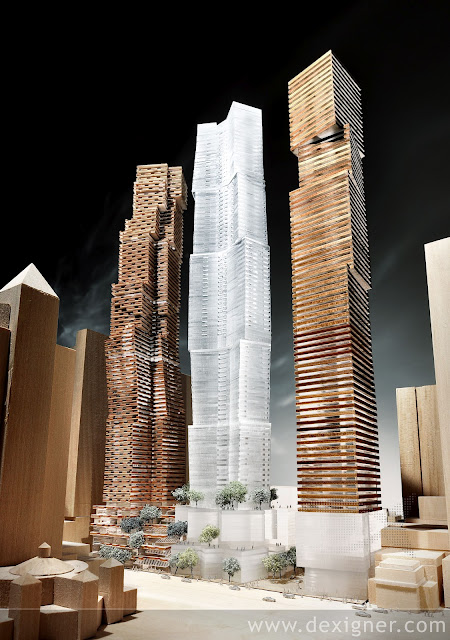 The project incorporates a new multi-floor facility for the OCAD University Public Learning Centre for Visual Art, Curatorial Studies and Art History, including exhibition galleries, studios, seminar rooms, and a public lecture hall. The galleries will feature curatorial programming drawn from OCAD University faculty, the OCAD University Art Collection, the OCAD University Archives and the Printmaking and Publications Research and Production Centre. “Urban universities such as OCAD University contribute to and benefit from their situation within a creative city,” said Dr. Sara Diamond, OCAD University President and Vice-Chancellor. “We are a hub for art, design, media, research, innovation and the business of creativity, and this new facility, in the heart of a transforming cultural district, is a perfect setting for OCAD University.”