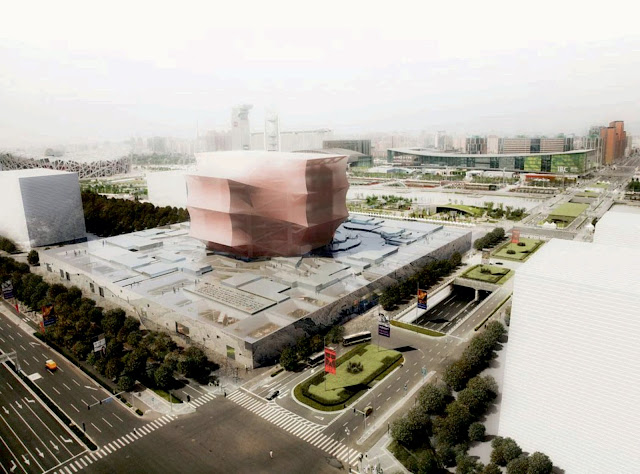 “In the past two decades, our museums have become larger and larger; they have now reached a scale at which they can no longer be understood as (large) buildings, but only as (small) cities. 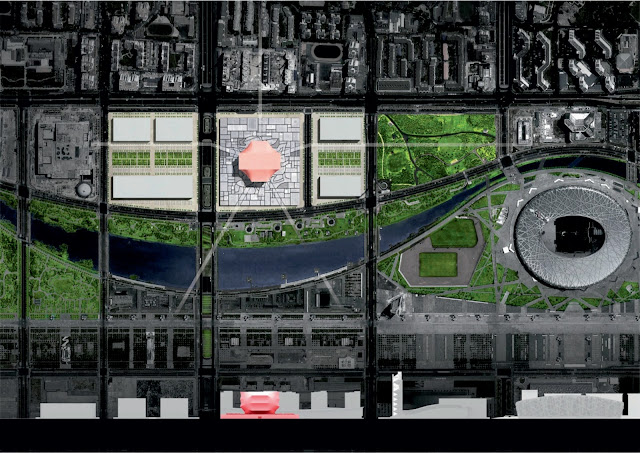 Given the area that it covers, the vast number of artworks it will house, the numbers of visitors it will inevitably attract, the turnover of exhibitions it will have to accommodate, NAMOC can be the first museum in the world based on this new paradigm, the first museum conceived as a small city. 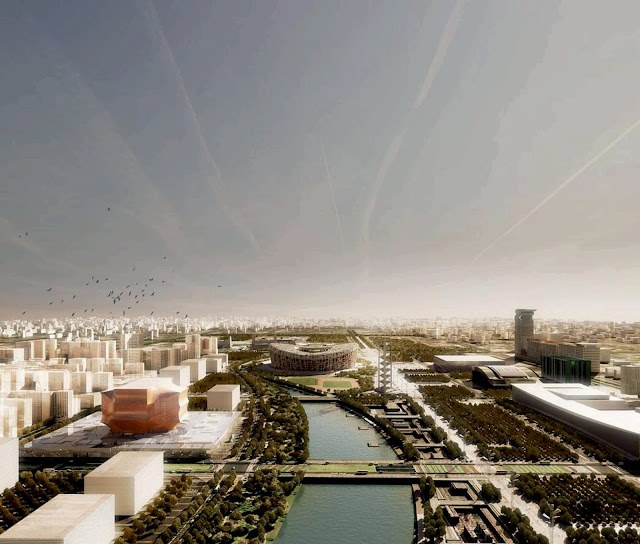 In this way, it can incorporate a significant number of breakthroughs, revolutionizing the way in which the museum works today. Like a city, it could mix sectors, ‘official’ and grassroots, it could have a centre and a periphery, a Chinese and an international district, modern and historical areas, commercial and ‘government’ neighbourhoods.

Like a city, individual sections need not be permanent; areas can be redefined, renovated, or even replaced, without compromising the whole. To plan NAMOC as a city does not mean that it cannot offer the intimacy that remains the essence of the museum experience: like any city, its individual parts can be small, humane… 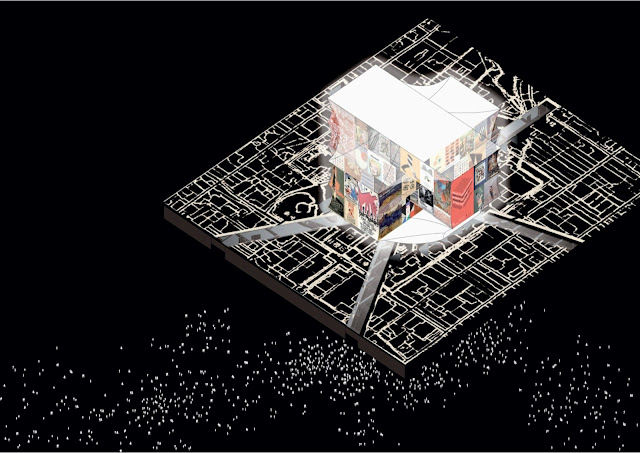 But like a city, it will offer a degree of variety that will be unique for a single museum. Part of it will be public, other parts could be commercial. The architecture of the main plinth offers a range of classical, orthogonal museum spaces, to more contemporary, freer forms. 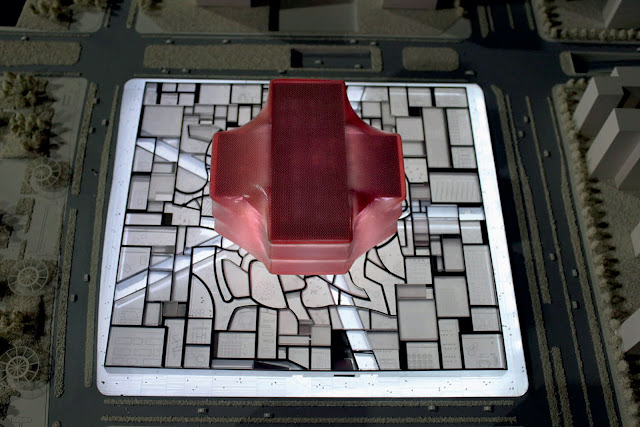 Like any city, circulation can be efficient and direct – for larger groups – or meandering and individual. The story of Chinese art can be told, or discovered. The main circulation of the city is based on a five-pointed star that leads from the multiple entry points on the periphery to the centre. 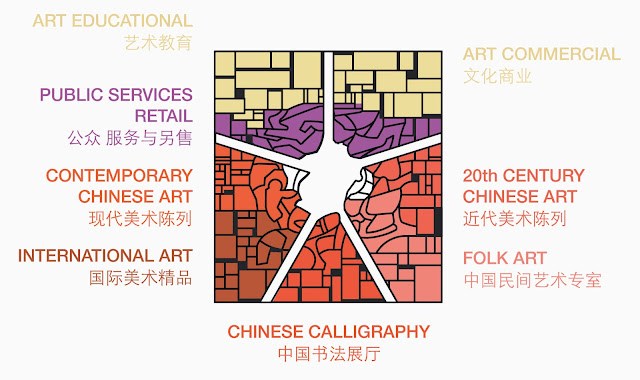 Here, the star connects to the ‘lantern’, a multistory stack of platforms, wrapped in a red skin, on which temporary exhibitions and events are arranged with the smooth efficiency of a convention centre. Although its internal organization is rational, the elastic skin stretched around the metallic frame makes it look like a mystery… 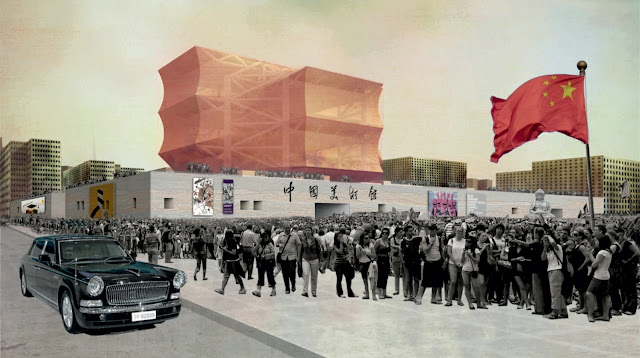 The Lantern is the three-dimensional emblem of NAMOC; a single tangential axis relates the Lantern to the Bird’s Nest. In contrast to the intricacy of the city, the six main floors of the Lantern offer wide open spaces, so that the architecture does not interfere with the organization of the exhibitions or events. 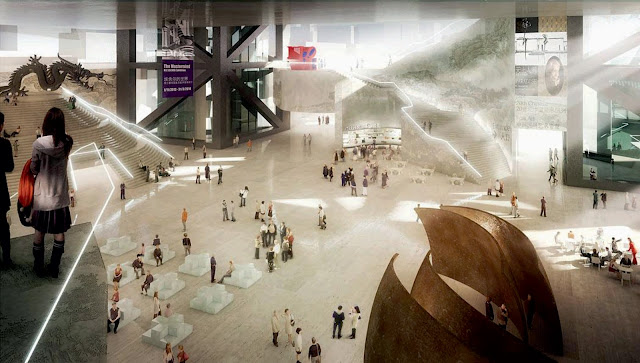 In the thickness of the floors, offices, library, research and other services are accommodated; in the ‘City’ they are concentrated on the five arms of the star. Conceptually, the two halves of NAMOC – ‘City’ and Lantern – are complementary: like the city today, they offer radically different experiences: the small scale, intricate condition of the traditional urban fabric of China, and the contemporary era of radical modernization.” Description of OMA. 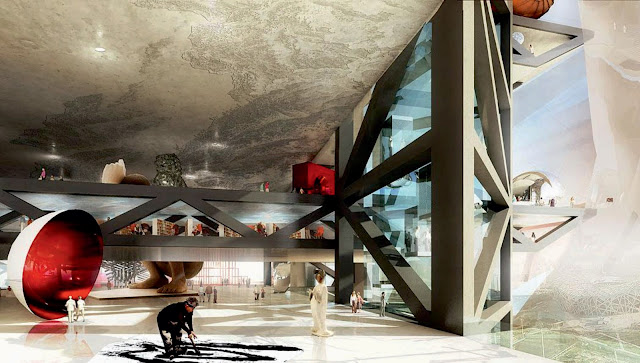