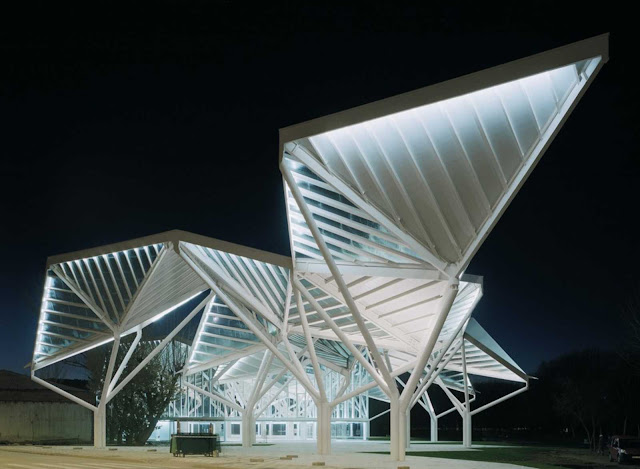 This enclosed pavilion and surrounding park is situated on a 35-acre site bordered by the Júcar and Moscas Rivers and the historic Spanish city of Cuenca. 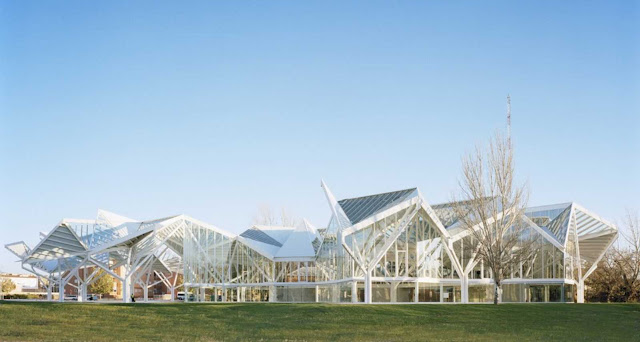 The park rehabilitates the abandoned natural landscape with the construction of performance spaces, an ice-skating rink, bars and restaurants in a cluster of historic buildings currently in ruin and a grand pavilion to be used during the city’s annual fair and weekly markets. 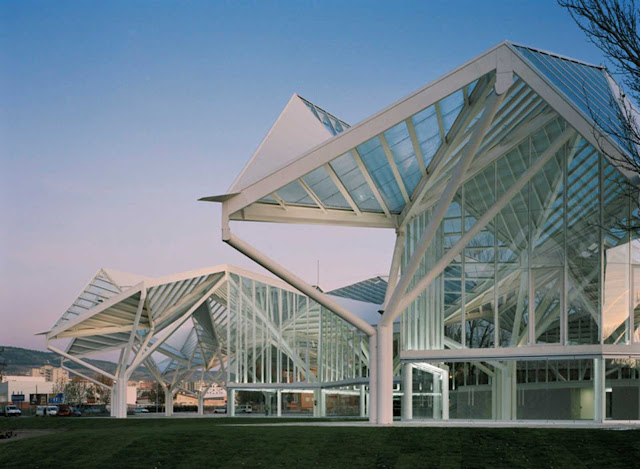 The pavilion, the primary architectural gesture of the project, is placed across the street from the historic city and is meant to act as a filter between the city and the park, diffusing the urban periphery into the natural landscape and acting as a theater for the activities of the park. 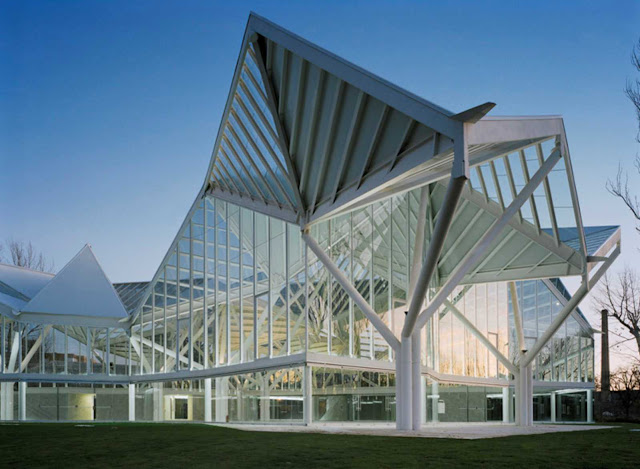 Composed of 23 pentagonal modules that together form a structural network, this steel and glass pavilion addresses the relationship between the natural beauty of the landscape and the adjacent urban fabric. 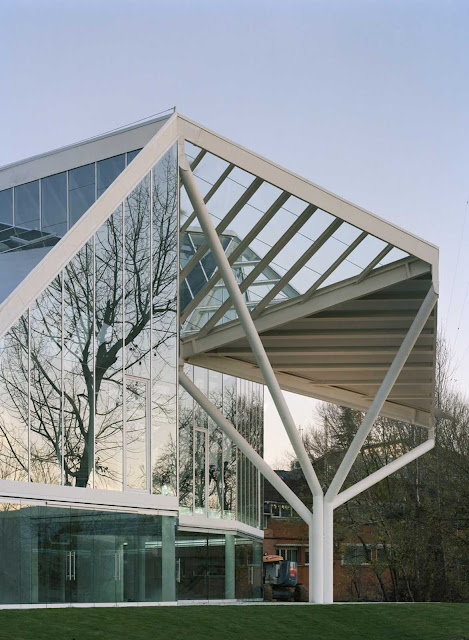 The geometrical form of these modules was born of a search for an equilibrium between the repetition of a unit element and a composition of a whole, in the end creating a modular structure in which the module is no longer distinguishable. 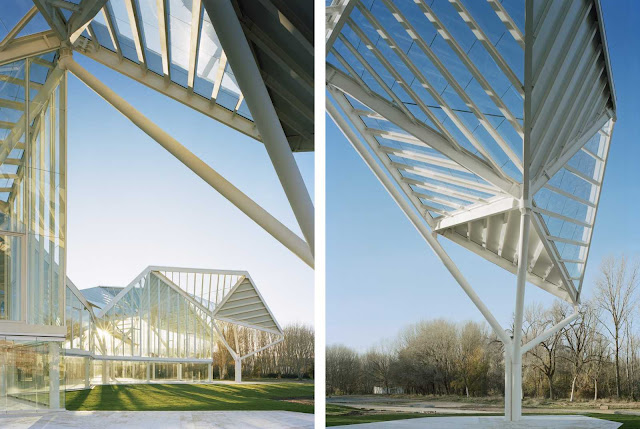 The resulting space appears forest-like from the interior but cristaline from the exterior. It is a building seemingly composed of fragments, which creates an open, unified and continuous space. 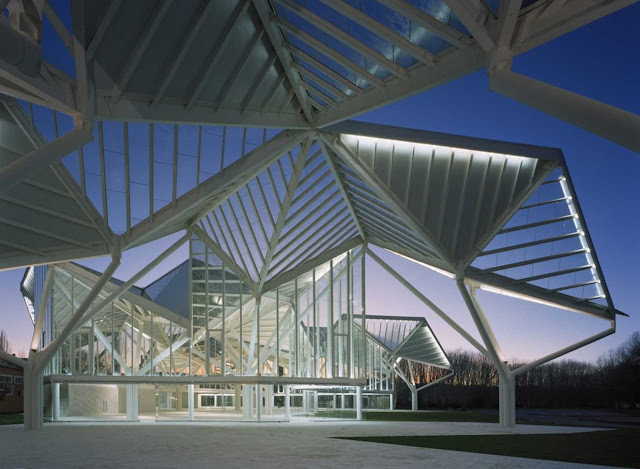 The building, still composed of fragments inside creates an open space, single, continuous, a space similar to what we might find in a forest, an irregular space, more like a medieval baroque square. 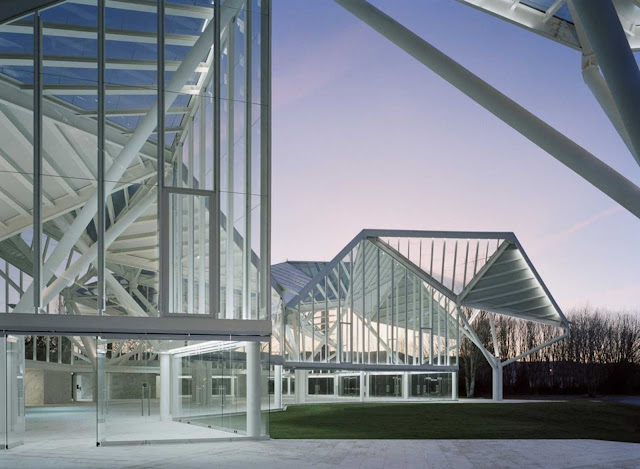 This is a place from which to enjoy the park, protected from the weather, but in contact at all times with the views of the natural surroundings. Obviously hosts many of the social activities of a park and a plaza, walk and assembly, but also concerts and dances, parties, children’s theater, workshops, exhibitions and small fairs. 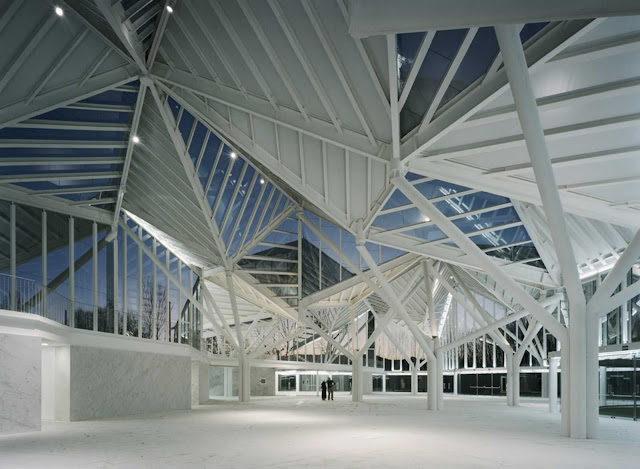 These activities are complemented inside with some services, a café-restaurant, newsstand, toilets, etc. The building is tempered with underfloor heating and low emissivity glass, and 45% opacity on the cover. Also encourage natural ventilation adequate enclosure. 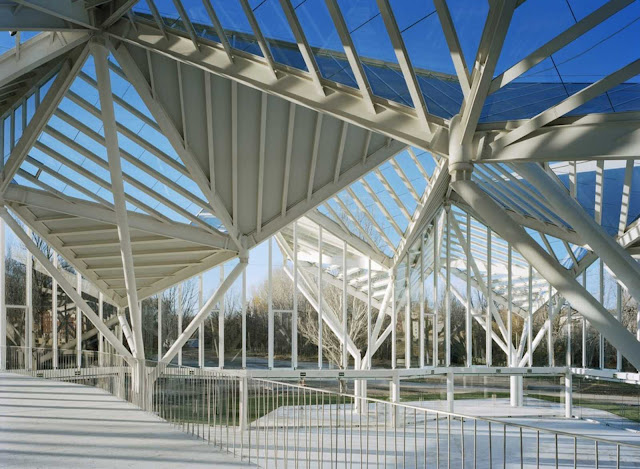 In winter the glass greenhouse temperature increase inside space of several degrees above the outdoor temperature. In summer all level square enclosure consisting folding doors, always remain open allowing the upward movement of air from escaping through the openings which open in all linear ridges.