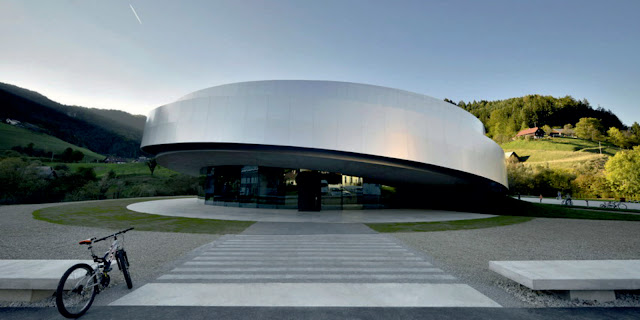 The Cultural Center of European Space Technologies (KSEVT) will supplement the cultural and social activities of the Arts Center in Vitanje, the town in Slovenia that was home to Herman Potocnik Noordung, the first theoretician of space. 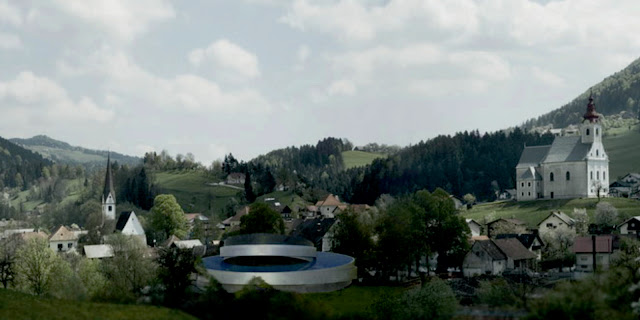 The concept design for the building of the KSEVT derives from the habitation wheel of the first geostationary space station described in Noordung’s 1929 book. It will have a public significance and generate social, cultural, and scientific activities, with fixed and temporary exhibitions, conferences and club/study activities. Noordnung’s space station was designed as a geostationary satellite out of three parts: a solar power station, an observatory and a habitable wheel. 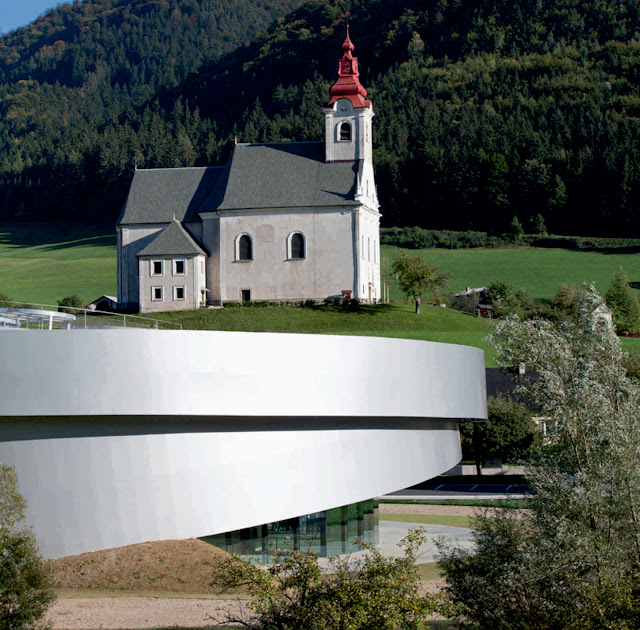 After several decades of ponderings on the habitation of space, this idea remains to be the most revolutionary, yet not realized. The rotating habitable wheel, a circular construction setting up artificial gravity with the centrifugal force, is the best and at the same time a simple solution for long-term human habitation of weightlessness. Since we are not accustomed to that kind of condition, it exerts negative influence upon our body in the long run. 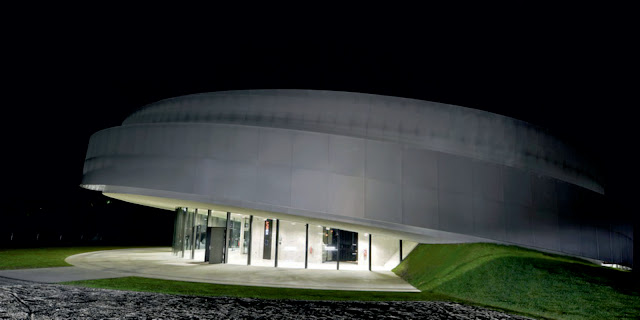 A station in this orbit could also represent a perfect point of departure for longer spaceflights, considering that the Earth’s force of attraction is still the greatest obstacle for that. The building is a monolithic concrete structure, positioned freely between a main road on one side and a stream with a green hinterland on the other. The exterior and interior of the building are made of two low cylinders. 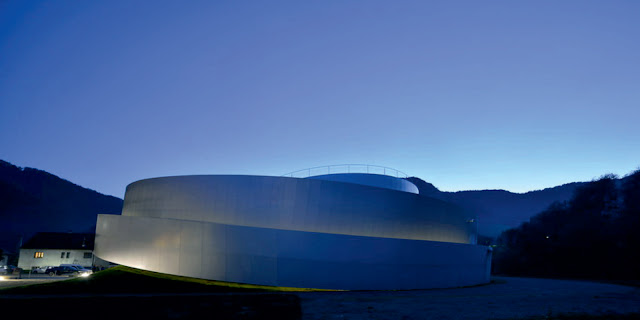 The bottom one is larger and rises from the North to the South, while the upper cylinder is smaller and joins the larger one on the south while rising to the North. The bottom cylinder is supported by the transparent surface of the entrance glazing. From the exterior, there is a dynamic effect between the cylinders, accentuated by the full glass rings around the building. The building appears to float and rotate on its southern and western sides towards the road. 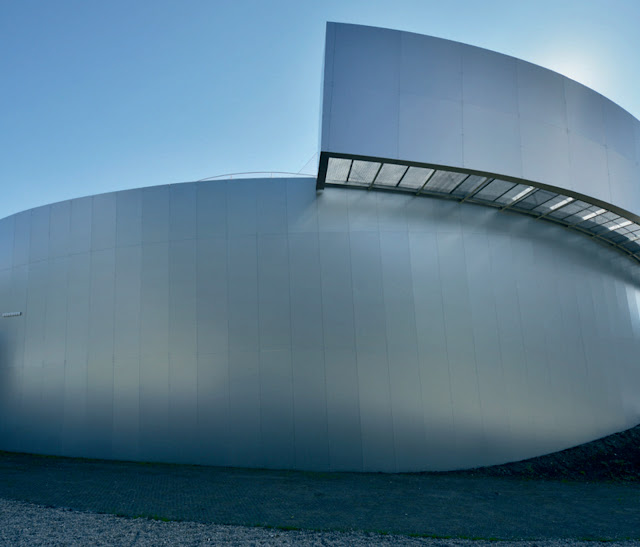 The entrenchment of the building into the surface on the other side gives a connection to its immediate surroundings. The spatial effects give the building the effect of artificial gravity from floatation and rotation. The building has two entrances- a main one to the central space from the square in front of the building on the south-eastern side and the northern entrance from the gravel surface above the stream. 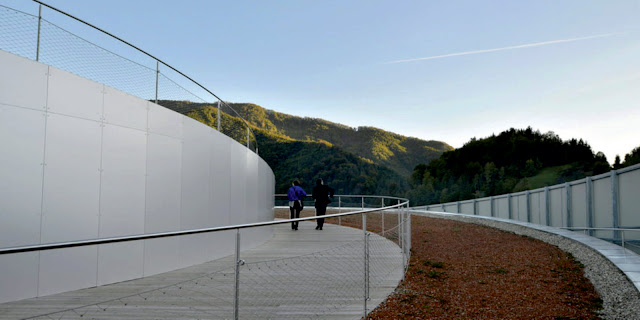 The main entrance covers the overhanging part of the bottom cylinder: one passes through a tight space past a circular vestibule and into the interior of the hall. The vestibule can be separated from the activities in the hall by a curtain. The entrance glazing can be completely opened and can connect the activities in the hall with the square. The circular hall for 300 people is surrounded on both sides by a semicircular ramp. 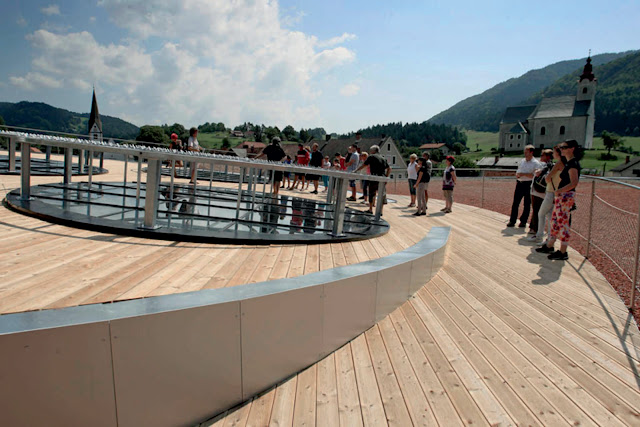 This denotes the beginning of the exhibition area, continuing from here to the overhanging part of the larger cylinder. On the west, there are smaller office areas along the ramp. Ascending this ramp also represents a transition from the bright space of the hall to the dark exhibition area. The vertical connection with a staircase and large elevator connects the exhibition area directly to the vestibule of the hall. 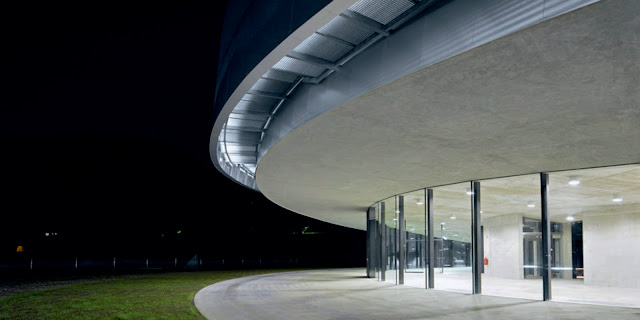 The exhibition space continues through the landing between the elevator and the staircase to the smaller cylinder, the multi-purpose hall, and a raised auditorium above the hall. From here, one can observe the activity below. The smaller cylinder is concluded at the highest, northernmost portion with a club area devoted to researchers of the history of space technology, where they can focus on their work aside from the activities below. 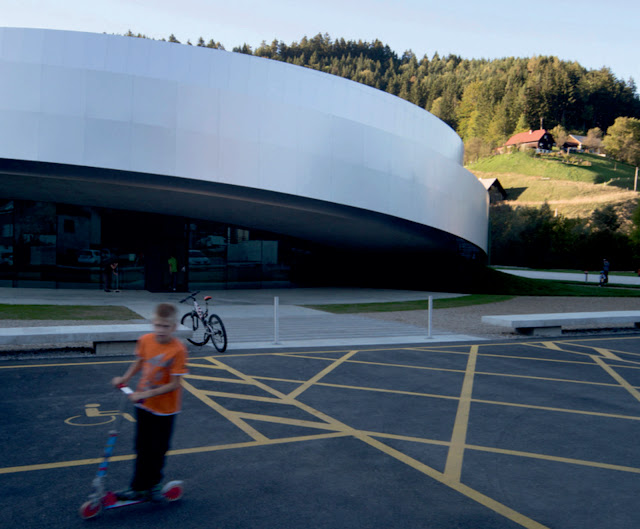 Besides special programme and location also collaboration of four architectural offices in developing the project is unique. The idea of collaboration raised on the first meeting where investor invited the four offices to collaborate on internal competition – and office principals decided to actually rather do the project together. The idea concepts came out on serious of workshops, later project was shared in different stages of development between all offices.