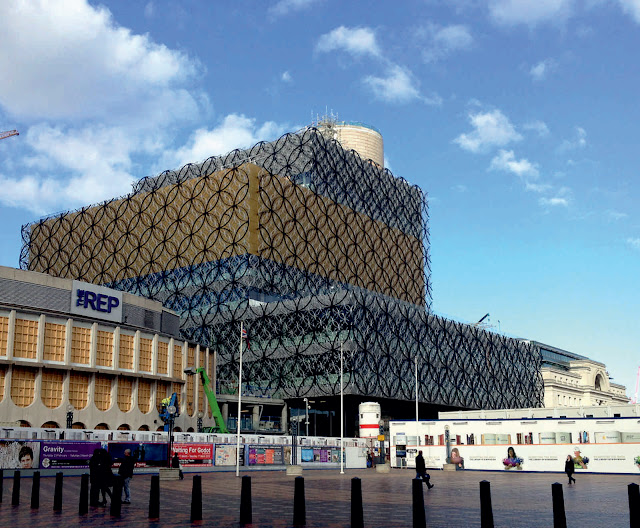 Centenary Square, the largest public square in the heart of Birmingham, currently lacks cohesion or a clear identity or atmosphere.  Mecanoo’s design transforms the square into one with three distinct realms: monumental, cultural and entertainment. 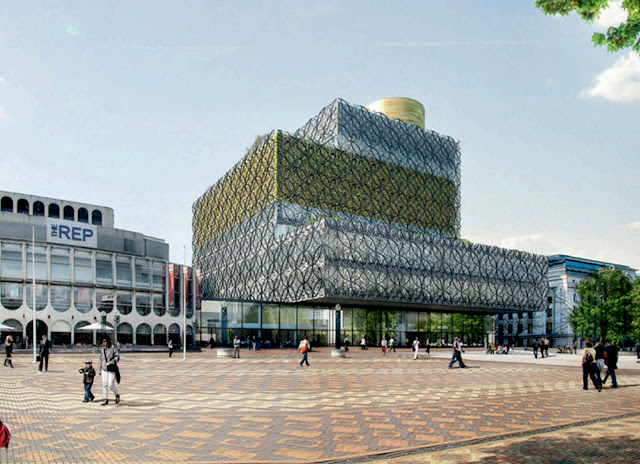 These palazzos form an urban narrative of important periods in the history of the city; The Repertory Theatre (REP), a 1960s concrete building, the Library of Birmingham, designed in 2009 and Baskerville House, a listed sandstone building designed in 1936. The busiest pedestrian route in the city, what Mecanoo calls the red line, leads pedestrians into Centenary Square. 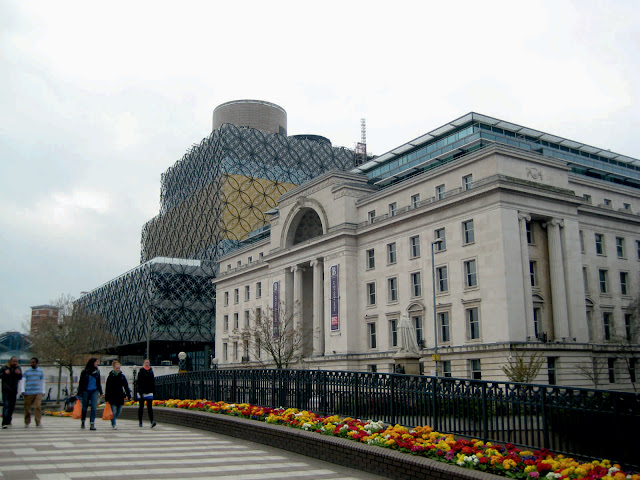 The cantilever of the library is not only a large canopy that provides shelter at the common entrance of the Library of Birmingham and the REP, but additionally forms a grand city balcony with views of the events and happenings on the square. 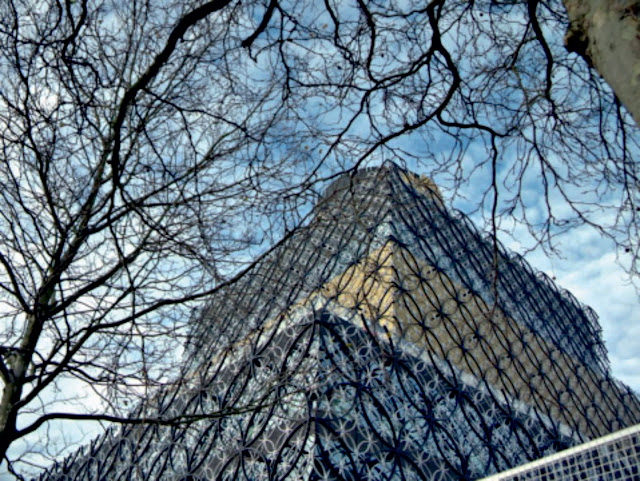 The Library of Birmingham is a transparent glass building. Its delicate filigree skin is inspired by the artisan tradition of this once industrial city. Elevators and escalators dynamically placed in the heart of the library forms connections between the eight circular spaces within the building. 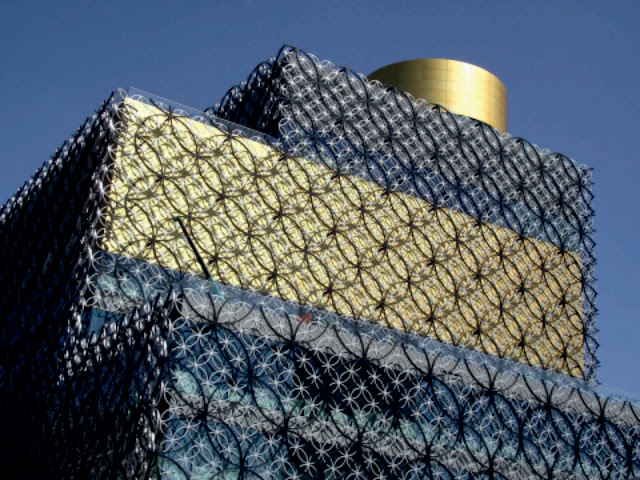 These rotundas play an important role not only in the routing through the library  but also provide natural light and ventilation. The rooftop rotunda houses the Shakespeare Memorial Room, designed in 1882. This Victorian reading room is lined with wood from the first Birmingham Central Library. 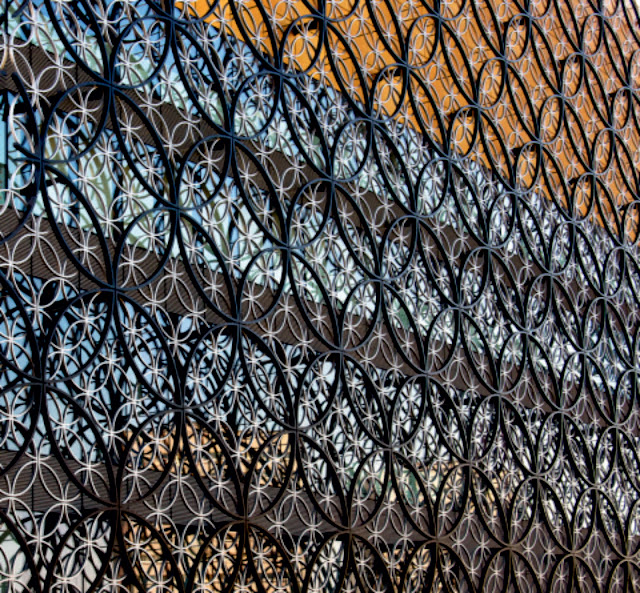 Its prominent position as a rooftop aerie makes this delicate room visible from the square. The REP with its unique and beautiful auditorium will be renovated. New workshops, staff accommodations and a shared theatre and foyer space will be created for both the REP and the library. 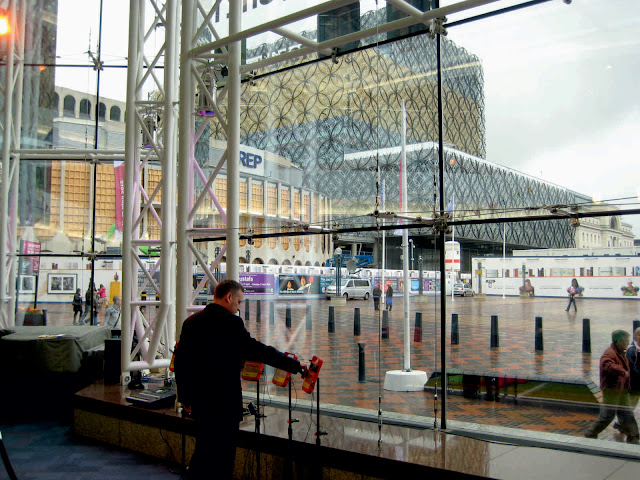 The Library of Birmingham is a BREEAM excellent rated building and incorporates grey water systems and ground source heat pumps. Although the Library is a transparent building, it maintains energy efficiency through the buffering capacity of the building mass and the atria. 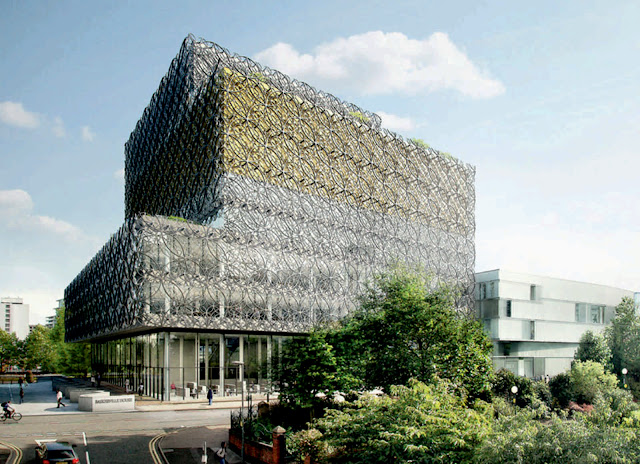 Sun shading and reflective materials within the facades block the harsh rays of the sun during the height of afternoon while allowing natural daylight into the interiors. The ground floor benefits from the mass of the soil which provides buffering and insulation. The circular patio cut out of the square creates a protected outdoor space and invites daylight deep into the building. 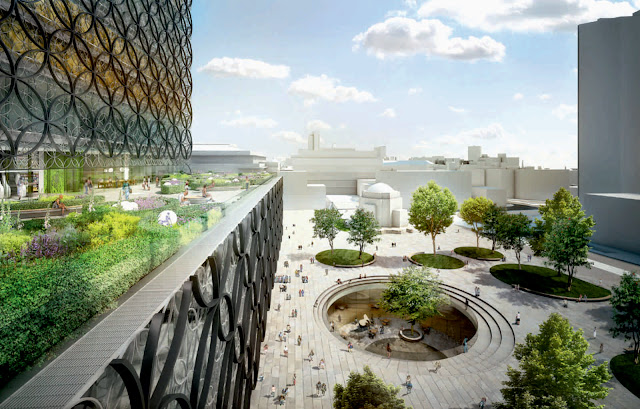 The building will incorporate a mixed mode and natural ventilation strategy. The façade will respond to external conditions and openings will allow fresh air intake and outflow. The addition of soft landscaped roof spaces will further enhance the immediate surrounding conditions. 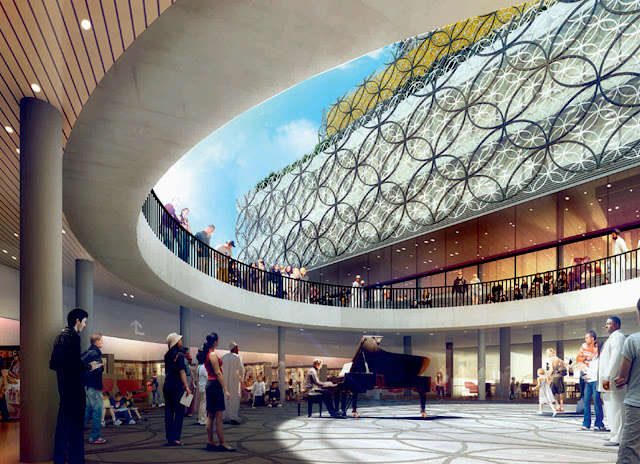 Mike Whitby, Leader of Birmingham City Council commented: “The new Library of Birmingham will be an iconic landmark, and a testament to the role we will play in the 21st century as a truly global city…. We are juxtaposing culture and regeneration on a far greater scale than any other UK city…. Already people are excited about the confidence we have in our future, and want to be a part of our story…. This is excellent news for Birmingham, and I look forward to enjoying the new Library and Repertory Theatre when they open in 2013.”