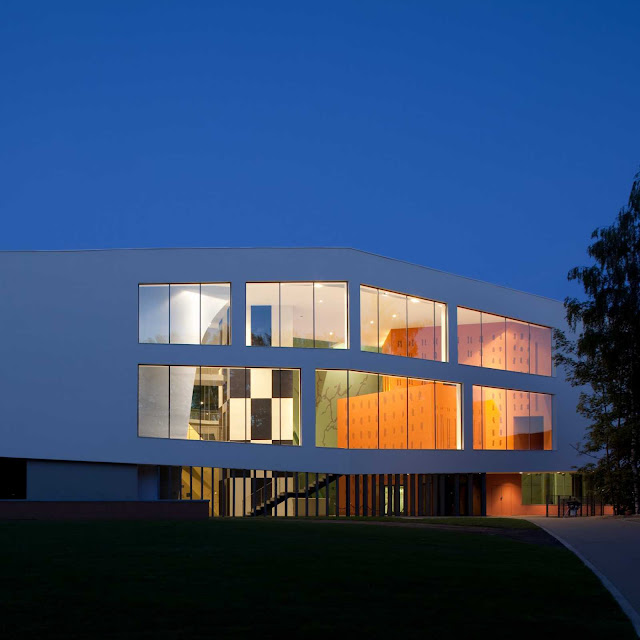 An elongated prism floats in the forest while a footbridge connects it to the city. Vast bay windows seem to suggest comic strips spaces, while the prism offers a colorful oneiric and fancied hall. This large reception area accommodates the four exhibition volumes also linked with each other via footbridges. 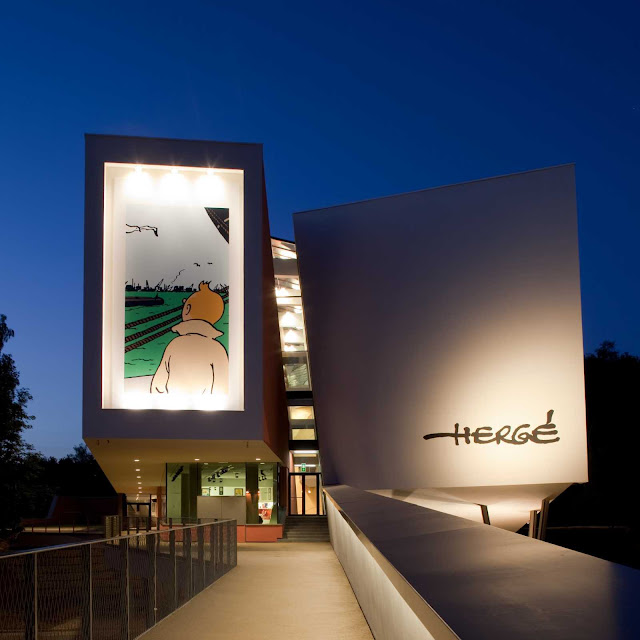 “It was at the close of the exhibition, organized by the Pompidou Centre about me in 1996, that I met Fanny and Nick Rodwell. They had seen the exhibition, liked it, and wanted to talk to me about their project for the Hergé Museum.

It was wonderful as Hergé had not only cradled and enchanted my own childhood, but he was also cradling and enchanting the childhood of my children. My first ever drawings, when I was about four or five years old, were of Captain Haddock. 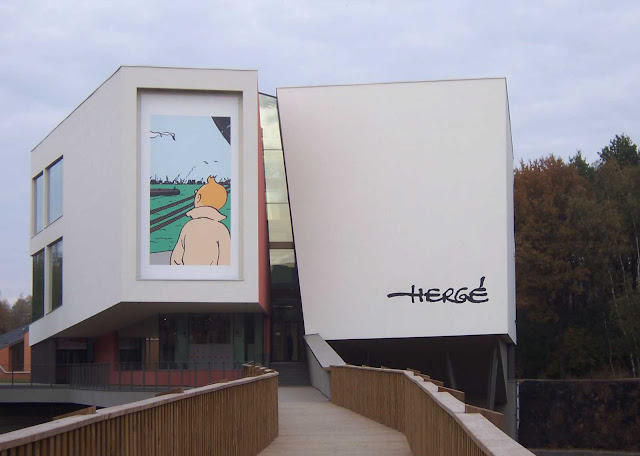 When it comes to my primary architectural motifs, I realise now that they were inspired by the menof-war (the Unicorn), boats, yachts, junks, hows and cargo steamers that sail through the adventures of Tintin, Snowy and Captain Haddock.I remember them in the same way as I might remember old poems, far away in the recesses of my memory. 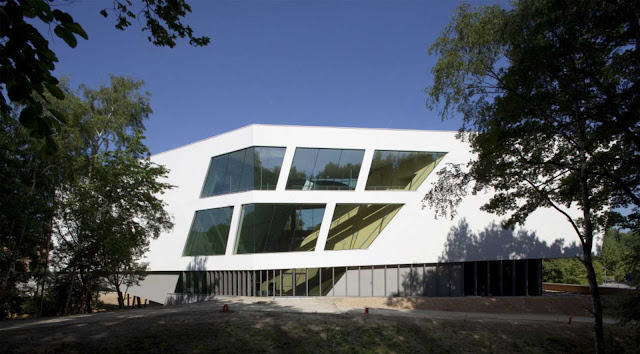 It would take another seven years before the first sketches and the first model of the museum appeared in 2003. Seven years during which there was time for relations between Fanny and Nick Rodwell and myself to grow, to become stronger and more refined with mutual confidence and complicity. Time for us to make sure that we were speaking the same language. 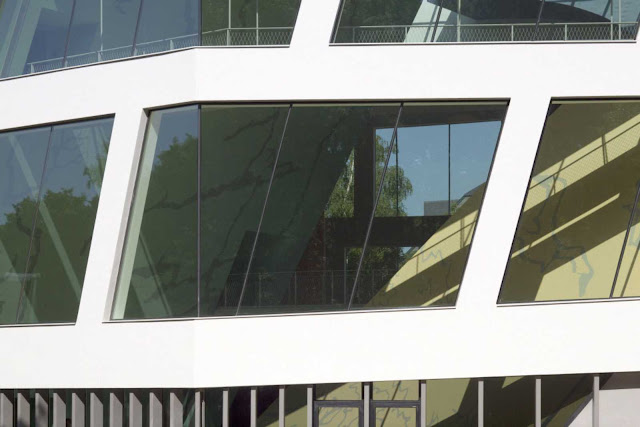 This sense of collaboration was, throughout the project, shared by Joost Swarte, who was in charge of the scenography, and Walter de Toffol, our building contractor. Louvain-la-Neuve is built on a straight-edged concrete slab with a car park underneath. 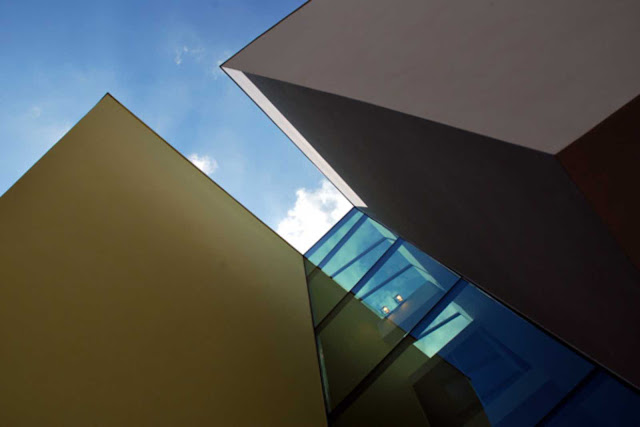 It immediately seemed like a good idea to disengage the museum from the town, better to move it away a little towards the woods. In this way, bathed in the light streaming through the large bays, the visitor is confronted with “four landscape objects”, which correspond to the general layout and Joost Swarte’s scenography. 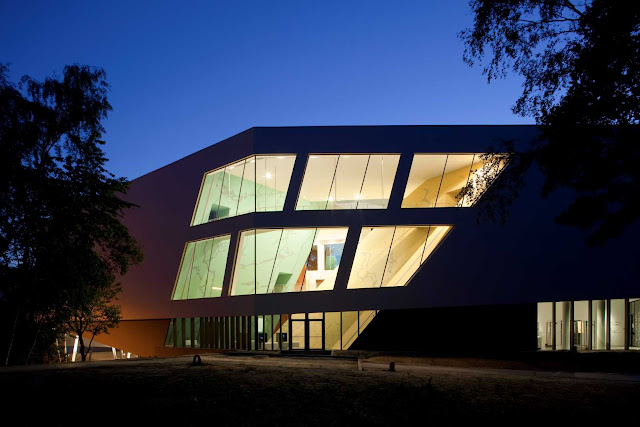 Each of these objects has its own personality; each is a kind of character. Each has a specific sculptural form, colour and unique design. Each displays an aspect, disproportionately enlarged, derived from Hergé’s drawing style. One traces Tintin in America, another King Ottokar’s Sceptre… 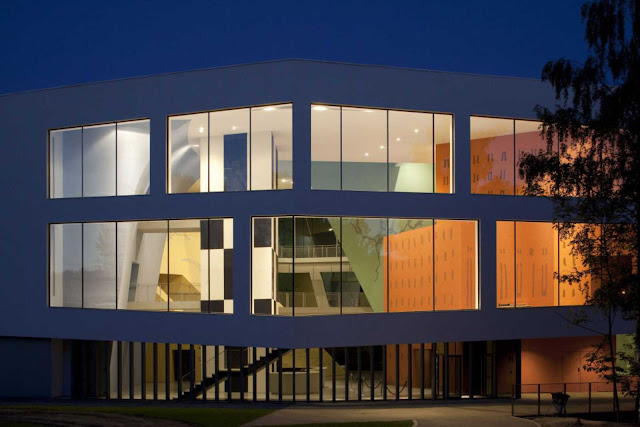 To these four “objects”, we can add a fifth: the lift shaft, vertical and coloured in white and blue, which I had first imagined as red and white, but which Fanny found too literal. What is clear to me, now that the museum exists, is that there were infinite sources of inspiration for the project. 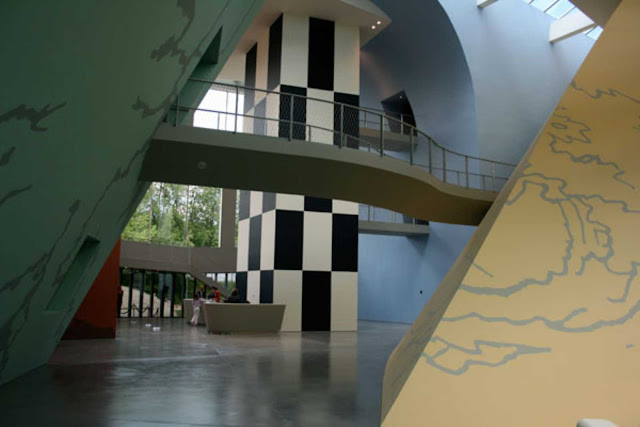 There was the programme of exhibitions, of course, and the constant discussions with Fanny and Nick Rodwell, as well as the work of Hergé in all its dimensions of course: its identity, its individuality, its unique character. I said to myself, from this point on, that the museum was obviously a tribute to Hergé, but also as much a game played with Hergé, or a letter to Hergé.”