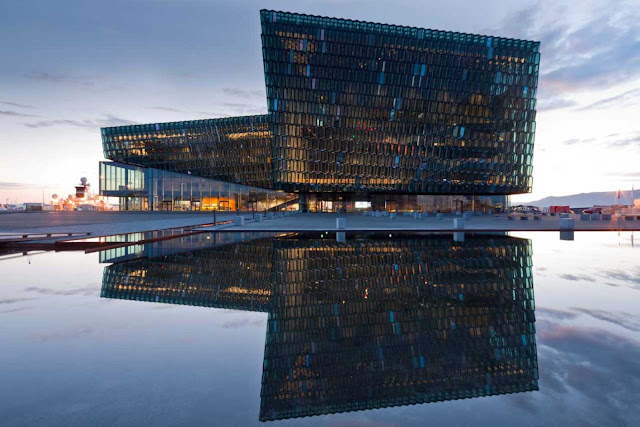 Situated on the border between land and sea, the Concert Hall stands out as a large, radiant sculpture reflecting both sky and harbour space as well as the vibrant life of the city. 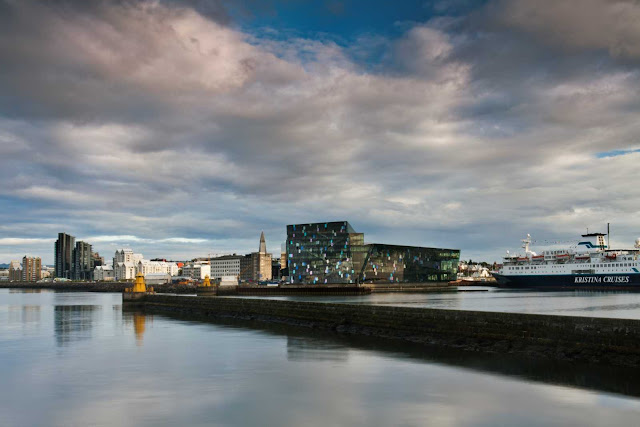 The Concert Hall of 28,000 m2 is situated in a solitary spot with a clear view of the enormous sea and the mountains surrounding Reykjavik. The building features an arrival and foyer area in the front of the building, four halls in the middle and a backstage area with offices, administration, rehearsal hall and changing room in the back of the building. The three large halls are placed next to each other with public access on the south side and backstage access from the north. The fourth floor is a multifunctional hall with room for more intimate shows and banquets. 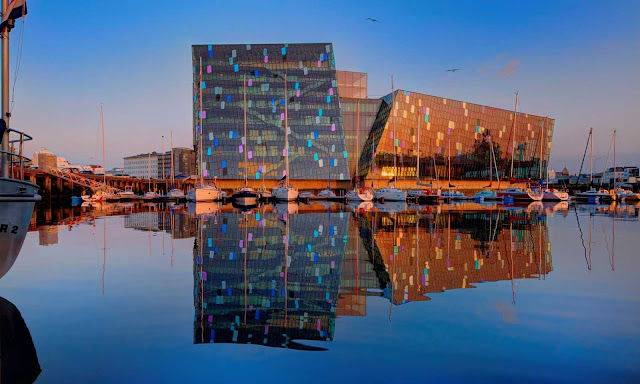 Seen from the foyer, the halls form a mountain-like massif that similar to basalt rock on the coast forms a stark contrast to the expressive and open facade. At the core of the rock, the largest hall of the building, the main concert hall, reveals its interior as a red-hot centre of force. The project is designed in collaboration with the local architectural company, Batteríið Architects. 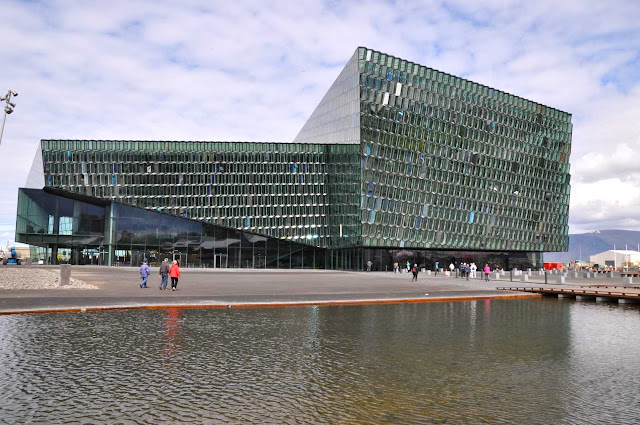 Harpa – Reykjavik Concert Hall and Conference Centre forms part of an extensive harbour development project in Reykjavik, the East Harbour Project. As the name indicates, the overall objective of the project is to expand and revitalise Reykjavik’s eastern harbour with a new downtown plaza, a shopping street, a hotel, residential buildings, educational institutions and mixed industry. The overall intention is to generate life in the area and to create a better connection between the city centre and the harbour.

Situated outside the city’s building mass, the building will become a significant icon in the city – a visual attractor with a powerful and varying expression. The isolated location will mean that, to a great extent, the changing climatic and light effects will be exposed in the facades of the concert building, often in contrast to the narrow and shady streets in the rest of the city. As the rest of the building, the design of the facades is inspired by nature. In particular, the characteristic local basalt formations have provided the inspiration for the geometric facade structure. 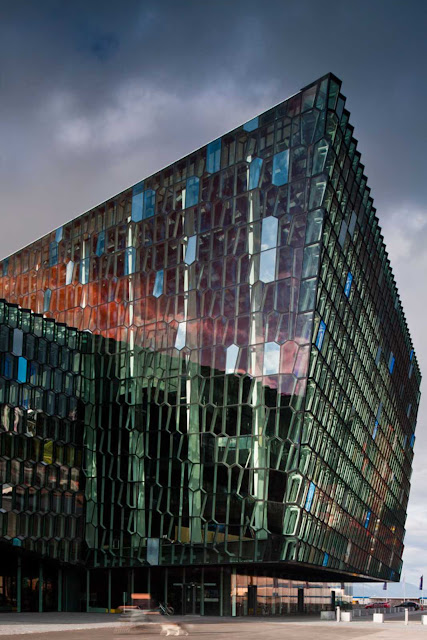 Made of glass and steel in a twelve-sided space-filling geometric modular system called the ‘quasi-brick’, the building appears a kaleidoscopic play of colours, reflected in the more than 1000 quasi-bricks composing the southern facade. The remaining facades and the roof are made of sectional representations of this geometric system, resulting in two-dimensional flat facades of five and six-sided structural frames. In order to develop these ideas the team worked with three-dimensional computer models, finite element modelling, various digital visualisation techniques as well as maquettes, models and mock-ups. 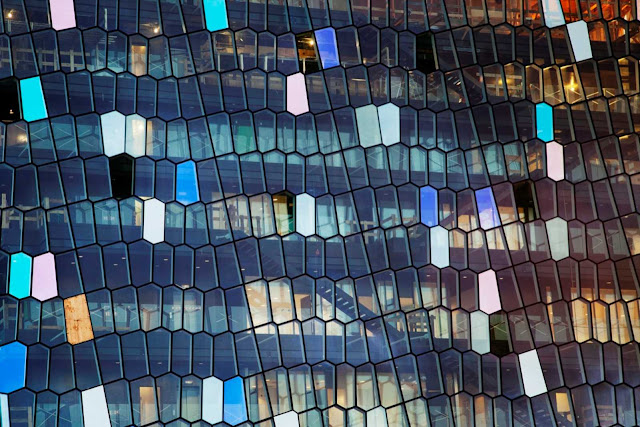 Light and transparency are key elements in the building. The crystalline structure, created by the geometric figures of the facade, captures and reflects the light – promoting the dialogue between the building, city and surrounding landscape. One of the main ideas has been to “dematerialise” the building as a static entity and let it respond to the surrounding colours – the city lights, ocean and glow of the sky. In this way, the expression of the facade changes according to the visual angle. With the continuously changing scenery, the building will appear in an endless variation of colours. 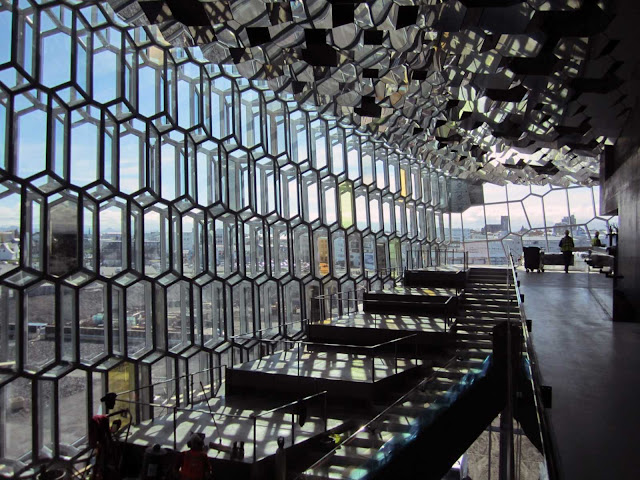 The Concert Hall and Conference Centre is part of an extensive harbour development project in Reykjavik – the East Harbour Project. The project was initiated in 2004 as an PPP competition, which means that the competing project groups – consisting of both private and public parties – are responsible for investments, construction and operations themselves. However, due to the difficult economic situation that Iceland has found herself in since autumn 2008, the municipality of Reykjavik and the Icelandic Government has attended to the completion of the project themselves. 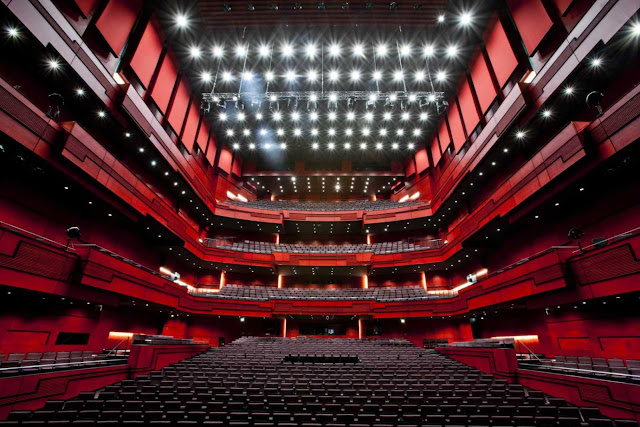 Henning Larsen Architects applied for the prequalification and won the competition together with the team Portus Group consisted of the contracting company IAV, the operating company Nysir, private investor Landsbanki, the engineering company Rambøll, the local engineers Mannvit, the local company Batteríið Architects, the artist Olafur Eliasson and the company Artec Consultants from New York providing consulting services in acoustics.

The extensive international collaboration has resulted in entirely new work processes in which a high degree of information sharing and communication has been a both demanding and rewarding dimension. In 2008, an exhibition at Reykjavik Visitor Centre has provided visitors with an insight into the process and the many different parties’ approaches and demands.