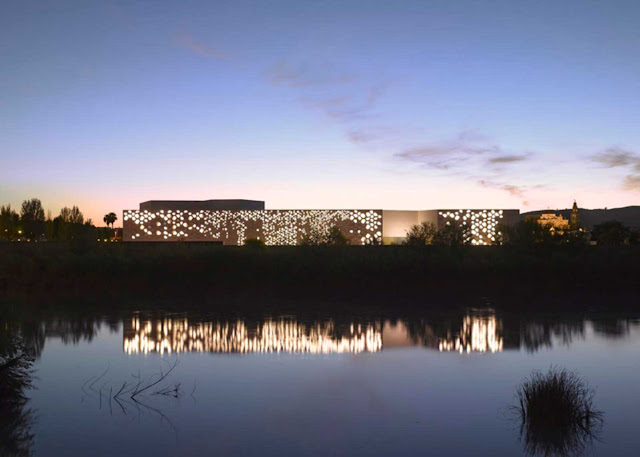 Architecture nourishes itself constantly from images hidden in our memory, ideas which become sharp and clear and unexpectedly mark the beginning of a project. Perhaps this is why the echo of the hispano-islamic culture which is still latent in Cordoba has subconsciously signified more than a footnote in our proposal. 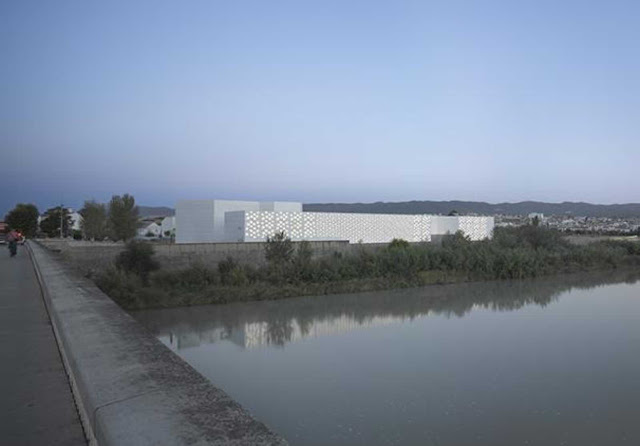 In the face of the homogeneity which our global civilisation imposes in all aspects of life, the Centre of Contemporary Art aspires to interpret a different western culture, going beyond the cliché of this expression used so frequently. Distrusting the supposed efficacy and flexibility of a neutral and universal container commonly used nowadays, let us image a building closely linked to a place and to a far memory, where every space is shaped individually, to a time which can transform itself and expand in sequences with different dimensions, uses and spatial qualities. 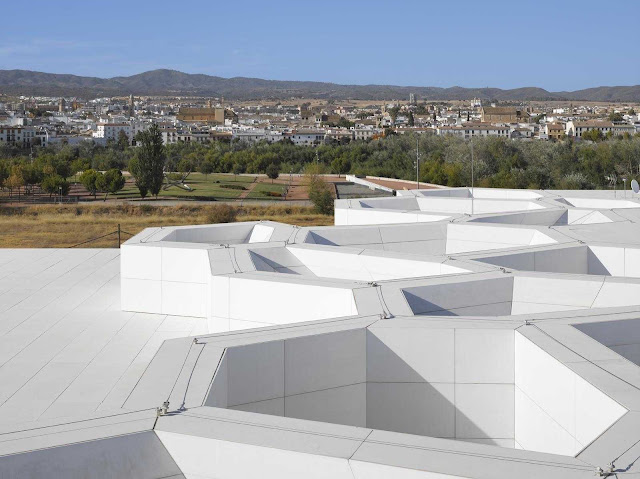 We have always been admirers of the hidden geometric laws through which those artists, artisans and master builders of a remote islamic past were capable of creating a multiple and isotropic space within the Mosque, a building facetted with vaults and muqarna windows, permutations of ornamental motifs with lattice windows, paving and ataurique decorations, or the rules and narrative rhythms implicit in the poems and tales of Islamic tradition. 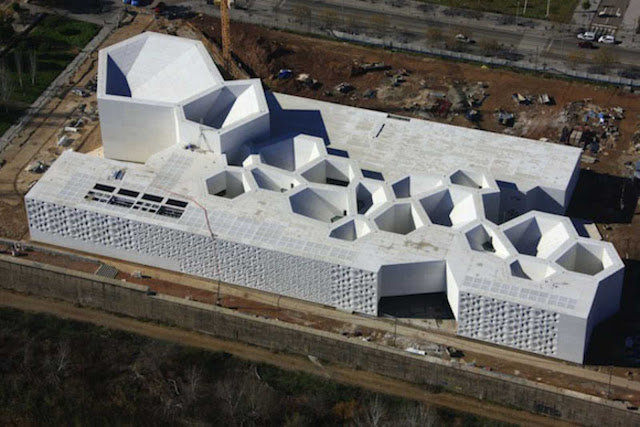 Like those literary structures which include a story within another story, within yet another… – a story without an end – we conceived the project as starting with a system, a law generated by a repeating geometric pattern, originating in a hexagonal shape, which in turn contains three different types of rooms, with 150 m², 90 m², and 60 m². Like a combinatorial game, the permutations of these three areas generate sequences of different spaces which possibly can come to create a single exhibition area. 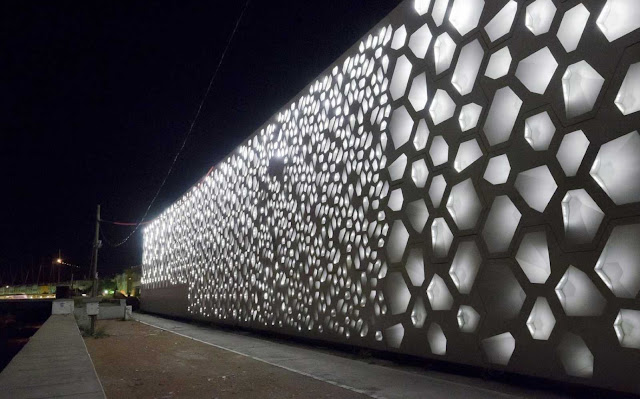 The artists’ workshops on the ground floor and the laboratories on the upper floor are located adjacent to the exhibition halls, to the point where there is no strict difference between them: artistic works can be exhibited in the workshops while the exhibition halls can also be used as areas for artistic production. The assembly room – the black box – is designed as a stage area suitable for theatrical productions, conferences, film screenings, or even for audiovisual exhibitions. 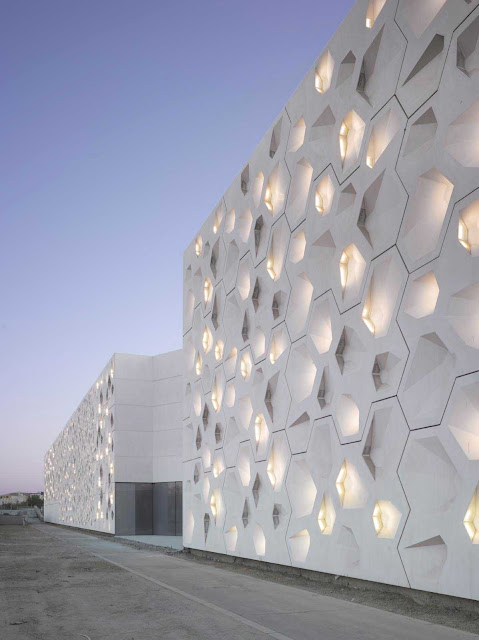 The Centre of Contemporary Art is not a centralised organism: its centre moves from one area to another, it is everywhere. It is designed as a sequence of rooms linked to a public walkway, where the different functions of the building come together. Conceived as a crossroads and meeting place, it is a communal area for exhibitions and exchange of ideas, to view an installation, see exhibitions, visit the café, use the mediateque, wait for the start of a show in the black box, or perhaps gaze at the Guadalquivir river. The materials will contribute to suggest the character of an art factory which pervades the project. 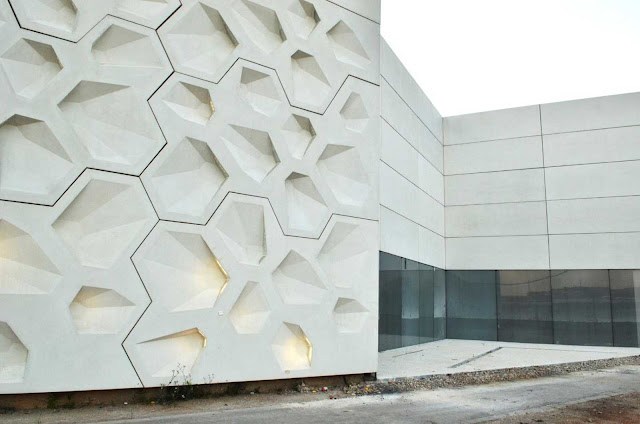 In the interior, walls and slabs of concrete and continuous concrete floors, establish a spatial area capable of being transformed individually using different forms of intervention. A network of electrical, digital, audio and lighting infrastructure creates the possibility of multiple views and connections everywhere. Outside, the building aspires to express itself through one material: GRC prefabricated panels that at the same time clad opaque and perforated façades, or make up the flat and sloping roofs of the halls. 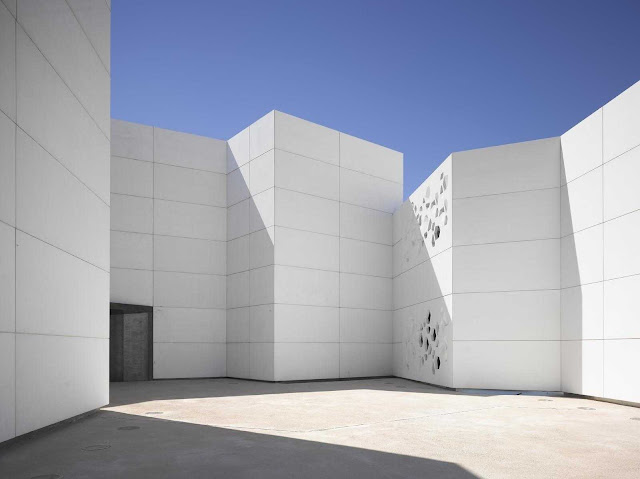 The industrialised concept of the system as well as the conditions of impermeability, insulation and lightness of the material, contribute to guarantee the precision and rationality of its execution but also plays a part in the combinatory concept which governs the whole project. The facade onto the river, a true mask that protagonizes the exterior facade of the building, is conceived as a screen perforated by several polygonal openings with LED-type monochromatic maps behind them.

With an appropriate computer program, video signals will generate images and texts that will be reflected on the river’s surface and enable installations specifically conceived for the place.. During the day, natural light will filter through the perforations and penetrate the interior covered walkway. In the Centre for Contemporary Art, artists, visitors, experts, researchers and the public, will meet as in a contemporary zouk, without an obvious spatial hierarchy. It will be a centre for creative artistic processes which will link closely the architectural space with the public: an open laboratory where architecture attempts to provoke new modes of expression. 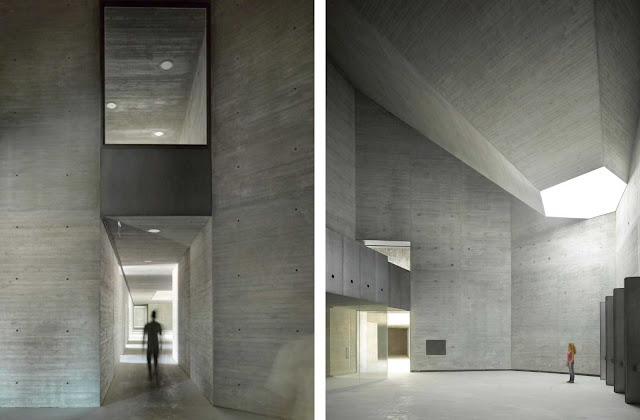 Some of the most recent artistic proposals linked to the most recent technologies appear to move away from materiality and submerge themselves in a virtuality disconnected from a concrete place, but perhaps through it, disagreeing with this interpretation – which has become a commonplace – we are convinced that the building itself, the Guadalquivir river, the present and the past of Cordoba, will not simply be a casual circumstance but – as it has been for us as well – will be the start of a dialogue, agreement, or perhaps rejection. For are these not also emotions which underlie the search for all artistic expression?