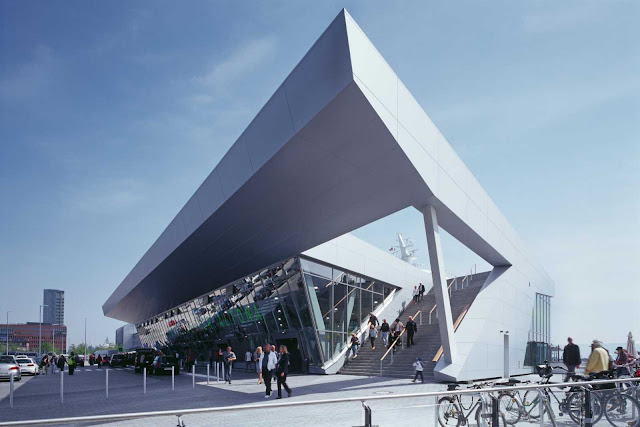 The Cruise Centre Hamburg is located near the “Fischmarkt” in Hamburg-Altona, between the former England Ferry terminal and the emblematic Dockland building. 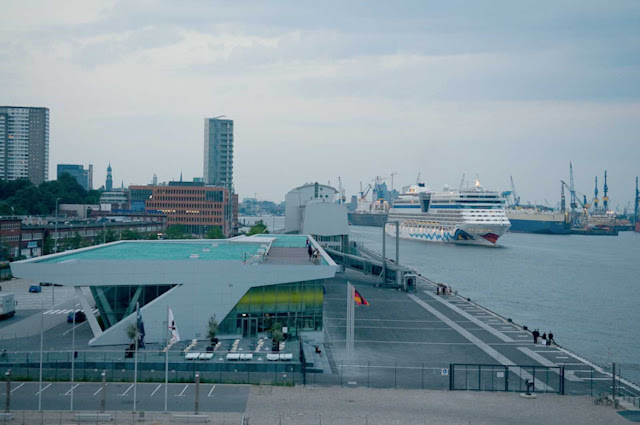 At one end, the building’s elongated linearity fits in with urban developments on the banks of the River Elbe; at the other, where it nears the Dockland Building to the west, there is a substantial increase in volume.

The Dockland office block remains a solitaire building. The layout, cross-section and elevation of the terminal and Dockland are linked by a geometric device. 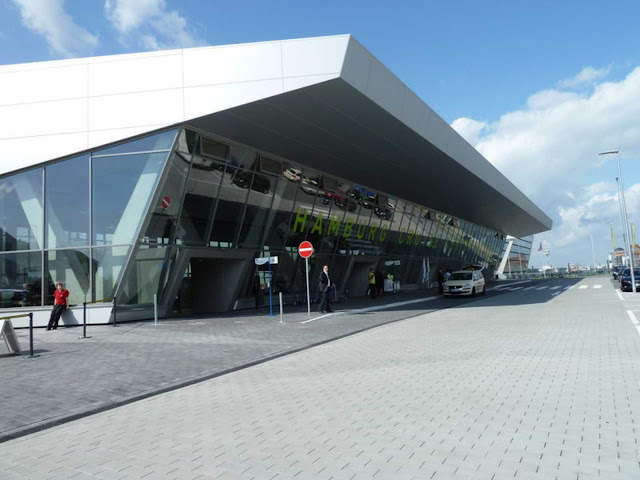 The terminal’s complex shape, evolving from a visual reference to the “Altonaer Balkon” – a nearby public park – and a welcoming gesture towards visitors arriving from water and land, offers a myriad of views over the river and further into the port. 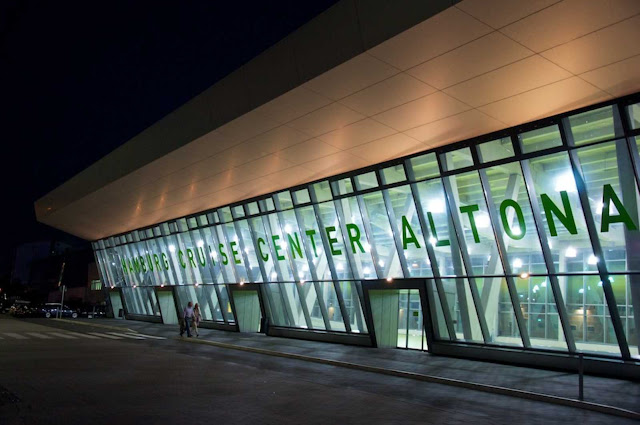 Broad stairs lead from the western entrance area to the public “farewell deck”, where people welcome or bid farewell to the cruise ships. This roof terrace, the “fifth façade”, is Hamburg’s new visiting card and is visible from the “Altonaer Balkon”, from the Dockland building, and, most importantly, from the cruise ships. 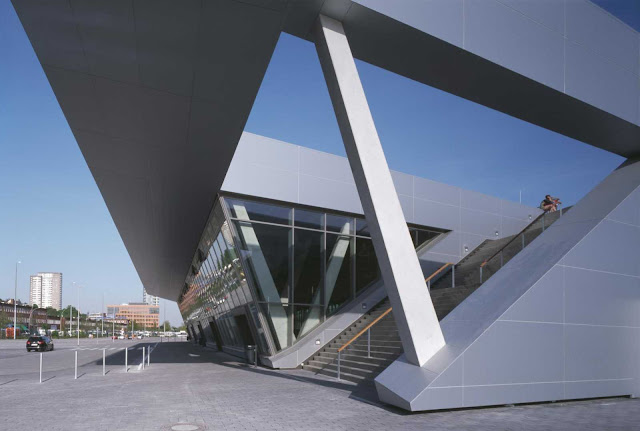 The new cruise center takes on a self-confident yet unifying position, between the two solitaire buildings in Hamburg’s “pearl neck-lace”. The sculptural character of the volume is enhanced by its metallic, sharp-edged, lightsilver cladding in AlucoBond® Anodized Look. 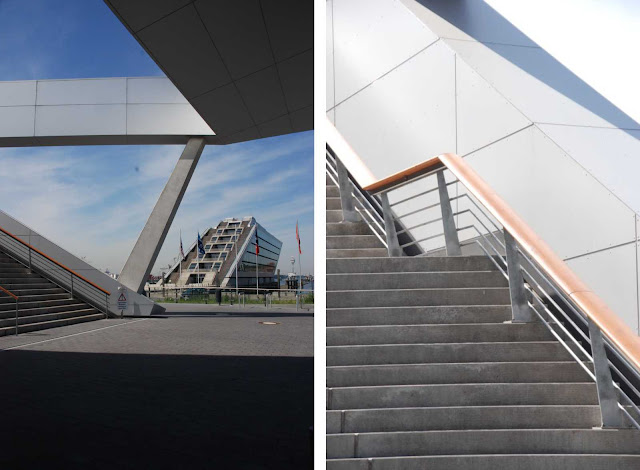 Green print on the window glazing acts as sun protection and gives the glass, which can appear somewhat dark during the daytime, a fresh and vibrant touch. The cantilever roof and the sloped entrance front formulate a strong inviting gesture and a dynamic link to the ship. 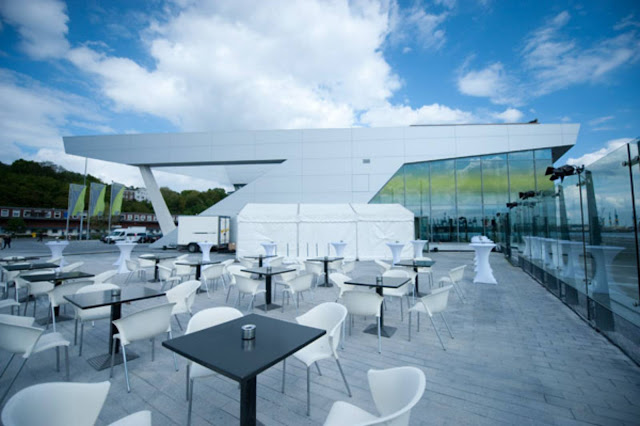 The terminal hall is a 1 538 m² open-plan space which guarantees multifunctional use and can even act as venue for events. All side rooms lead off from the main hall. 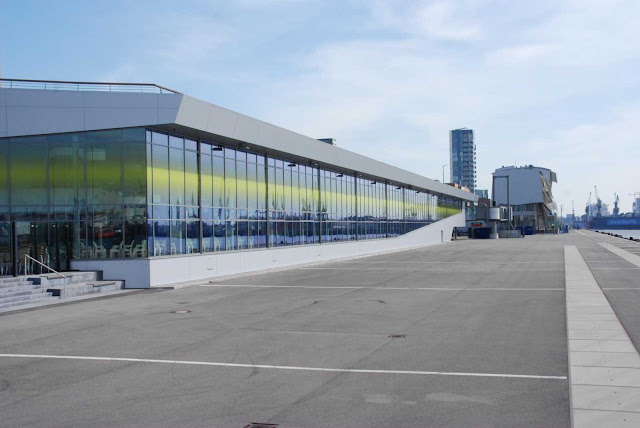 The terminal hall itself stands out from all others as it has a long access ramp for the disabled leading to the gangway. A 50 meter long ramp slowly extends out from the quayside until it is linked by a movable gangway to the cruise ships at a height of about 4 m. 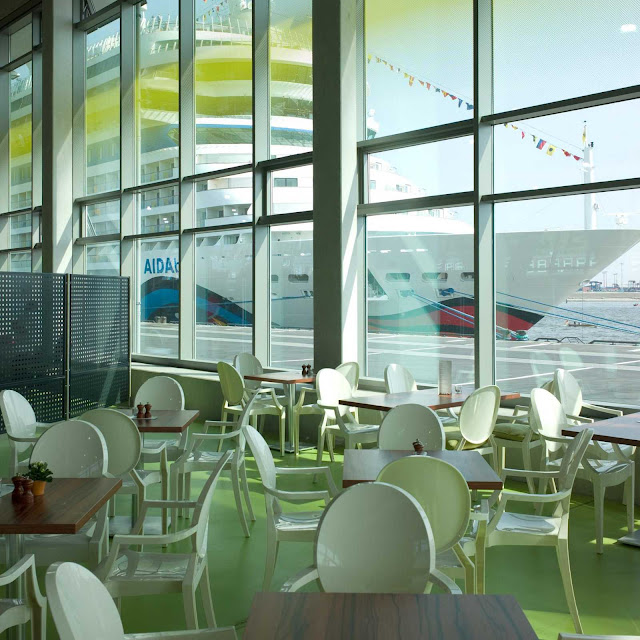 This connection means that many thousands of passengers can access the ships without requiring facilities such as escalators or lifts. The terminal’s bistro, with its balcony and broad frontage overlooking the river, faces southwest and is open all year round.