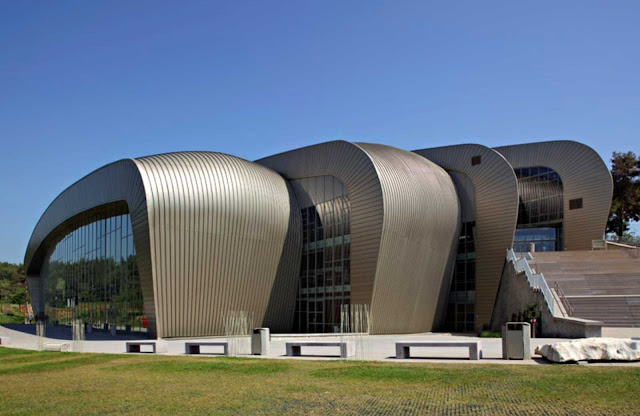 The town of Porec, opened in 2005 an architecture design competition to which the most complete proposal the new sport zone was submitted by the architecture team of the Faculty of Architecture in Zagreb. The team consisted of the lead architect professor Sonja Jurkovic, and architects Sanja Gasparovic, Natasa Martincic, and Tatjana Perakovic. 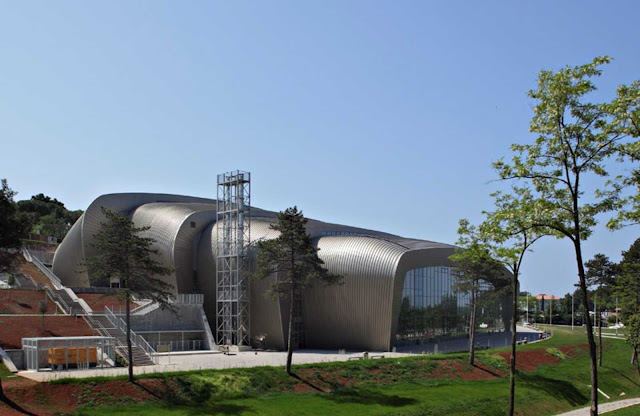 The winning proposal, respecting the ancient and baroque matrix of the town, placed the new sports centre on an empty area marking the new stage in the town’s 21st century development. The centre is located at the entrance to the town, at an intersection of the main roads encircling the back of the hill Zatika atop. The newly planned complex is connected with the existing sports infrastructure (the football stadium and the sports hall) and town center via public squares. 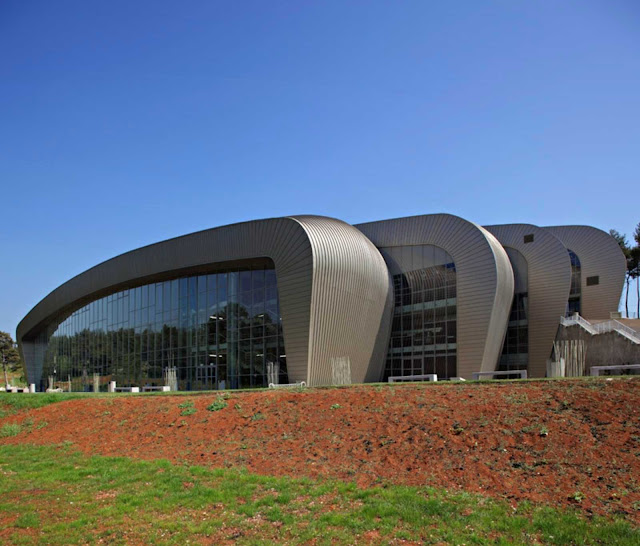 The choice of the location ensured that the new sports centre would be easily accessible to vehicles and pedestrians from both the surrounding areas and the centre of the town. The multipurpose sports hall Zatika, opened in 2008, is the first completed building in the new sports zone. Besides the sports hall, the construction of an indoor swimming pool, a football stadium, a hotel andtennis courts is planned. Access to all buildings is provided via a collector road running in circle around the hill. The building plot of the hall occupies 13.503 square meters. 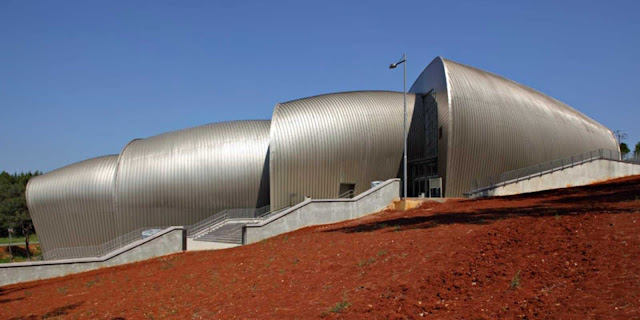 The Zatika hall was built as a venue for different types of events and shows, from sports to cultural ones. Its multipurpose function has already been achieved with the events such as the World Handball Championship for men, the Davis Cup match, the Vinistra wine fair, the ESDU World Dance Masters and the European Veterans Table Tennis Championship. Given the natural slope of the terrain, the hall was designed from a sectional view and adjusted to the slope of Zatika with a desire to make the space flow through it without blocking the views, but rather to open the views onto the sea, the town and the forest. The roof construction envelopes a single volume of the building with four broad lamellae which adjust to the terrain’s natural slope and create glass gaps in the roof. 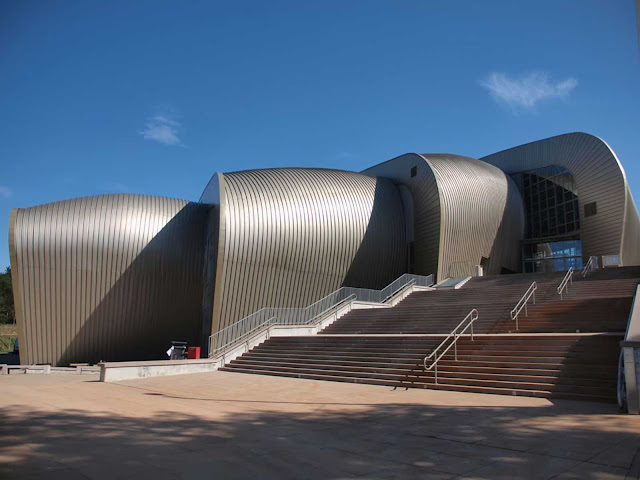 By covering the north and south facade with glass panels and sealing the east and west side with a roof construction, the impression was created as if the landscape was drawn into and flowed through the entire structure in the north-south direction, in addition to achieving sufficient sun exposure. The southern part of the building is semi-interred and the glass surface hidden away from sun exposure by a vertical wall rising up to the elevation of the access road. The position of access squares on the slope, the opening up of the building towards the town and the reception of visitors upon arrival were the factors which had influenced the floor plan to open up and form side gaps with wide entrance halls on different elevations. 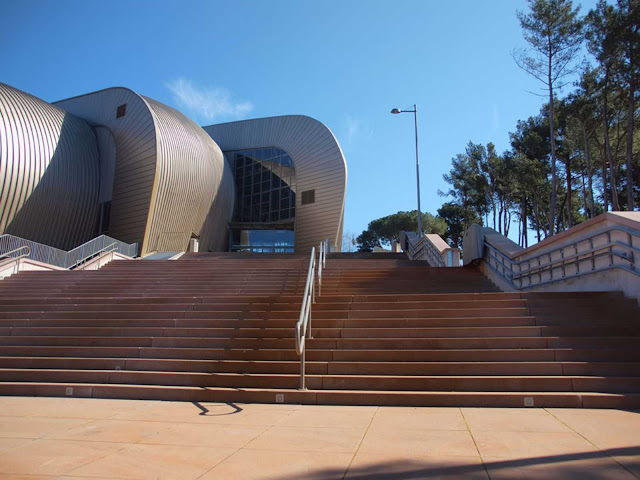 In this way the town became the background for every event taking place in the hall. By giving the building a shape of a composition of soft forms with a surface bending down the slopes of the natural terrain, it was possible to fit this structure of huge dimensions into the landscape and the town. The shape of the building called for a minimalist approach in the design of the outside area as evident in the choice of materials (concrete slabs) and the plantation of monochromatic indigenous plants. 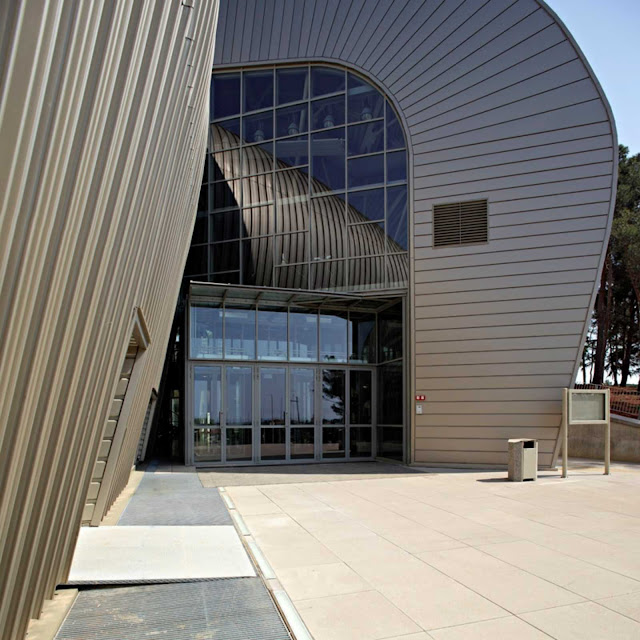 Basic dimensions of the hall floor plan are 80×100 m at its widest point. The surface of the hall is 6,430 square meters, with gross surface amounting to 14,100 square meters. The value of the investment is 16,000,000 â‚¬. The hall has four levels of which the main one is the level “0` with the entrance hall from which there is a descent to the main hall with an auditorium. The level “-2` contains sports courts, warming up hall, fitness room, locker rooms, coach quarters and the area for technical support. . 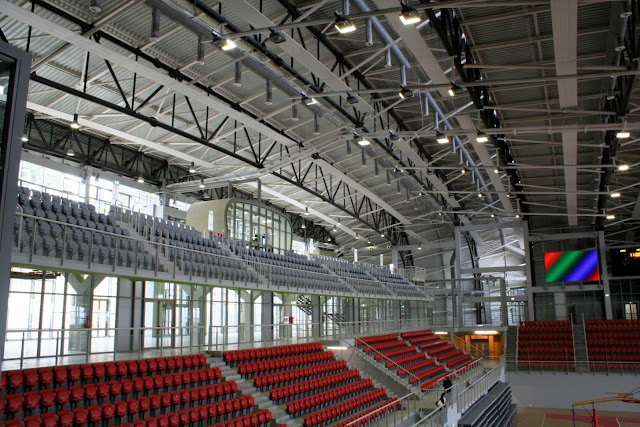 The arena has a dimension of 45×45 m and can host two parallel handball courts in the north-south direction, or basketball and tennis courts. The auditorium of the main hall consists of a fixed seating area on three sides of the sports court (east, south and west) and the auditorium balcony situated above the fixed south stands. Should large events require so, telescopic stands can be extended from underneath the fixed south stands, whereas portable stands may be assembled at the north front. The overall capacity of the auditorium is approximately 4,000 seats. From the entrance hall with two large stairways there is a descent to the level “-1` containing a cloakroom for visitors, sanitary facilities , catering facilities and club quarters. 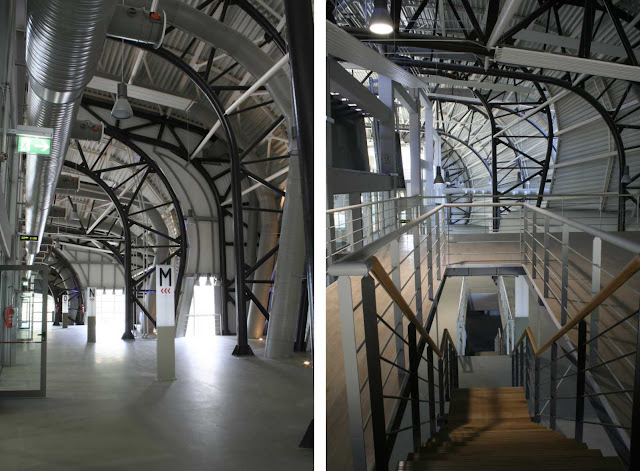 Due to the large span of the hall – 64.00 m – a steel arch construction was chosen for the vaulting. The roof construction descends to the elevation of the level “0 and forms side walls, whereas the levels below are constructed as spatial ferroconcrete constructions. The building’s roof is bent in two directions and follows the bending of the steel roof construction. For paneling the roof and ferroconcrete slanted side walls a unique aluminum „membrane“ was chosen, colored in a light bronze shade in order to maintain the historical continuity of the Porec heritage. 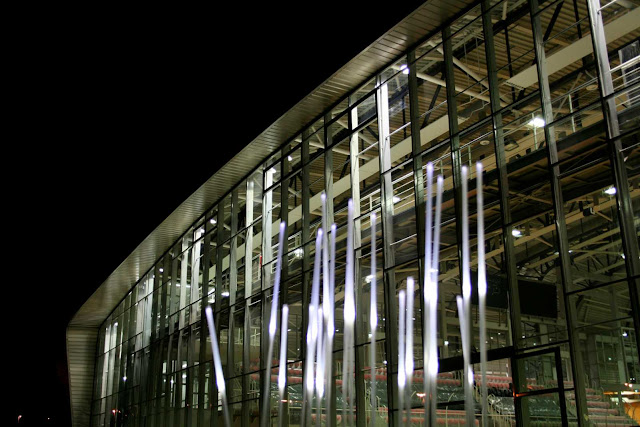 The main sports hall is separated from the entrance hall on the level “0` by glass walls for the purpose of physical and sound insulation. The aerial space stretches from the elevation of the sports grounds on the level “-2` all the way up to the roof construction. The concept of creating an airy interior and the choice of constructive materials like concrete and steel arch carriers inspired the idea to use the structure itself, as well as the infrastructure channels, as interior decor. The simplicity of materials used in interior design emphasized the rich shapes of visible constructions. 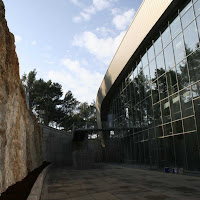 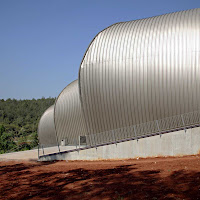 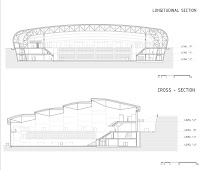 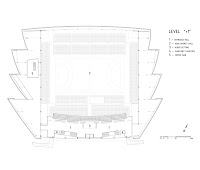