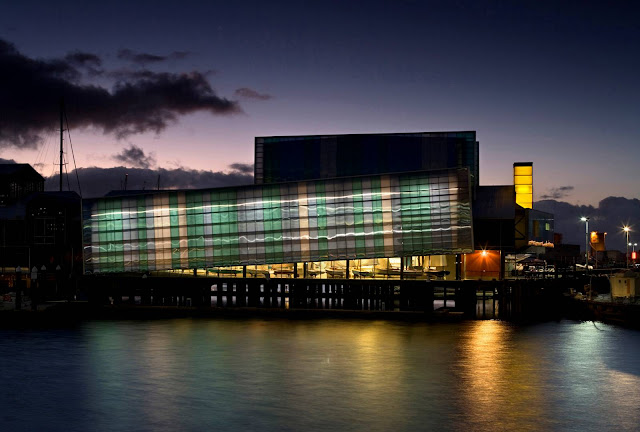 This is an extension to the NZ Maritime Museum in Auckland, which is designed as an exhibition building for NZL32, the yacht which first won the America’s Cup for New Zealand. 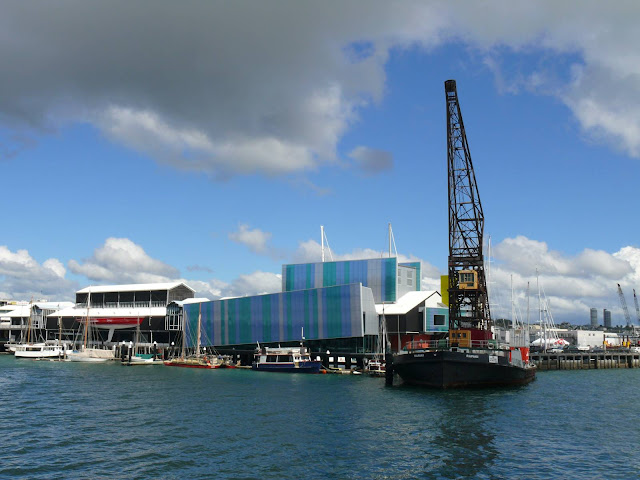 NZL32 is suspended within the existing buildings, and takes its place within an exhibition entitled ‘Blue Water Black Magic’, a tribute to the life of Sir Peter Blake, the round-the-world yachting legend who managed the Cup campaign and who was shot to death in 2002 on an environmental expedition along the Amazon. 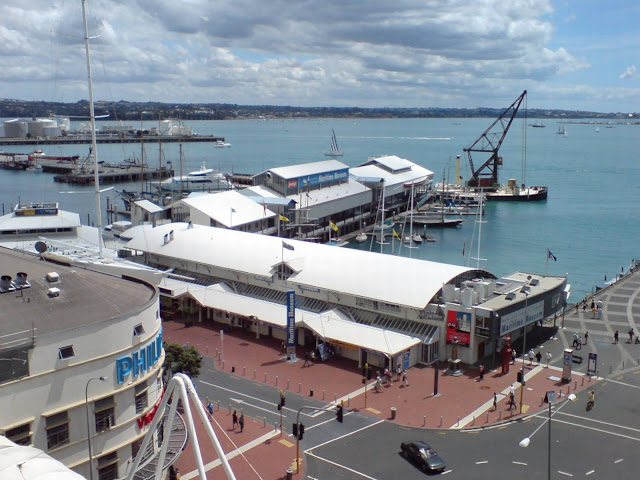 To the east of the existing wharf a new extension floats over the sea. A series of beautiful small yachts portraying the history of New Zealand yachting occupy the extension. Large planes of polycarbonate cladding explode the traditional form of the sheds. 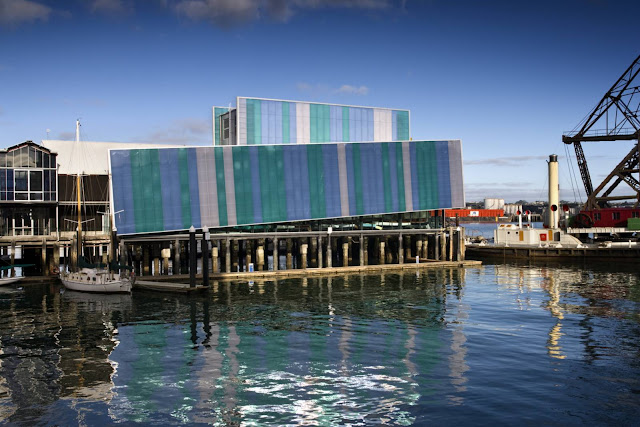 Subtle shifts away from the orthogonal, combined with the variety of colour, transparency and reflectivity of the polycarbonate, suggest the ephemeral and constantly shifting conditions in which these thoroughbred yachts exist, as well as offering enticing and partially concealed glimpses of yachts from the outside. 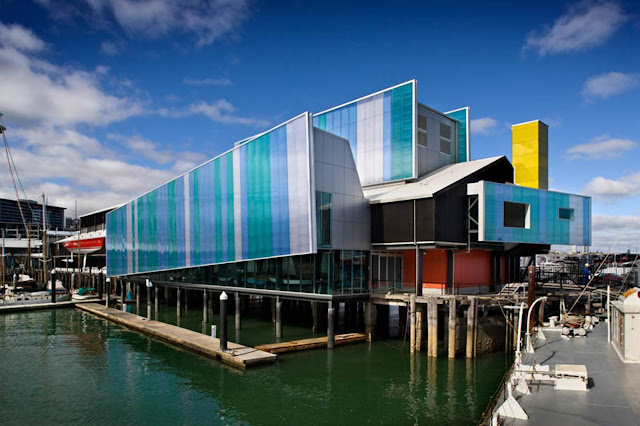 The building is located opposite the busy Princess Wharf, home to many bars, restaurants and apartments. Completed in 2009 the building has become a focus of attention during the day and even more so at night when lighting will emphasise the transparency. 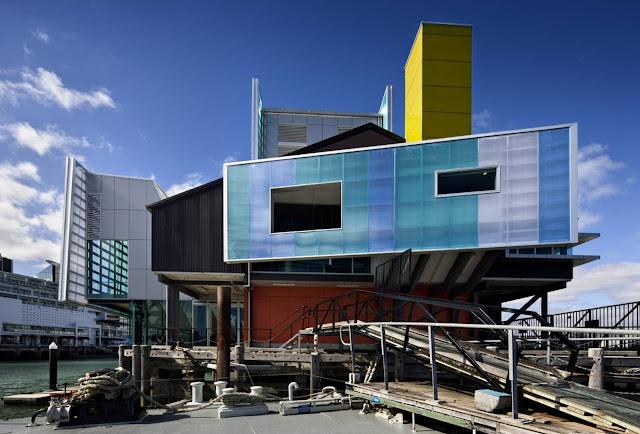 The alteration expands the building outwards and upwards, in a series of planes which explode the traditional form of the sheds. To the east an extension pushes over the sea, housing a series of beautiful yachts portraying the history of New Zealand small boat sailing. The existing sheds remain expressed – at night the large plane becomes a huge light box with magical effects across the water. 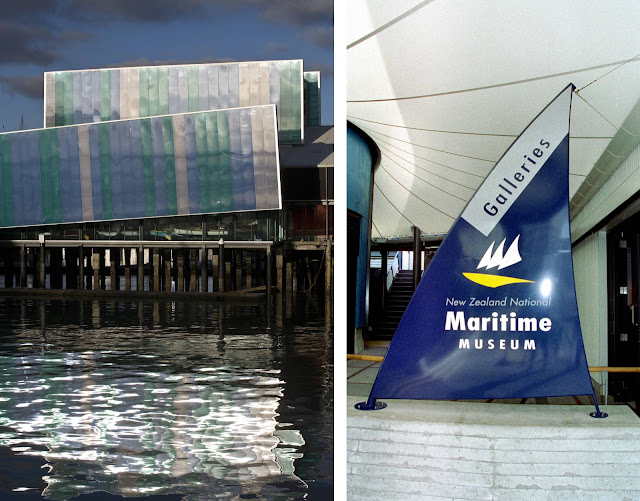 Planes of polycarbonate cladding contrast with the traditional buildings. Shifts from the orthogonal, combined with changing colour-shifts and transparency /reflectivity of the polycarbonate, suggest the ephemeral conditions of wind, light and swell which are integral to the yachting experience. Slithers of glazing partially reveal the exhibits from outside, and the sea from within. 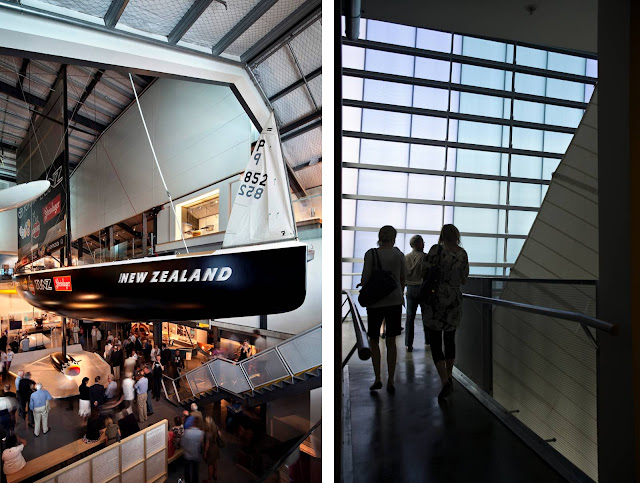 Natural light provides rippling surfaces inside and suggests the sailing environment. Spaces glow with the softly transmitted light passing thought the double-skin multi-cellular polycarbonate, which has good UV and thermal protection properties. Visitors are confronted by the powerful form of the black hull hovering in space above. Instead of the usual ugly cradle, the boat is suspended from its own rigging 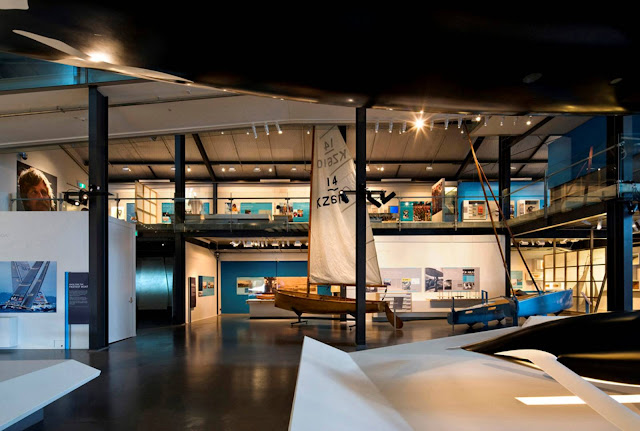 An extended architectural promenade leads from the main space out to the wharf edge, and onto the ramp which winds up past the small boats, in the soft light and dappled reflections from the sea, then back into the main space to continue climbing, this time around NZL32 and up to the high point where the Americas Cup is displayed. Along this 100m ramp the visitors experience numerous displays and viewpoints of the yachts. 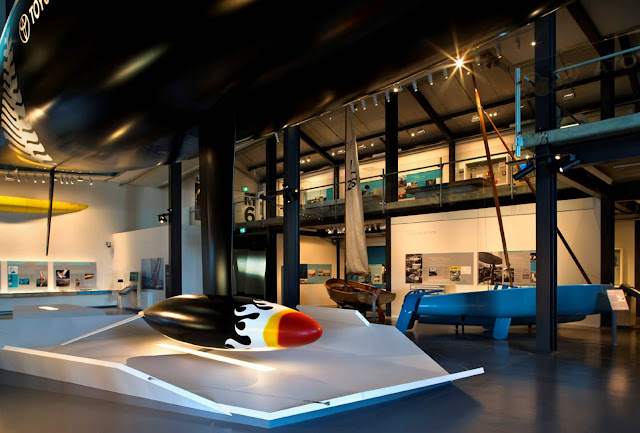 The extension adds a new twist to the museum by virtue of exciting internal spaces, and provides dynamic external facades which announce the presence of its interior purpose. Raw materials rub shoulders with high technology polycarbonate, just as the gritty wharf environment contrasts with the technological extremes embodied in yacht racing, while the great architectural standards of space, light and movement are brought into play to reinforce the belief that architecture is, above all, to be experienced.