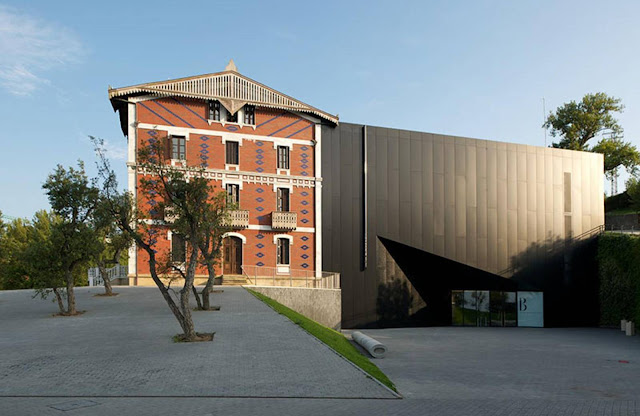 Our involvement with this project came about through winning the open Public Competition for the interior design of the Museo Cristóbal Balenciaga in Guetaria. The scope of the job is in fact significantly broader than previousy announced; it not only involves fitting out a new and finished building, but also involves solving the closures, finishes, interiors and facades which weren’t resolved during the previous architectural stage. 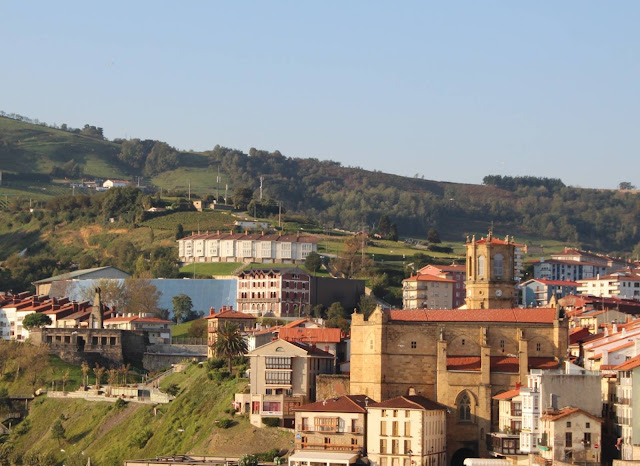 The project planning of the interior design needs to resolve a series of issues normally handled at the architectural planning stage. This means we contribute significantly and incisively to the overall surroundings and image, aiming for the building to gain cohesion and visual unity. One of the most stimulating parts of the project is being able to curate the permanent exhibition of a creative talent of Balenciaga’s stature. It involves creating an interior design project strong enough to reconcile the site, the new building and the museum’s contents. The challenge is that much more significant because the new building we have to work with is practically finished.

It has to interact with both the collection (Balenciaga) and the place (Getaria), even though it is quite indifferent to both because of its size and scale and its form, and its proposed use and circulation and harsh materiality. Given that this is the case, and given the special circumstances which we have aluded to, the project strategy is unique. It is a project which forms a whole from a series of partial solutions. We will try to describe our proposed solutions following an order which in reality isn’t as stated because the project has developed simultaneously from all areas. 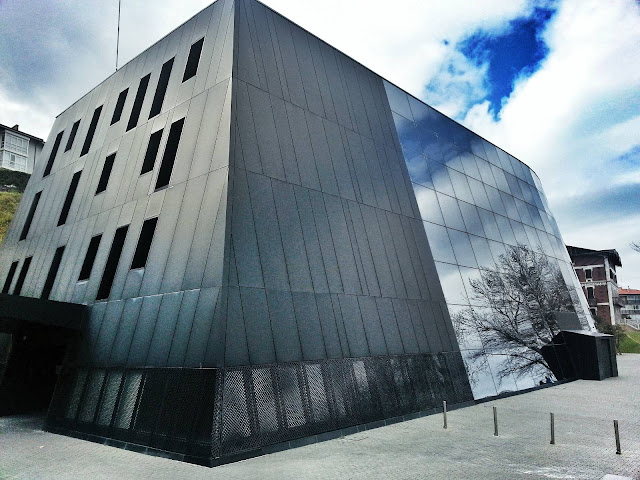 The access and public space:
We deemed it necessary to treat the access space in the same way as the public would treat it. A free and ample space which opens from the end of the escalators and which forms part of the street and the town – the closure is worked so that it can perform this double public-private function. The path around the Aldamar Palace seeks to maintain the land’s contours, without forgetting that there is a landscaping function to be completed which must be coherent with the project’s overall look and feel. 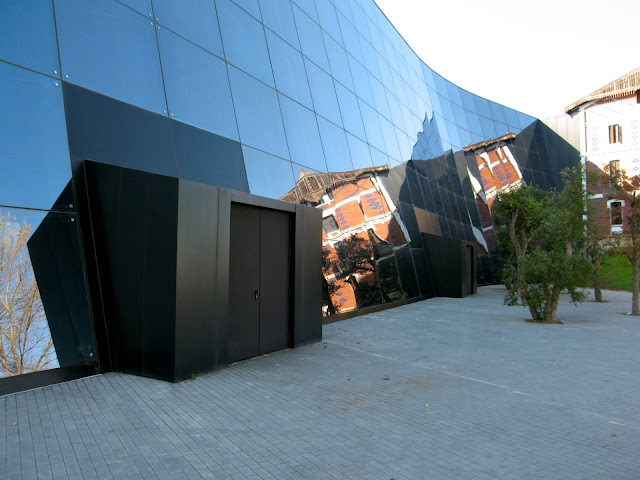 A considerable square is planned at the site of the access to the museum building. A series of leafy vines will be planted along the side retaining wall. The scenic surrounding landscape around the Aldamar Palace is made up of broad slopes. These areas alternate with paved zones and green landscaped slopes. Large trees will be planted on the slope facing the Palace with the idea of visually continuing the wooded space currently on the slope. 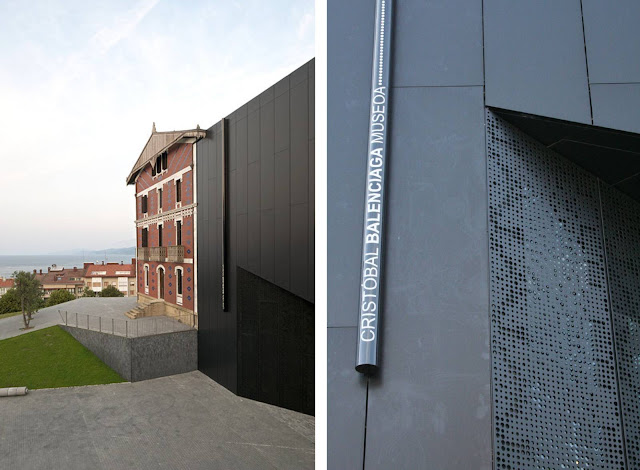 The main facade:
This is a particularly delicate part since it is the most visible from the town and it is the facade which is most closely associated with the Aldamar Palace that defines the identity and character of the new museum. The initial project proposed an entirely glass facade which worked very badly with the more monumental architectural character of the Aldamar Palace. 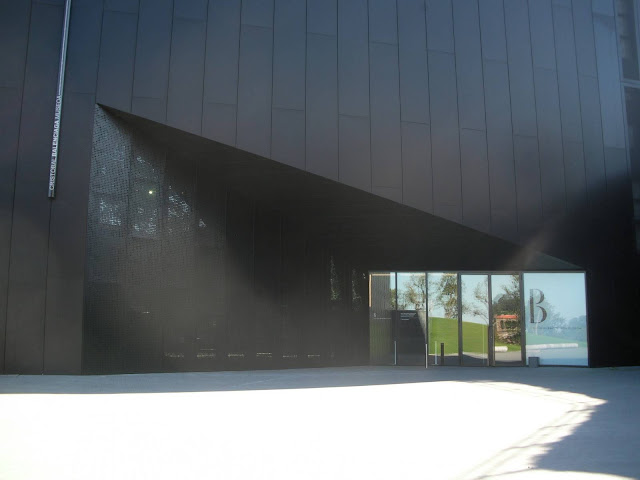 Two ideas which side by side were so completely opposed that they not only didn’t compliment but completely extinguished each other, creating an uncomfortbale relationship bewteen two buildings which from this perspective are practically the same size. Our proposal is to convert the facade into a much more neutral element, so that it virtually becomes a door. Albeit a door with quite a particular character, whose representative role is to appear as a giant fold which gradually allows us into the sophisticated and qualified universe of Balenciaga. 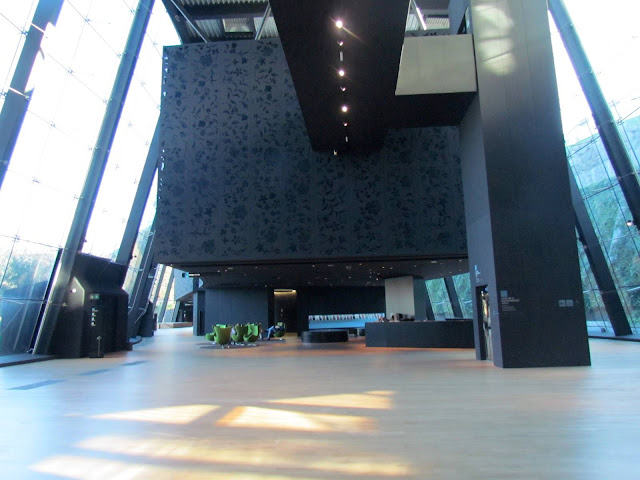 The vestibule:
This is the fundamental space from which all flows around the building start. It is a complex space from its inception, being a forward facing entrance totally orientated to the deepest part of the building, leaving all comers no option but to begin the exhibition route through the Aldamar Palace. The desire to emphasize this second entrance makes us treat the inclining adjoining wall intensely since it marks where our building meets the old. It is like a crevasse which make us feel continuity and beyond, joining the three floors behind this great wall. The placement and shape of the reception furniture also emphasises the necessarily twisted quality of the space. Access to the Aldamar Palace is solved by tilting the entire vestibule floor, to ascend gradually tapering towards the “crevasse” that allows us to enter the Palace. A sort of giant foliaged funnel urges and leads us through the planted path. 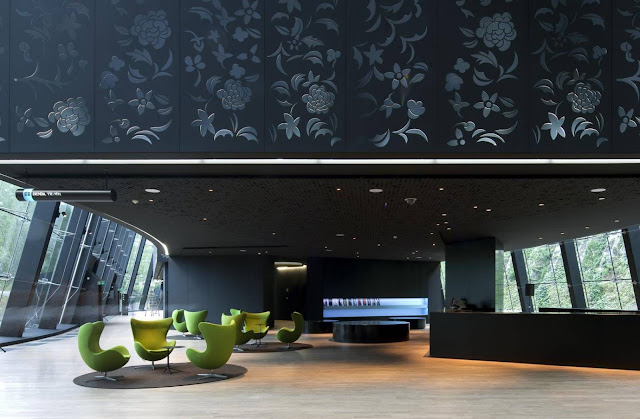 The Atrium:
In the initial project, this large space was left completely empty, but we feel that it demands a more useful purpose. With this in mind we have associated a function with each of the large suspended blocks: a shop, a communal space and the café.