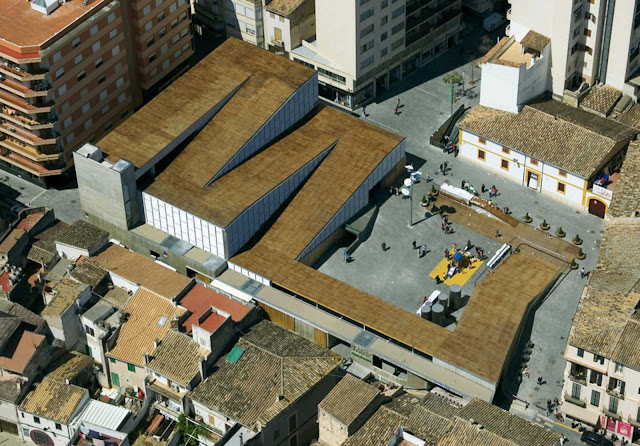 The demolition of the old market building has offered the opportunity to rediscover a new public space in the heart of the city of Inca, just a few metres away from the Main Street and the Town Hall. 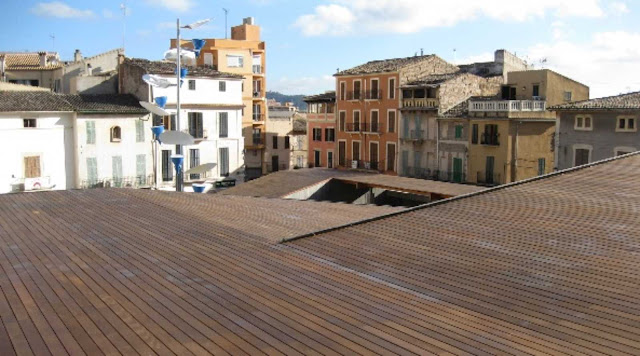 The proposal tries to obtain the maximum possible amount of public space while accommodating the different requirements of a varied programme: car park, supermarket, retail shops, council offices and public market. A public space that aims at supporting the present and future activities of this place. 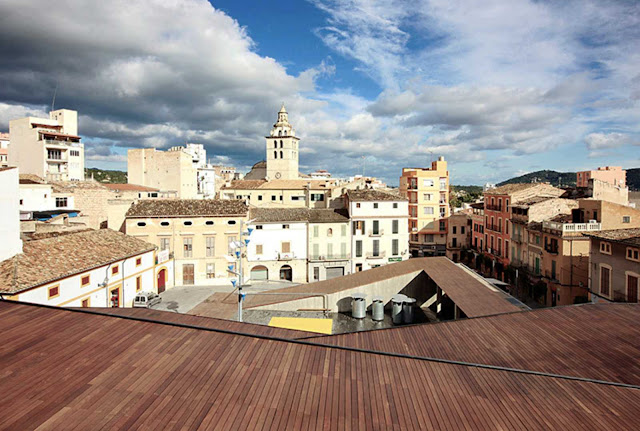 The car park and the supermarket are located underground, while the rest of the required programme rises from the ground reaching its maximum height with the council offices. Beginning at one end of the site, the wooden paving detaches itself from the ground in order to cover the entrance to the car park. 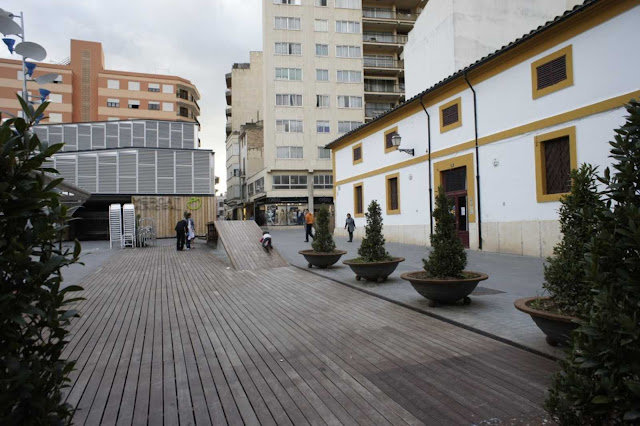 This wooden strip continues as a kind of pergola that runs parallel to the street, wrapping the main public space of the square, before transforming itself once again –unfolding into three sloped planes– to become the roof of the market. A final horizontal stretch covers the building containing the retail spaces and the council offices. 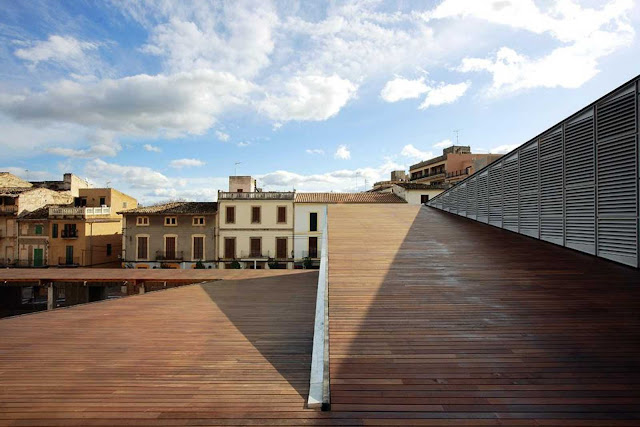 This strip will become the main element of continuity throughout the project and reflects upon the surface the hidden structural bays of the car park beneath. A final horizontal stretch covers the building containing the retail spaces and the council offices. 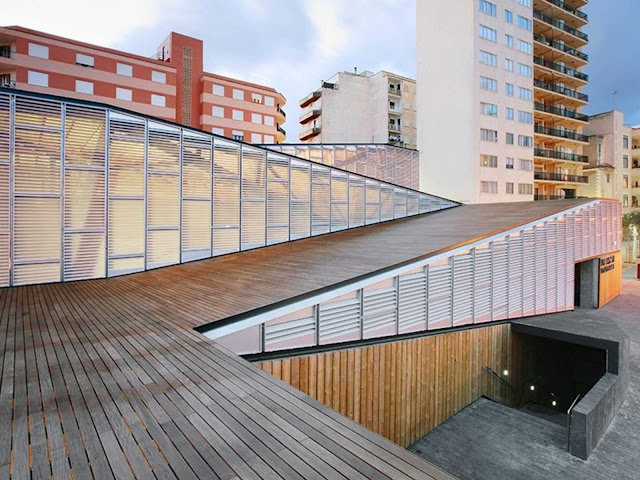 The facades in between the folds of the roof are clad in aluminium louvres to allow for natural light and ventilation of the market within. The trusses were designed under two main constraints that dictated their geometry and dimensions. The team decided that the top chord of one pair of trusses should coincide with the bottom chord of the next pair in the successive unfolding of the roof planes. 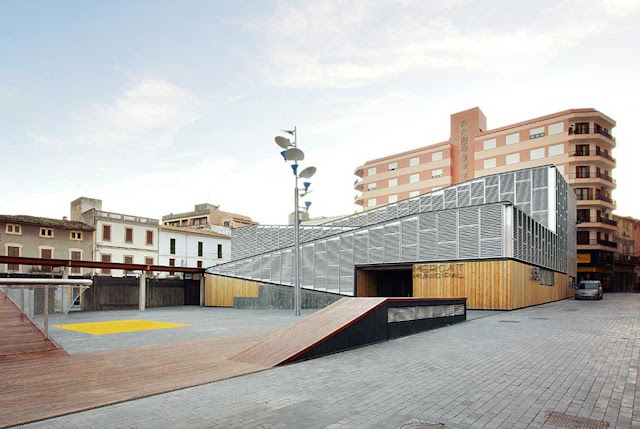 This self-imposed constraint implied a rigorous control of geometry and the constant adjustment of span and rise. Transportation of the trusses — of Norwegian laminated spruce, manufactured in Bordeaux, taken by truck to Barcelona, then by ship to Palma de Mallorca, then again by truck to the city of Inca — also constrained their length to less than 23m. 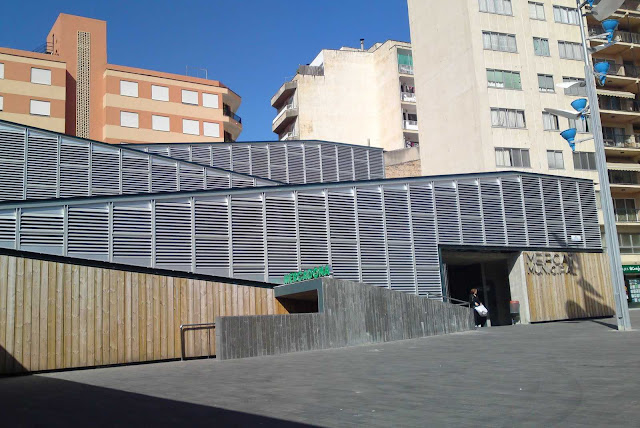 The use of inverted trusses allows the roofscape to be expressed as a continuous plane and stresses the presence of the structure in the market space. 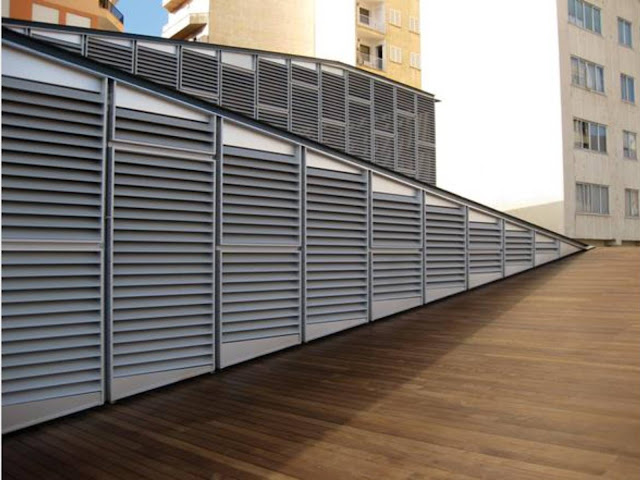 Secondary beams rest directly on top of the chords to support birch plywood boards, on which the ipe decking is fixed to battens.
Tree-like timber structures negotiate the transition between the trusses and concrete columns, reducing their overall span. 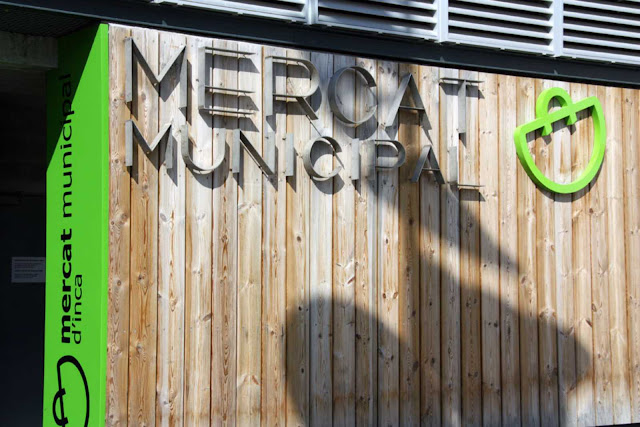 The market is understood as a covered plaza that is continuous with the public space surrounding it. The folds of the market roof allow for the natural light and ventilation desired. 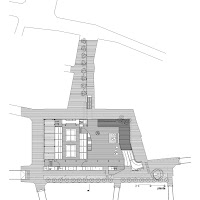 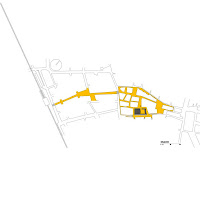