Meanwhile, Diller Scofidio + Renfrotook a more philosophical approach, making much of the idea that a new Penn could be “a city within a city” and combining multiple uses into one multi-layered, porous space that would look like “a large sponge-like mass, aerated from every angle.

“With MSG moved to behind the Farley building on Ninth Avenue, there’s room for a variety of spaces, from a spa to a micro theater to a cascading park. Also imagined are a pool, restaurants, and many surfaces on which to project advertisements. 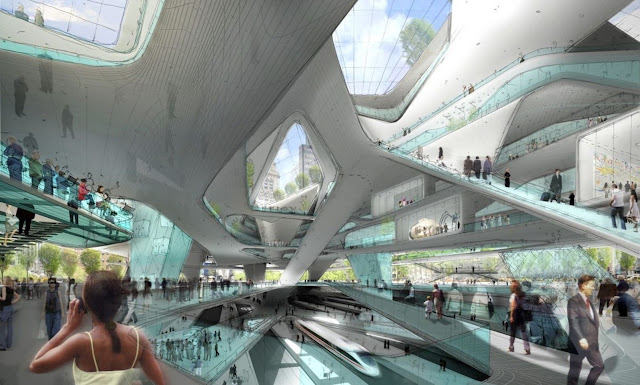 Inside the station, they envision drifting food vendors carrying their wares around their waist (like at a baseball stadium), train arrival and departure times projected onto the floor, and real-time video footage of trains approaching and leaving the station aired onto a large screen.

Meanwhile, seizing upon the multifunctionality of the space, travelers will be able to use their mobile phones to see how much time they have until their train, and just how many activities (shopping, dining, leisure) are within their reach while they are killing time, something the firm called a “time leash” that is part and parcel of “the architecture of waiting.”