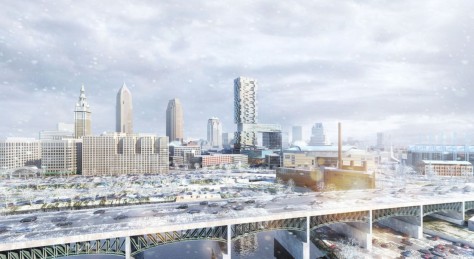 The developers Stark Enterprises of Cleveland and J-Dek Investments Ltd. of Solon behind the skyline-changing nuCLEus project in downtown Cleveland’s Gateway. J-Dek and Stark also confirmed that they’ve hired NBBJ as the lead architect on the project, which now carries an estimated price tag of $380 million to $400 million. 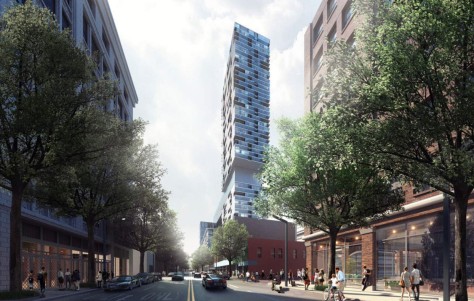 The project is the second high-rise residential plan to crop up in Cleveland during the last year. Out in University Circle, two local developers are talking about an apartment tower at Euclid Avenue and Stearns Road, on the current site of the Children’s Museum of Cleveland. 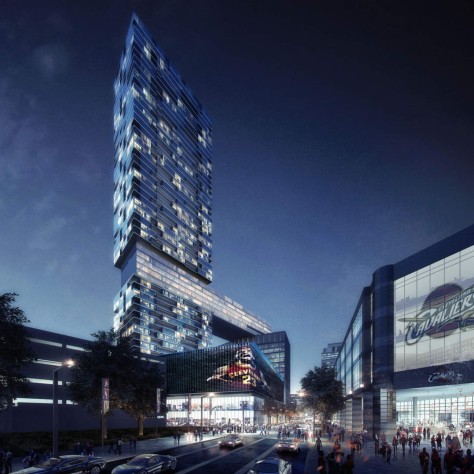 At the southeast corner of East Fourth Street and Prospect Avenue, the building would include street-level retail wrapped around a parking garage. Apartments would line the Prospect side of the garage. 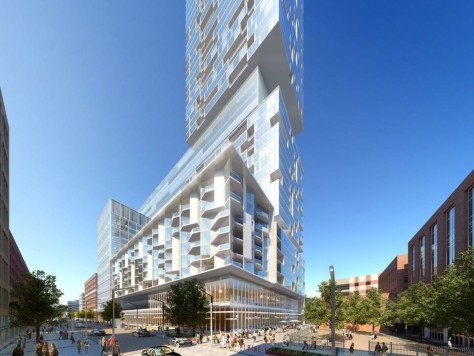 Partway up the tower, a six-story bridge would break up the column of residences. That bridge actually is a hotel, which would link the apartment building to an office building to the east. Above the hotel, the tower would hold more apartments and, at the top, potential condominiums. 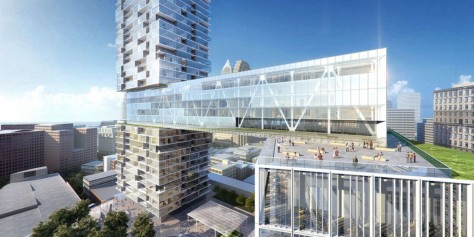 “We wanted to create a design that would be a contemporary landmark, and yet drew parallels to Cleveland’s rich history,” Montero wrote in a response to emailed questions. “The design of the bridge in nuCLEus parallels the iconic bridges that cross the river, while at the same time creates a building that people all across the country and even the world will recognize as ‘only in Cleveland.'” 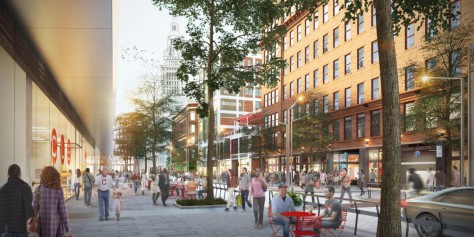 The entire nuCLEus project could include 500 residences, 1,600 parking spaces, 200,000 square feet of offices and 140,000 square feet of retail, plus the hotel. Stark has waxed poetic about the opportunity to create “laneways” — alleys lined with small shops, bars and outdoor dining — as intimate spaces between the development’s tall buildings. 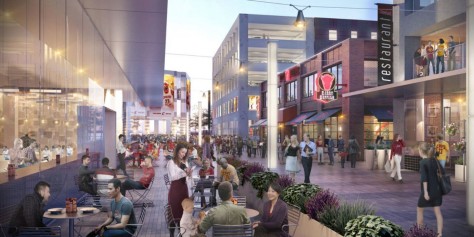 J-Dek and Stark plan to seek schematic design approval for nuCLEus from the Cleveland City Planning Commission next week. The project is slated for discussion at a city design review committee Jan. 15, before the commission’s Jan. 16 meeting. The project clearly will require zoning modifications and other public approvals. Source by Cleveland.com