Design your climate to increase your domesticity
The house combines a particular form of urban planning that is taking place in Vinaroz, and in some places on the coast of Castellón. The city has developed a compact and suitable form of urban planning, based simultaneously on the temporality of the two main local seasons of the year. They are two ways of life in one place. One organised around the urban and the formal, and the other organised in a more informal and hedonist environment.

In the centre, housing towers accumulate and the horizontal city eliminates the diversity of allotments in front of the sea, creating an urban plan without streets and public spaces derived from the intensive use of old roads, now paved for vehicles. In this context the hot season housing of the citizens of Vinaroz or the second homes of visitors from the interior, present a city with two different habitable infrastructures.

The seasonless house disassociates itself from this way of living to consider its own environment, domestic, adaptable and resilient for all seasons of the year turning, it into a device that creates a personal climate, individual to each inhabitant. A house without exterior, as everything external is able to take place inside.

Increased Domesticity
This is enlarged by taking it not only to the design of a personal climate though the different elemental systems of appropriation of air, light or radiation extensions; but also to the domestic, public, and intimate habits of the house in relation to all the agents that occupy it on a temporal basis with greater or lesser intensity.

The de-locating of the client’s domesticity, which is spread across his practices: flights, cities, work, itinerary intimacies, doesn’t permit the construction of a close and accessible day to day domesticity. The house, as a crossing point, builds an augmented domesticity. It is because of this, that the Seasonless house is not inhabited. Its practices are inhabited and not the house, which remains as a device in continuity with the global habits of its inhabitant and the possibility of reproducing other climates that can contradict the ones that already exist in Vinaroz.

In this system, the house builds a large playground from the strong slope of the land, a place from which to observe and include the house landscape, without being clearly observed form the street. It is in this playground where a more indeterminate and polifunctional way to live with the landscape is provided. Activities do not have a specific location in which to develop but rather, according to the local aspects, views, climate and privacy, they enable the project to develop as a landscape of variable domestic events that respond to desire, need or optimisation.

It is in this place where the “far away table” or the “squid searching lamps” are designed as large-scale devices for interactions with the playground. The top floor on two different heights covers the playground connecting it with the most private activities. Reality surpasses both in one continuous and limitless environment. Eating happens upstairs and sleeping on the sofa. Reading takes place in the backyard and one can shower at the front of the building.

A Mediterranean Global Construction
What is ‘globality’ if not a house of undulating tiles and plastic? Thousands of people live under this fundamental umbrella. But this system can be very informal or more sophisticated and efficient. The seasonless house is also a house without a place, a Mediterranean styled device. White, efficient for climate and solar radiation reasons is also efficient as a singular element of the roaming nature of its inhabitant.

Its execution: a standardised and modulated construction system, personalised for specific needs in this house. Built from the inside out, with double walls made from cellular polycarbonate, simple filters of undulated polycarbonate, interlocked metallic tiles, different glasses according to the contiguity of the climate on either of its sides. The agro-textiles dissipate or accumulate the radiation. An open and closed house at the same time.

That transpires where it appears closed and is hermetic where it appears open. The house has a ‘waiting structure’ in preparation for when the client attains a greater level of energy efficiency. The climate conforms to spontaneous space. In cities, in public spaces, and also in houses. We are all architects of the interior of our symbolic, sonorous and spacious receptacles, and the house is a back curtain  to be developed. Seasonless house is naked, almost a virgin; the project has just begun…. Source by Casos de Casas. 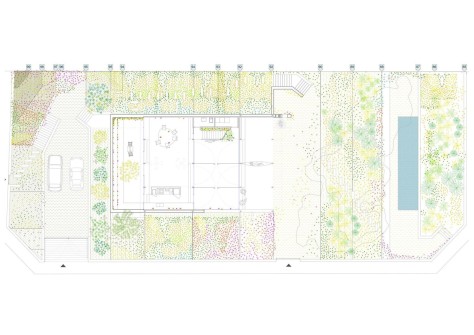 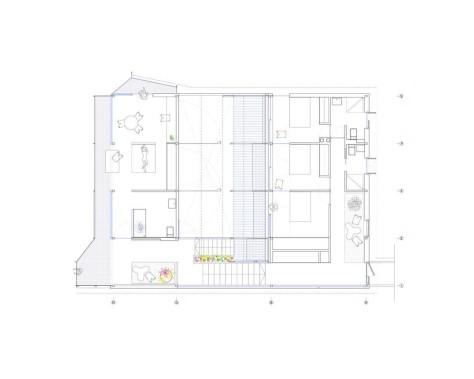 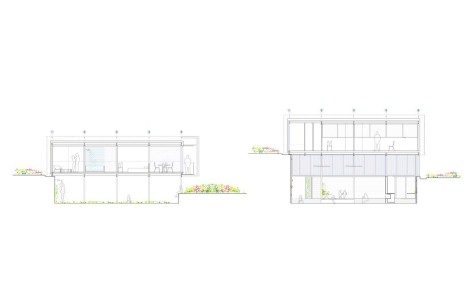 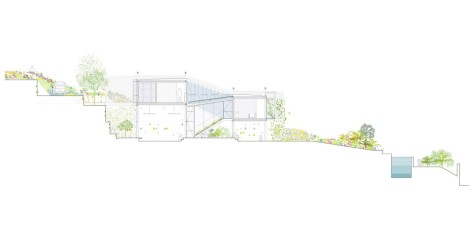