MVRDV spent two years developing the research masterplan for Caen Presqu’ile, a 600 hectare area stretching from the centre of the historic city of Caen, along a long peninsula formerly occupied by heavy industry, and over the borders of two other neighbouring towns, Hérouville Saint-Clair and Mondeville.

The peninsula sits between the Orne river and the canal leading to the sea, and was left heavily polluted after deindustrialization in the 1970s and 80s. The project is highly unusual in its scope, ambition, and context: the fact that it stretches nearly to the walls of the historic castle at Caen’s heart; the three cities united in their desire to regenerate the vast area, and vision for a comprehensive development plan to create a new area of the city grounded in precise interventions.

Phase 1
The first phase of the project involved defining its goals by developing a methodology to approach the extensive site. MVRDV divided the work into research, and eventually designs, on the following topics:

• mobility networks, including soft transport, hard transport infrastructure and parking;
• the (existing) landscape, and whether to cultivate and control through planting and shaping, or to rely on natural dynamics and growth;
• the area’s industrial heritage and existing buildings, which could be retained, reinvested, or reinvented as poetic traces in the urban environment.

This methodology lead to the development of a specific spatial planning tool, ‘the offset’. The offset creates a secondary street network and shared public space around buildings and public spaces. It acts as a mediator between existing buildings and landscapes and new insertions. The offset provides a process for examining and planning areas of development, due to its detailed, flexible, yet uniform spatial character.

The offset takes the form of an urban version of the ‘bocage’, the historic hedgerows of Normandy, and an important element in the heritage of the surrounding landscape. The offset is planted in a way which preserves this natural heritage, while also providing a powerful tool for spatial intervention for defining buildable plots and ‘staging’, historically, scenographically, and poetically, the industrial heritage of the site.

Phase 2
The first step of the second phase was conducting more in-depth research into the many different areas of the site, and selecting three specific areas for further research and eventual intervention. These areas were assessed in relation to the city’s visions for programming, density, and architectural articulation.

The offset tool was developed further, both conceptually as a universal model for the entire project, and with specific variations in plant sizes, dimensions, and materials. The offset was developed further for three different areas in the site, each with their own guidelines reflecting the specific qualities, character and history of the area.

Phase 3
The third and final step in the masterplanning process was to further develop the three test areas, going beyond the definition of the offset tool for each, and working into the detailed design of specific public spaces in each. In addition to these symbolically important shared amenities, detailed road, transport, and parking planning was developed, along with lighting plans, waste management systems, and definitions of public and private bounderies.

For each area, numerous images were created as inspiration for future architects and urban planners; detailed recommendations on building typologies and materials, such as the introduction of Dutch-style intermediary housing allowing three floors of dwelling to share ground floor access. The offset tool was also further developed for each area in this phase, with sets of paving and planting details, and a variety of possible customizations relating to its context. Source by MVRDV. 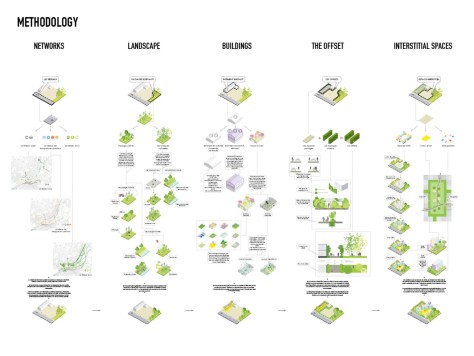