A blue-green delta landscape, like rivers flowing between housing islands full of character, and a Loop for social activity, are the main elements of a proposal for a master plan for Amager Fælled Kvarter (Amager Commons Quarter) that puts everyday life, nature and social fellowships at the centre, setting the stage for the Commons’ unique nature as a shared recreational resource and the social grouting which interconnects the urban quarter’s sustainable city life.

Community, activity and urban life in the middle of nature. C.F. Møller’s proposal for a new master plan for Amager Fælled Kvarter will preserve the special nature resources and recreational function of the area. The Metro just around the corner will be the basis for a new urban space where Copenhageners can meet and live. A key aspect of C.F. Møller’s proposal has been to maintain Amager Fælled’s unique nature resources and special characteristics, to make the area an attractive residential and urban quarter by maintaining everything for which Amager Fælled is appreciated today.

Five island quarters will be created which each contributes its own identity-creating characteristics, based on qualities at the location. Each quarter will give access to the Commons’ extensive natural assets and new urban communities. The five housing islands will be combined with each other and the Commons by the pedestrian and cycling Loop, which will also feature joint functions, activities and social meeting places. The Loop will thus create a physical and social infrastructure connecting Amager Fælled Kvarter with Ørestad and Copenhagen.

Five unique quarters
The housing islands at Amager Fælled Kvarter will be individually matched to their respective locations. The Station Quarter is the master plan’s most urban quarter and together with the Byhøj Quarter is Amager Fælled Kvarter’s urban face towards the Metro, Ørestad and Copenhagen. This is where grocery stores, cafés, businesses, associations and other functions for the general public will be gathered, on the ground floor and centred on a series of down-scaled urban spaces free of car traffic.

Here, the community building, together with the shared urban square, will be the natural gathering point for major events for both residents and visitors. Opposite the Station Quarter will be the Byhøj Quarter as an alternative activity venue. A cluster of institutions such as a youth centre, nursery school and health centre – together with an activated ground floor in the area’s car park – will be the setting for an activity area which invites the rest of the world inside.

The Copses Quarter’s special characteristics will stem from the existing dense vegetation to the south. The forest will create continuity and serve as the transition zone between the various urban spaces which appear in the clearing. The fifth quarter is the Marshes Quarter. This is where the urban dimension and the Commons are fully integrated. Like a projected bastion, the urban quarter plays on both the precise and the more fluid meeting with the surrounding commons area. This creates a unique sense of living directly on Amager Commons.

Nature both safeguarded and safeguarding
Amager Fælled Kvarter’s open countryside will serve as a continuous green space between the housing islands in the master plan. The countryside will also be where most of the area’s rainwater – from roofs and non-trafficked areas – can be collected and managed before being channelled onwards. This will apply on an everyday basis, and also in the event of torrential downpours.

The built-up area will thus be protected from flooding, and it will also be possible to channel clean rainwater to existing wet areas, helping to safeguard the commons’ flora and fauna and ensure life in the area throughout the year. During ordinary precipitation only the lowest-lying channels and areas will be flooded, while larger amounts of rainwater will flood a greater part of the area. 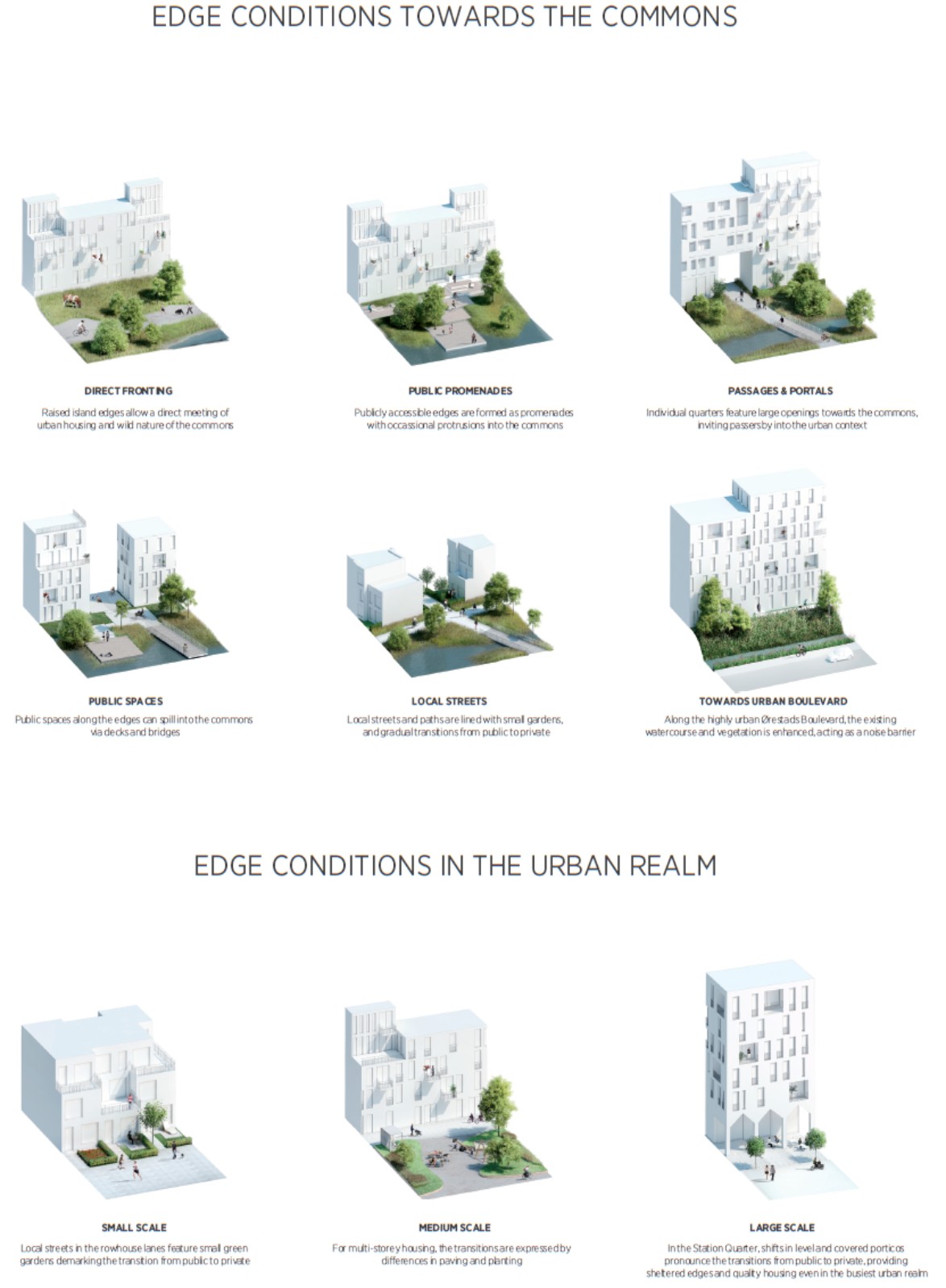 At some times the area will be green, fertile and expansive, while at others it will have streams and lakes. This will ensure diversity and invite new forms of recreation and activity.C.F. Møller’s proposal for Amager Fælled Kvarter thereby maintains the Commons as a shared nature resource, safeguarding its accessibility to residents, Copenhageners and other visitors in general. Source by C.F. Møller Architects.