Willamette Falls is the second largest waterfall by volume in the United States. For over a century, the breathtaking site has been cut off from public access by industrial infrastructure built along the water’s edge.

Snøhetta is leading the design of the public spaces that will allow visitors to rediscover the full height of the falls and its rugged shoreline, uncovering swaths of the 22-acre site’s historic basalt topography and reconnecting Oregon City to its spectacular waterfront.

The design is the culmination of a complex two-year design process, underpinned by a significant public engagement effort that has reached thousands of unique participants. The riverwalk will serve as a portal to the Northwest’s collective history, reviving a former industrial site through its aggregated layers of natural, ecological, cultural, and geological history.

Beginning at the entrance to Oregon City’s historic downtown and ending at the crest of the falls themselves, the riverwalk is conceived as sequence of islands, an archipelago carved from ancient basalt and industrial steel, concrete, and wood alike.

The new design treats the whole site as a single landscape, with a network of promenades and lofted pathways that lace through the physical strata of the site, immersing visitors in a tactile experience that celebrates the changing water level, the feeling of the spray on your skin, the dramatic play of light and the roar and presence of the falls.

Home to endangered species, diverse flora and fauna, Willamette Falls’ sensitive and powerful envionment required the design team to calibrate a host of considerations. Over the course of a year, the river levels typically experience a flucuation of approximately 25 feet. Expert hydrologists studied the effects of extreme flooding on the new design to help formulate a strategy to mitigate the potential extent offlooding.

Thus, the public spaces and adaptively re-used structures of the project are designed to withstand and accomodate regular flooding and extreme flood events. Further, the riverwalk sequence will be reinforced to withstand seismic activity within its location in a seismic zone.

Through sensitive site editing, the design will provide public access and interpretation of a unique crop of nationally important historic structures that charted the industrial history of the Pacific Northwest.

Simultaneously, the selective removal of industrial structure will restore healthy animal and plant habitats within the retained structures and on the basalt bedrock of the site, establishing an ecological vitality unique to the site and in service to endangered wildlife species. New public gathering space will anchor the site as a civic heart of downtown, offering key opportunities for events and redevelopment that will drive economic renewal.

The design will also provide greater access to the five confederated tribes who will continue to annually fish the waters as they have done since time immemorial. Collectively, the riverwalk sequence opens a new chapter in the life of the site, one that reimagines Willamette Falls in its fullest, most expansive depth in nature, culture, and time. Source by Snøhetta. 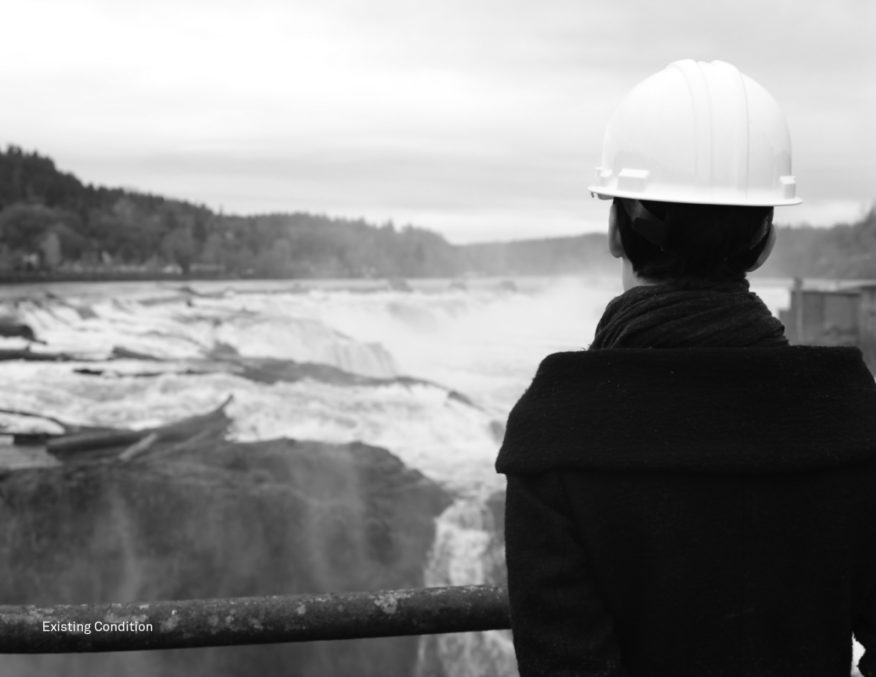