Australia is set to welcome its tallest building to date, Green Spine, a stunning cantilevered structure composed of two towers, both with a twisting geometric glass façade and terracing. Green Spine by  UNStudio and Cox Architecture has been announced as the long-awaited winning design for the $2 billion plus Southbank site to be developed by Beulah International.

Conceived as a conceptual extension of the Southbank Boulevard, the Green Spine will be home to a vertical city of green spaces with a strong focus on culture, paying homage to Melbourne’s diverse population. Reaching 356.20m high, the residential tower will be crowned by the Future Botanic Garden, a stunning publicly accessible garden in the sky.

Competing against six other groundbreaking designs, Beulah International Executive Director Adelene Teh said Green Spine showed work by a strong, multidisciplinary collaborative team that is a bold, yet thoroughly considered approach to creating a context driven landmark as an addition to Melbourne’s skyline.

Providing a pedestrian connection at street level through a series of stairs and stepped terraces, the precinct is extended vertically, offering open platforms, a marketplace, meeting places and art installations in a world-class entertainment facility. The lower levels of the towers will also make space for a vertical school, daycare, library, cinema, auditorium and an Australian-first BMW experience centre.

From thereon, the spine twists into a series of outdoor spaces and green devices along the façades of the two towers, culminating at the top of the residential tower. Opposite will sit a smaller tower, at 252.20m high, that is set to house commercial offices, a hotel, specialty restaurants and bars.

On the win, co-founder of Dutch architecture firm UNStudio Caroline Bos, said “all we can say now is a big thank you for the trust placed in us and we will do our utmost to contribute to a healthier and future-proof Southbank and wider Melbourne with our Green Spine.” 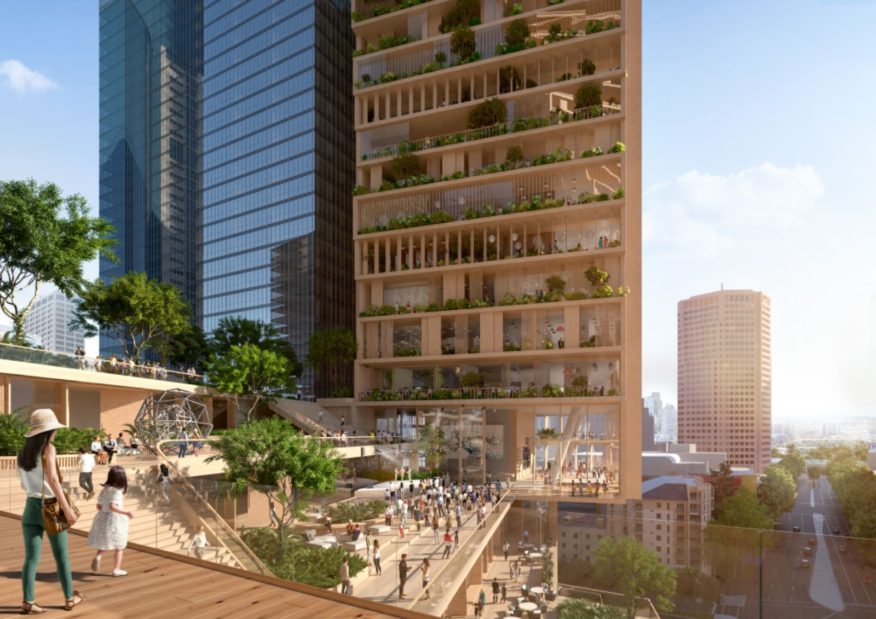 Image © UNStudio and Cox Architecture“We are truly delighted that our design has been selected as the winning proposal for this very exciting project! We worked with a fantastic team of cultural placemakers, sustainability consultants, landscape designers, artists and engineers to achieve a fully integrated design,” said van Berkel.