Klaksvik is the second largest town in the Faroe Islands. The town center has an amazing location by the sea. Through this urban design competition, Klaksvík. Municipality wants to make the town the ideal location for industry, retail trade, and cultural events – as well as residential. The main site of the competition is a landfill on the bay,—an underused area (see above).

Klaksvík’s new city centre will be established where the two inlets meet. The urban development plan incorporates and strengthens the existing qualities of the city. It creates an adventurous and vibrant city centre with a sheltered city square that will provide the framework for cultural activities and numerous other opportunities. The city square forms a natural connection to the sea and will be the heart of the city.

Klaksvík is the second-largest city in the Faroe Islands and is situated in the island of Borðoy, the largest of the northern islands. Klaksvík spans over two opposite mountain ridges, connected by a low-lying area where two inlets meet. The location of the city makes it particularly exposed to the wind. Thus, comfort and microclimate are important factors in the development of the city.

Displaced building volumes break the dominant south-east and north-west winds in Klaksvík and contribute to providing new comfortable shelter zones in the city. The new urban space is based on a star-shaped structure where the centre of the star constitutes the new sheltered city square. The pointed shape ensures that the new urban space is rooted in the existing city.

Conversely, it also brings the surrounding city space, green areas, canals and beach spaces into the new square.Klaksvík City Centre consists of a continuous system of paths that connects the three districts built around different themes: a green, recreational area; an urban development with a central, unifying city square and shops, cafes, a library, public offices, residences etc.; a maritime district with a cultural house, a maritime museum, cafes, shops, residences etc. along the new promenade. 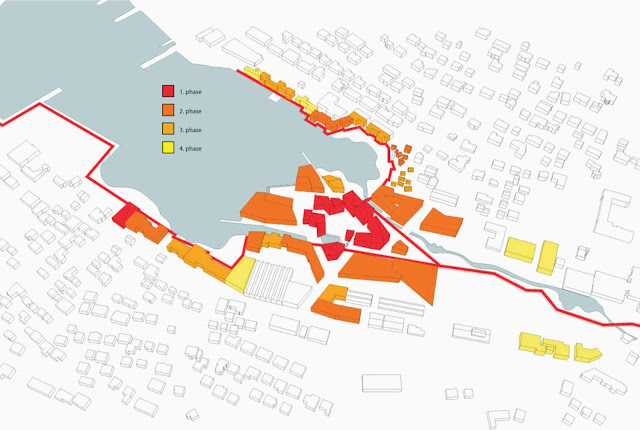 The proposal for the new city centre in Klaksvík, the Faroe Islands, is based on simulations of local wind conditions. The project team has worked with broken, displaced volumes and streets to ensure a calm and comfortable microclimate.Wind comfort depends on a number of elements, the natural weather conditions of the area and the specific buildings and urban spaces. 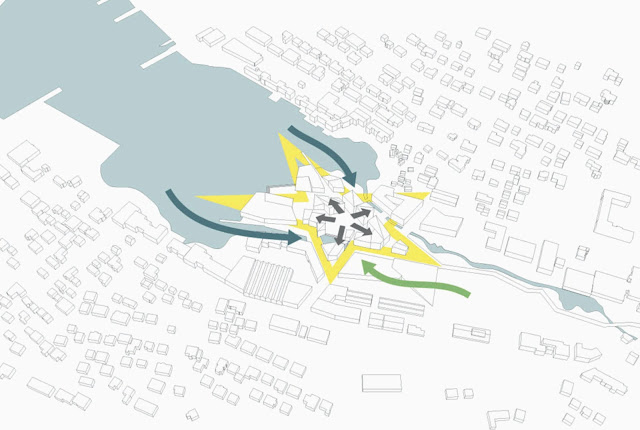 Data from accessible local measurements, local experience and knowledge have been incorporated in the project. Klaksvík is situated in an area where two inlets meet, only separated by a low-lying area that brings together the city. The city is situated on two opposite mountain ridges where the rainy, southern winds occur more often than the cold, northern winds. 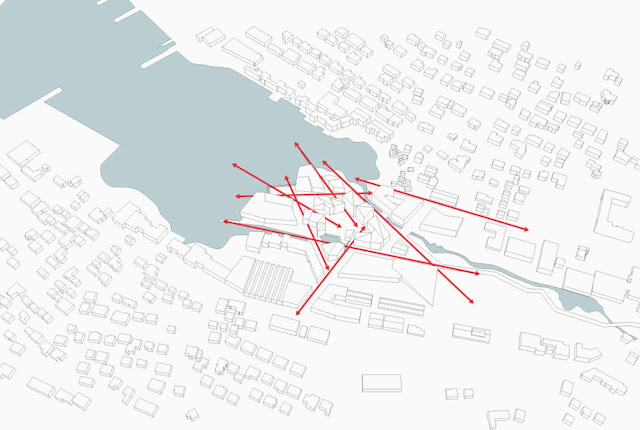 Due to the two mountain ridges situated opposite each other from the south-east towards the north-west, the centre of Klaksvík is particularly exposed to winds from these two directions.

The perception of comfort and wind environment is subjective and cannot be quantified unambiguously. The displaced building volumes break the dominant winds and create comfortable shelter zones in the city. With more detailed, local measurements, it is possible to adjust the volumes and thus climatically optimise the building stock. Desciption of Hanning Larsen architects.