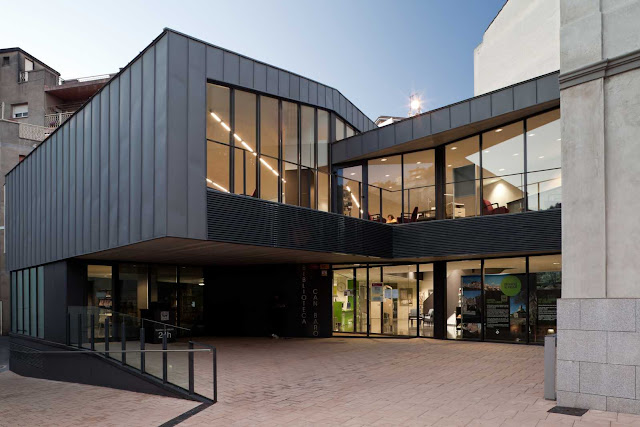 The geometric complexity of the architectural formalisation of this project for a municipal library takes up a clear position in terms of urban sensibility, in a search for a maximum of interaction between the building and the public space. 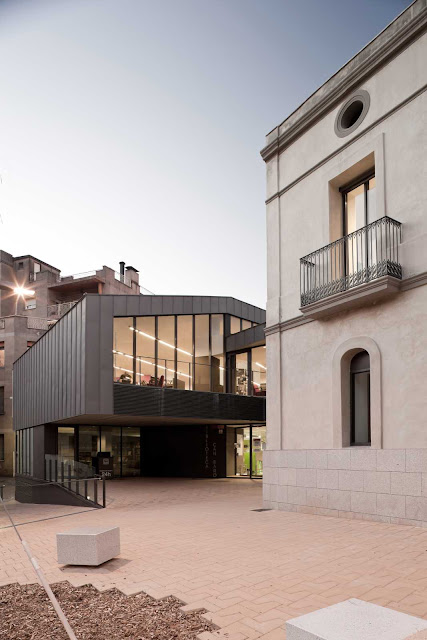 The place that was set to accommodate the extension and the whole environs of Can Baró conserved, before the intervention, the charm of an area in which diversity and a certain lack of structure made a forceful, logical and meditated response necessary. 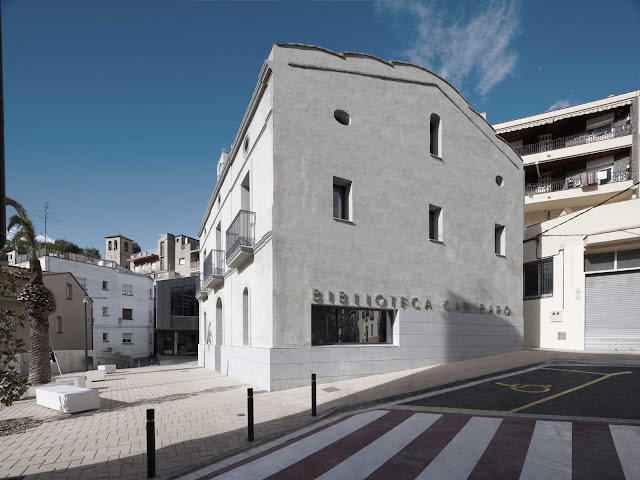 The expansion thus emerged from the topography, as a continuity of it, seeking a fusion between the building and the public space, in such a way that the public space is not treated as something that appears between buildings but is integrated into the architecture itself, and the architectural space is something that can be found hidden or camouflaged within the topography. 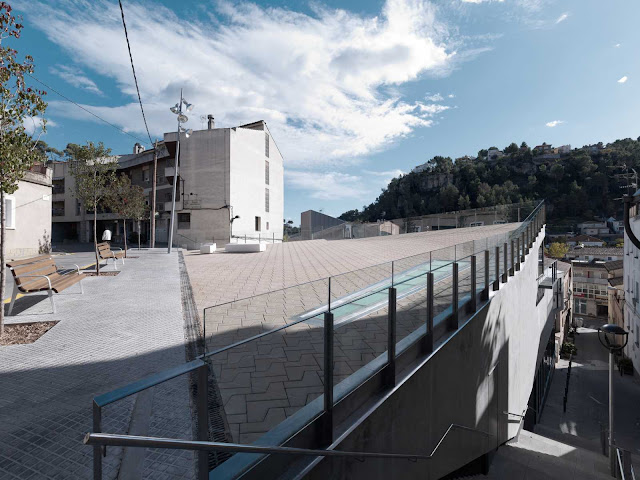 The building responds to the surrounding environment, with a set of starting conditioning factors: the existing building and a great irregular void of complex geometry and with considerable topographical unevenness. 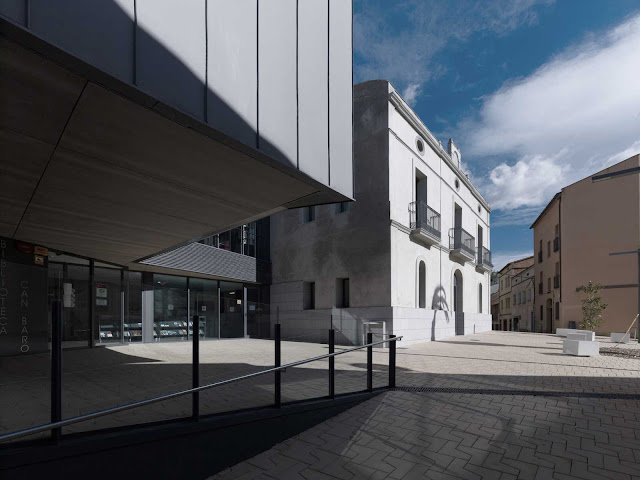 The new building, in its apparent formal complexity, can be defined as a piece made to the measure of the place, built or modelled with that which cannot be touched but instead perceived: light-shadow, empty-full, open-closed, warm-cold… The reform of Can Baró has been tackled in an integral manner, only conserving the façade enclosures. 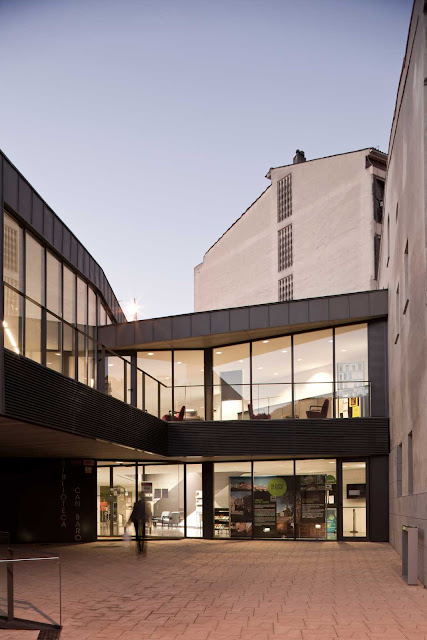 By taking advantage of the powerful unevenness, the library shows itself as a continuity of the topography of the place; part of the roof is transformed into a horizontal carpet as an extension of the pavement space of the upper street, which is constituted into a public square. 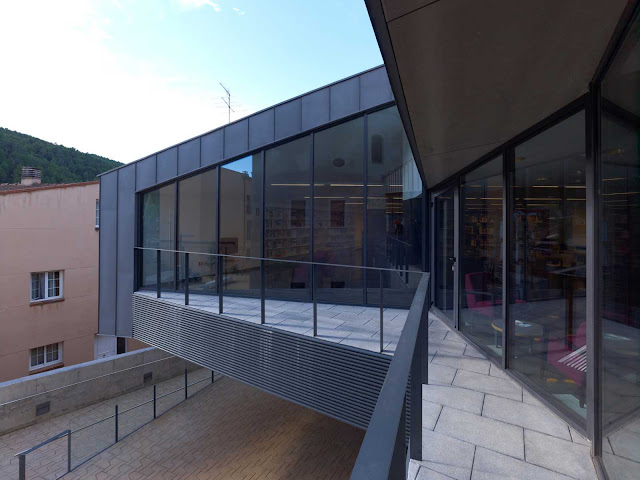 This square, which climbs the slope in a search for the best vistas, culminates at the highest point in an exceptional vantage point. From this point on, the building is not understood as a building but as the actual terrain that descends and is modelled to end up transformed into a space that houses the library programme. 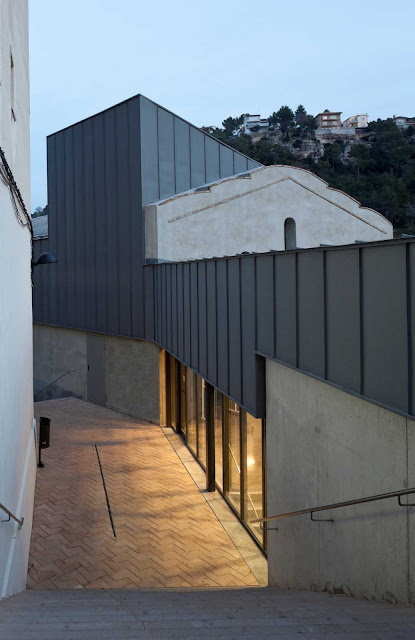 The roofs begin to break up, turning into the topography that descends in a search for dialogue and relations with the neighbouring constructions. The play of roofs that rise, descend or break up is the mechanism that simultaneously allows the interior spaces to gain height and at the same time to filter and capture the natural light to illuminate the interior spaces. 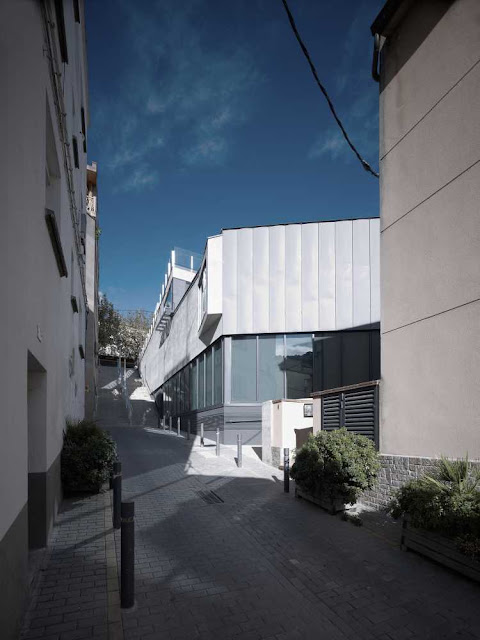 Inside, the double spaces end up taking light to the spaces nearest the bottom. As for the skin, for the ground floor a glazed enclosure has been chosen in order to give transparency to and announce what takes place inside, like in a show window. Further up the spaces only open up in very specific and controlled points, selectively seeking out the best views, permitting more secluded spaces that are suitable for reading, preserving both its own privacy and that of the surrounding buildings. 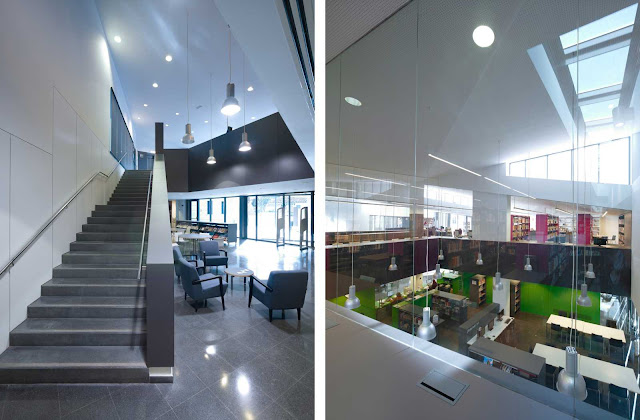 Inside everything is articulated into sequences and spaces that change constantly in a simultaneous play of open-plan spaces, double spaces, highly controlled vistas and multiple inlets of light through the roof lights. 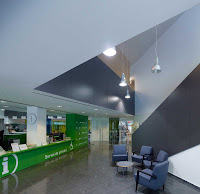 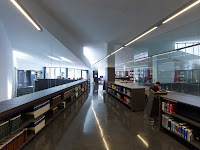