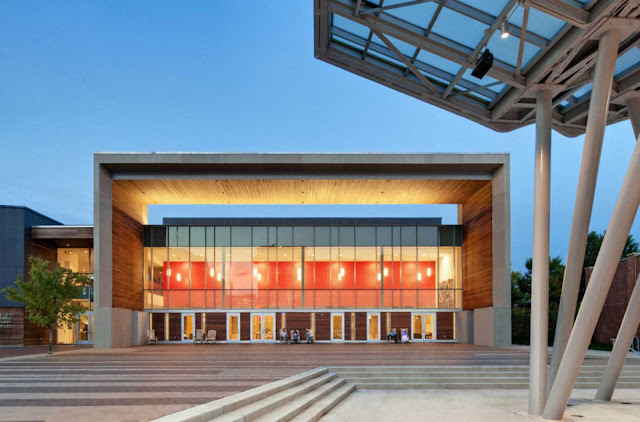 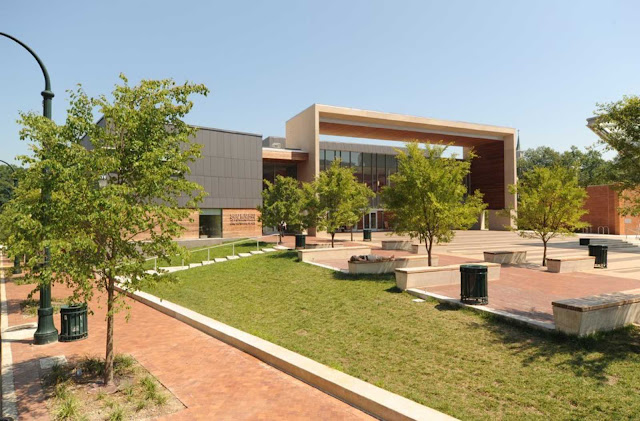 The entry to the Civic Building is directly aligned with the south sidewalk of Ellsworth Drive, with a pedestrian spur continuing the straight line of the sidewalk across the plaza, to the building’s front door. 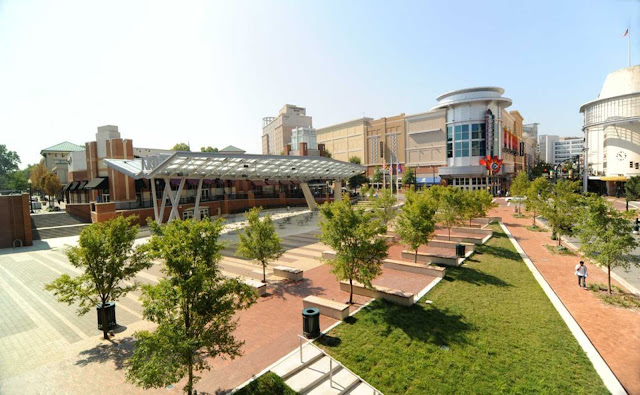 The entry walkway continues northwards from there through the building, as the building’s main internal circulation route, ending at a secondary entry vestibule at the new roadway called Veterans’ Place. 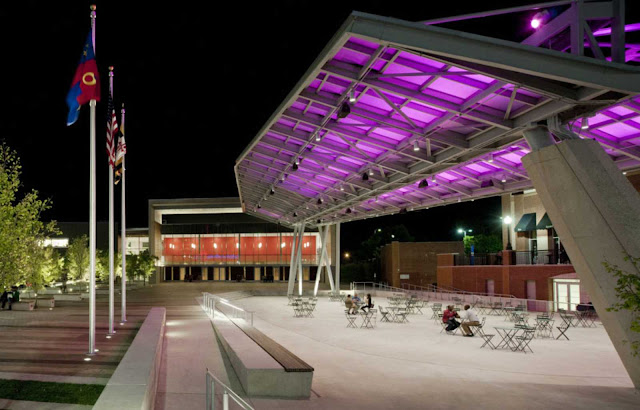 This second entry to the building was seen as being the less formal connection to the residential neighborhood to the north, allowing for everyday use for those wishing to access the building from the neighborhood, or gain easy access from curbside drop-off. 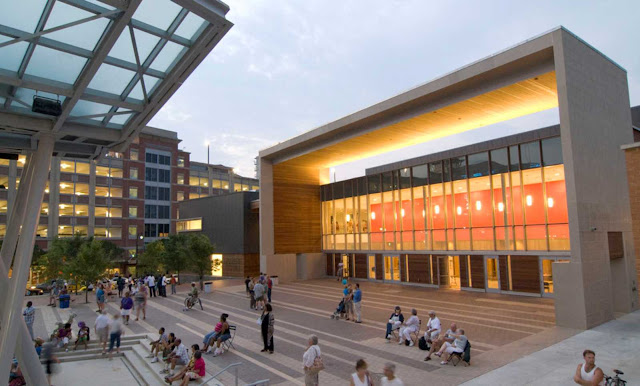 In this way, the Civic Building occupies, and creates, a zone that moderates between the residential neighborhood to the north, and the commercial and retail downtown to the south. Alongside the entry spine to the east lies the major composition of public spaces, arranged sequentially, so as to create a direct visual and civic relationship between the Great Hall, Prefunction Space, Portico, and Plaza. 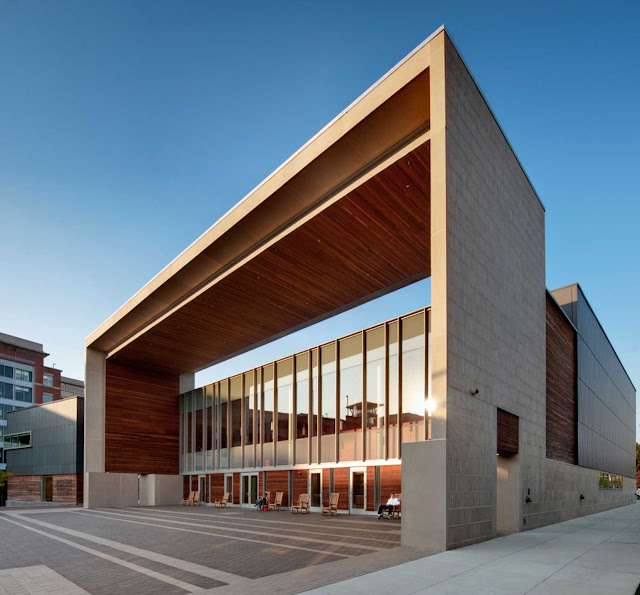 These spaces are arranged along a common axis, and are directly related to one another through similarity of width. Doors from the Great Hall lead directly into the double-height Pre-function Space, which is, in turn, directly accessible to, and visible from, the Plaza. The Portico acts as an urban-scale proscenium, and is intended to functionally serve as a covered area for performers during the largest events. 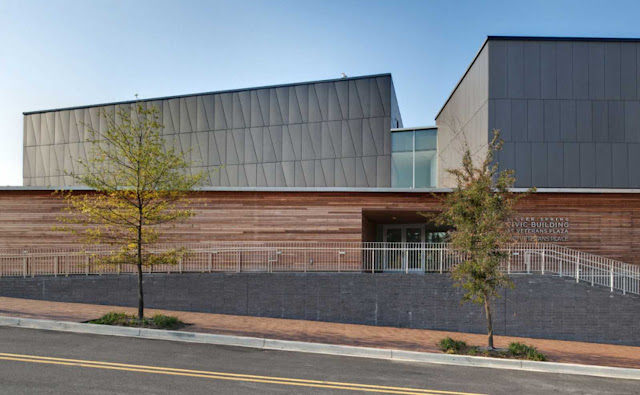 In this way, the major outdoor public space in front of the Civic Building continues into the interior, and vice versa, with all large-volume interior public spaces being directly accessible from the building’s main entry or from the Plaza. 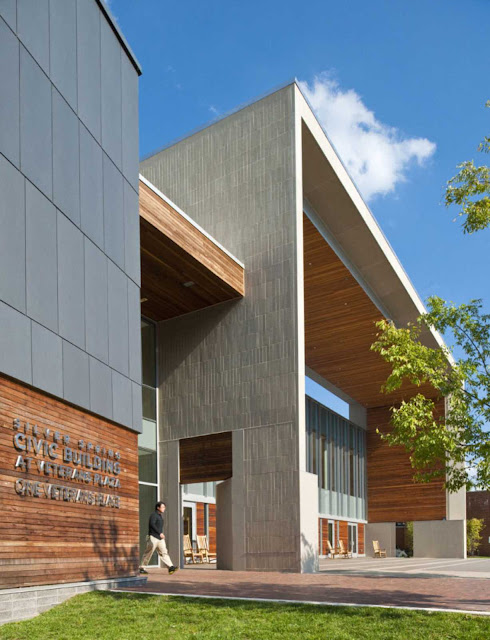 An administrative and community wing is located to the west of the circulation spine, housing the SSRC office suite and several community classrooms on Plaza and Upper Levels, with the Round House Theater’s offices and classroom on the lowest level. 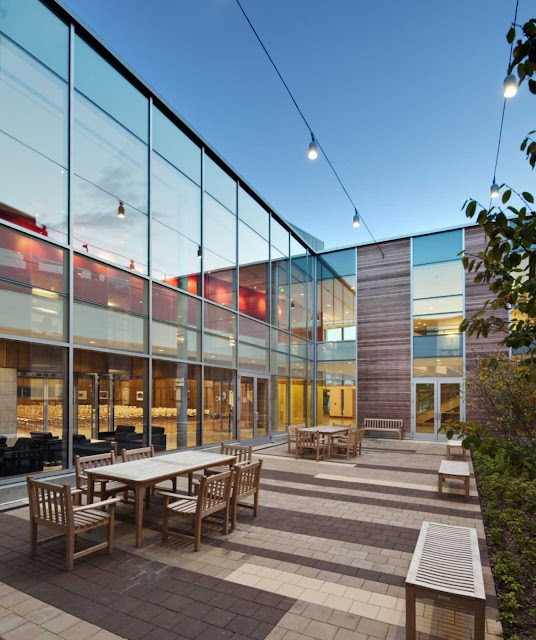 Given that the Civic Building is a somewhat unusual hybrid, housing public administrative functions for an unincorporated town alongside community program, as well as a local non-profit group, MSA’s intention was to create substantial internal relationships between the program elements so as to create a building that would feel internally connected and welcoming to the public. 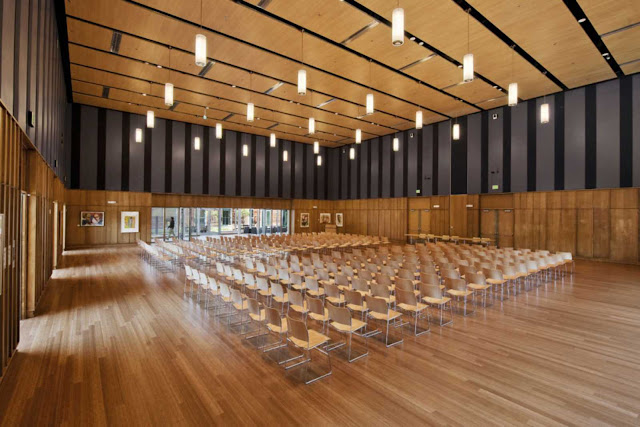 To achieve this, numerous physical and visual connections of different levels and program functions were introduced, in the form of overlook balconies, glazed walls at community classrooms, a large feature stair, the courtyard, and double volume spaces.