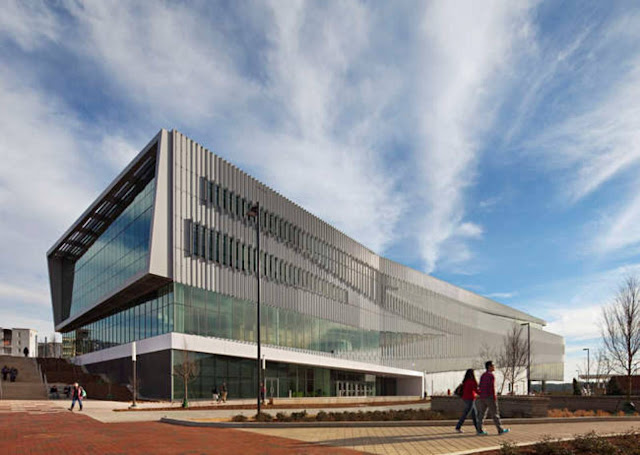 Snøhetta recently completed the James B. Hunt Jr. Library on North Carolina State University’s Raleigh campus. The Hunt library serves as a centerpiece for NC State University’s Centennial Campus, which the school has used for expansions since the 1970s to avoid disturbing the quads of its traditional neo-Georgian brick old campus. 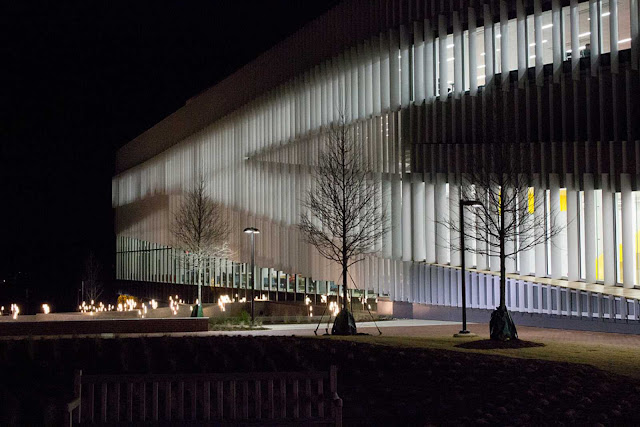 The James B. Hunt Jr. Library builds on all we have learned to create an iconic building that captures the spirit of NC State University’s strengths in science, engineering, technology, and textiles. 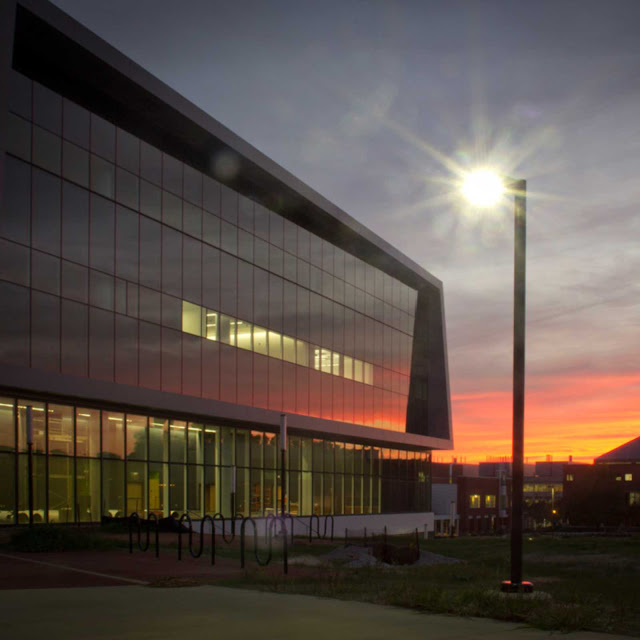 Directed by a supercomputer in the bowels of the building, the bookBot barcodes the volumes, sorts them by size, and stores them in more than 18,000 bins. The first floor of the building features Robot Alley, where visitors can watch the bookBot through a glass wall as it speeds through huge storage aisles to retrieve books, journals, and other materials.

With all that space freed up by the bookBot—around 30,000 volumes still live in plain view—Snøhetta set about filling the place with screens, from touchscreen kiosks and browsable visualizations of books by subject matter to the full-on virtual environments students can create in the Teaching and Visualization Lab. 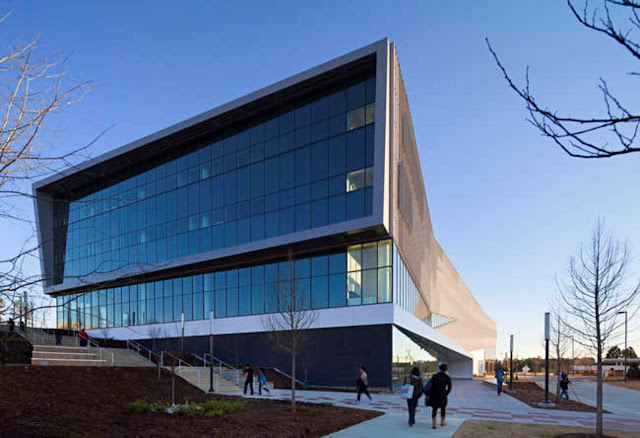 The program also includes nearly 100 study rooms, two learning commons, auditoriums, and the Makerspace, which is outfitted with 3D printers, a 3D scanner, and a laser cutter. 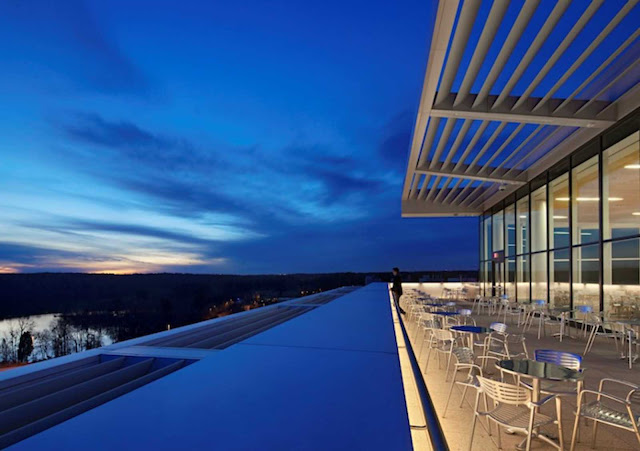 The university points out that high-density automated shelving systems like the bot—which is really four robots—has long had widespread use in industries like auto manufacturing and textile production, but now could have far-reaching implications for how we set up the research libraries of the future. 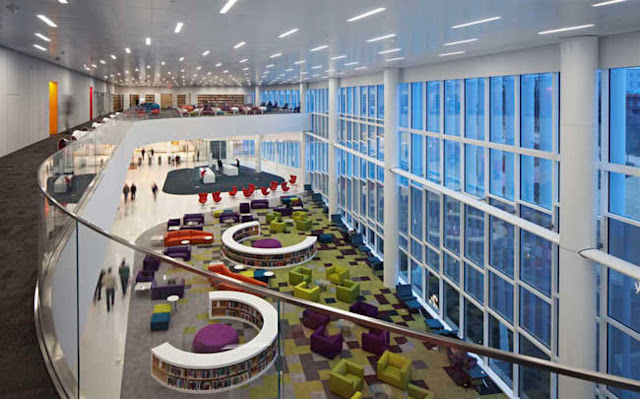 The long rectangular volume provides 221,000 square feet of space for up to 1,700 students in traditional and informal study rooms, technology labs, and lounges. 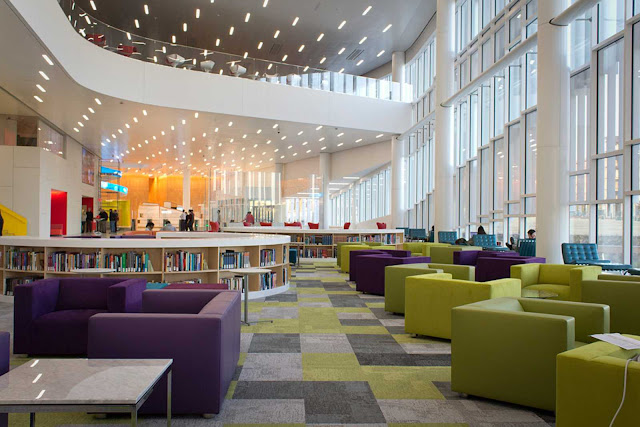 An envelope of fritted glass crossed by a zig-zag of aluminum sun shades lets in daylight and permits views to a nearby lake. An automated book delivery system (see slide 4) reduces the space needed for stacks and can accommodate a 2 million volume collection. 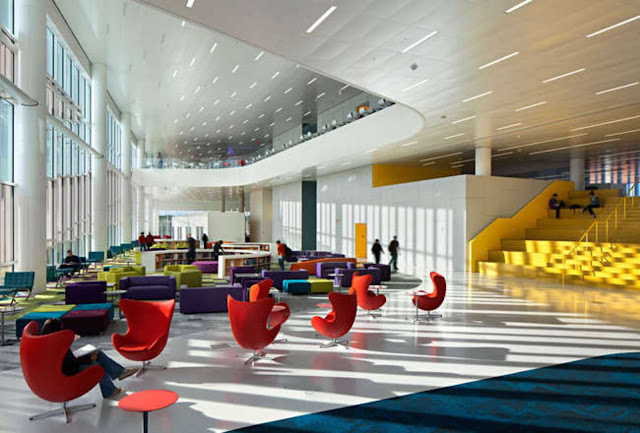 In addition to library functions, the facility also includes academic offices, an auditorium, and a political think tank. NC State University has committed to lead by example in advancing sustainability as a moral imperative and as an economic advantage; The Hunt Library is a model of that leadership. 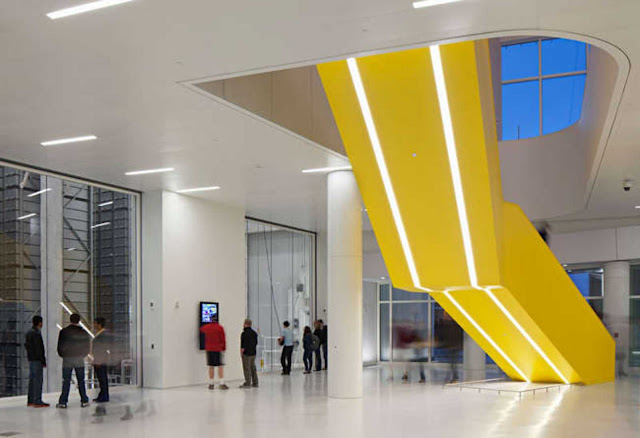 Shaded by its beautiful solar fins, warming its water with rooftop solar panels, cooled and heated by innovative chilled beam and radiant panel systems, filtering storm runoff with beautiful green roofs and the Rain Garden, and flooded with natural light, the building has been designed for a Leadership in Energy and Environmental Design (LEED) Silver environmental rating.