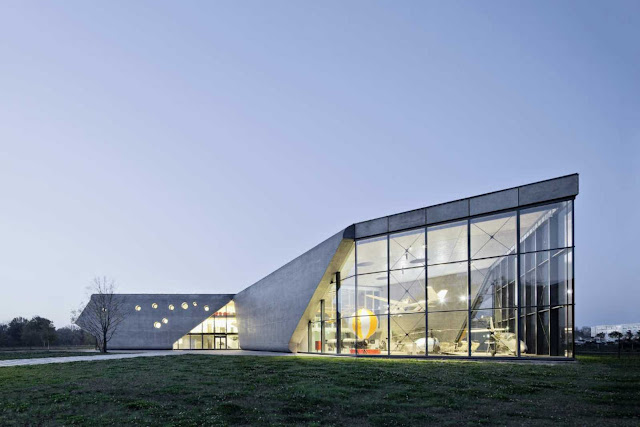 The Muzeum Lotnictwa is one of the largest museums of aviation in the world. It is located in historically preserved buildings and hangars of the former historic airfield of Rakowice-Cyzyny in Cracow, the first airfield on polish terrain, build in 1912 for the air fleet no. 7 of the Austrian-Hungarian Empire. 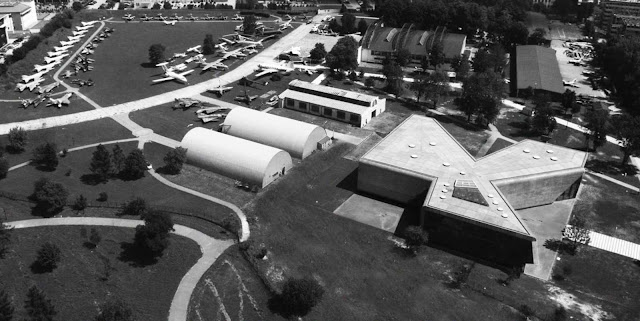 In 2005 a competition was launched for the new main building — the first pan — European competition for architects, after the accession of Poland to the EU, to be won and realised by a German architect. The idea of flying, the spirit of the place, the structure of the historic airfield — the new building for the Museum of Aviation takes up these references intellectually and synthesises them into an expressive and emblematic structure. 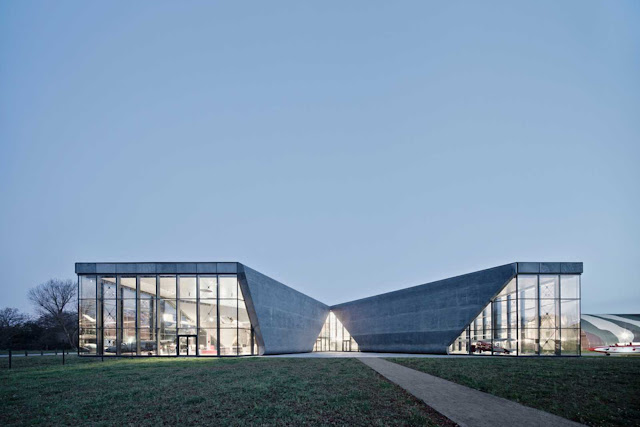 The old hangars set the modular scale for the footprint (60×60 m) and the height (12m) for the new building. Developed from this modular scale-cut out and folded, as if made like a paper airplane, a large structure has arisen — triangular wings made of concrete and yet as light as a wind — vane or propeller. Size and orientation of the wings got developed out of three different functions. 4500sqm usable area on three floors is for disposition now. Intertwining spaces provide good orientation for the visitor.

Entering the building one has the choice to go into the education wing with a voluminous 3D-cinema or directly into the exhibition area with the planes. The wings are generously glazed, opening in all directions. The exhibition thus links visually with the landscape around it and offers a view to the apron and the planes on display outdoors. The airplanes in the North wing seem by no means enclosed, but rather having been placed in shelter, ready to roll out onto the runway at any time. 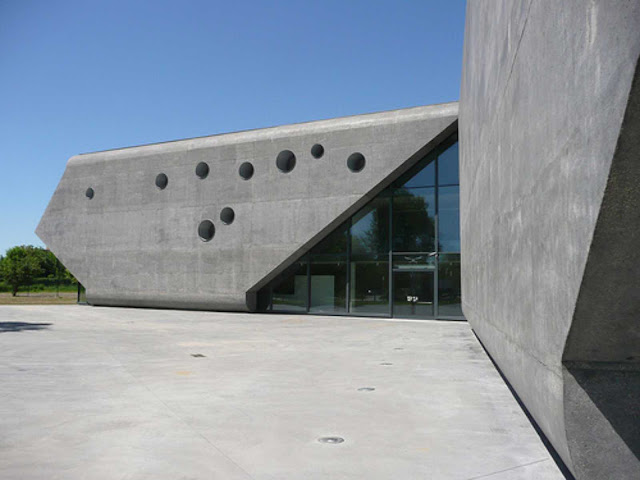 The first floor is occupied with the conference room seating 150 people, a bibliotheca, a multimedia section and a restaurant with bar over viewing the exhibition. The offices for administration are in the second floor offering views towards the park, into the exhibition or through bull’s eye windows onto the former airfield. The new museum for aviation appears not as a “house” — it yields a subtle functionally expressive architectural sculpture. 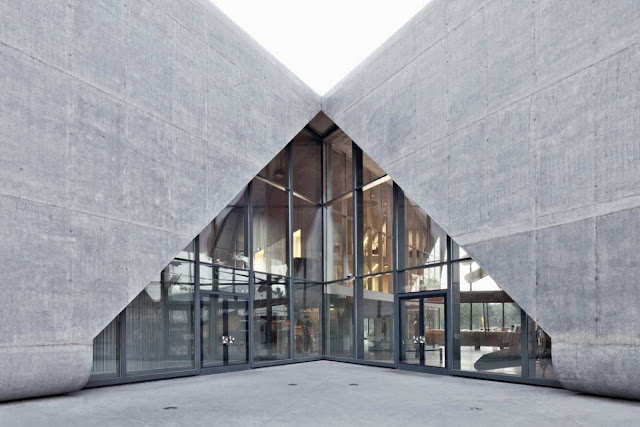 Different temperature zones, natural ventilation and intensive use of daylight minimize the need of energy at its source — the use of natural and well patinating and ageing materials reduces the impact of the environment and future maintenance costs. The concept is based on natural ventilation in all three wings. Only the cinema and the auditorium will get supply air and exhaust air by means of a heat exchanger with air supply from an earth channel. This allows for warm supply air in winter and cool air in summer. 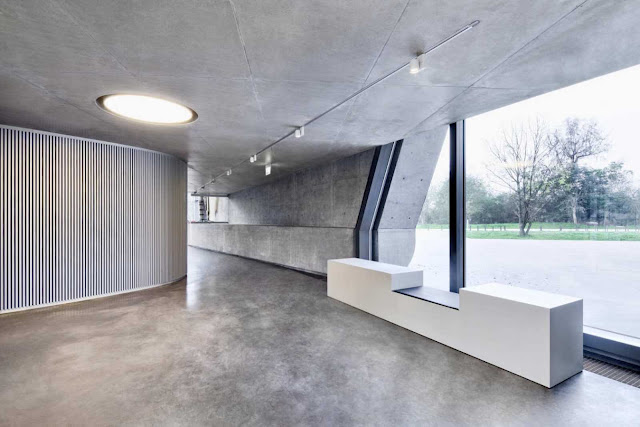 The wings are heated differently, depending on their use: 20° C the offices, 18° C the Education Wing and 15° C the Main Exhibition Wing. Compared to an all-around 20° C room temperature, 40% of the energy is conserved for heating these 10 m in high and up to 10250 m3 volumns. The big storage capacity of the concrete walls and natural ventilation provide, cooling during the night in the summer. Directed to the north and with a 200 m² big door, the exhibition is always throughout naturally ventilated during the summer and of no need for air conditioning. 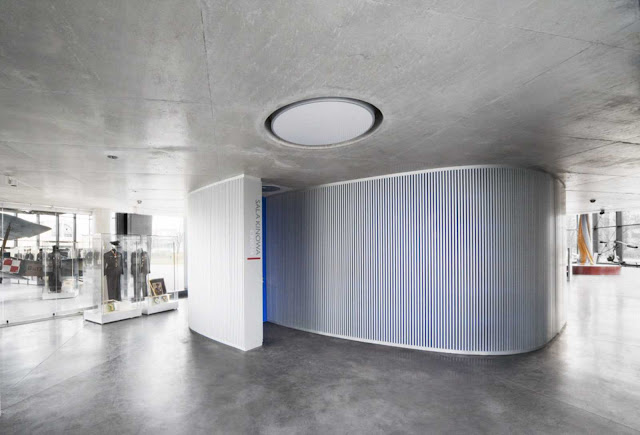 Besides the generous use of daylight through the facade and big skylights; an energy-efficient light system is realized throughout the building. This includes light directing commutator sections and the use of energy saving lamps in combination with motion detectors. Arup International in Cracow planned the M&E and as well the structural services for the project. Airplanes are presented side by side on the outside along the former taxiway up to the runway. The authenticity nearly makes one forget that those are ‘just’ exhibits. Beside the airfield are eight historical buildings and hangars in which the exhibition of precious objects takes place. 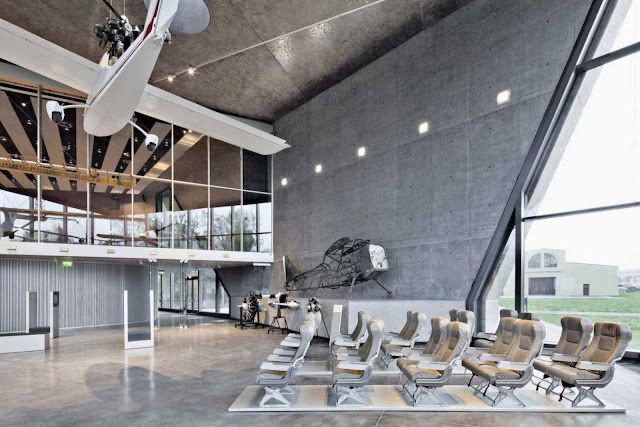 Episodes and themes of aviation are summed up in each building. Their exhibition is expanded to the outside with big concrete patches, giving space for additional open-air presentation. The landscape architects from ST raum a, Berlin, planned this six hectares large aviation exhibition park. The design connects the new buildings with the existing buildings through the completion of old alleys and the creation of new park paths. A tour through the history of aviation is developed. The path between houses through the park gives the visitors time to process the accumulated impressions and then resume to take in new ones. 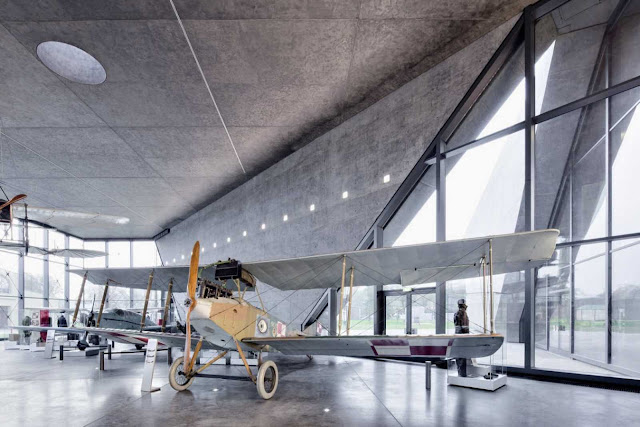 The collection encompasses over 200 planes, aviatic artefacts, technical documents, historical photos, one of a kinds planes, air planes from the last century in their original condition and a lot of Russian planes from the Cold War. Furthermore, the museum has with 80 exhibits of the pioneerage, one of the biggest, and from a technical standpoint most interesting, collections of motors, worldwide.