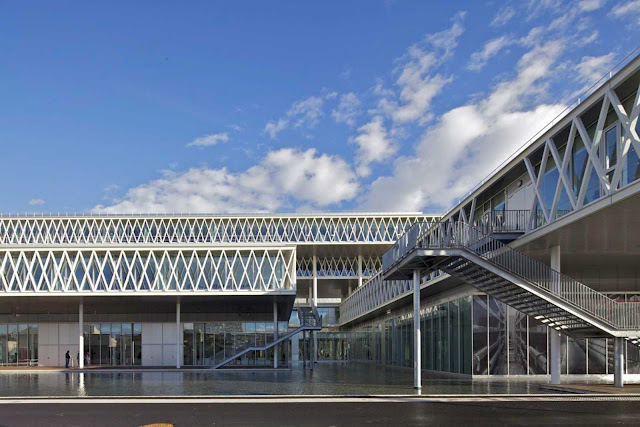 The National Archives, created during the French Revolution,  hold documents of political regimes from the seventh century until today: the papyri Merovingian, the processes of the Templars, the diary of Louis XVI, the Will of Napoleon, the Declaration of the Rights of Man and of the Citizen, the oath of the Jeu de Paume , … 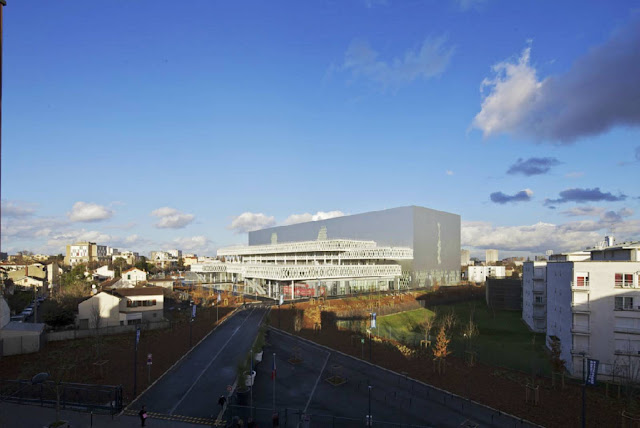 The design of the New National Archives of France has followed the intent of enhancing the geographical and architectural landscape of the area Pierrefitte sur-Seine Saint Denis, where the building inserts itself.

The complex has not been designed as a self-referring architecture, but as a work that could hold the memory and the collective identity, at the same time open to contemporary artistic expressions. It has not been thought in a contemplative perspective, but in a perspective of discovery, research and participation for the audience. 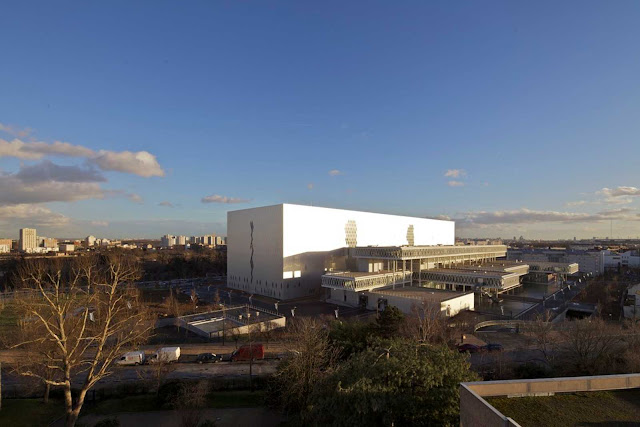 The project is composed of two main ”bodies”: one that extends horizontally the other with a tension in height. The first, stretching out towards the city, consists of six cantilevered volumes called ”satellites” that accommodate the offices, the conference room (300 seats) and the exhibition room. 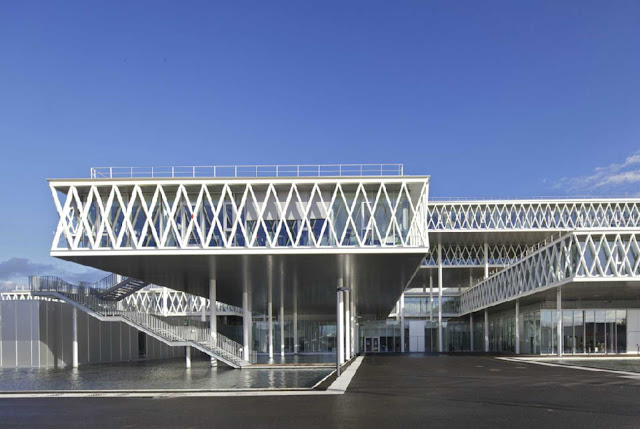 The facades, mostly glazed, give lightness and transparency to the volumes of different proportions, that follow each other and overlap in ”suspension” on the surfaces of the water. The building that accommodates the Archives (220 stock rooms on 10 levels) is an imposing monolith thought as a place dedicated to memory and research. It houses the archival documents and the reading room (160 seats). 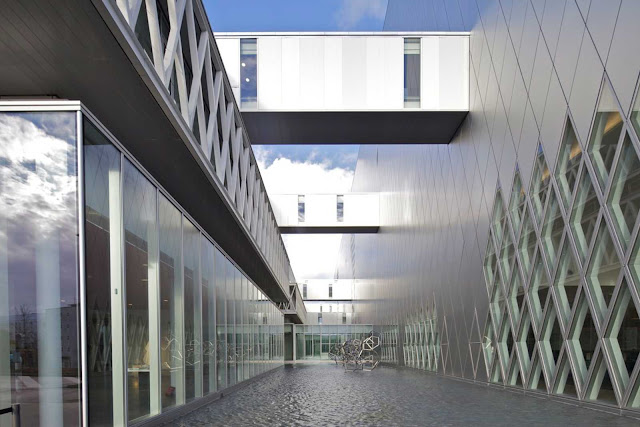 The facades of the monolith are coated with aluminium ”skin” that runs throughout the volume, except for some glazed insertions that allow the amount of natural light in the reading room and the entry route. The basins insert themselves between the building of the Archives the ”satellite” volumes and at the foot of the satellite volumes. Walkways above them create a connection between the volumes. 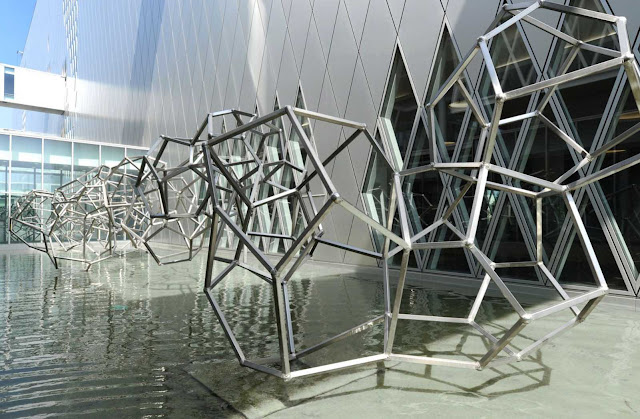 The facades of both ”bodies” follow a lozenge geometry that is repeated both in the aluminium cladding of the building of the Archives and in the glass facades of the ”satellite” volumes. The sculptor Antony Gormley has signed one of the three artistic interventions. Gormley’s work stands out among the monolith and volumes ”satellites”. 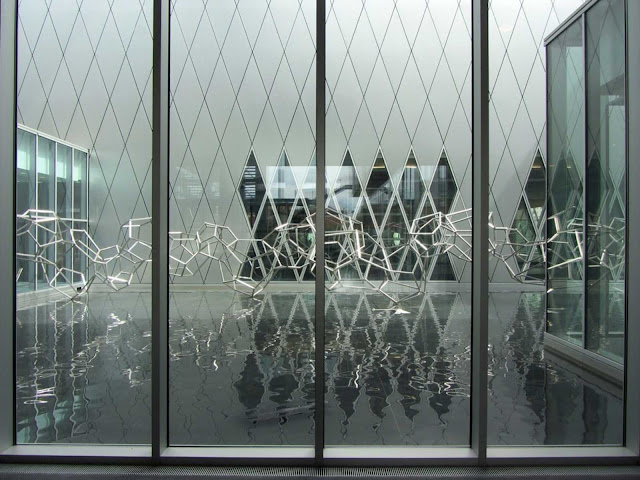 A precious sculptural object that rises from the veil of the water below, like to draw strength from it. This  redesigns the spaces in a contemporary way, winding along the facades of the architectural complex. The geometric faces articulate the artwork along its passage and give life to the structure of a chain of dodecahedra, which reflects and projects itself between the basin of water and the mirror surfaces of the volumes. 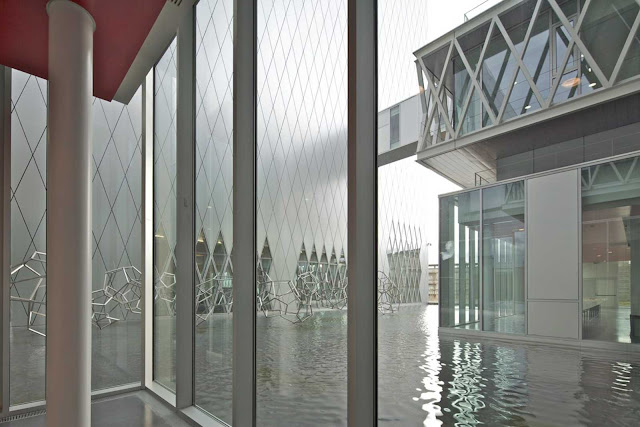 The importance of context, and therefore the importance of the territory, assumes concrete form in the landscape intervention by Florence Mercier. His design of green spaces has created a real interaction between nature, architecture and the audience. The green walk that introduces and takes the visitor to the complex is like a stage that alternates geometries, shapes, colours and shades. 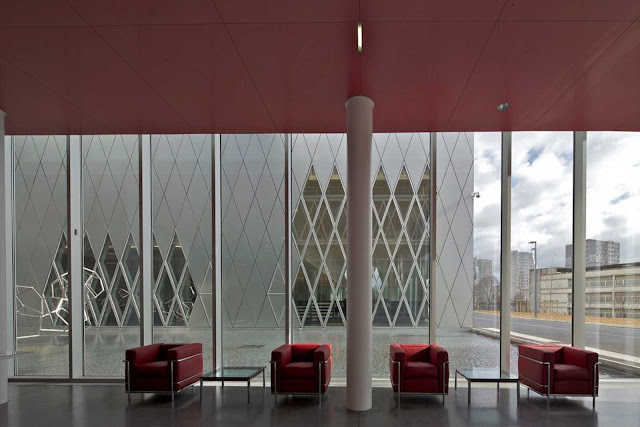 A project that aims to give emotions. Two “bodies”, two “worlds”, symbolically connected by walkways that, in a constant cross-reference, creates an identity that is rooted in the memory of the past with an eye to the contemporaneity and the future. The project reflects identity and memory that belong to Franceand to all humanity.