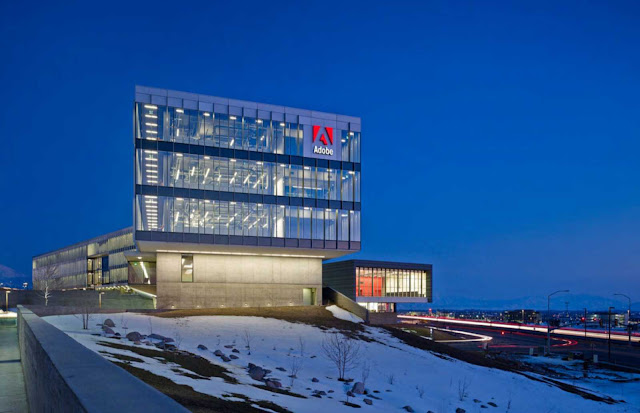 As a global leader in digital media and digital marketing, Adobe has attracted some of the nation’s top talent, people that are inspired, that want to be a part of something truly important and exiting. Employees expect to find more than just a job at Adobe – they expect to find a place that encourages them to do something incredible with their creativity and drive, and ultimately their lives. 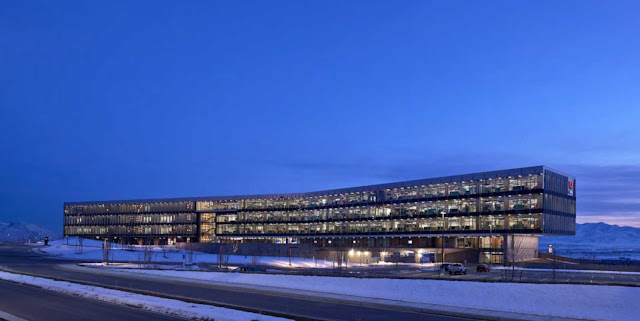 As a result, customers continue to delight in the products they craft. In 2009, Adobe made a surprising acquisition of Utah-based Omniture as an initial step towards its vision of combining its content creation tools with Omniture’s industry leading web analytics, targeting, and digital marketing optimization technologies. In 2010, they hired WRNS Studio as master planner and architect and RAPT Studio as interior architect to develop a new 680,000-square-foot campus in Lehi City, Utah. 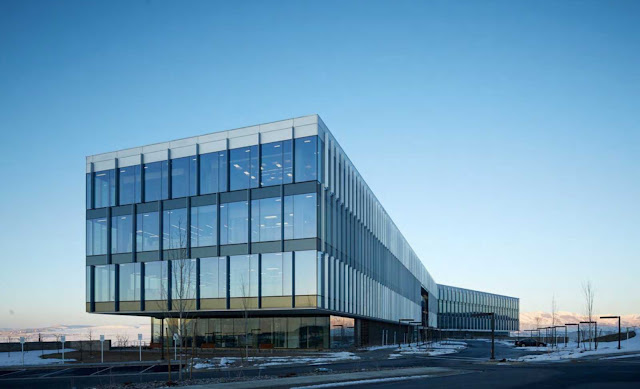 From the very start, Adobe sought to find a different kind of environment for this campus. They wanted their employees to experience their new workplace as a reflection of their most inspired selves, a source of motivation and connection, high energy and thoughtful repose. The campus had to be flexible, functional, sustainable, and fundamentally unique. 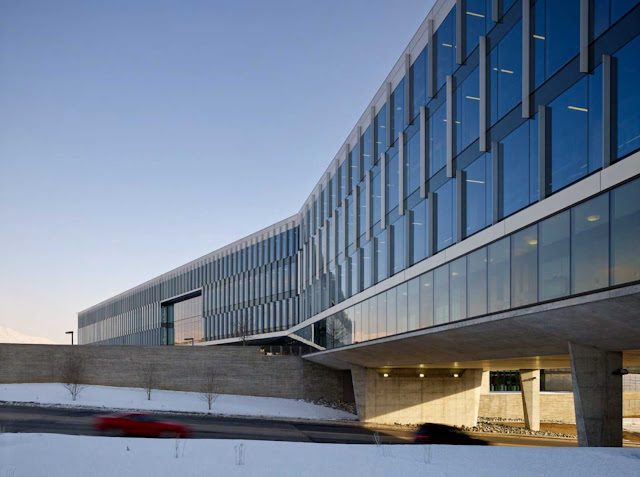 Lehi City is located between Salt Lake City and Provo, approximately thirty minutes from each. Long and narrow, the 38-acre site that Adobe selected flanks Interstate 15 and is bifurcated by a four-lane public road. Adobe chose this site for its proximity to major population centers, public transit, its exposure to the Interstate, and its expansive vistas to Utah Valley, the picturesque Lake Utah, and the striking Wasatch and Oquirrh mountain ranges. 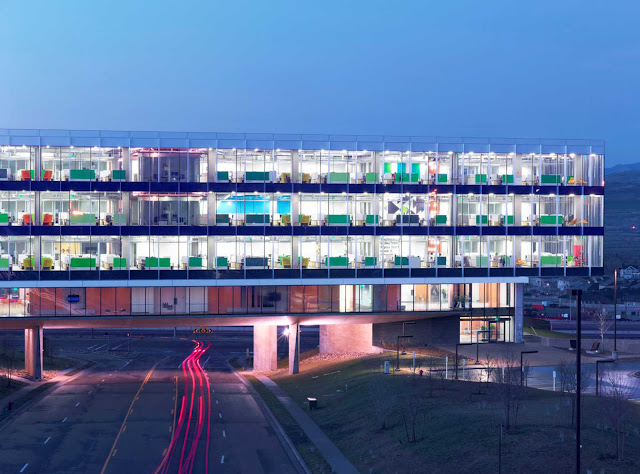 The Interstate is interpreted in the master plan and architecture as a natural phenomena, on the scale of mountains and rivers, to be embraced and celebrated for its dynamic drama. The campus is highly visible to passersby, reinforcing Adobe’s commitment to creating something special and unique to help attract and retain top talent. 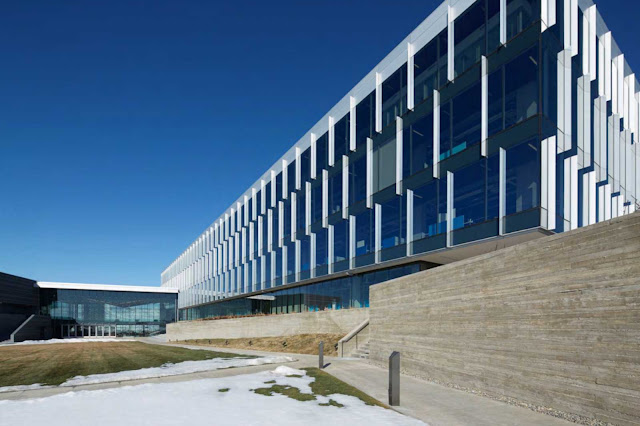 The master plan draws upon the site as a driver for workplace energy and Adobe’s creative spirit by offering a metaphor for the dramatic topology of the Utah Valley. The master plan for the site includes expanded office buildings and can be described as three flowing lines (three, roughly 200,000 square foot office buildings and an 80,000 square foot amenities building) and two spaces that are captured by the lines (a grand atrium and a campus green). Just as the sweep of the mountains shape the inhabited valley, the long sweep of the office floors – scaled to propel the natural metaphor and facilitate workplace interaction – define and embrace the two primary campus spaces. The four-story office buildings are long and narrow, providing all employees with access to natural light, expansive views, and a direct connection to the outdoors – the very reason so many choose to live and work in Utah. 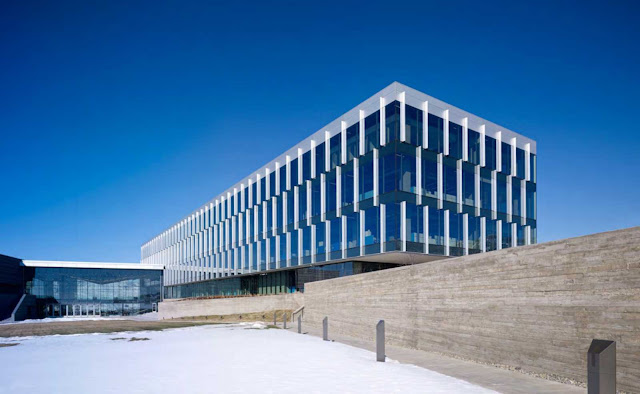 Open stairs and eccentric cores maximize flow and connectivity between work groups in this open plan, collaborative environment. At the heart of campus life is a grand, light filled Atrium, which pulses with activity throughout the week. The Atrium links every workplace and amenity, one to the other, while connecting to the landforms and landscapes that define the site.

Emblematic of Adobe’s commitment to transparency and connection, the Atrium acts as an all-hands space, town center, festival area, and place of quiet reflection with views of the mountains to the South. Spaces for work, play, exercise and eating are arranged strategically around the Atrium to facilitate interaction and a strong sense of community. 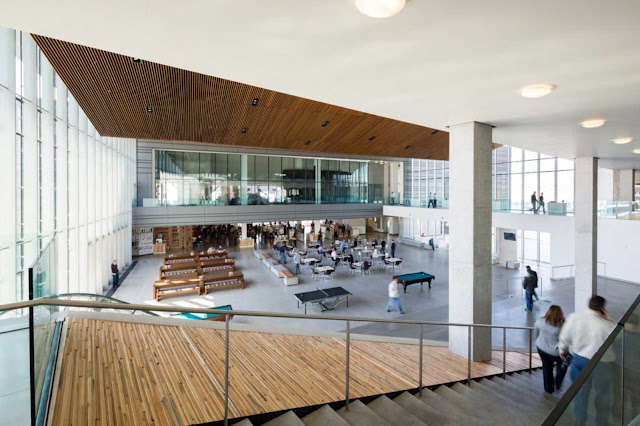 Central to Adobe’s desire to create a strong sense of place was providing employees and passerby with a direct visual connection to its culture of hard work balanced by recreation, sport and health. In response, spaces for each spin out from the Atrium and engage the surrounding landscape. Likewise, the expansive glass facades make visible the activities within – showcasing not only people working but also eating in the café, exercising in the fitness center, and playing on the basketball court.