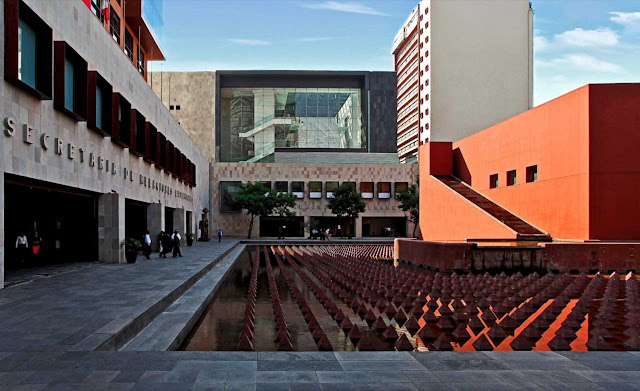 The Museum of Memory and Tolerance integrates the remembrance of genocides provoked by racial discrimination (Memory) and the unforgiving legacy that this leaves us with, and must lead us to, respect of others and coexistence in diversity (Tolerance). This museum provides Mexico a space of study within a democratic and multicultural frame for the development of future generations. About its Spatial Concept and Content… 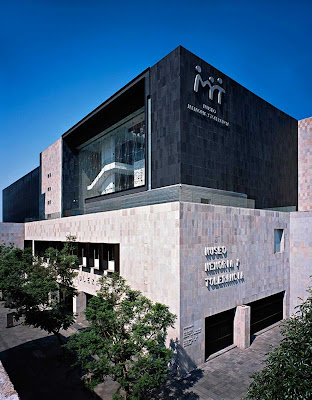 The Museum is constructed using a mixture of reinforced concrete and steel in a seven level structure (three of permanent exhibit + four complimentary). It is set on a continuous colonnade of the Plaza Juarez complex, designed by Legorreta + Legorreta Architects on the site of the former “Hotel Alameda” (which fell during the 1985 earthquake). Arditti + RDT designed the Museum with the rooted belief that the only hope for humanity lies in the education of future generations. 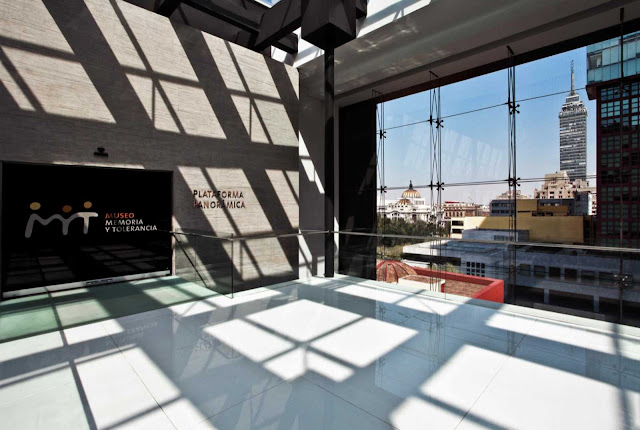 Therefore, the main force behind the conceptual idea of the Museum is sustaining the “floating” Children’s Memorial. In order to anchor this main motif of the interior atrium, the volume that contains Memory and Tolerance is displayed like two open arms embracing the Children’s Memorial. This Memorial has two interrelated intentions: remembering approximately two million children who have been exterminated in genocides, and educating our children to foster future coexistence among all people. 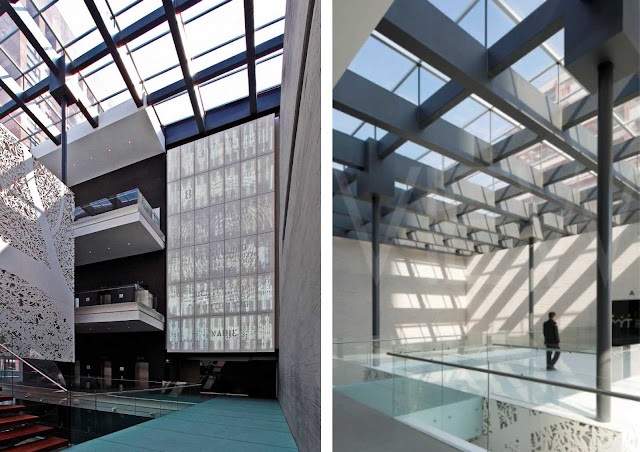 On the interior atrium, the different functions of the building are read as independent volumes. The Museum’s Permanent Exhibits (Memory and Tolerance) are held behind the exposed concrete “L” shaped mass. A wooden box holds the Auditorium, which cantilevers over a ramp that leads towards a sunken Children’s Educational Area. At the same time, its top serves as a base to host the Temporary Exhibition Hall, which attracts visitors through a recessed transparent enclosure. 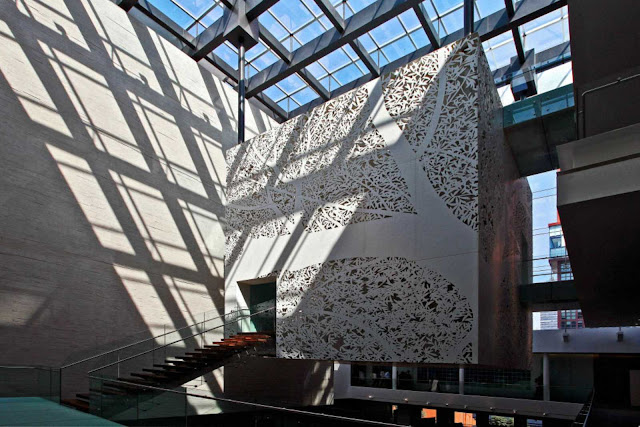 The Administrative Space is held behind a dark granite element, separated from the upper main exhibition area by a glazed gap that integrates an Educational Center linked by a transparent ramped corridor to a Public Library within the colonnade overlooking the Juarez Plaza. Horizontal circulations are incorporated as superimposed balconies that provide different perspectives of the open interior space. The journey through Memory and Tolerance begins on the upper level of the Museum. 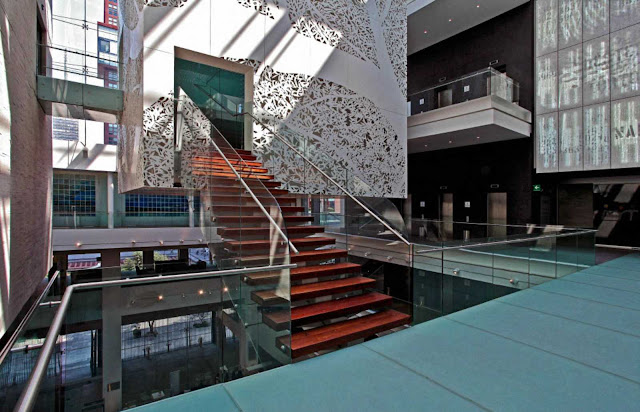 Standing above the suspended Memorial, the visitor overlooks the reality of the free outside world (The Mexican Palace of Fine Arts, The Secretary of Foreign Affairs, The Plaza Juarez Square, The National Notaries Archive, Etc…) and is about to be moved from direct sunlight into some of the darkest episodes of mankind. Memory and Tolerance are contained on the top three levels of the Museum (5th, 4th and 3rd). Descending from the upper level, Memory is displayed in exhibition halls in the top two floors. 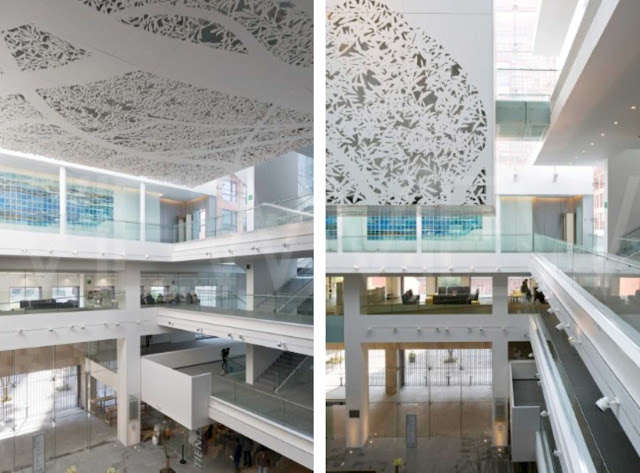 Included in these exhibitions are genocides and crimes against humanity relating to the Holocaust, Armenia, Former Yugoslavia (Srebrenica), Rwanda, Guatemala, Cambodia and Darfur. Transitioning from Memory into Tolerance, the visitor is temporarily taken outside to the Atrium into the olive skinned Children’s Memorial (created in collaboration with the Dutch artist Jan Hendrix) within a naturally lit space, where a cascade of 20,000 “tears” symbolizes the victims – one for each 100 vanished souls. Exiting the Memorial, the visitor moves down a staircase above the open space and into a crystal walkway. 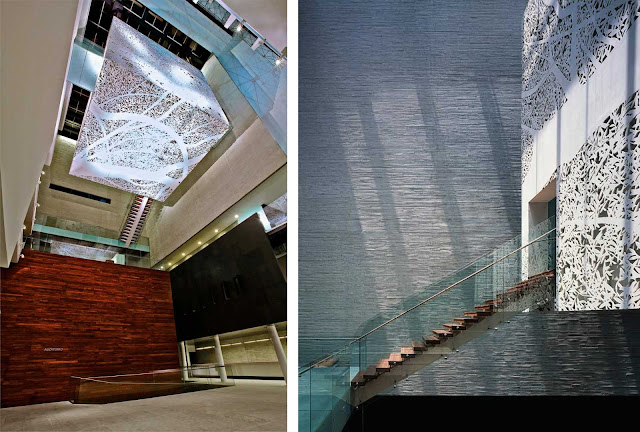 A mural by the Mexican artist Gustavo Aceves marks the re-entry to the permanent exhibition on Tolerance on the third floor. This section is comprised of 19 exhibition halls designed to didactically reflect on topics such as stereotypes, prejudices, discrimination, hate and violence. The space is designed to create awareness of the importance of dialogue, the implication of our attitudes, words and actions; the importance of respecting and embracing social, cultural and religious differences; and the responsibility of each individual to promote peace and prevent future discrimination and intolerance. 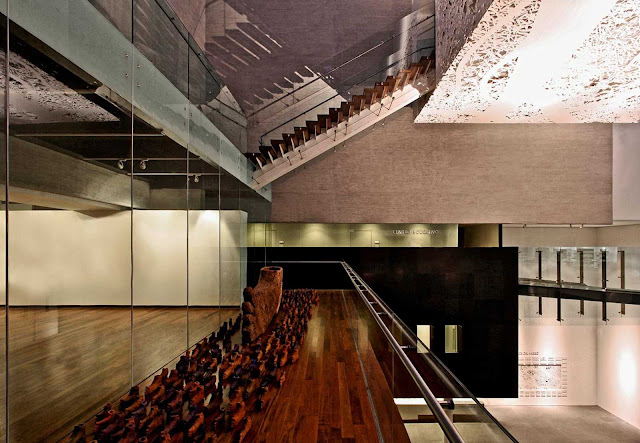 Enabling to make a final reflection, a secluded, quiet introspection space was created in collaboration with the late Mexican artist Helen Escobedo (recipient of the National prize of Art and Science 2009). The space is a minimalist room of tall proportion where a suspended ceiling/platform moves constantly downward and upward, with an oppressing and liberating sensation. Since the overall exhibit is not apt for children under 12, a specific sunken area was conceived where through workshops, games and stories, children are shown the value of tolerance, respect and diversity. 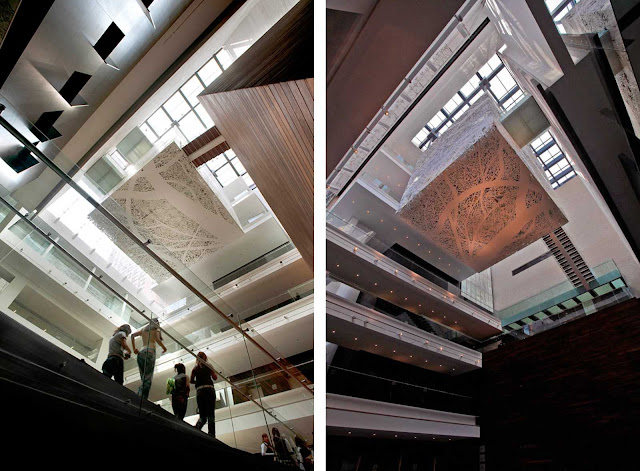 The Museum also contains a cafeteria and a store. As one ends the journey, a final window frames the exterior view across the street towards the Benito Juarez Memorial, where the great Mexican leader who advocated for freedom is remembered. His famous words will never be forgotten: “Among Individuals, as Among Nations, Respect for The Rights of Others Is Peace.”