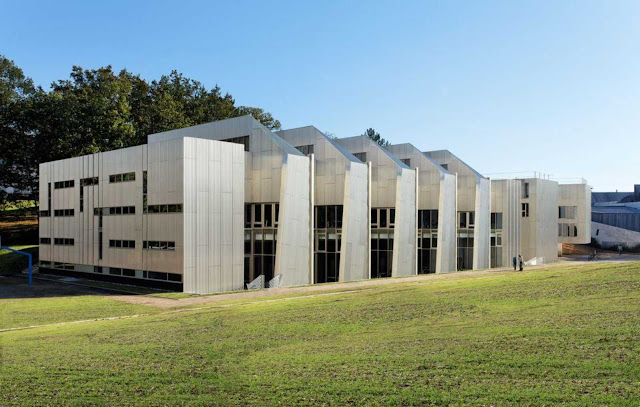 SITE | the articulation of the building with its environment
The site, situated on the campus of the University of Versailles, falls within the historical district of the Château de Versailles which imposes, amongst many constraints, minimal building heights. The campus itself is a historical domain having been the property of the car manufacturing family Panhard. 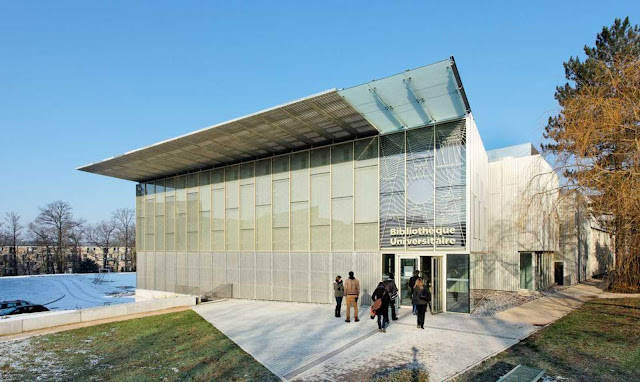 In the nineteen sixties, buildings on campus were built around the “istorical centre” constituted by the Panhard pavilion and its gardens. Devoid of any particular character, these structures do not impart a strong identity to the campus. he creation of the sporting grounds left recesses and embankments in the park’s natural terrain. Before the project’s intervention, the site was cut in half between the sloped park to the east and the vast sporting grounds to the west. 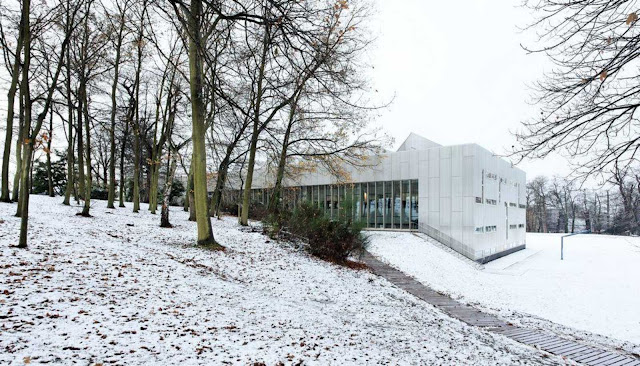 The University Library is set on this boundary, articulating the two spaces. The building communicates between the two sides of the campus rather than forming a mass permanently cutting the site in two. It has no main façade. It unifies the multiple aspects of the site. From this central position, its multidirectional nature has been achieved by juxtaposing three volumes with four different directions (north, south, east, west), intersected by a series of voids, allowing abundant light to enter as well as creating transparencies between the park and the sporting grounds. 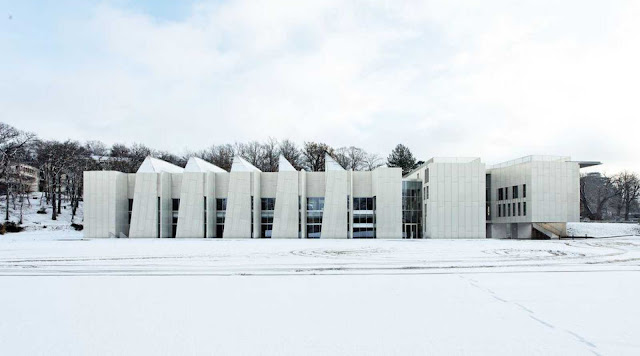 The three separate volumes express the three parts of the program: the entry hall, the reading rooms and internal spaces. The shape is an expression of our perception of the program and our response to the requirements of a low energy building, fully acknowledging lighting and thermal comfort as well as highlighting the site’s contrasts. 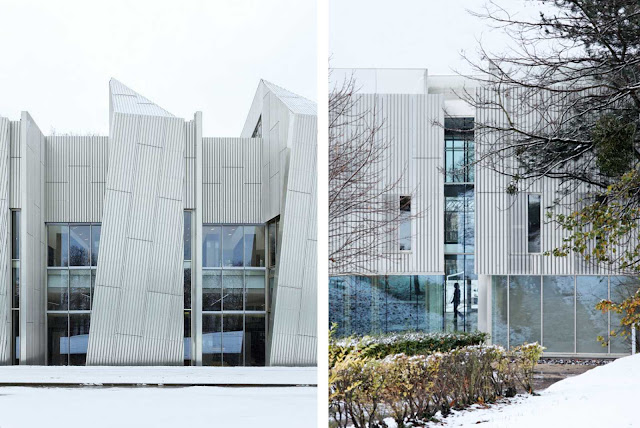 PROGRAM | fluidity and flexibility of the university library
Typologies such as university libraries are today subject to many questions related to the place of paper versus the internet. More and more students go to libraries, despite having computers, to seek optimum working conditions: space, quiet, silence, and help if needed. Today the library is no longer a place to store and preserve books, but a place to live. In these new hybrid libraries, open and modular floors are paramount to accommodate the on-going developments of our society. 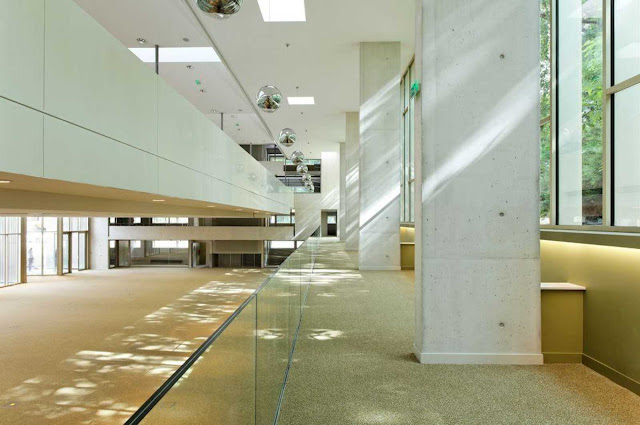 The indoor layout of the University Library has been designed to be as clear as possible: the entry hall at an intermediate level dispersing, by means of a monumental staircase, to the two large reading rooms. Special attention has been put into making the reception area easily accessible and giving them a convivial atmosphere. The play on height changes throughout the structure can be perceived from the entry hall, allowing one to enjoy simultaneous views of different floor levels and displaying the flexible organisation of the library. 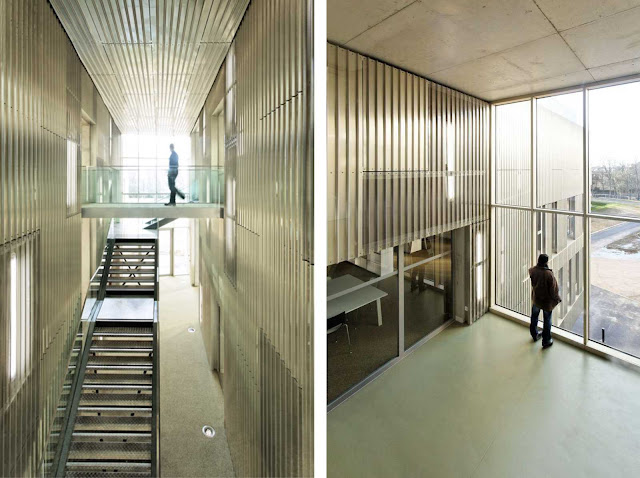 ARCHITECTURAL STATEMENT| an organic shell that reveals the inside
Clinging to the existing paths and slope, the building, like a ribbed-shell covering rough concrete, organises and structures the spaces and views. The inner skin amplifies the idea of an organic architecture, using the sheds to suspend the upper floor beam. The large trusses within the sheds suspend the upper reading room thus liberating the floor plan from any columns. The inside and outside thus communicate freely and the facades are a result of this relationship: they create an “indoor show” for visitors. 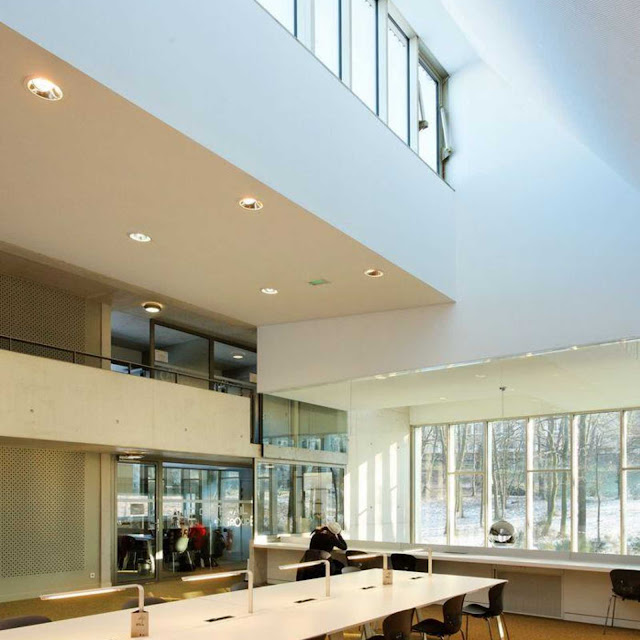 The east facade is completely open to the woodland and is naturally protected from the sun by a curtain of trees. Smooth and straight, it allows those who walk outside to discover alongside them the two reading floors as well as allowing people on the inside to benefit from the view of trees and plants that is offered to them. In contrast, the west facade is structured by a series of closely-knit cells that become the form of the sheds on the roof, drawing in the light with a northern exposure, thus avoiding direct sunlight. 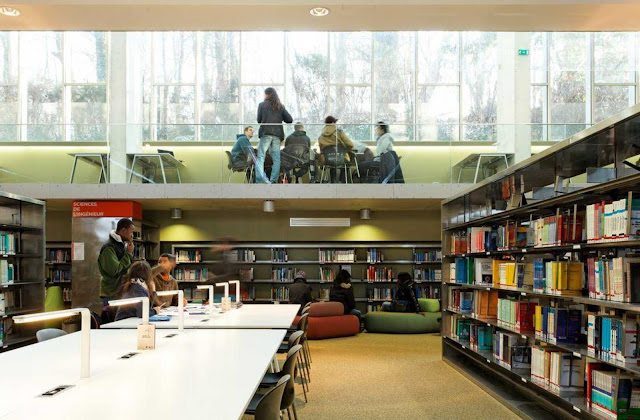 The transparency of the façades and the openness of the floor plans allow slanted and distant views. The north facade is pierced following the disposition of the study rooms. Lastly, the entrance on the south facade or Trombe Wall (named after the physicist who invented the principle) is formed by a darkly stained concrete wall in front of which is placed a glass screen. 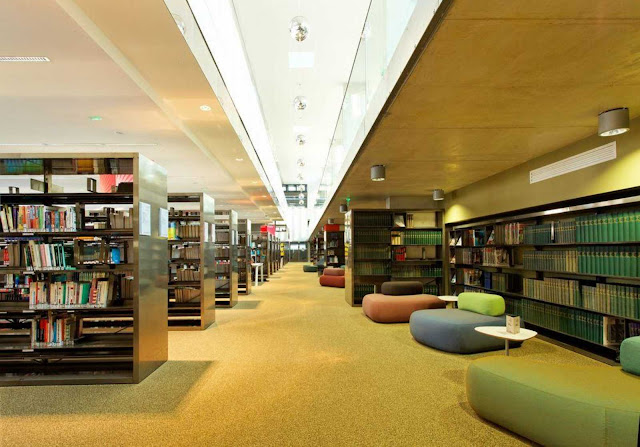 The air circulating in the gap between the two layers is heated by the sun to help heat the building. Overheating risks are reduced by the shadow brought by the brise-soleil during the summer. Overall indoor ambiances are determined by natural light and visual framings on the surrounding landscape. The colour variations of the furniture (going from green to blue) are like reflections of the trees and sky outside, which vary depending on the light, also evoking the metal exterior cladding.