Skip to content
A breathtaking art installation gives people the chance to walk in the clouds by creating a thick blanket of fog on the roof of a city car park. Cloud Parking, which was created by Japanese artist Fujiko Nakaya in Linz, Austria, back in 2011 uses a specially designed fog system to artificially create clouds which completely envelop visitors.
Powerful pumps blast out water at very high pressure through custom-designed nozzles which have holes just 120 microns wide, transforming it into dense fog. Artist Nakaya, 79, has used the technique to create dazzling installations in a number of different locations including a forest in Canberra, Australia and most recently in San Fransisco Bay. She said: ‘Scientifically, cloud and fog are the same, but conceptually, there is a big difference.’ 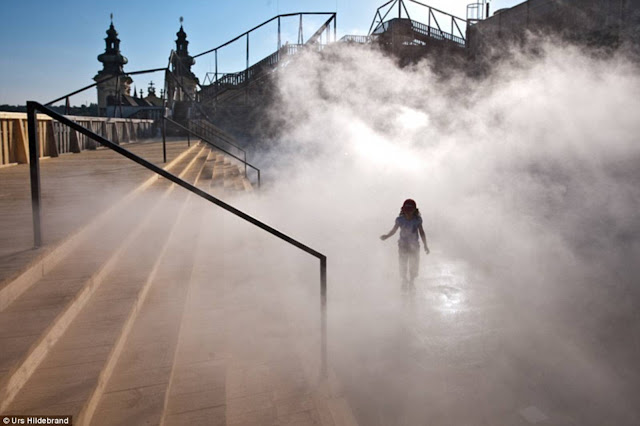 The effect varies considerably depending on the wind, temperature and humidity which all have a huge effect on how dense the fog will be. Ms Nakaya has described fog as ‘an interactive media’ which ‘conjures dialogue with nature’ and ‘reveals the innate’ whereas clouds have ‘never left the realm of romanticism,’ reports My Modern Met.
Source: dailymail.co.uk
48.3069414.28583