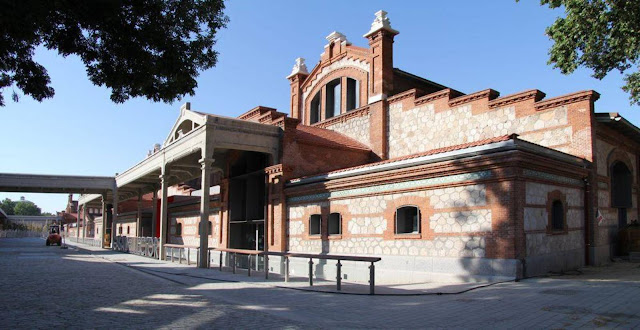 Madrid’s Old Slaughterhouse is becoming an important Center for Contemporary Creation in Madrid, organizing architecture competitions that can give rise to proposals that will recover its 148 300 m2 to house creative processes, artistic training and participatory dialogue between the arts. 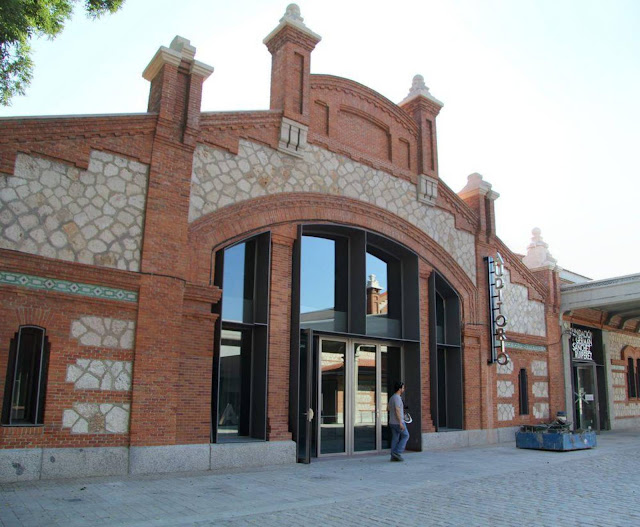 The Reader’s House project is the result of a competition that took place in 2006, in which Ensamble Studio won the first prize. The purpose of the competition was to restore the warehouses 13, 14, 17b and 17c of the Old Slaughterhouse to incorporate a new educational program. 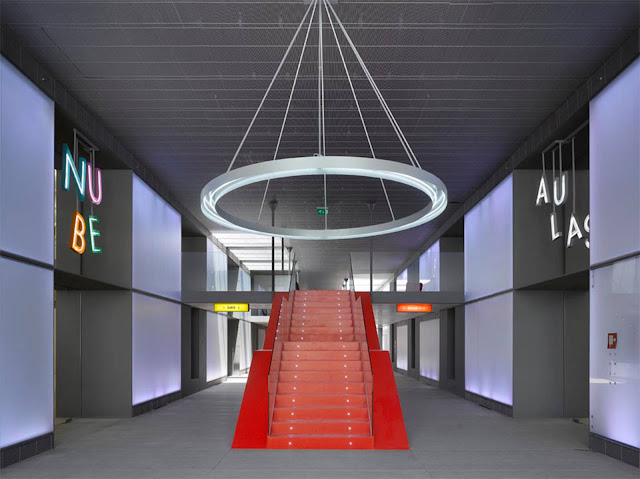 The proposal made by Ensamble Studio maintains and enhances the original character of the industrial complex, by imposing a new order to the one of the pre-existent buildings. The confluence and relationship of the new system and the existing one forms a new space. 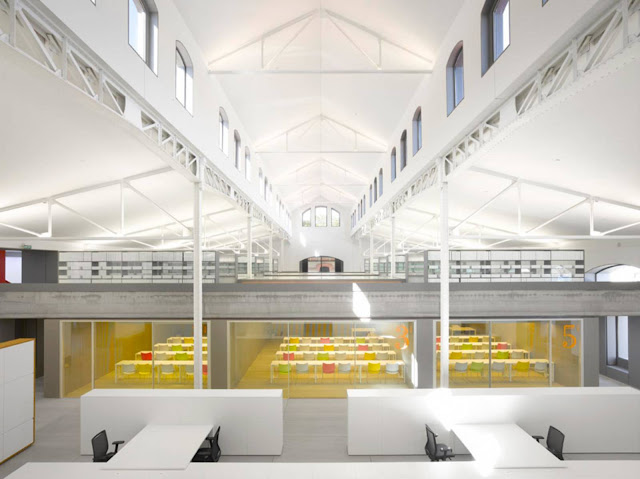 Two physical, perceptual and activity levels are defined forming a mutable scenario. The upper level, constructed with precast concrete beams of 40 Tons each, is a space for research and study. These beams are bridges, aerial streets, vectors of activity. 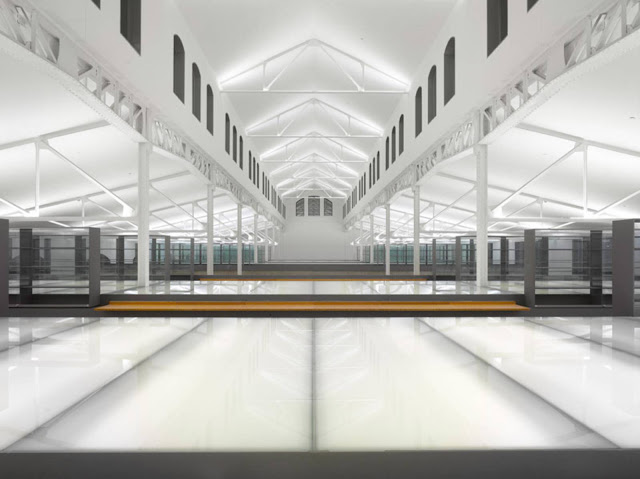 In opposition to the basilica-like structure of the warehouses, longitudinal, light and metallic; the new structures are inserted through the windows and sew the space transversally, giving unity to the complex formed by the warehouses 13 and 14, which were previously independent buildings. 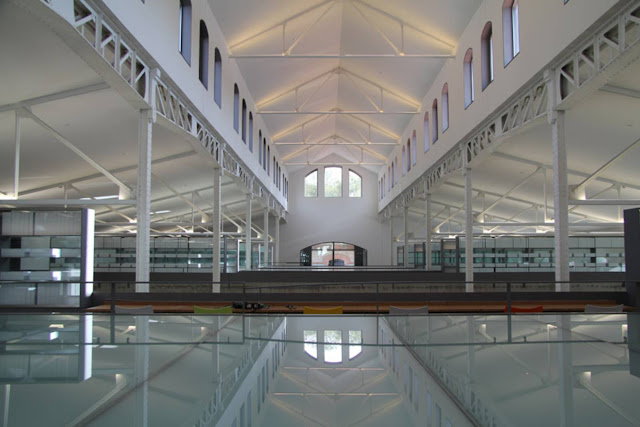 The lower level participates, without losing its essence, of the rhythm marked by the upper level. Dynamic and mutable, this level will host the educational and cultural diffusion activities, enabling their future redefinition. 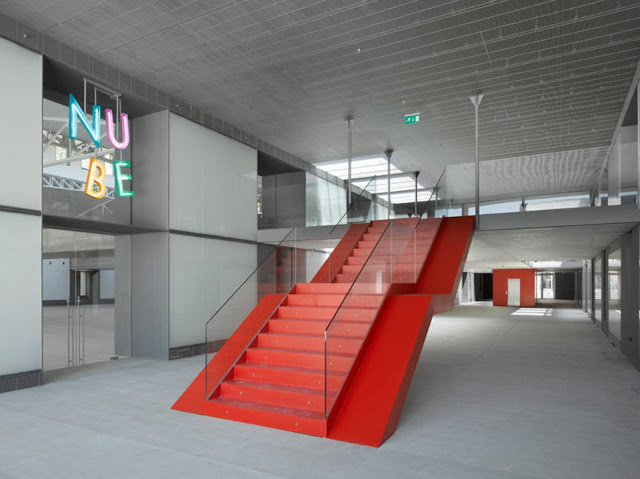 The warehouse 17c houses the office area, while the warehouse 17b becomes a multipurpose room or auditorium. The pitched roof of the auditorium is rebuilt, respecting the original profile. However, inside, a different order is re-imposed. A vault generated by aluminum slats encloses, dresses and lights the space. 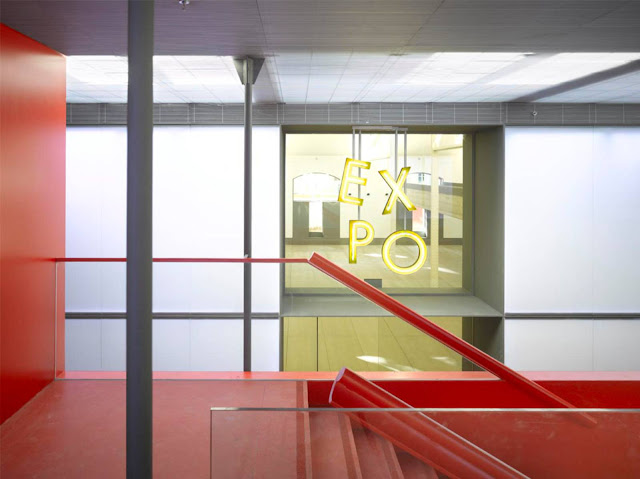 The material palette takes into account the industrial tradition of the Madrid’s Old Slaughterhouse complex. Granite, steel, glass and precast concrete. The protected architectural complex required a surgery of great precision to retain its appearance and its internal structure, while incorporating the new use. The intervention thus implements from the beginning the consolidation of the existing structure, in a precarious state of stability, and the insertion of a new structure that allows the transformation of the space for the new activity, respecting at all times the original structural elements. 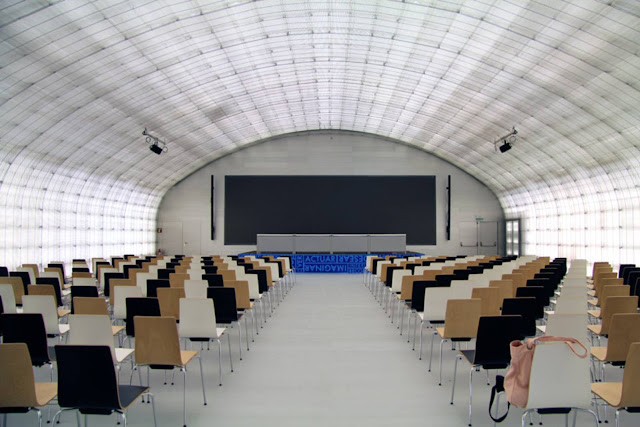 The delicate metal interior structure and the masonry perimeter wall that defined the original container, today continue to define it, and are complemented by the precast concrete structure added that clearly differs from what was there before, preserving the memory of the place and starting a new story in it. 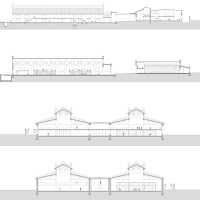 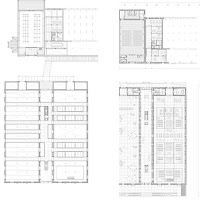