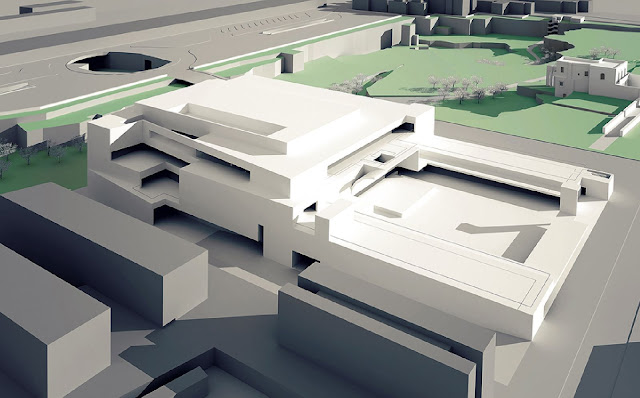 The City of Arts and Music was the result of an international competition, organized by the Municipality of Lecce, in order to restore and integrate the city’s contemporary urban fabric with its ancient quarries (Cave di Marco Vito).
Located on the extreme southeast end of Italy, the plot sits behind Lecce’s railway station in a transition slot of rare beauty, cut out through hundreds of years as the stone was extracted to build the city itself. The historic and plastic characteristics of the site turned this canyon like structure into the project’s constant source of inspiration, in a kind of conceptual palimpsest that crosses over its three main elements: the bridge, the park and the auditorium.

The suspension bridge (Via del Ninfeo) works as a hinge that seamlessly links the old town and the new periphery, not only by literally connecting the northern and southern metropolitan areas but also by making it possible for the park to move unearth it from east to west. In a sense, one could say that Álvaro Siza reused the founding principles of any roman settlement, where the bridge and park respectively become symbolic axes – the Cardo and Decumanus Maximus.
Programmatically however, this east-west orientation is perhaps clearer between the existing Masseria Tagliatelle and the proposed Music Hall. Their communication and high-ground position, alongside the vertical walls of the quarry, will translate into a volumetric tête-à-tête which should become the centerpiece of many viewpoints along the park (Parco Urbano delle Cave). 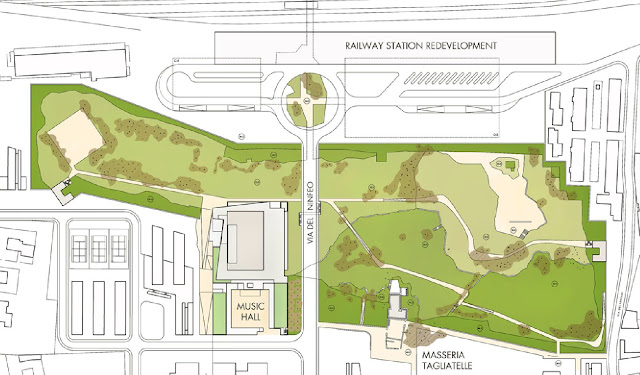 An image of garden platforms spread over the landscape seems an appropriate solution for this project, since it allows for the association of public space and territorial identity, maintaining most of the original elevations and outlines. The poetic reappropriation of the site’s tectonic properties reflects Siza’s attitude toward a lossless change, fusing that which is an artificial human intervention and the natural environment. The architect, like the stonecutter before him, highlights this significant affinity between mankind and the world in which it inscribes its own artificiality, therefore resuming a dialectic relationship with the locus within the historical process. 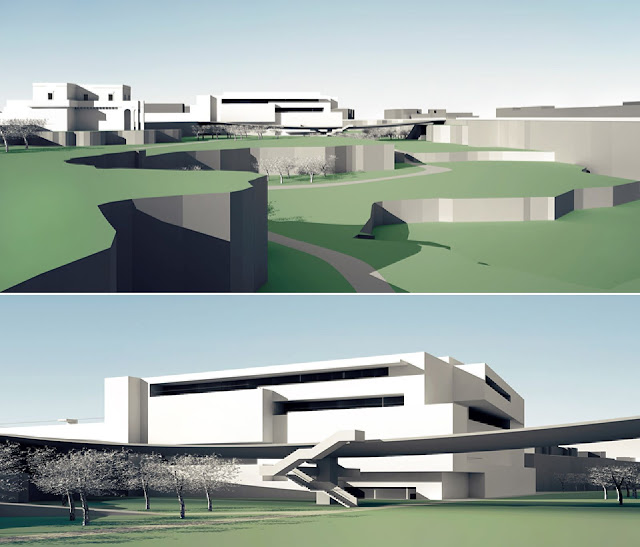 The genius loci, and thus the act of recreating cliff like qualities, is truly what the City of Arts and Music has in common with the bedrocks that surround it. In a way, the architecture turns into the quarry itself by morphologically and functionally mimicking a massive block of stone that works as an innate auditorium for the city. Like a sculptor with marble, Álvaro Siza carved a fully articulated being out of stone, metal and concrete, tellurically anchored to the topography and the bridge, guarding a new urban gateway in the form of a redeveloped train station. 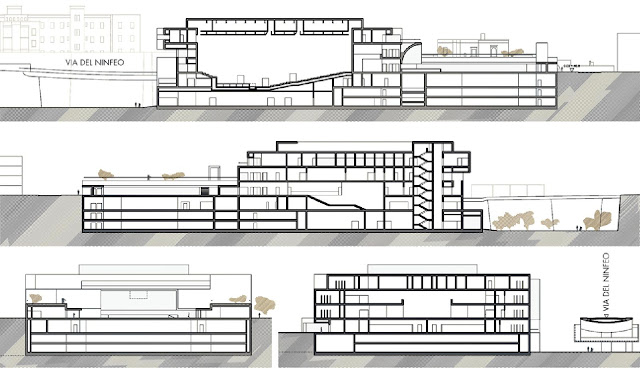 Two very distinct personalities arise from the façades though: the street perspective, where the building resembles accessible and predominantly horizontal, and the park point of view, in which it shifts toward enclosement and vertical layering. Nevertheless, the east and west façades complement this sort of yin-yang paradox, both geometrically and hierarchically, by correspondingly opposing orthogonal/intimate spaces (dressing rooms, rehearsal rooms, administration offices) and oblique/open spaces (bar, restaurant, library). These variations produce an eloquent play of light of shadow on the exterior, as well as emphasize the importance of the main (a)symmetry axis on the interior, at the heart of which lies the concert room. The central placement of the auditorium factored in its acoustic requirements while simultaneously allowing it to interact with four out of the six storeys in the building. 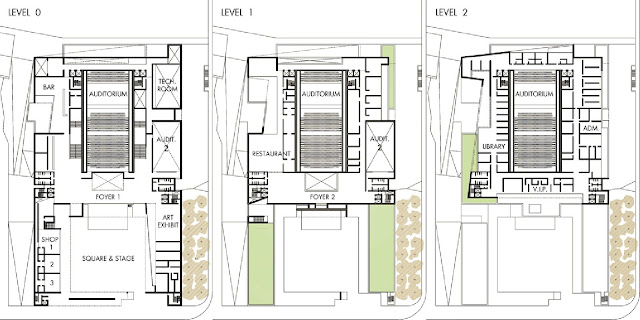 In order to enter the auditorium one needs to pass several levels of privacy, starting off at the most public of places – the street – and walking along the perimeter of a square, compressed in the direction of a foyer than then expands space into the concert hall, through a series of stairs. The secondary auditorium works more as a multipurpose supporting room, in this narrative, especially given that the piazza presents itself as a much larger alternative for concerts and all types of open-air events.
Circling back to the original premise, one could assume that such a square might function as a Forum and in reality it does. It is meant to be a gathering space of great social significance, strategically located at the intersection of an abstract urban cross that revives the archetypal squared shape, transversal to many italian cities. The colonnades may be gone but in its place a cantilevered slab marks the entrance, like a modern portico that articulates a covered walkway throughout the exhibition area and the different shops. 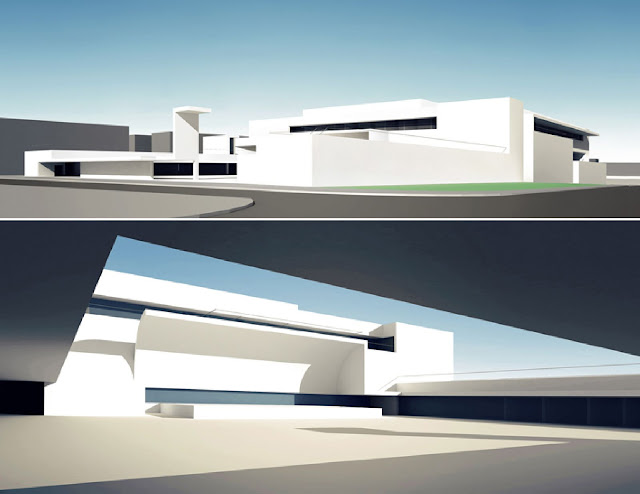 Above the volumes flanking the square, accessible roof-gardens relate to the terraces in the park and allow for privileged views of the Masseria Tagliatelle, whose crumbling archway may or may not have influenced the vaulted composition of the outside stage. Either way, more than a simple acoustic canopy or evocation, that architectural gesture is the formal distillation of a crucial dialogue between the foyer, the stage and the square, balancing the angular structure of the complex for technical and aesthetic reasons. This syllogistic duality, regardless of interpretations on organic lyricism, is in a sense a reflection of the territory’s own character, since the project is fundamentally about the quarry’s two contradicting yet complementary qualities: timeless rigor and a wide range of expression.
The first phase of construction has already began requalifying the urban landscape of the former quarries and the completion of the whole intervention will most certainly broaden Lecce’s architectural appeal for 2019’s European Capital of Culture, highlighting its rich heritage through the unmistakable lens of Siza’s work.
Location: Lecce, Italy
Architect: Álvaro Siza Vieira
Project Team: Carlos Castanheira, Luigi Gallo, Dalila Gomes, Pedro Carvalho, João Figueiredo, Sofia Santos, Paolo Moraschi
Landscape Architect: Luís Guedes de Carvalho
Cost: 55,000,000 €
Project Year: 2010
Client: Municipality of Lecce
International Competition: 1st Place
Text: António Choupina, Arch.
40.343011618.1637294