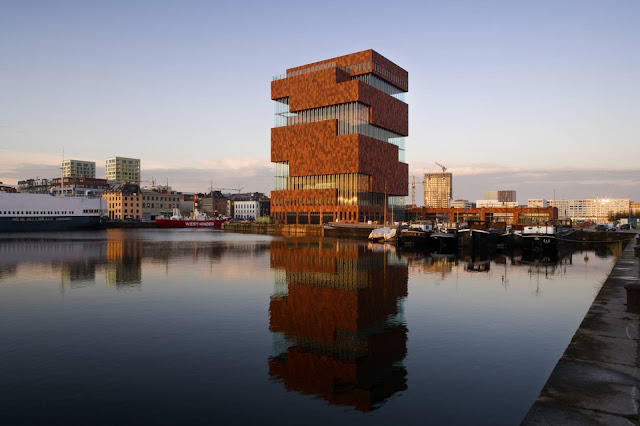 The Museum Aan de Stroom (MAS) is between the old docks in the heart of “Het Eilandje”. This old port area is the major urban renewal project in the center of Antwerp and is developing as a vibrant new city district. 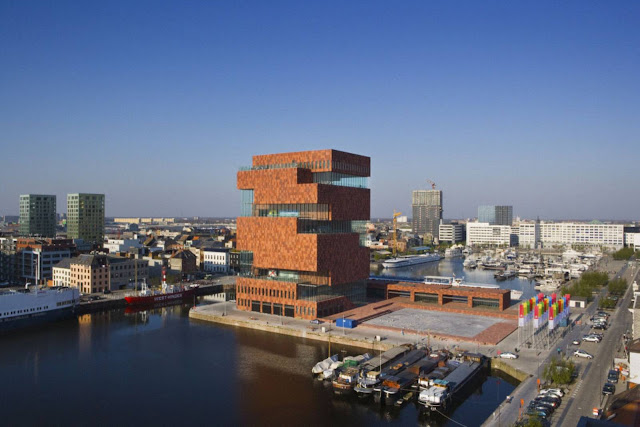 The MAS is designed as a sixty-meter-high tower. Ten gigantic natural stone boxes are piled up as a physical demonstration of the gravity of history, full of historical objects that our ancestors left behind. 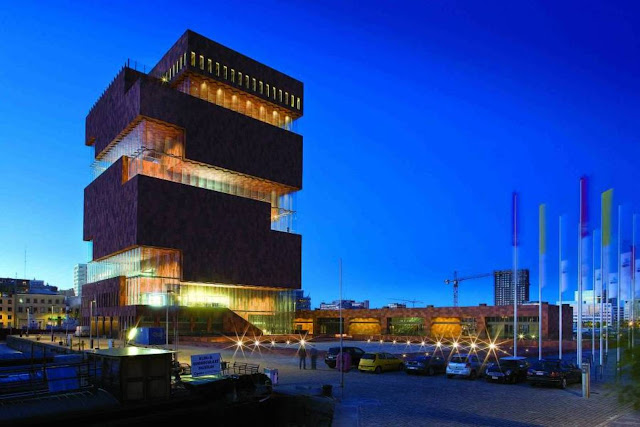 It is a storehouse of history in the heart of the old docks. Each floor of the tower is twisted a quarter turn, so that creates a huge spiral staircase. This spiral space, which is bordered by a wall of corrugated glass, is a public city gallery. 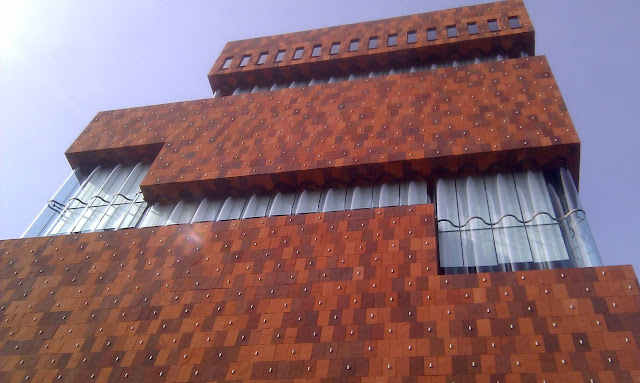 A route of escalators carry visitors up from the square to the top of the tower. The spiral tower tells the story of the city, its port, and its inhabitants. 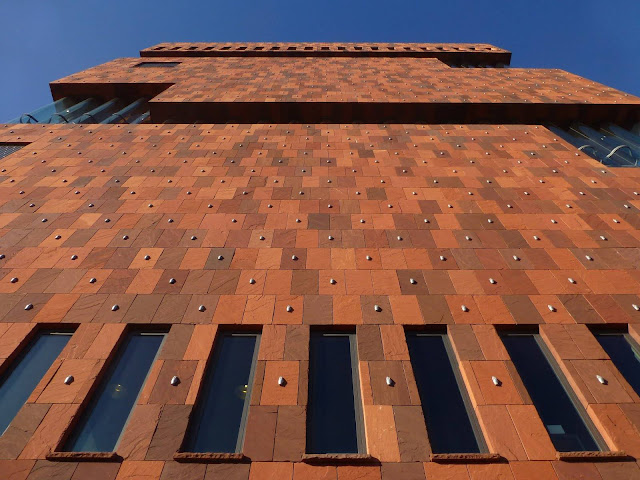 At each floor the visitor can enter the museum hall and go into the history of the dead city, while on his way to top breathtaking panoramas of the living city itself unfolds. At the top of the tower are a restaurant, a party room and a panoramic terrace, where the present is celebrated and the future planned. 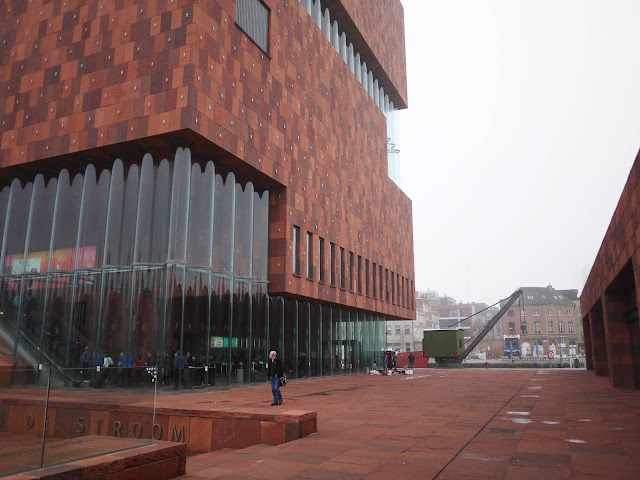 Façades, floors, walls and ceilings of the tower were completely covered with large slabs of red Indian sandstone hand cleaved, making the image of a monumental stone sculpture. The four colors of the stone slabs based on a computerized pattern are dividend on the façade. 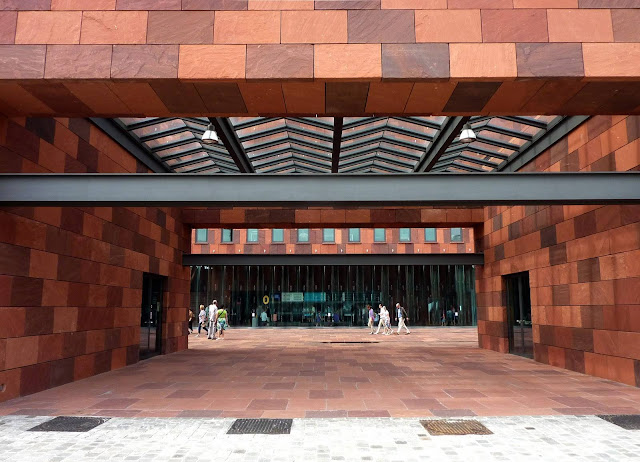 The spiral gallery is lined with a huge curtain of corrugated glass. With its play of light and shadow, transparency and translucency of the undulating glass façade brings a light-hearted counterweight to the gravity of the stone sculpture. 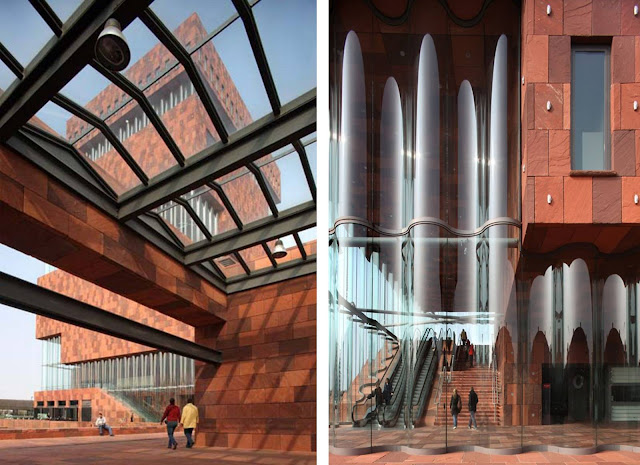 To soften the monumental tower volume a pattern of metal ornaments has been put like a veil over the façade. The ornaments are shaped like hands, the logo of the City of Antwerp. Inside the building, this pattern continued through metal medallions, molded by a design of Tom Hautekiet with a text of Tom Lanoye. 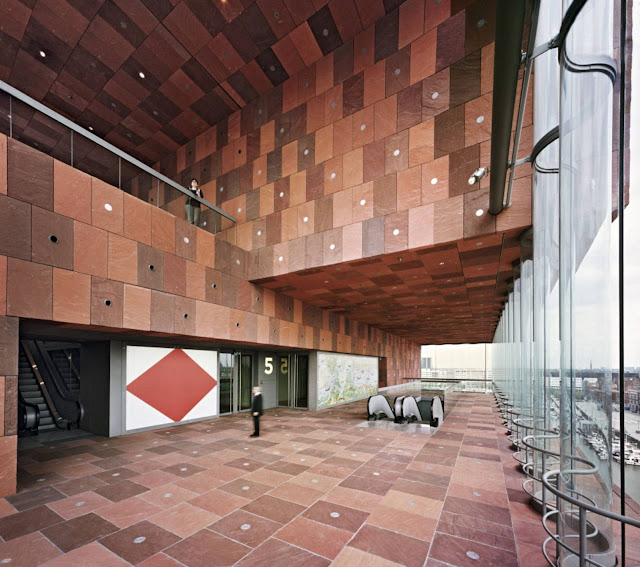 The Museum square at the foot of the tower is an integral part of the design. The square is decorated in the same red stone as the tower and surrounded by pavilions and terraces, as an urban space for events and outdoor exhibitions. 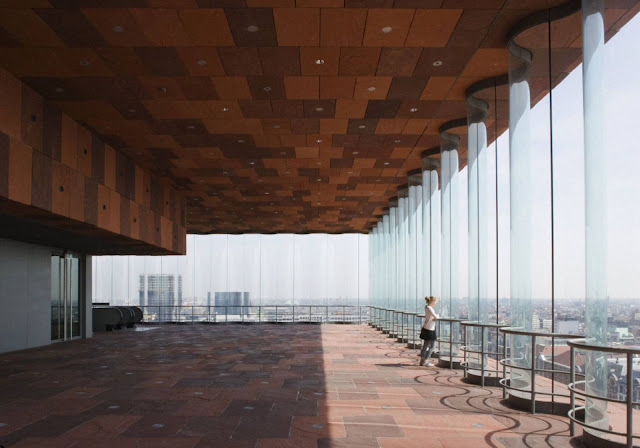 The central part of the square is half sunken and forms a framework for a large mosaic of Luc Tuymans.