The project is a result of Octapharmas rapid expansion and need for increased capacity, including office spaces, scientific laboratories as well as factory and production spaces within its premises in Western Kungsholmen.

The former brewery, together with its surrounding facilities, was in 2009 bought from Index Estate by Octapharma and the company has since strived to improve logistics on site. First built in the early 1890s, the brewery peaked during a 15 year period but soon faced economic difficulties and bankruptcy.

The building has since been used in various ways, slowly falling into disrepair due to neglect. It has however, more recently been protected for its historic and cultural importance and is currently a listed building.

The original construction is mixed but consists largely of wood, something which makes it little suited for production of medicine and drugs. Instead, Octapharma made the decision to have the building transformed for administrative purposes, relocating its Nordic headquarters.

In addition to offices, the transformed building now houses functions such as meeting spaces, conference rooms, changing rooms, storage as well as a large canteen. Together with experts in the field and in cooperation with Stockholm’s planning authorities as well as the Stockholm City Museum, Joliark has carefully renovated/transformed the building for its new purposes.

The façade has gone through a total renovation, assessing each brick, with a high level of precision. Throughout the process, the project has gradually been adapted and evolved as the understanding and knowledge of the buildings cultural importance has grown.

With the former brewery now renovated and inhabited, the building has once again regained its original splendour. Source by Joliark. White’s interior design brings out the story from a time when beer was brewed in large copper vessels, and puts it in living contrast to the modern bright offices.

New functions and needs are elegantly and tastefully incorporated into the old building’s powerful volumes, with a system of exposed wooden beams and plastered stonewalls. Materials and furniture are carefully chosen to harmonize with the character of the building, as well as the core of Octapharma: Swedish, familyowned and global.

Copper, limestone and pine floors, combined with timeless furniture classics, create a calm and solid whole. Everything is thoroughly designed and elaborately selected, from the embossed leather desk pads to the copper‐clad boxes that function as meeting rooms.

In the Bistro, perhaps the brewery’s most beautiful room, one sits down under the tree crowns of wooden beams to enjoy locally produced and carefully cooked meals. Octapharma’s new Nordic headquarters in the brewery meet the global business, with focus on life, people and its Swedish roots. Source by White architects. 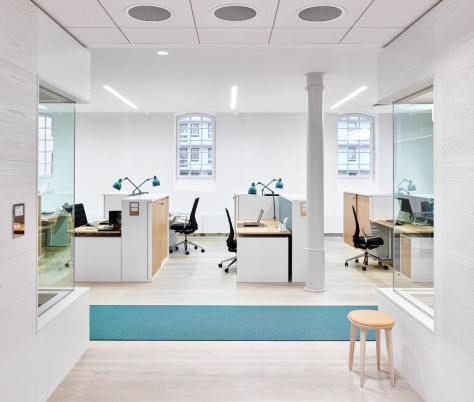