From base to apex, the structure will offer a natural ecosystem, covered by plants and greenery, inhabited by hundreds of animal species, and criss-crossed with a delicate latticework of transportation lines. “Imagine you take New York’s Central Park, turn it vertical, roll it and twirl it”, says Professor Carlo Ratti, founder of the design office CRA and Director of the MIT Senseable City Lab.

To achieve The Mile’s exceptional height, an engineering study led by schlaich bergermann partner, one of the world’s leading engineering firm, was developed to implement a groundbreaking lightweight structure, based on a structural, 20-meter-wide shaft, kept in compression and secured through a net of pre-stressed cables. All around the shaft, a series of orbiting capsules will allow visitors to gradually ascend to the top, enjoying the spectacular panorama at different speeds and approaches.

“The architectural form and the spatial equilibrium of forces become one and the same thing. On the one hand, this leads to an optimized usage of high-grade materials. On the other hand, the structural form and load paths become intuitively comprehensible by every spectator” says Boris Reyher, Associate and team leader at schlaich bergermann partner.

The Mile’s financial model is based on the examples of successful structures such as Paris’ Tour Eiffel, or The London Eye, both earning tens of millions of dollars in profits each year. The general concept of a one-mile vertical park, featuring an extraordinary constellation of Sky decks, forecasts substantial profits, especially for cities that draw large numbers of tourists.

The visitor’s experience of the Vertical Park will be varied and engaging. The ascent to the observation decks will utilise orbiting sculptural capsules, which can host meetings, dinners, concerts, or even pools – allowing people to inhabit the sky in unprecedented ways. The capsules will be equipped with open-air Virtual Reality screens, permitting an interaction with the 360-degree view over the landscape. Aloft in the sky, visitors can see the city as is – or could be, unencumbered by headsets that typically accompany VR.

“In order to change an existing paradigm you do not struggle to try and change the problematic model. You create a new model and make the old one obsolete”, the great 20th-century American author and thinker Richard Buckminster Fuller once said. Inspired by his visions, the Mile not only addresses mankind’s timeless quest for vertical elevation; it also tackles our need to look at the world from different perspectives.Source by Carlo Ratti Associati. 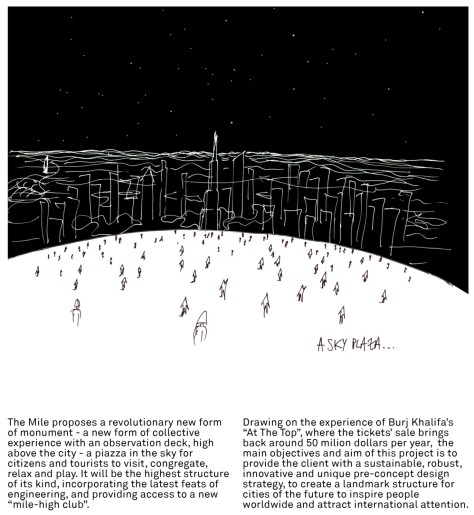