The design of the new student housing for the University of Southern Denmark in Odense is based on a strong community spirit. The 250 student residences are located in three interconnected 15-storey buildings. This means that the residence has no front or back, but appears attractive from a 360-degree perspective.

The building’s distinctive shape will make it easily recognizable on the campus, and clearly advertises its distinct residential content. The project constitutes a link between the 1966 linear university campus and the new Cortex Park, a Research and Knowledge Park designed by C.F. Møller in 2009 as a more irregular and dense urban cluster.

The university’s clear structure is also an inspiration for the student residence: with its layout centred on common spaces on all floors, the new building reinterprets the existing university’s manageable and human-scaled campus laid out around common environments – a sort of vertical campus. The site’s terrain slopes gently towards an elongated wetland to the south and the residential building becomes part of the science park structure.

The three towers,forming a clear landmark on the development’s eastern end, are rotated relative to each other, inscribing them in faceted angles of the science park, while the direction of the front plaza uniting the towers refers to the linear modernism of the university campus. The dorm rooms are located on the outer faces of the three towers, where they all enjoy views of the countryside without overlooking neighbouring rooms, due to the building’s turns and twists.

Each room has a private balcony, which both helps make the homes attractive, but also has an environmental function: The shading internal balconies help manage solar gain, contributing to significant energy savings. Moving inwards from the private rooms towards the communal kitchen in the centre, areas gradually become more and more collective: A shared living room acts as a social meeting place for the small cluster of seven rooms, which all residences are grouped in, and as a transition to the fully communal spaces.

The kitchens at the centre of each floor are shared by all, and feature generous glazed facades that ensure light and views in three directions. The common areas are not only present on the residential floors: The Campus Hall also features a ground floor café as well as group rooms, study areas and party spaces on the top floors, with roof terraces on several levels enjoying a magnificent view of the city and university.

The shared areas are carefully graded from small and intimate communities to larger rooms for big occasions, to establish a balance between the common and the need for privacy. The Campus Hall is a low-energy construction made from quality materials that meets the strict Danish codes for low-energy class 2020 and gives priority to public transport and cycling – a bike for each resident is provided.

The building’s overall energy concept is based on the optimization of passive design parameters such as shape, orientation, adaptation to climatic conditions, daylighting, ceiling heights and structural thermal mass, as well as a highly insulated and airtight building envelope, use of natural cross-ventilation, and extensive heat recovery from exhaust air, waste water and showers.

Despite its unique height, the student housing blends organically into the surrounding protected forest landscape, with its own park and small lake. The surrounding landscape is designed in accordance with principles of sustainable use of resources, where soil balance, precipitation and wildlife habitats are considered in a recreational hierarchy of managed areas and wild nature.

A series of precisely defined plots constitute activity areas and multifunctional garden spaces with features such as volleyball courts and sitting steps. They are distributed in proximity of the building, interspersed by nature with wetlands and reeds, and linked by a network of paths, which allow the rest of the Science Park and the University to experience the residence’s lush garden. Source by C.F. Møller. 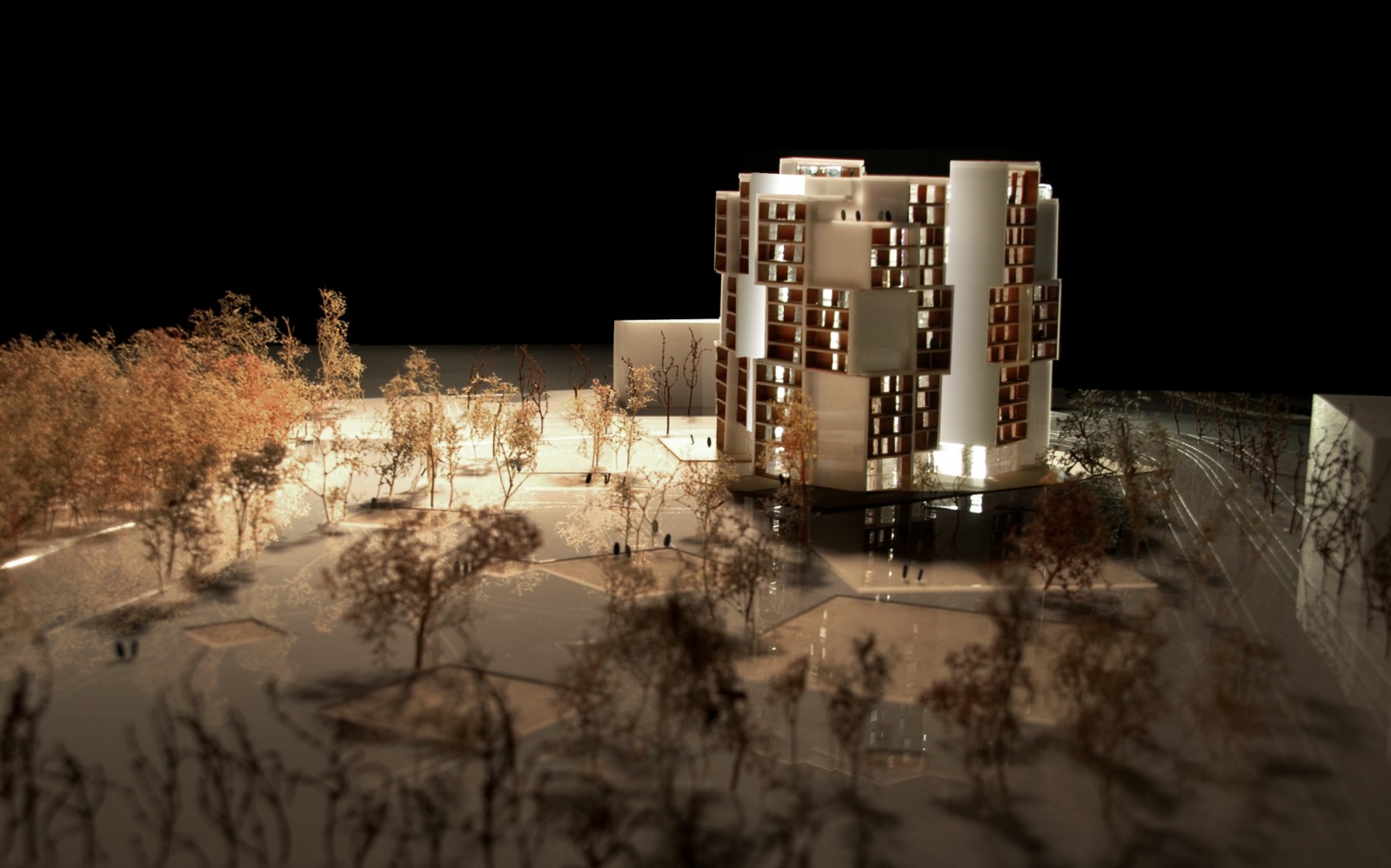 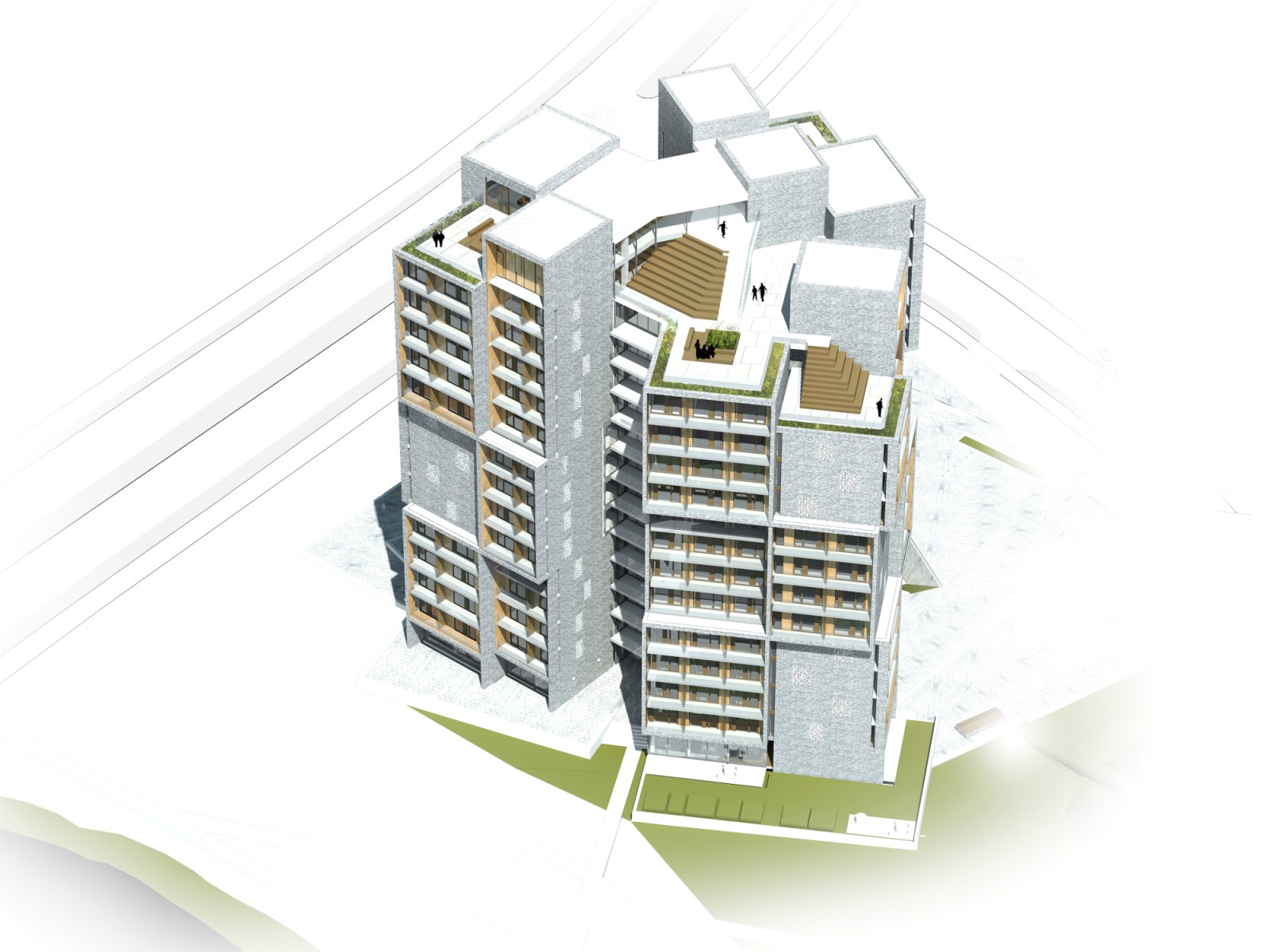