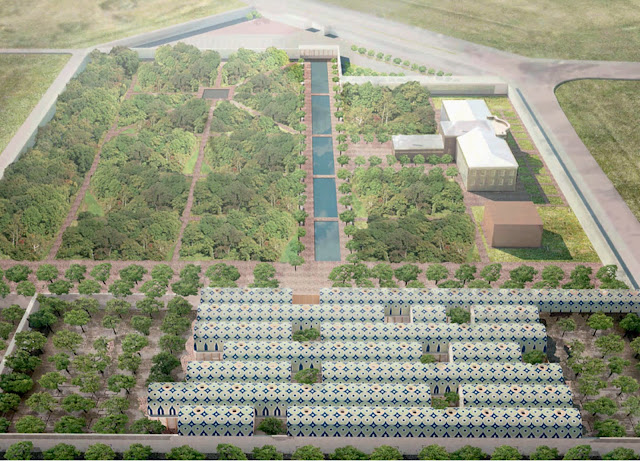 “The idea is to help people to relate to architecture, help architecture to relate to people and help people to relate between them.” The architectural design, whether in a close or a distant physically and culturally environment, always involves a creative leap that is based on an interpretation of reality, is always subjective and derived from the rational and aesthetic experience of the places in its complexity and temporality. Our project is based on a theoretical assumption not intend to be characterized as “truth”, but that is the basis for making a series of design decisions that end up generating a coherent building and as beautiful as possible. 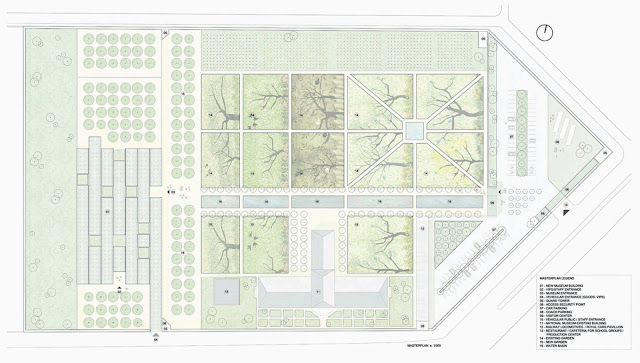 The first projecting part of overcoming the dichotomy between geometry and organic that is stated in Islamic architecture. A dichotomy in which the higher mental-construction geometry-imposed with authority to the chaos of the inhospitable and irreducible nature. Overcoming this dichotomy means using geometry to sort programs, applications, things with a method. But it also means leaving space for freedom and surprise, incorporating chance. We propose a project in which the organic and mutable nature finds its place in the geometric order. The geometry does not produce an inert space, but also guarantees the conditions for the organic develop, live, reproduce and die, in a supportive environment. Oasis, gardens, patios, planters … is the way in which our culture has tried to preserve life against the aggressions (wind, sun, drought …). 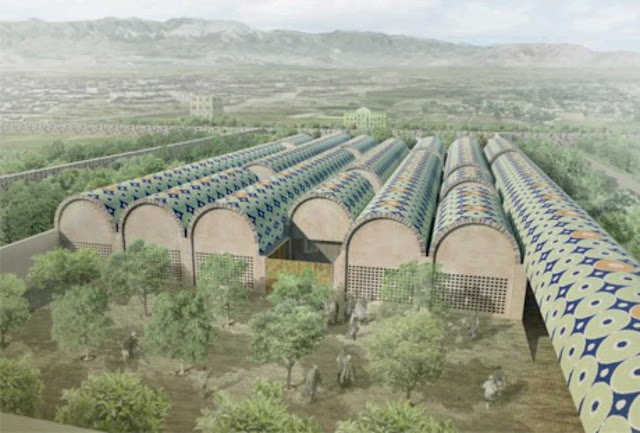 Our building is to do the same. The building is recognized as a closed universe inside a wall, which in this case is justified for security reasons, but also its reason for being in the will of nature protection in a harsh and inhospitable. This “pre-existing” perimeter support the vaulted roofs that generate a continuous isotropic space. The domed structure introduces a clear directionality allowing versatility in the longitudinal direction of the building. In this space a priori spatially homogeneous differ by entering certain areas of domes and courtyards. These domes slow down and focus the tour, introducing the vertical and “heaven” in the building.

The courtyards extend the visual and introduce controlled natural light into the building. Domes, water and vegetation introduce a visual dimension of infinite perspective that transcends the finiteness of the materiality of the building. This will not limit the look and suggest an infinite sequence of planes (either the sky with its stars, or the orchard, the garden, with its succession of layers of vegetation crossed by light) are at the origin of the lattice and mosaic.

This fundamental Islamic design element of architectural tradition, in which the wall is not an element … is an opaque veil that suggests an infinite dimension in which the eye is lost, the light is screened, the stars are drawn and the imagination takes paths that are never the same. The perimeter walls are dematerialized and become shutters that filter and regulate the entry of light. The movement of people inside the building is a elapse reason for an exhibition that its presented in an chronological line, in which spaces and pieces are single out that advertise and stop the path at times. 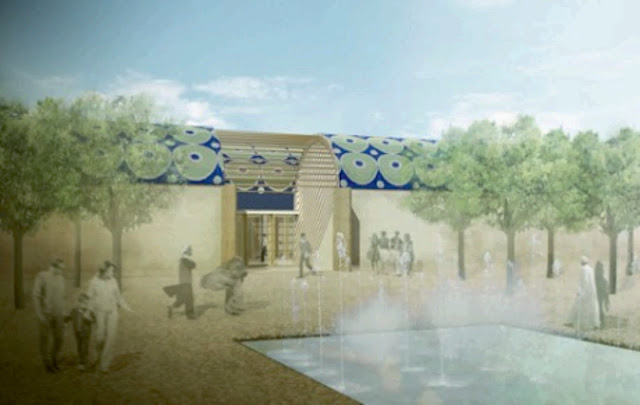 The light is controlled, filtered and diffused. A Look inside, diffused and screened. The architecture builds from within an entire landscape. The nature is abstract, it is garden and courtyard ago, and the sky is evoked in the perfect geometry of the infinite which is the dome. The furniture exhibition is part of the building structure. Furniture, architecture and exhibition systems are treated in continuity to make the supports invisible and versatile, so that parts can be provided with minimal visual interference possible. The close relationship between architecture and media exhibition allows us to most efficiently integrate the necessary facilities. The isotropic lattice structure gives us, at bottom, maximum versatility exhibition as possible.

The exhibition spaces are raised primarily on the basis of a system of perimeter windows whose section is adapted based on the parts to be expose. We propose to single out the most important pieces giving them a central position and the special exhibition that requires treatment. The internal working spaces are placed on the same floor of the exhibition space. Warehouses and storage spaces are located in the basement, in which the insulation and thermal control and lighting are stricter. These areas remain natural lighting through the courts.

The enclosing wall perimeter of the plot is an element of a dimension and important presence. This wall responds to a very severe safety requirements that can not be avoided. So on its outer face is treated as a clearly solid and impassable. On the inside, in the view from the garden, should be seen as a more visually friendly element to incorporate those qualities of which we spoke when we described the lattice. In that sense the inner surface arise as a wall of changing vegetation and allows to be visually incorporated into the garden and not perceived as a clear boundary, resounding and impassable. 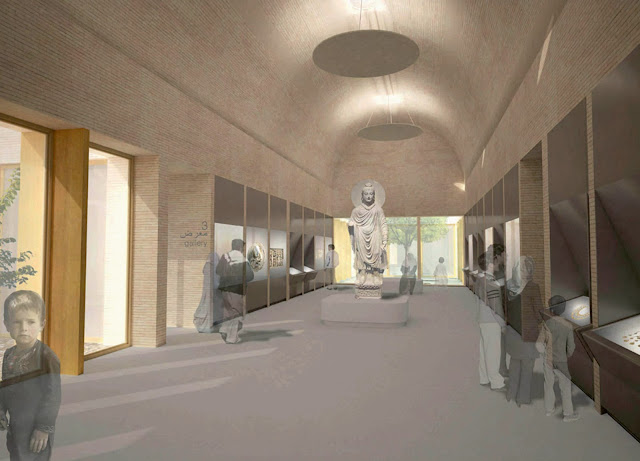 The garden is a fundamental part of our project even if the intervention is of low intensity. We propose to keep the foliage trying to recapture the spirit of the legendary Mughal gardens. We introduce a new line of direction that prioritizes access to the new building and allows good access to the old. In the gateway, which is a broad transition threshold between the exterior and interior, the visitors centre is located. The space of “courtyard” in front of the museum is actually building the first space of the museum and we believe it should be understood as an active part of it. 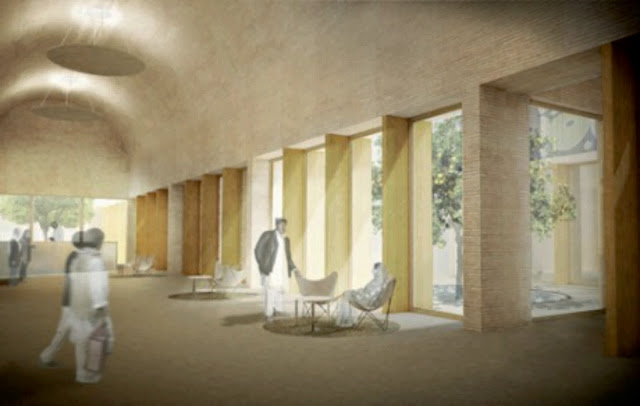 This garden is like the “Patio de los Naranjos” of the Mosque of Cordoba, the prelude to the mosque. It is actually the mosque, but without cover. For us, this space is similar: an outdoor urban space, geometrized, rule, guidelines and articles. A place where the visitor, which comes from “outside” world prepares to enter a place that requires a different attitude. Description of Architects. 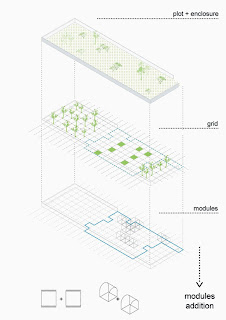 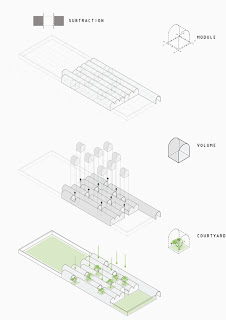 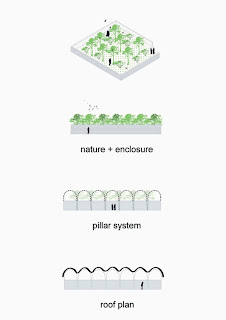 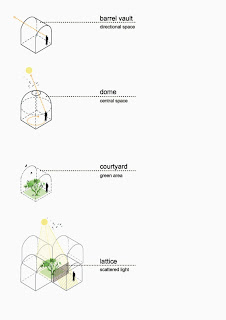