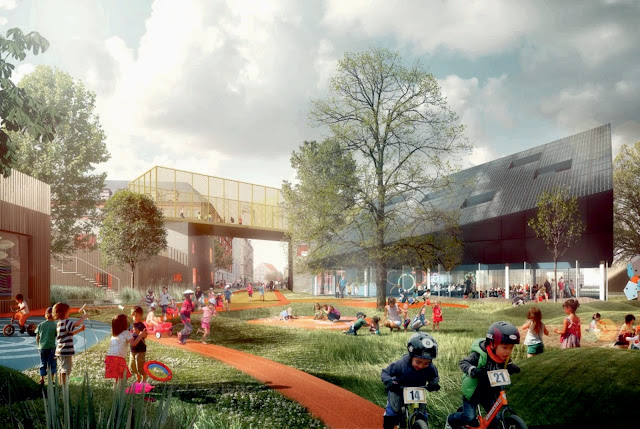 “NORD Architects, COBE, PK3 and Grontmij are announched as winners of the competition to design a new kindergarden in Copenhagen for 618 children. The site is in central Copenhagen next to Christiania on Christianshavn. The project can be found under featured projects. 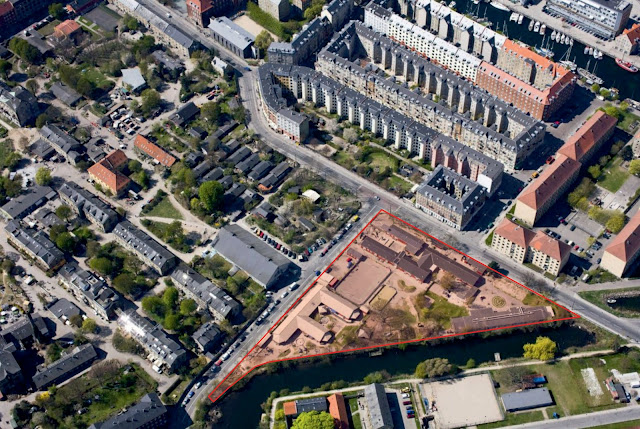 The complex “Prinsessegade Kindergarden and Youth Club” in the heart of Copenhagen wil be second home to 618 children and young people. Completion is scheduled for the end of 2014. In a very flexible scheme the winning entry proposes a new norm for how the future welfare system of Denmark can embark on the challenges of a growing capital. 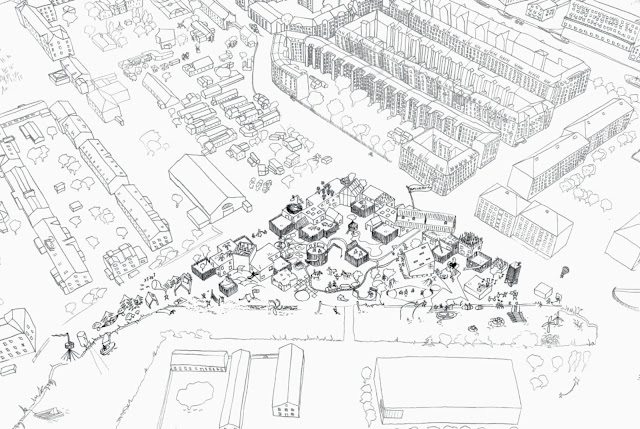 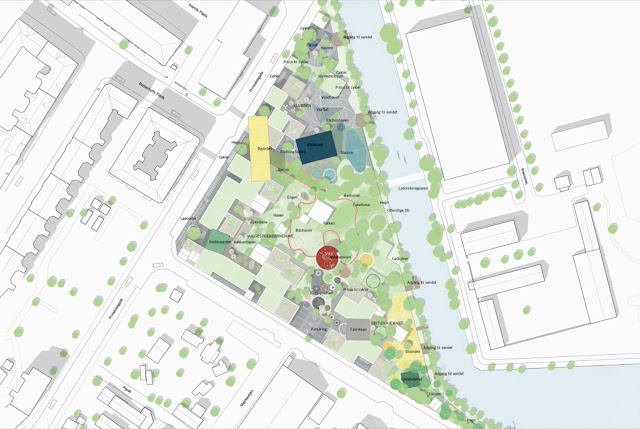 The site – a triangular plot in the Copenhagen borough of Christianshavn, wedged between the rigid urban block structure of Prinsessegade and the homegrown diversity of the Christiania Free Town – has been chosen as the frame of the good everyday life of 618 children and young people between age 0-18. 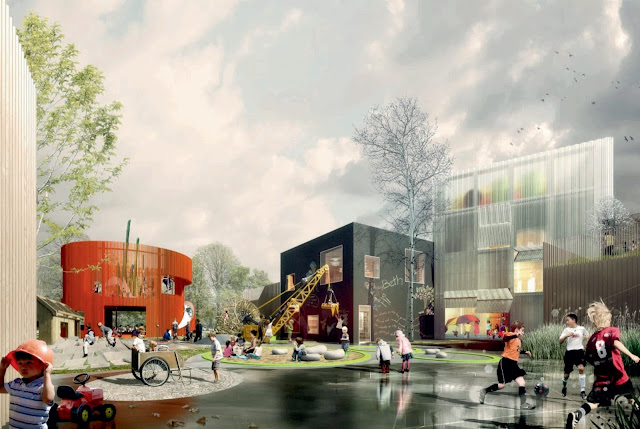 This makes the project the largest daycare center in all of Denmark! It also presents a big challenge – how do we avoid creating a daycare factory when building an institution for so many users? The daycare center in Prinsessegade is a city for kids! 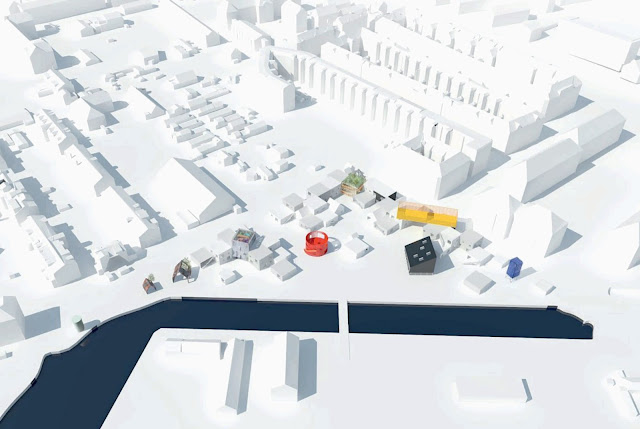 It’s not one huge building but rather a cluster of many small and varied buildings, grouped around two central streets that connect to the surrounding city structure. Like Copenhagen, the Kids’ City has different neighbourhoods, different houses, different public spaces, squares and parks. 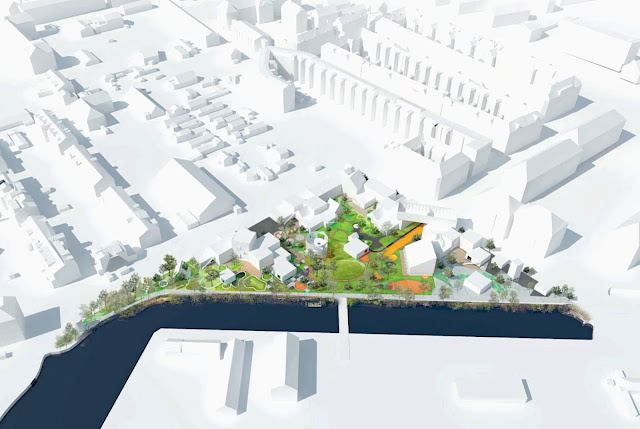 It even has a city hall, a fire station, a restaurant, a stadium, a factory and a golden ballcage on the roof. Most buildings consist of a general city mass, based on a rational, modular construction system, while the special buildings of the city stand out both in terms of function and architecture. 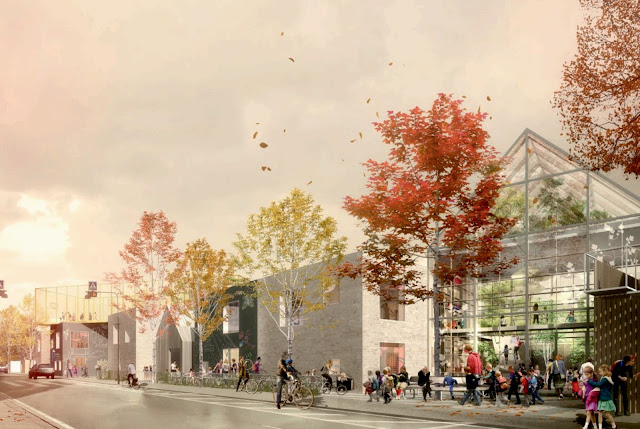 The Kids’ City is planned from a careful analysis of the site’s existing landscape, in order to emphasize and preserve as many of the present qualities as possible. The buildings are placed in such a way that the largest trees and most important landscape elements are preserved and incorporated into a large, green shared outside area – the heart of the Kids’ City. 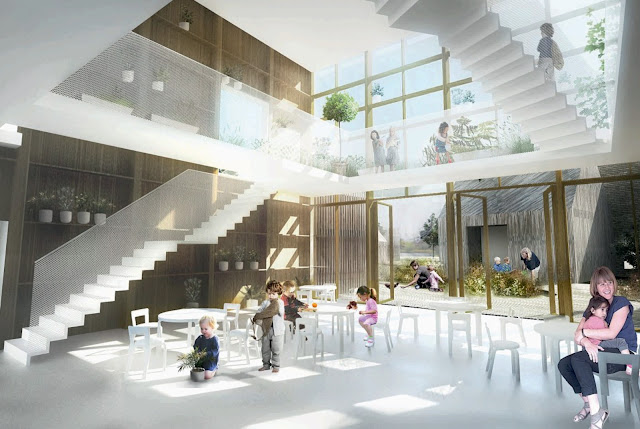 In addition to this, many new landscape elements, such as the city hall square and the beach, add diversity to the site’s existing qualities and allow many new outdoor activities and experiences. The size and diversity of the Kids’ City means that everybody – children and young people as well as their parents – will feel at home. 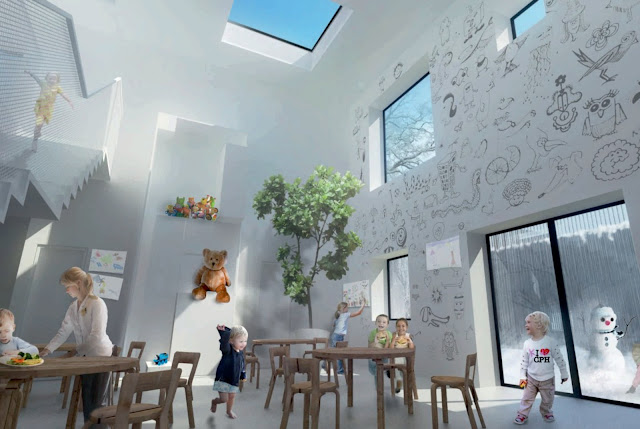 Sustainable solutions, materials and architectural solutions all point towards quality of space and underline the content of the new kindergarden, afterschool club and youth club.“ Desciption from Architects.