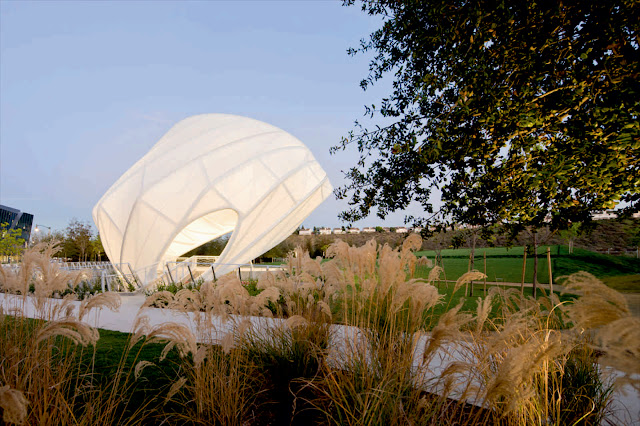 “The 8-acre Playa Vista Park provides an infrastructure of recreation and performance spaces to support expansive experience of public space in our city. 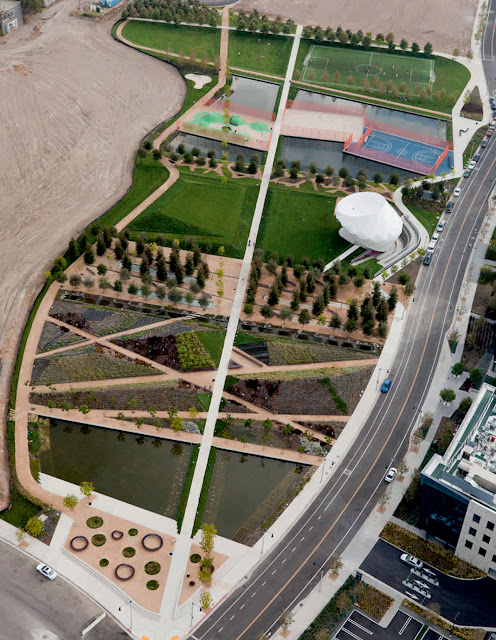 Located at the eastern terminus of one of the largest infill urban developments in the United States, the Park creates a flexible campus that links and expands the surrounding context of the office park. 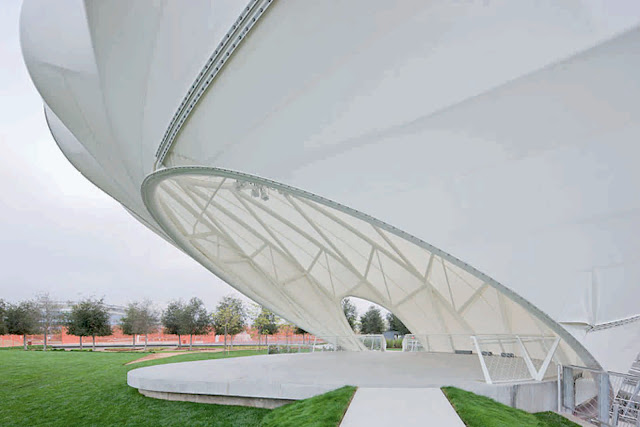 CONNECTING THE PARK AND ITS CONTEXT
Defined as a series of bands which extend across its length, the Park physically and programmatically links offices to the north and south. Each of these bridges spans series of ponds and figuratively connects the surrounding context with the long bosques of alders, elms, and pines. 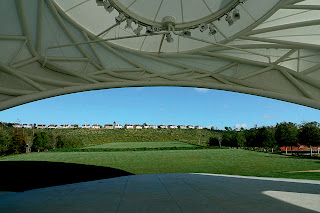 These tree-lined rooms, defined through their spatial characteristics, form a range of experiences through which visitors can traverse, short-cut across a single bridge, or navigate at random. 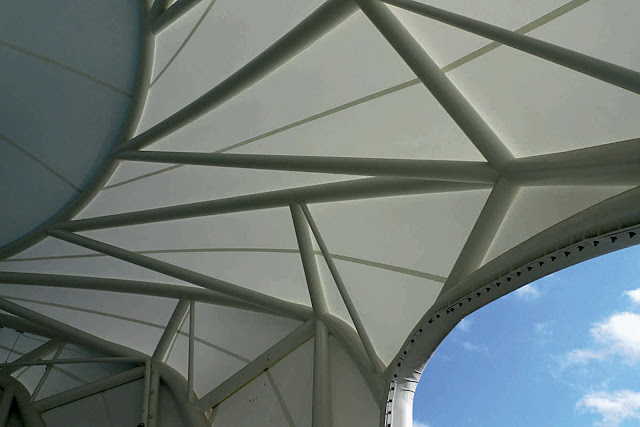 BRIDGING A RANGE OF ACTIVITY
The Park is not a mimetic representation of nature, but is instead defined by activity, utility, and performance. Rather than creating a series of static scenes in relationship to a fixed linear narrative, the Park encourages a multiplicity of simultaneous itineraries, experiences, and encounters through its function and form. 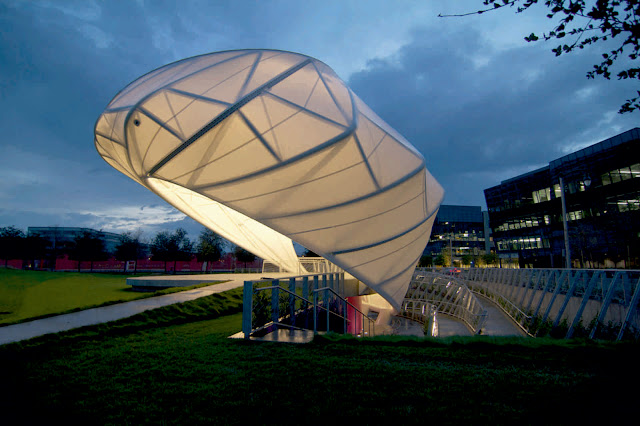 Soccer fields and basketball courts to the west, and amphitheater lawn and woodlands for gathering and relaxation to the east, extend the program areas to the street edge. 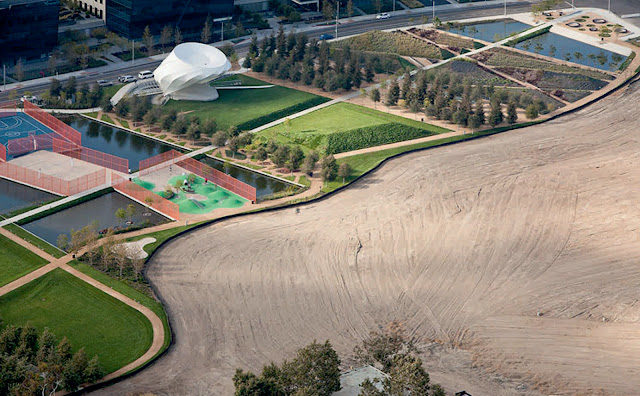 ACCESS AND VISUAL CONNECTIONS
Along its central axis, a single path connects entry plazas at the Park’s east and west edges, uniting it in a single perspective. Echoing the historic Howard Hughes runway which once crossed the site, this trajectory is further defined by elongated stripes of color and light, visible not only within the Park but also to aircraft landing at the nearby Los Angeles International Airport. 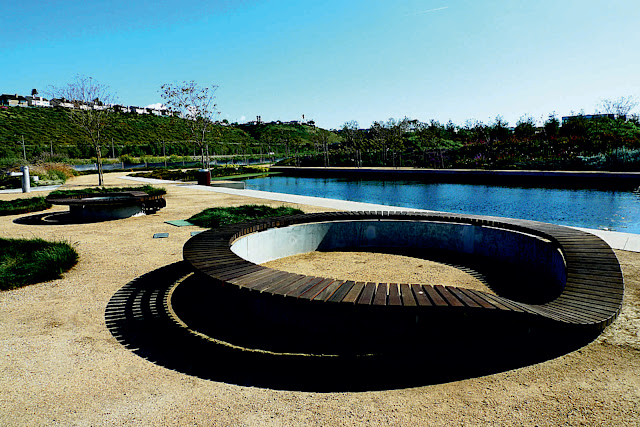 Long allées of jacarandas crisscross the Park from east to west, blooming in the spring and early summer to create strong unifying bands of color. The Park is akin to a campus, its tightly integrated network of pathways and programs open and unscripted in access and use. 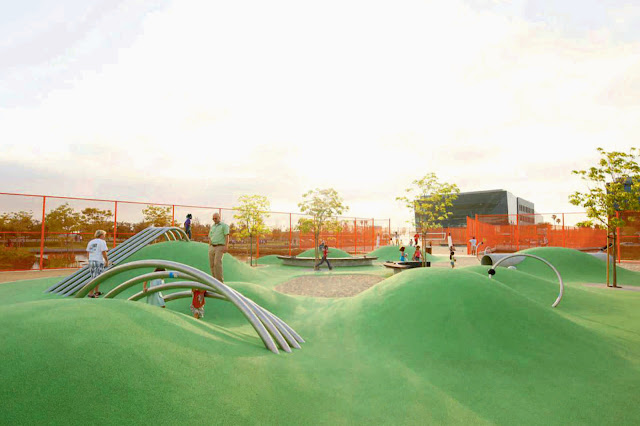 AN ICONIC BANDSHELL
Beyond the courts, a large amphitheater slopes to the north, shaping sight lines to a Bandshell at the Park’s  center. Rising above the park, the Bandshell’s circular iconography is defined by three rings that arc above the pedestrian paths, extending trajectories of movement from the adjacent landscape into its dynamic form. 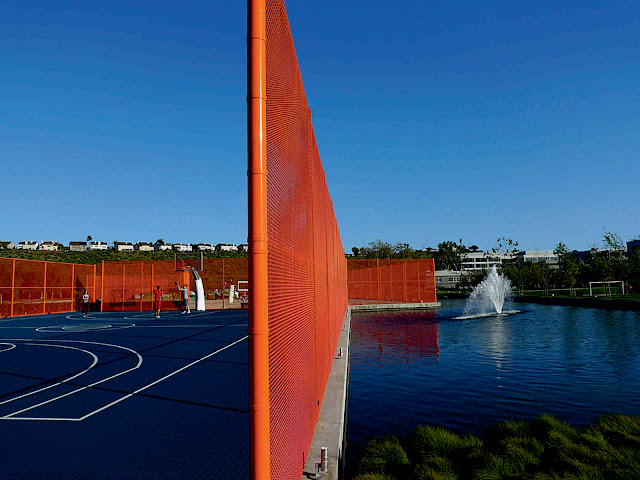 The three steel hoops structure the shell’s envelope, a pleated membrane that floats above the landscape, its glowing form visible throughout the Park and beyond as day gives way to night. 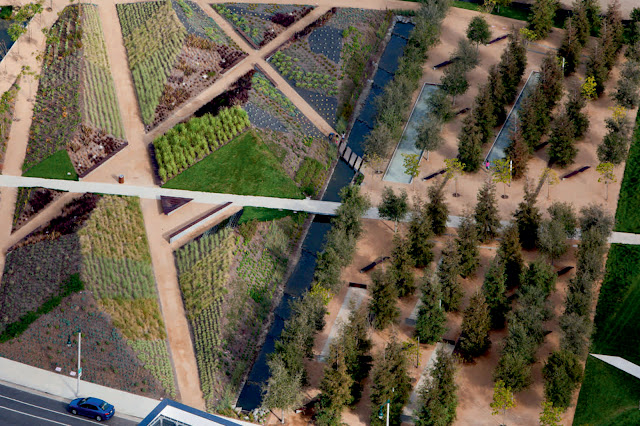 The Bandshell incorporates a flexible lighting grid and an expansive stage which can support a wide range of performances, including theatrical productions, outdoor movies, and concert events.“ Description of the Architects.