Located in Raleigh’s revitalizing Historic Depot District, this historic 1910 two-story brick structure built for Allen Forge & Welding Company and enlarged around 1927 for the Brogden Produce Company — and more recently home to longtime occupant Cal-Tone Paints — has emerged from its asbestos clad sheathing into a new incarnation as the home of Raleigh’s Contemporary Art Museum (CAM).
The Depot District contains Raleigh’s only significant collection of buildings related to the heyday of railroad transportation and shipping in the Capital City. By recycling this important building, CAM preserves an important part of Raleigh’s history and demonstrates its commitment to sustainability and leadership in historic preservation. Equally important to the preservation of the existing structure was the addition of the new 900 square foot entry structure. 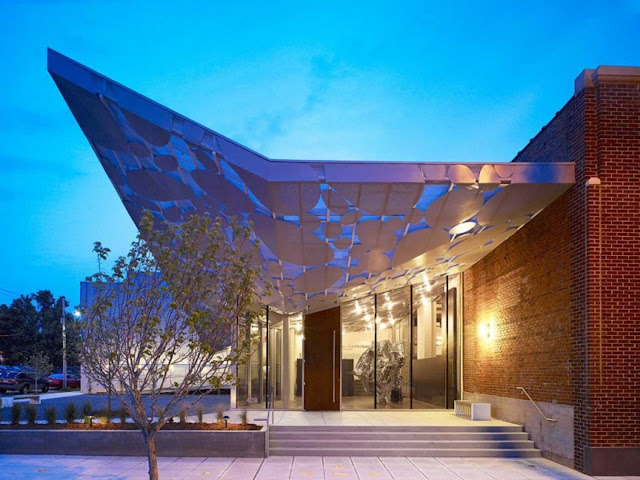 The dramatic lobby is a glass-enclosed space set beneath a spectacular folded-panel roof that extends over the entry’s sculpture garden to form a kind of welcoming front porch. Located on the east side of the existing building, the lobby is a modern re-interpretation of the old loading dock, moving people, goods and art deep into the central core of the main exhibition space. 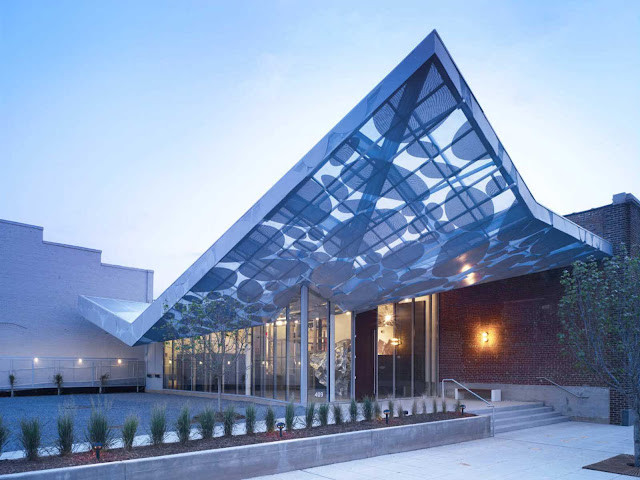 This asymmetrical cross axis was created to juxtapose and complement the symmetry of the old historic building. The two buildings collapse together and fuse into one structure. Old and new become one. The space provokes a kind of indelible wonder while still affording traditional values to the people who visit. 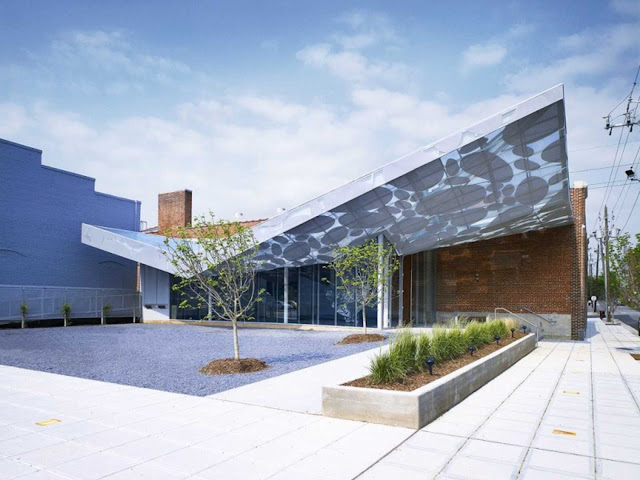 “The building itself is a work of art”, says John Morris, a software engineer, photographer and writer. “It chronicles the solid utility of Raleigh’s red-brick past. It’s an old building with a new purpose, a new interior with a futuristic canopy roof.” 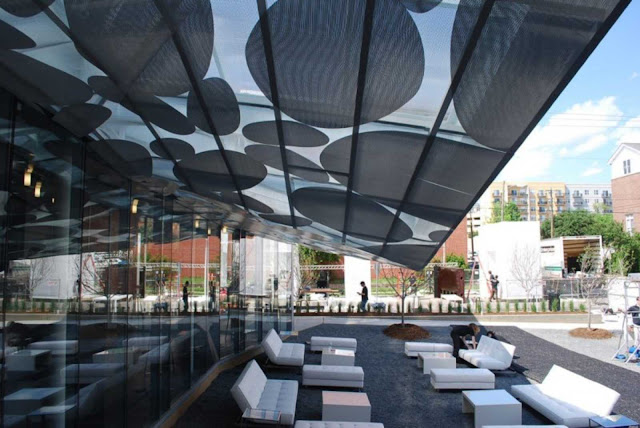 CAM’s director of development, Rosemary Wyche points out that much of the original fabric of the building, a produce warehouse with loading bays for trucks and a connection to a railroad spur, is largely intact, including the original apparatus for the freight elevator visible from the open stair to the museum’s main level. There the Main Gallery is revealed as a dramatic space with tall ceilings with the original metal trusses exposed and a row of porthole-like details that are part of the new ventilation and heating and air conditioning system. 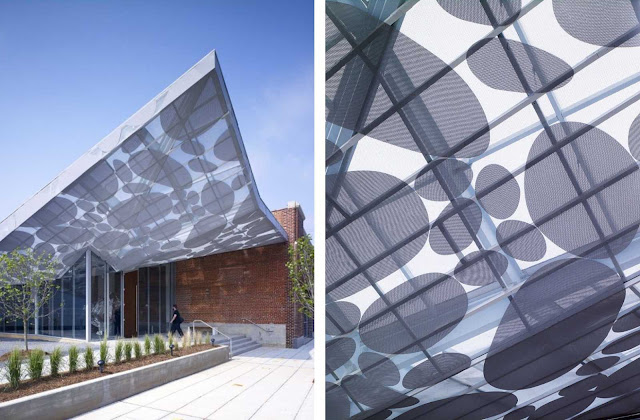 An original lunette window floods the space with light penetrating deep into the new basement gallery cut into the floor below. The lower level gallery’s square cast-in-place masonry columns with distinctive flared capitals and sheared caps have a delicacy of their own to complement to main exhibition space above. The lower level is also home to administrative offices, storage and preparation areas and the catering kitchen. The administrative area is defined by half-walls that give the basement a sense of openness. 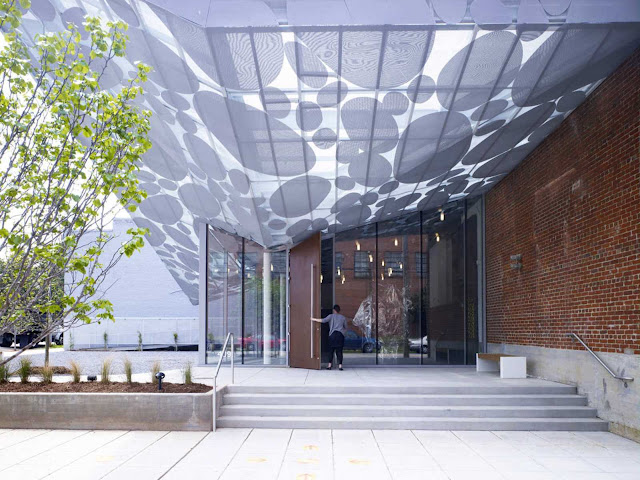 This level also accommodates one more exhibit space, the Media Lab, or Black Box Room, intended to display digital art and other technology. “We have three galleries,” says Wyche. “The Main Gallery is our largest and can accommodate 499 people for a variety of events. A second gallery, the Street Gallery, appropriately named for its proximity to West Martin Street, is located adjacent to the Main Gallery but separated by the intentional slot cut in the concrete floor to create a deep trench to expose the basement level to the main gallery. 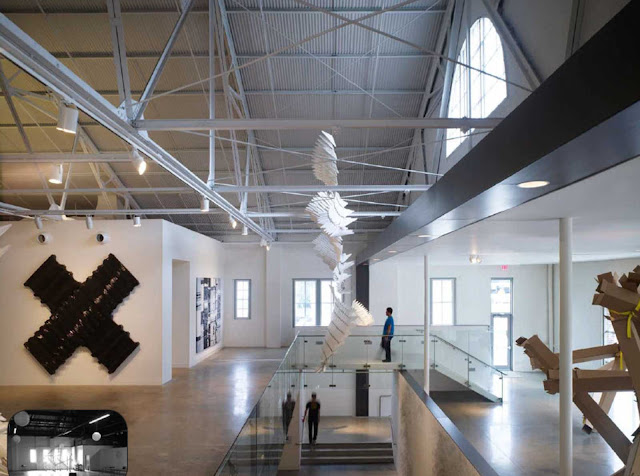 The Street Gallery is accessible by a glass and metal bridge spanning the trench, providing views down into the third gallery below. This allows the basement, traditionally separated from the upper levels, to be visually fused into the gallery space above. Every feature of the building is multivalent and rich with meaning—performing several roles for functional, formal and experiential effect. 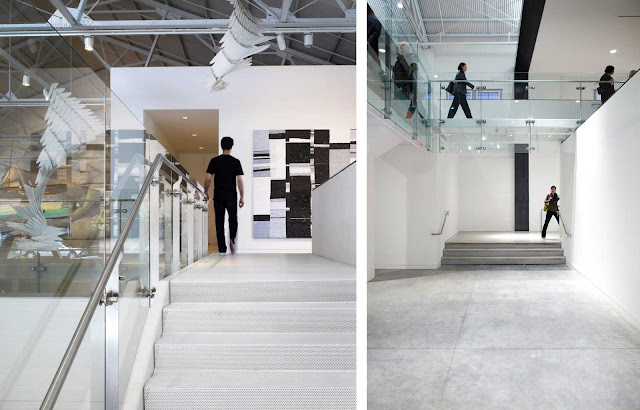 This marriage of the old and new, respect for history, while bringing something entirely new and exciting makes this building inseparable from the history of the region. The emergence of the Brogden Produce Company, from an anonymous asbestos-covered block to a visually exciting and functional art space in the midst of Raleigh’s Depot Historic District, is a remarkable transition. Like the butterfly, CAM is spreading its wings after a long wait.